Vintage hi-fi components may be having a moment, but design-conscious dwellers of contemporary homes likely prefer a sound source that matches the aesthetic of their Miele steam oven and Minotti seating system. If your chic downtown apartment is more sleek finishes than the period wood of my 130-year-old abode, the super-clean look of the Totem Kin Play Tower stereo speaker system ($2250 per system in US or Canadian dollars) will likely appeal to you. My review sample was in the company’s Satin Black finish, and with the grilles removed, the two 5″ soft-dome woofers on each speaker gleamed. Each speaker also has a 1″ soft-dome tweeter.

What might also appeal to forward-thinking buyers is that systems like the Kin Play Tower represent something SoundStage! Audiophile Podcast hosts Dennis Burger and Brent Butterworth recently predicted (around the 30-minute point) might be the future of hi-fi audio: well-made active or powered speaker systems that integrate bespoke amplification, streaming capability, and a phono stage. 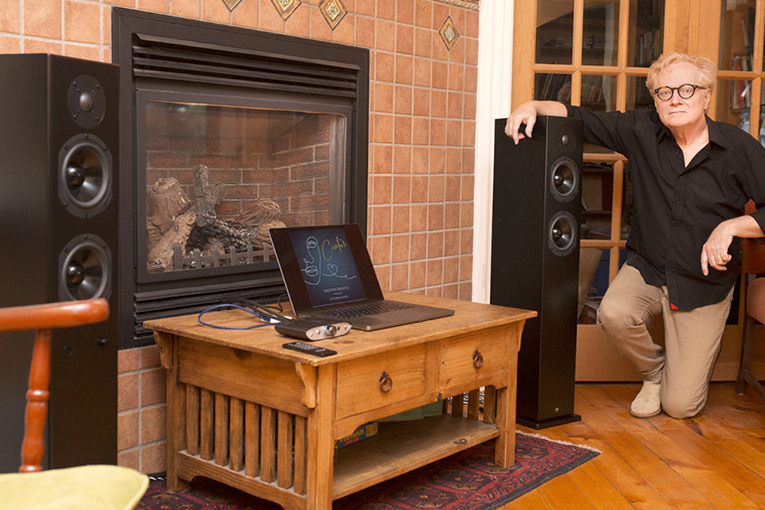 At a combined weight of just over 73 pounds and with each speaker measuring 40″H × 7″W × 10.5″D, the Kin Play Tower system is small enough to fit discreetly into most rooms. As with many active and powered speakers, one of the Kin Play Tower speakers is the workhorse; it houses a 200Wpc amplifier with a claimed frequency response of 30Hz–22kHz (+/-3dB). The primary speaker has a DAC, Bluetooth 5.0 receiver, and moving-magnet phono stage, but the company provides no information about their provenance. This paucity of technical information seems to be in keeping with Totem’s approach to marketing its powered speakers: keep it simple. But, no doubt, some consumers would prefer more details.

The passive secondary speaker is connected to the primary via 16′ of 16-gauge, 19-strand cable, terminated with banana plugs; it’s included with the system. Aside from termination posts for that cable, the rear of the primary speaker has a pair of RCA inputs that is switchable between line level and phono; a 3.5mm input that bypasses the internal amplifier; a line-level 3.5mm input; two S/PDIF optical (TosLink) inputs; a single-ended RCA sub out; a ground post for use with the phono stage; and an IEC power inlet. 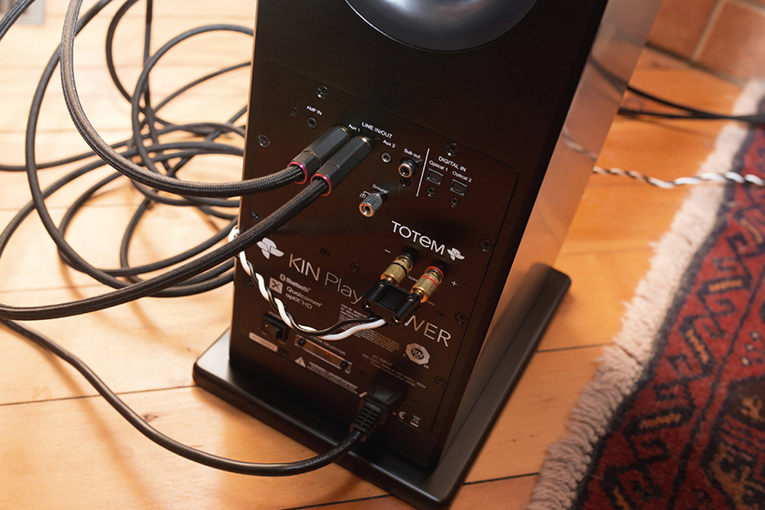 Unfortunately, one thing the Kin Play Tower lacks is a USB input that would enable me to play lossless digital music files like my 24-bit/44.1kHz WAV prerelease review copy of Dafnis Prieto’s Cantar (Dafnison Music) without relying on Apple’s abysmal headphone DAC in my MacBook Pro. Consequently, I pressed my iFi Audio Zen DAC V2 into service and ran a pair of RCA cables to the primary speaker. I couldn’t help but notice that the Kin Play Tower suddenly looked a bit less futuristic with those extra cables snaking across the floor.

My choice of music to pair with this contemporary stereo system stemmed from imagining the mood that someone lounging on the Minotti seating system in their urban condo might want to set, and my selection got a synchronistic boost from Dennis and Brent’s rhapsodizing on the future of integrated systems. Cantar, Prieto’s ninth album as a leader, represents a step into the future, too; his first foray into writing lyrics—in two languages, no less. Featuring vocalist Luciana Souza and coproduced by her husband, veteran studio wizard Larry Klein, Cantar contains ten voluptuous performances by Prieto, Souza, multi-instrumentalist Peter Apfelbaum, pianist and vocalist Martin Bejerano, and bassist Matt Brewer.

Educated in Cuba’s exceptional conservatory system, Prieto is one of several talented young musicians who came to the US under the auspices of Canadian saxophonist Jane Bunnett. He rapidly distinguished himself as much more than just a talented jazz drummer. Prieto soon established his credentials as an imaginative composer and arranger, won a Grammy Award and several additional nominations, and was named a MacArthur Fellow—the “genius” designation that is shared by only a handful of contemporary musicians. 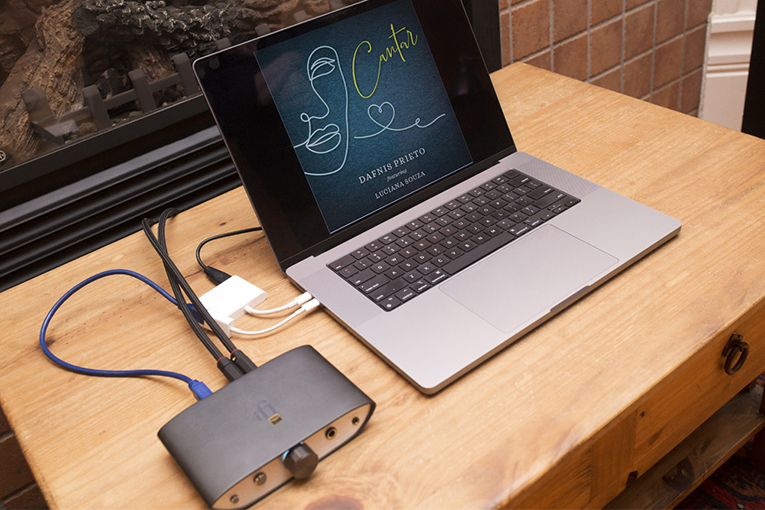 Since moving to New York City in 1999, Prieto has constantly expanded his horizons; writing and arranging for his big band (its album Back to the Sunset won a Grammy in 2018), leading a sextet, and writing music for chamber ensembles, dance troupes, and film projects. Earlier this year, he premiered an ambitious new work, Tentación, performed at several venues by People of Earth along with orchestras including the Louisville Orchestra, the Los Angeles Philharmonic, and the New World Symphony.

His writing on Cantar, which includes a shared lyric credit with Souza for one song, is varied and multifaceted, and the album is very well sequenced.

It begins on a joyful footing, with a stabbing piano figure that forms both the thematic foundation and rhythmic core of “Guajira en Sol,” which Souza sings exuberantly in Spanish.

The deeply felt “When I Miss You,” one of two English-language songs, demonstrates that Prieto has a nice feel for lyrics; they are succinct and direct. I’ll admit to having some difficulty when a singer whose first language is not English sounds like they’re singing the lyrics phonetically. Souza is multilingual, so she’s definitely not doing that, but I must say I enjoy her voice more when she’s singing in Spanish or Portuguese. That’s me; the occasional odd phrasing she uses may be just your thing.

Souza switches to her native Portuguese for “Houve Um Tempo,” a set of lyrics she wrote to Prieto’s highly danceable music, and it’s a gorgeous blend of voice and instruments. 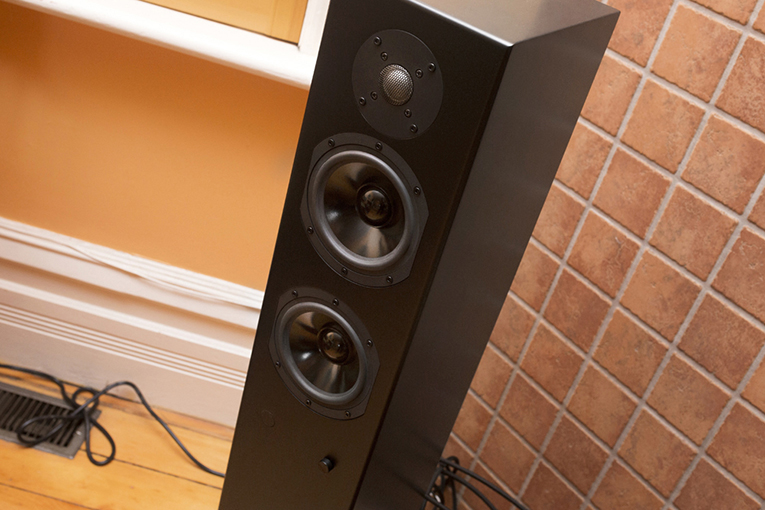 “Sueño de Amor,” with Spanish lyrics, takes things in another direction—a sultry art song with highly effective vocal delivery, marred only by a slightly cheesy-sounding synth solo. Based on the credits, that solo is by Apfelbaum, playing some electronic pads that trigger a tone akin to steel drums. It sounds foreign on a recording of such pure human expression. Again, listeners’ tastes may vary from mine; synthesized replication of actual instruments is a pet peeve.

Much more tuneful is Apfelbaum’s melodica, which covers what another arranger might’ve assigned to a bandoneon or accordion. It pops up on the complex, multipart “Brisa” and the lovely samba “Amanhecer Contigo,” which features Prieto’s lyrics translated to Portuguese and delivered in beautiful fashion by Souza.

As successful as those pieces are, the highlight—the wordless “To the Concert”—sounds like a spontaneous outpouring of musicality, featuring Souza mixing it up with Apfelbaum’s saxophone in spirited fashion. 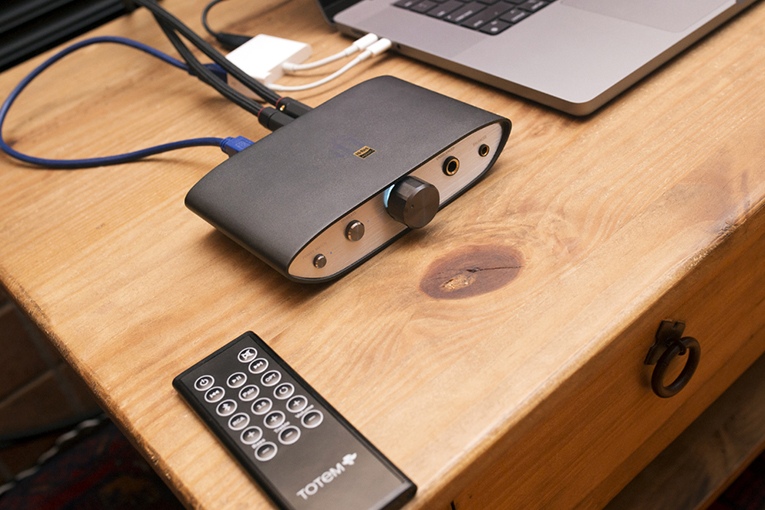 Out of the box—following a break-in period significantly shorter than the 100 hours(!) Totem recommends—the top end of the speakers sounded tight and crisp. Bejerano’s piano and Prieto’s cymbals sounded especially good when I turned up the volume. I was missing some of Brewer’s resonant double bass and Prieto’s larger drums, however, so I tweaked the bass up a little. That helped, but a subwoofer would be in order for a full listening experience. Although the bottom end of the Kin Play Tower was tight and well defined, it lacked the solidity of my reference Q Acoustics 3050i floorstanders.

It was time to clean up the mess I’d made in my living room, so I removed the iFi DAC and its associated cabling. My place still didn’t look sleek and shiny, but at least the Totems had a cleaner look. If only the process of connecting via Bluetooth was “cleaner.”

To connect, you must set the system in pairing mode, then pair it with your device. Two problems: the small metal remote didn’t seem to have much range, and even seated on my relatively low sofa (not a Minotti, to be sure), I had difficulty seeing the flashing blue indicator halfway up the front of the main speaker. I had to lower my head and move it to the left to see the LED.

Once connected to Bluetooth, the speakers performed respectably. However, as I usually find when I switch from lossless to lossy, the bottom end did suffer. 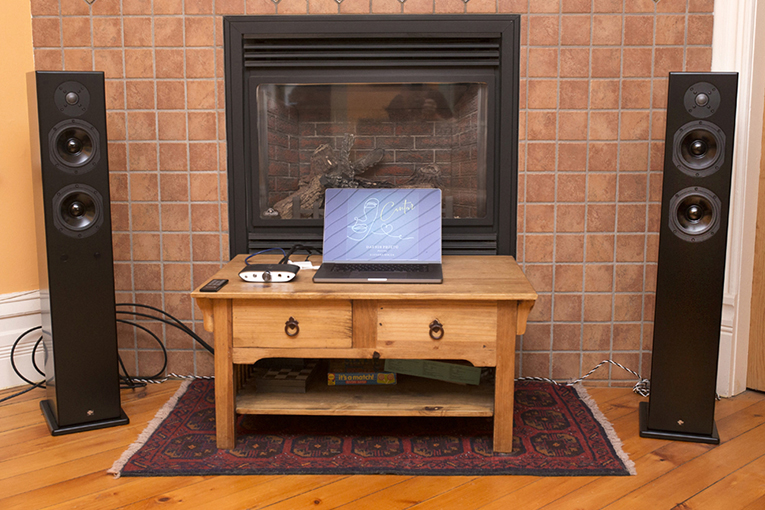 Like another MacArthur Fellow, Tyshawn Sorey—whose latest project I reviewed on this site—Prieto seems to know no bounds for his creativity. His lyrics sound highly personal and distinctive, and the addition of a poetic component to his already considerable talents bodes well for his future projects.

As for the future of integrated powered speaker systems, the Kin Play Tower may lean in the right direction, but Totem’s delivery of this promising concept isn’t perfect. I keep circling back to these questions: Why two TosLink inputs but no USB? Why make it so difficult to see the Bluetooth status light when wireless connectivity is such a cornerstone of the design?

But the Totem speakers do look stylish, and there are workarounds for my gripes, to be sure. At this price point, though, one might anticipate a more elegant execution of such a great idea. Musically, however, there’s no question that the Kin Play Tower powered music system delivered beyond its asking price.