As much as I love listening to music, I love the stories associated with the creation of music even more. Whether it’s the heartbreaking irony of seminal jazz trumpeter Buddy Bolden suffering a mental collapse just before the dawn of sound recording or the unlikely second act of Tina Turner—it’s the humanity that gets you. 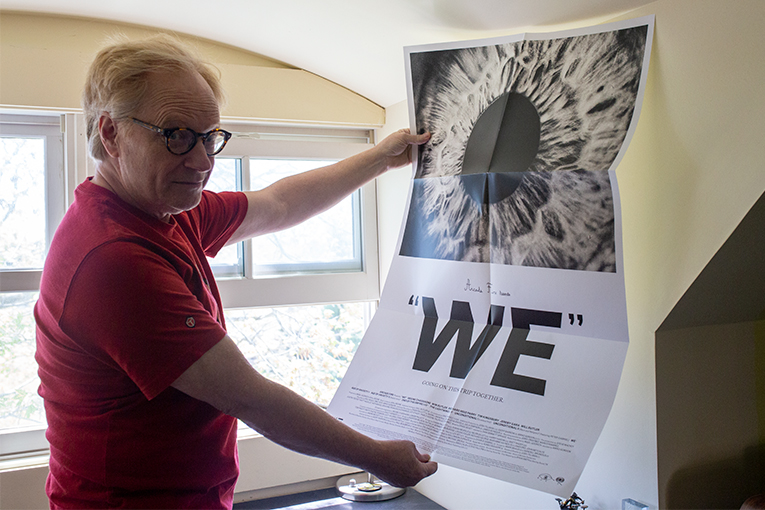 One of my favorite musical stories involves a 2005 encounter on a Montreal street between two graduates of an Ottawa arts high school. One was a young artist who had just returned from some far-flung backpacking; the other young man, Richard Reed Parry, was a musician just embarking on a much different type of journey.

“Aw, just back from hiking in Thailand. Vietnam before that. It was amazing! What about you? Any gigs?”

“Uh, my band just opened for U2 a couple of nights ago, and before that we did Letterman, played with David Bowie in England. It’s been cool.”

Wait! How does your high school buddy go from jamming with a variety of art-school and music-school friends to sharing stages with rock royalty in just a handful of months?

That was how fast success exploded for Arcade Fire.

In 2002, the band was beginning to make itself known around artsy circles in Montreal. My older daughter was a Concordia University film student who had attended the same high school as Parry, and she encountered Arcade Fire at various events around town. Arcade Fire drummer Jeremy Gara was another Ottawan known to many in the art-school set, and yet another Ottawa connection, Myles Broscoe, had been in an early version of the band. I knew Broscoe’s father, a jazz oboe player.

It seemed like local kids just having fun. By 2004—probably around the time that Parry’s backpacking friend set off on his adventures—the band still seemed like little more than a Quebecois version of Toronto-based Broken Social Scene; a loose collection of artists who all seemed to have at least one other outside pursuit.

How it went from that to Arcade Fire being nominated for a Grammy Award for its debut album, Funeral (2004), and hanging with Bowie and Bono had a lot to do with a tightly focused artistic vision that was obscured by the communal image of the original band.

In the early years, an Arcade Fire concert could make it seem like the group was a unit of many equal parts, and as many as 15 musicians were credited with playing on Funeral’s tracks. However, Win Butler and Régine Chassagne have emerged as charismatic co-leaders even if the other band members have frequently shared writing credits. That point was driven home to me one night in 2007 at a Bruce Springsteen concert in Ottawa, when the singer brought the husband-and-wife team onstage to sing two songs with him—one of his and one of theirs. 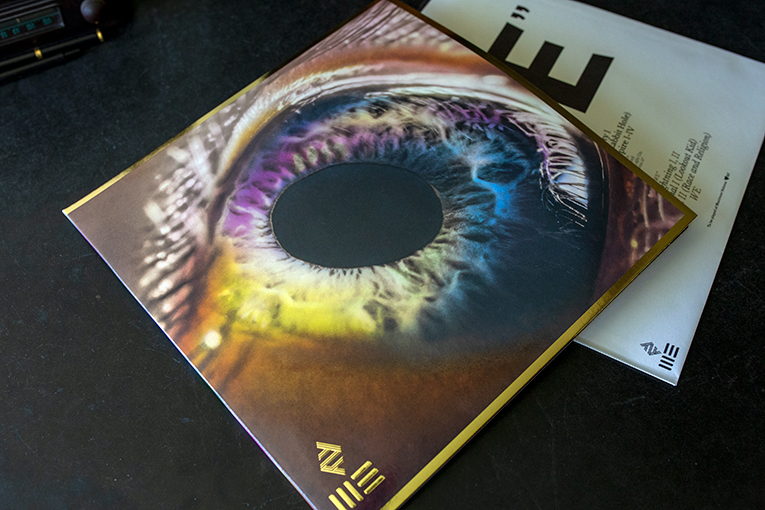 That first-name familiarity reflects the level of collective involvement with fans that Arcade Fire has stirred throughout its 21-year lifespan, but also the reality that We almost became a duo album during the pandemic. For an extended period, COVID-19 travel protocols separated Canadians Parry, Gara, and Tim Kingsbury from Butler and Chassagne, who live with their nine-year-old son in New Orleans.

While the pandemic isn’t specifically referenced on We, there’s no shortage of dread and angst expressed in the lyrics. Butler and Chassagne wrestle with topics like the fall of the American Empire (Butler was born in California and raised in Texas), social media, and the generalized anxiety associated with raising a child in today’s world.

The music that accompanies the pair’s inward-looking lyrics—which are delivered primarily by Butler, although Peter Gabriel duets with Chassagne on “Unconditional II (Race and Religion)”—covers ground that varies from thumping dance-floor beats to the acoustic guitar of the title song. Gabriel’s extensive use of “whisper-to-a-scream” vocal dynamics and Springsteen’s ability to construct anthemic choruses that bloom from simple piano lines remain obvious influences, although there is nothing on We that challenges the earworm quality of early Arcade Fire hits like “Keep the Car Running” and “Rebellion (Lies).” Still, the band does have an ability to create what sounds like a gathering storm and then deliver the wind and rain at levels designed to encourage audience participation.

In small copy under the list of song titles it reads: “To be played at Maximum Volume [Love] AF.”

AF, do I have an amplifier for you. 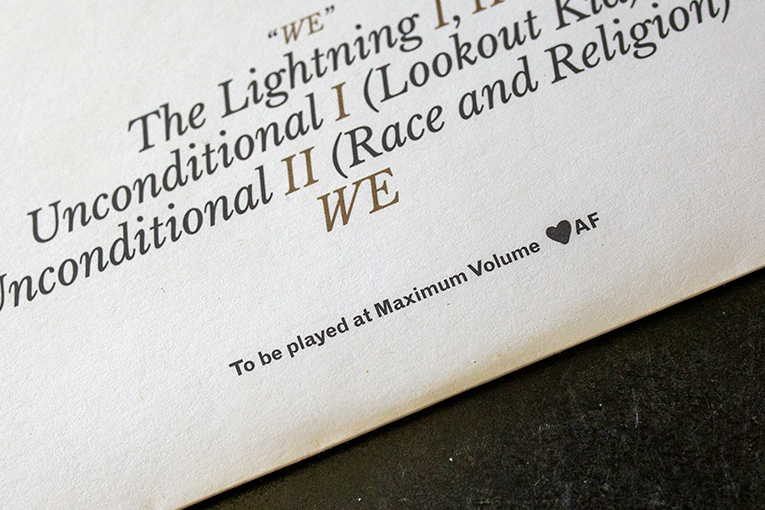 A little over a year ago, I spent some time with Rotel’s A11 Tribute, a 50Wpc meat-and-potatoes integrated amp that had been sprinkled with some sort of sonic pixie dust by audio legend Ken Ishiwata before his death. Now, Rotel has added another option—the A12MKII integrated amplifier-DAC ($1099.99, all prices in USD)—in the same affordable price category.

As my colleague Dennis Burger pointed out in his review of the A12MKII on SoundStage! Access, the new unit weighs in at a shade over 19 pounds, more than four pounds heavier than the A11 Tribute—something he attributed to a significantly larger heatsink and beefier power supply. Both upgrades contribute to the A12MKII’s output of 60Wpc into 8 ohms, <0.018% THD. 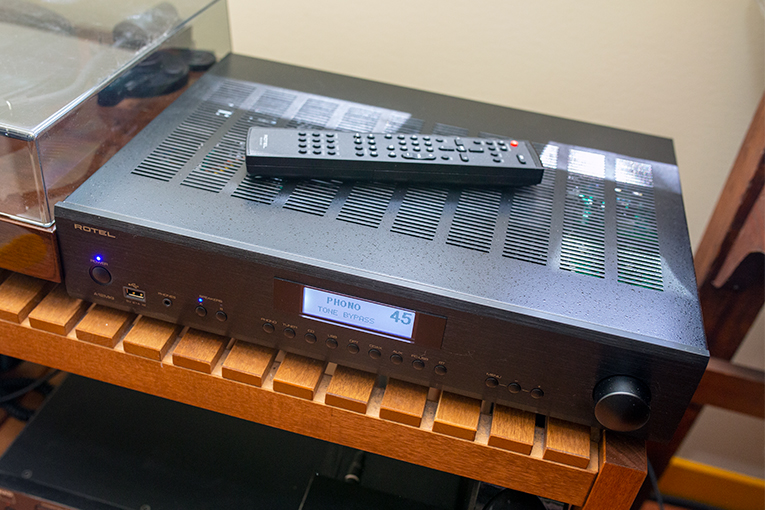 Like the A11 Tribute, the new amp has a utilitarian look: a low-profile case (3.6″H × 17″W × 13.5″D), a row of 14 pushbuttons on the front panel, a large LED screen, and a grated top. Both amps have tone and balance controls, allowing the listener to tweak the output to suit their sound preferences and environment.

The big difference is that the A12MKII offers a lot more digital connectivity—including a USB-DAC input (Type B), two optical (TosLink) and two coaxial (RCA) S/PDIF digital inputs. The analog inputs include moving-magnet phono, CD, tuner, and two auxiliary stereo line-level, all with RCA connectors. There’s a stereo RCA preamp output, and the amp has Bluetooth with aptX and is certified Roon Tested. 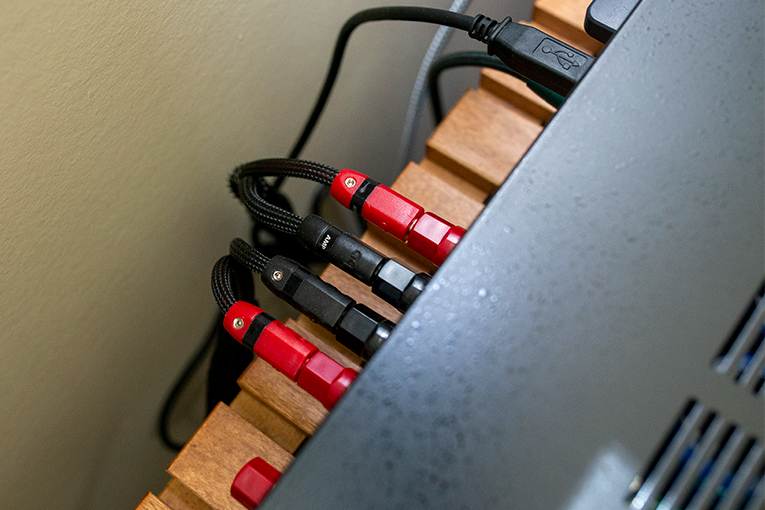 Although the A12MKII doesn’t flaunt its aesthetic design, the same can’t be said for the packaging for We. It shows the band’s art-school roots proudly, with a stylized, gold-toned embossed logo on the LP’s front cover, an enclosed sticker that alludes to the lyrics of “End of the Empire (Sagittarius A*),” and a large, foldout insert that includes the album’s credits, printed like the credits on a movie poster.

So much attention paid to detail, yet little, it seems, to the diameter of the LP’s center hole, which was too small for my turntable’s spindle. Now, given that LPs sell for about five times what they did before digital technology unseated the format as the go-to for music lovers, one might think that manufacturers would invest more in quality control. But no; I encountered the same issue with the last Analogue Productions LP I purchased, along with some notable surface noise.

Yes, I digress, but I suspect many of you may share my frustration. 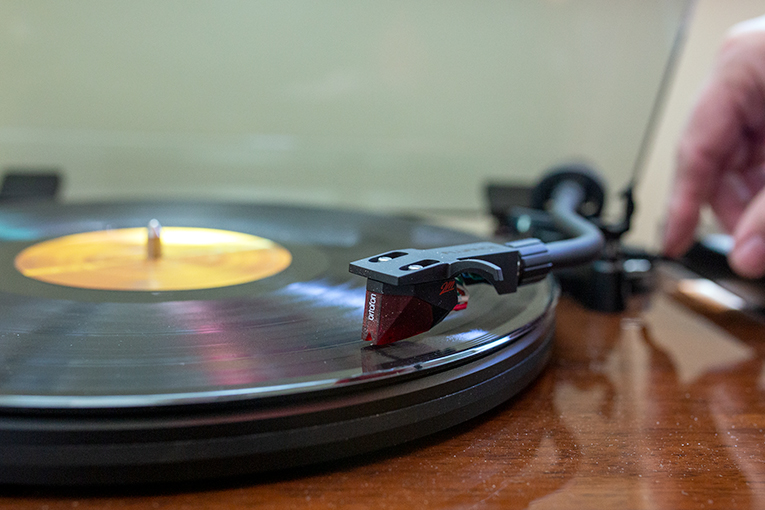 After I had determined which was side 1 of the LP—the equivalent of choosing the right washroom door at restaurants that insist on eschewing M and F signs—I finessed the disc onto my Fluance RT83 turntable and lowered the tonearm.

If I felt anxious from navigating the complex packaging and wrangling the vinyl onto my turntable, Win and Régine were ready for me.

But I’m not sure they are talking to me—at least not with obscure lines like this:

For much of We, Butler and Chassagne tread the line between going for universal truths and being very specific. They’re far more successful when they manage to connect to true human emotions, as in the simple phrase “a lifetime of skinned knees” on “Unconditional I (Lookout Kid),” a (mostly) optimistic song for their son. Now, that’s something we can all relate to, and it’s nicely wrapped in a sonic package that gives the listener a couple of sing-along options. Butler still has a great ear for a hook.

Beyond the lyrics, Arcade Fire’s best “hook” is the band’s ability to employ sound itself to convey emotion. Much of the gloomy, introspective “I” side is enveloped by the equivalent of a sonic pillow, which muffles Butler’s voice and Gara’s drums—particularly his cymbals—on the opening track, “Age of Anxiety I,” and allows the synthesized bass line to be felt more than heard.

That approach played to the strengths of the Rotel, since it had both the clout to deliver dark overlay and the transparency to capture the small instrumental details the band deposits like Easter eggs.

Flipping the LP to the “We” side reveals a lighter touch in the studio—witness the power and variety of Gara’s drums on “The Lightning II,” where the band switches to full-throated anthemic splendor. Despite its gentle, Celtic-tinged opening, “Unconditional I (Lookout Kid)” also hits Arcade Fire’s anthemic sweet spot, but some listeners might find the Chassagne/Gabriel duet that follows something of an anticlimax.

I’m less enthralled with the way Butler recycles Lana Del Rey’s languid romantic irony on “End of the Empire I (Last Dance)” or seems unable to effectively express how bummed he is to see the state of his homeland in 2022 without relying on musical ideas from Brian Wilson, Bowie, and Elton John, or lyrical imagery borrowed from Bowie, Jimi Hendrix, and Springsteen. Butler’s strength is his ability to conjure undeniable urgency, heightened by his breathless delivery, which often sounds on earlier recordings like he’s singing through a megaphone. Here, by emphasizing introspection and obscure generalizations—to say nothing of failing to develop a novel metaphor for a great nation’s decline—he diminishes that urgency. 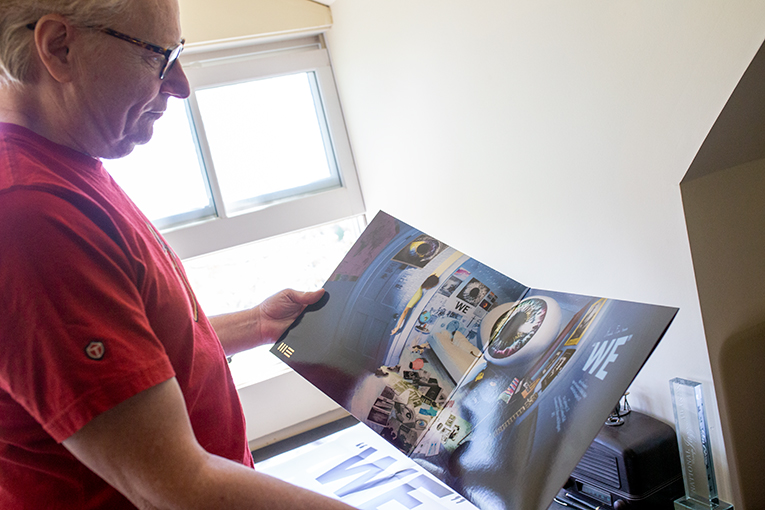 Much of the media coverage of We has focused on how the band may be looking to recover from the spotty reception accorded their last album, 2017’s Everything Now. That seems like a simplistic rationale for how the new album sounds or what it expresses; after all, I had hoped that the rousing “I Give You Power”—the band’s duet with Mavis Staples, released just prior to Everything Now as a fundraising single—might point to a new, focused social commentary on the album that followed. Clearly, Butler and Chassagne don’t make music to fit in with or refute anyone’s ideas of what they should do.

Arcade Fire remains an artistic outlet that is constantly in flux (Butler’s brother and longtime band member Will Butler resigned following the release of We). Blink—or go backpacking for a few months—and you might miss the band’s next move.