In late 2015, Amazon launched its first Echo smart speaker, ushering in a new category of technology products. A year later, Google introduced the Echo’s first competitor, the Google Home, and in spring 2017, Microsoft announced a partnership with Harman/Kardon to bring Microsoft’s digital assistant, Cortana -- present on any PC running Windows 10 -- to a standalone wireless loudspeaker, the Invoke ($199.95 USD). 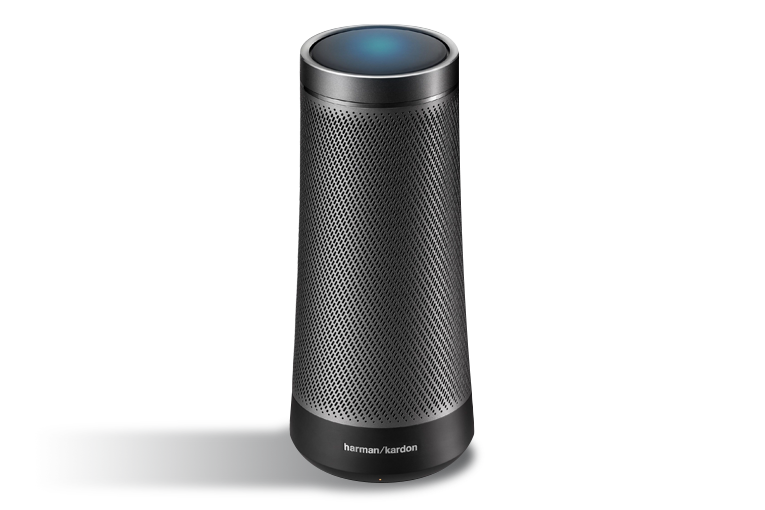 The Harman/Kardon Invoke is a tapered cylinder, available in Graphite or Silver, and measuring 9.5”H x 4.2” in diameter and weighing 2.3 pounds. While the design is reminiscent of Amazon’s original Echo, the nearly full covering of the metal grille and overall better fit and finish make the Invoke the more attractive product. At the top are a silkily turning volume ring and a button to control some of the Invoke’s functions -- e.g., stopping whatever music might be playing, or answering or hanging up Skype calls. At the bottom rear are buttons for Bluetooth pairing and muting the Invoke’s built-in microphones. Of course, the Invoke is mostly controlled by voice commands, for which H/K has implemented their own seven-microphone array and associated signal processing, called Sonique. During my time testing the Invoke, I was impressed with its ability to hear me wake it up with a call of “Hey Cortana!” -- even when I was playing music at high volumes.

The Invoke’s driver complement comprises three 1.75” woofers, three 0.5” tweeters, and two 3.4” x 1.75” passive radiators. All of these are driven by a 40W amplifier to achieve a claimed frequency response of 60Hz-20kHz, -6dB. The user guide lists the audio formats supported: AAC, FLAC, MP3, WAV, WMA, and Vorbis. At present, there’s no way for the Invoke to render your music files directly; instead, music can be streamed to the Invoke from iHeart Radio, TuneIn, or Spotify -- the last only with a Premium account. While Spotify Premium subscribers can set the bit rate in the iOS and Android apps, there appears to be no way to set a default bit rate for the Invoke, and I was unable to find out through our contact at Harman/Kardon which bit rate the Invoke uses. This is why I didn’t know the file format or resolution of most of the recordings mentioned in this review. Still, since Spotify sounded better than either of the other two services, that’s what I used for my listening, except as noted. Aside from its connected services, the Invoke also supports audio streaming via Bluetooth v.4.1. 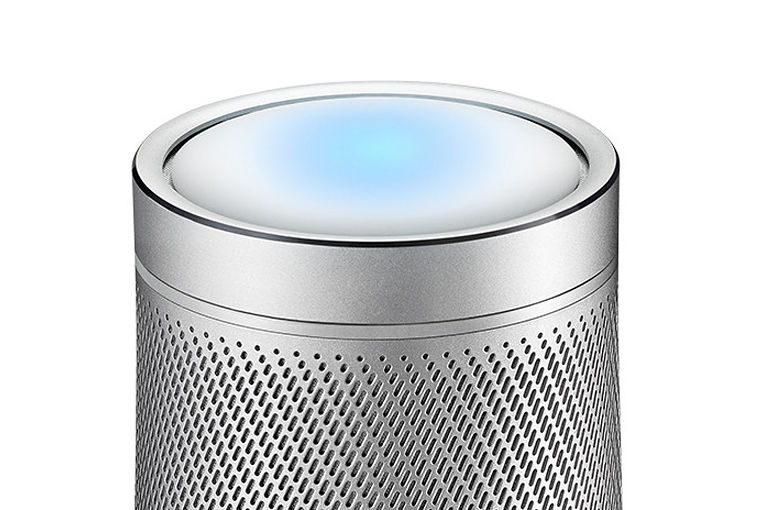 While the Invoke is the first application of Cortana to a standalone device, Microsoft claims that nearly 150,000,000 people use Cortana each month. With the data from all those interactions to draw on, the basic functionality of Cortana, when it comes to understanding your requests or performing simple information lookup, is quite good -- better than Amazon’s Alexa. For example, Cortana might consult Wikipedia, but if it doesn’t find the answer there, it will do a Bing search and select one of those results; Alexa will just give up. Cortana was also much better than Alexa at understanding foreign words -- when I asked it to play “Totenfeier,” I didn’t have to specify that the work was composed by Gustav Mahler. I then asked Cortana to translate Totenfeier into English, and she came up with the very acceptable answer of funeral ceremony. (A slightly more precise translation would be obsequy.) Another advantage to Cortana over Alexa is that a reminder set on the Invoke will trigger on your phone if you’re out and about, rather than only on your speaker at home.

Beyond those basic functions, however, and without the thousands of third-party skills available for Alexa, Cortana quickly showed her limitations. For example, the smart home devices I have are from TP-Link, which, at time of writing, was not supported. Even Cortana’s integration with Microsoft’s own products revealed some surprising omissions. Cortana can be connected with your Outlook or Office 365 account, but is unable to access your e-mail directly -- a third-party skill does provide some limited e-mail capabilities. Although it could connect to my calendar, in the first few weeks I had the Invoke it could tell me only how many events I had scheduled for the following week but no details about any of those events, unless I asked about a specific day. Then, one day, better calendar functionality simply appeared. Because Cortana’s feature set is constantly changing, I won’t devote a lot of space here to detailing all the things the interface can and can’t do, as they’ll likely have changed by the time you read this. For the most current information, consult the websites of Microsoft and Harman/Kardon. 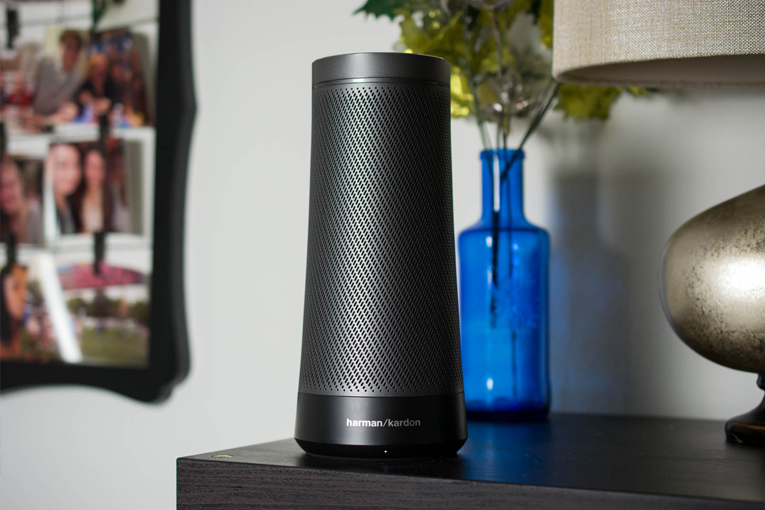 One of the Invoke’s unique features is worth writing about: its integration with Skype. After installing the Cortana app on your smartphone and giving it access to your contacts, the Invoke can call anyone in the US or Canada at no charge (though this might not be the case forever), as well as international numbers with the appropriate Skype credit. It can also call local businesses and numbers you dictate. The Google Home and Amazon Echo also have this functionality. However, if, like me, you have a Skype number, the Invoke can also accept incoming calls. I’ve set my Skype number to forward to my mobile when I’m not online or don’t answer on my computer. Conveniently, calls rang simultaneously on the Invoke, my computer, and my mobile -- provided I was logged in to Skype on the latter two devices -- before forwarding to my mobile number. I could pick up the call whichever way was most convenient -- often, by just saying “Answer” to the Invoke. My callers’ voices were clear, though I usually had to turn up the volume. On the other end, my interlocutors could tell I was on a speakerphone, but had no trouble understanding me.

For such a small device, the Invoke could play impressively loudly; it was easily capable of overwhelming the small bedroom-office (150 sq. ft.) where I mostly used it, and sufficiently filled one end of my moderately sized living room (400 sq. ft.). Equally important, the Invoke’s sound remained clean and in control, even at maximum volume. In fact, aside from a somewhat emphasized bass response when I turned up the volume, as boundary reinforcement came more into play, the Invoke’s overall sound changed little, from quiet background to attention-demanding levels.

Given the physical constraints of so small a speaker, it was unsurprising that the bottom bass octave was entirely missing. But moving up into the midbass, the Invoke delivered exceptionally punchy kick drums from such songs as the Eagles’ “Hotel California” and Daft Punk’s “Instant Crush.” The prominent midbass also made electric-bass lines sound extra-fat -- something many listeners like. On the other hand, it detracted from Daryl Johns’s well-recorded double bass on Macy Gray’s Stripped, obscuring the tone and shape of individual notes. As with any speaker that lacks built-in room-correction software, getting a good balance of bass level and clarity meant not placing the Invoke close to a room’s corner. 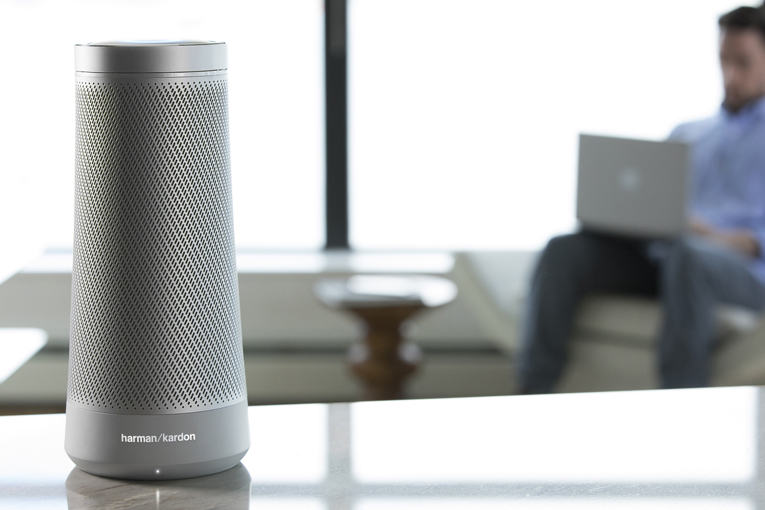 Fortunately, any excesses in the midbass were limited to a fairly narrow range of frequencies, and didn’t intrude on the vocal range. Leonard Cohen’s closely miked voice in “Bird on the Wire,” from his Songs from the Road, was big and bassy, but no more than intended, and entirely clear and articulate. Fredrik Zetterström’s more naturally miked baritone in “Frieriet,” which he sings with mezzo-soprano Anne Sofie von Otter and pianist Bengt Forsberg on A Summer’s Day: Swedish Romantic Songs (24-bit/88.2kHz FLAC, BIS/eClassical, streamed from computer via Bluetooth), was rich and weighty without becoming too congested. Men’s and women’s voices of higher tessituras were reproduced exceptionally cleanly and naturally. Of course, I most valued the Invoke’s natural-sounding reproduction of voices with singers, but I also appreciated hearing the voices of radio announcers without the colorations typical of table radios.

At the top end, the Invoke was sufficiently extended to sound open while cleanly reproducing transients -- such as the sound of Eric Clapton’s pick against his acoustic-guitar strings in “Layla,” from his Unplugged (Reprise). While I wouldn’t consider the Invoke’s sound to be bright overall, I did sometimes hear a bit of extra splash from cymbals, brassiness from brass, and astringency from massed violins. This extra treble energy wasn’t there with everything I played, but I heard it often enough to recognize it as a characteristic of the Invoke’s sound. But even after I’d identified this coloration, it didn’t really interfere with my enjoyment of music through the Invoke. 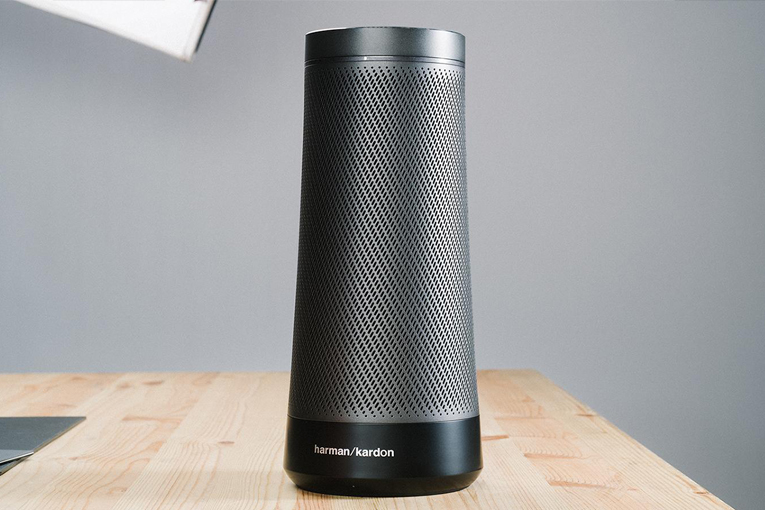 Aside from the Amazon Echo’s wonky frequency balance -- lots of upper bass and a too-prominent upper midrange -- what discouraged me from using it to listen to music was that anything more complex than a voice and guitar quickly began to sound confused. In this respect, too, the Harman/Kardon Invoke was in a different league from the Amazon Echo. I had no trouble following all the goings-on in Derek & the Dominos’ original, densely layered recording of “Layla,” from the album of that title, and with Macy Gray’s Stripped I could even hear the depth cues that marked the distance of each instrument from the single stereo pair of microphones (in this case, a dummy head, or Kunstkopf, used for binaural recording). The only times I thought I should hear more than the Invoke delivered were with recordings of full symphony orchestras -- though here, I think, part of the limitation was due simply to the fact that the Invoke is a single speaker. While the Invoke’s omnidirectional radiation pattern does make it sound bigger and more open than the typical monaural device, and I could hear some layering of singers and instruments with the right recordings, even the very best single-box speakers can’t project the three-dimensional soundscapes or build up the walls of sound possible with a good pair of stereo speakers. The only downside in the Invoke’s superior clarity is that I could easily hear the difference between all the artifacts in the very compressed stream of my local classical radio station via TuneIn, and similar content through the far less compressed stream from Spotify. If you buy the Invoke, you’re going to want to spring for that Spotify Premium account.

Harman/Kardon’s Invoke has exceptional sound quality for its size and price. Its ability to play at high volumes without noticeable distortion is particularly impressive, and its uncolored midrange paired well with all kinds of content, from music to podcasts. Its punchy bass was also a great complement to most rock and pop music. Where the Invoke fell short was on the software side. While some of the Invoke’s basic functions, like reminders and information lookup, do work better than Alexa, and Skype integration will be a useful feature for some, the paucity of third-party skills for Cortana means that there’s much you can do on Alexa-powered devices that you can’t do on the Invoke. That may change, but for now, as good as the Invoke sounds, it may not be the best choice for most users. When and if Microsoft decides to get serious about making Cortana a digital assistant for the home, the Invoke could be a compelling product.