The speaker designed for desktop use is a category that seems to be in flux. A few companies specialize in desktop designs -- Audioengine comes to mind -- but most mainstream speaker makers have either missed the boat or taken a pass on the opportunity to make a statement in this category.

There are two reasons for this. First, the explosion of portable devices -- including high-resolution-capable dedicated digital music players and high-quality headphones -- has given audiophiles plenty of listening options other than sitting at a desk. And second, wireless technologies such as Wi-Fi and Bluetooth have untethered speakers from the desktop, providing other avenues for smaller-scale listening. 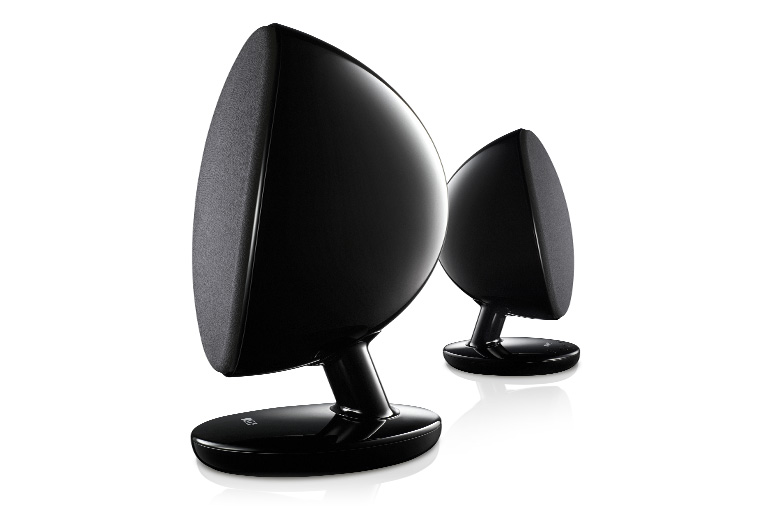 It’s in this post-desktop-speaker context that we consider KEF’s Egg powered wireless loudspeakers ($499 USD per pair). The Egg is a compact powered speaker with a built-in, 24-bit/96kHz USB DAC for connection to a computer. It also has an optical digital input and aptX Bluetooth, allowing it to be used with a TV or as a wireless hi-fi system in smaller spaces such as bedrooms or offices.

The Egg uses one of the patented, Uni-Q driver arrays that are found throughout KEF’s speaker lines. In this arrangement, the axes of midrange and high-frequency drivers are in line with one another, so that the soundwaves generated by both emanate from the same point in space. According to KEF, the benefits of such a “point-source” array are improved sound dispersion and more precise imaging over a wider area -- listeners in a wider range of seats can experience the same sound quality. In the Egg and other KEF models, those benefits are enhanced by the tangerine -- a waveguide developed for KEF’s flagship speaker, the Blade, that radiates sound spherically to further even out the dispersion of high frequencies.

Also as in other KEF speakers, careful attention has been paid to the Egg’s enclosure design (10.8”H x 5.4”W x 6.8”D, 4.74 pounds each). Each cabinet (available in finishes of black, white, or matte blue) is in the shape of half an egg cut on its longitudinal axis, and is supported by an integrated base. This Uni-Q driver array comprises a 0.75” vented aluminum-dome tweeter and a 4.25” aluminum midrange-woofer. The right speaker contains the system’s 50Wpc amplifier, and is linked to the left speaker by a 6.5’ cable that can be wound into the latter’s base, to eliminate slack. 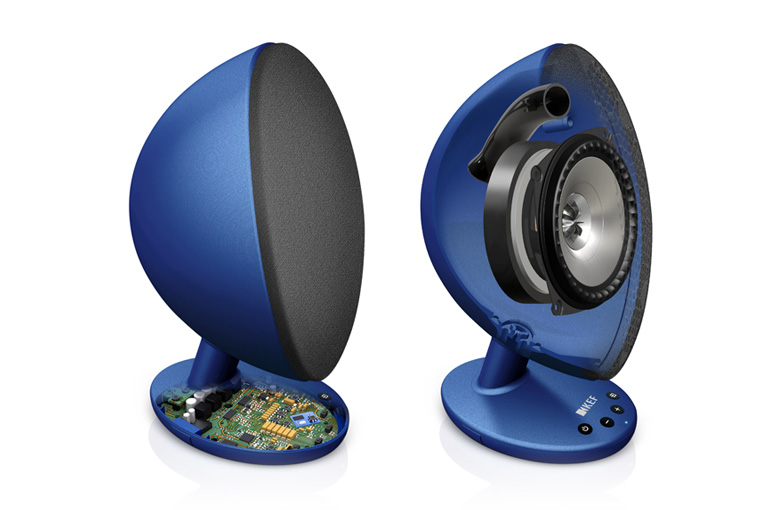 On the base of the right-hand Egg is a row of buttons that let you manually power the system on/off, switch sources, and adjust volume. KEF also includes a slim remote control with the same controls, plus buttons for next and previous track, and for listening via Bluetooth. Connections on the right speaker’s rear panel include Mini USB Type B, a combination jack that supports Mini TosLink optical or 3.5mm analog input, and a subwoofer output. The sub-out jack supplies a full-range signal, leaving you to set the crossover on any sub that you attach, for an optimal blend with the Eggs’ output. KEF doesn’t recommend a specific setting, but given the Egg’s frequency response of 80Hz-45kHz, -6dB, a good place to start might be 90-100Hz.

KEF provides everything you need to get up and running. Along with the remote control, the Egg system includes USB A-to-Mini-Type-B and optical digital interconnects, and a power supply that plugs into the back of the right speaker. All other features are built in, making the Egg essentially plug-and-play.

I listened to KEF’s Egg system in two environments: on a desk in my home office, linked to a MacBook Pro via USB; and flanking a 60” TV on a stand in my bedroom, with the TV’s optical digital output connected to the right-channel Egg. In both installations, the 6.5’ interconnect between the speakers was long enough, though I can easily imagine settings in which something longer might be preferred. 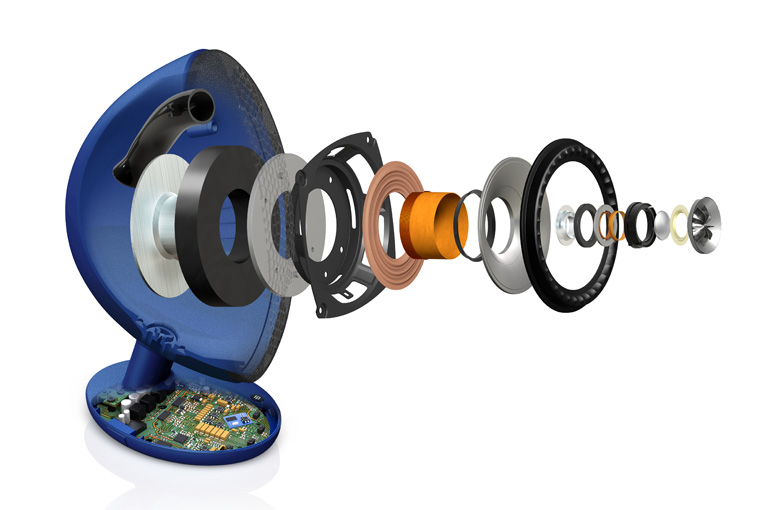 On the right-hand Egg’s base is an LED indicator that glows different colors, depending on the source selected, or red when the system is in standby mode. KEF’s remote control has a clean layout, and was a dependable option for volume adjustments and selecting sources when I used the Egg in the bedroom. Bluetooth pairing was a snap: I selected the Bluetooth input, then the “Egg” option in my phone’s Bluetooth control panel, and I was done. Computer setup was equally simple, the Egg showing up as a selectable USB audio device in my Mac’s Audio MIDI setup panel.

I began by listening to the Egg system as set up on my desk, and right away was impressed by its neutral tonal balance and decent bass extension. With speakers that close to the ears (in my case, about 3’), any treble emphasis or bass bloat will become bothersome over time. No such problems with the Eggs. 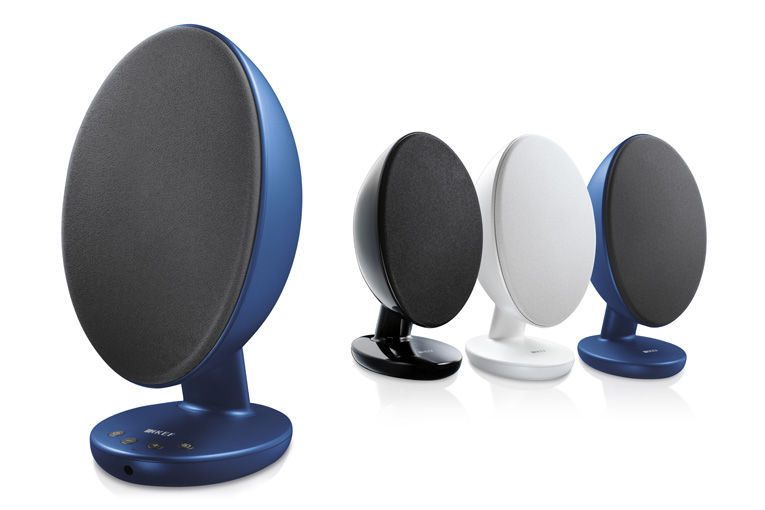 Keeping with the theme of singer-songwriter with acoustic guitar, I next streamed “Cut Me Down,” from Kevin Morby’s Singing Saw (16/44.1 FLAC, Dead Oceans/Tidal). As I listened with eyes closed, Morby’s voice -- an appealing cross between Bob Dylan’s and Leonard Cohen’s -- had a larger-than-life sound that caused the Eggs to seem to vanish entirely. The soundstage was similarly extended, the placements of instruments spreading well beyond the boundaries of my desk. Meanwhile, the KEFs’ renderings of reverb-drenched guitar and the eponymous musical saw created a satisfying sense of spaciousness and depth.

Encouraged by this sort of scale, I went for something more spacey and electronic -- “Daydreaming,” from Radiohead’s A Moon Shaped Pool (16/44.1 FLAC, XL/Tidal) -- and experienced a merging of the many qualities I’d so far appreciated in the Eggs. The piano sounded soft and slightly wobbly, while Thom Yorke’s plaintive voice had good texture, and was completely unrestrained. Crisp washes of electronic ambience and guitarist Jonny Greenwood’s minimalist orchestration filled out the sound to a surprising degree, creating an icy, panoramic sound.

To test out the Egg system’s hi-rez capabilities, I played “Whole Lotta Love,” from Led Zeppelin’s II (24/96 WAV, Atlantic/HDtracks). The KEFs convincingly staged the Ping-Pong, stereo-panned chaos of the song’s middle section. After, when the band jumps back in, starting with guitarist Jimmy Page and followed by drummer John Bonham’s slowly slammed fills, the system displayed an ability to rock, though the track was missing some of the bottom end that would have conveyed John Paul Jones’s bass guitar with greater authority. This was the only time I yearned for a subwoofer to fill out the Eggs’ sound. 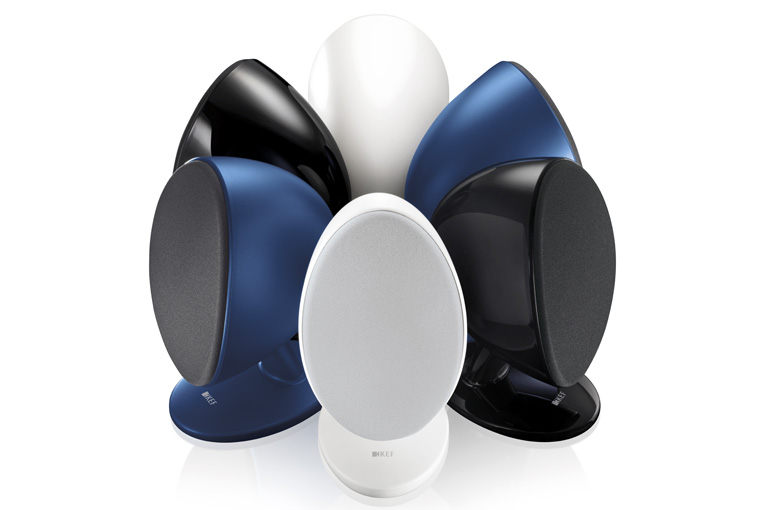 I then listened again to many of the same tracks, this time streamed via Bluetooth in my 14’L x 12’W bedroom. Though here the KEFs still managed a full and fairly dynamic sound, their output limitations were more apparent than at my desk. The sound was also now brighter, which I attribute more to my bedroom’s acoustic than to the use of Bluetooth. Still, the crisp sound had its advantages for watching movies and TV. For example, the dialogue in an episode of HBO’s True Detective (Blu-ray) sounded natural and clear -- comparable to any 2.1-channel soundbar I’ve heard in the Egg system’s price range.

KEF’s Egg wireless powered loudspeakers delivered great sound and has a range of useful features -- and, at $499, is comparable in price to just about any other set of desktop speakers or all-in-one TV sound system providing the same level of sound quality. While the egg-like look might not appeal to everyone, there’s no question that the speakers’ small footprints make them a more user-friendly option than, say, KEF’s own X300A, a more powerful model that can rather dominate a desk. During my time with the Eggs, their neutral balance, combined with their impressive detail and dynamics, made for especially compelling desktop listening. Perhaps there’s a solid future for desktop speakers after all.