Recommending pairs of loudspeakers to audiophiles and to non-audiophiles are two different propositions. It’s analogous to selecting the right bottle of wine to bring to a friend’s house for dinner. If the friend is a wine aficionado, the task becomes a tedious, labor-intensive process that includes trying to remember if she likes red or white, light- or full-bodied, Old World or New World, and so on. In every other circumstance the decision is far easier: $12-$15 USD, cool label, done. Up until 2010 or so, Audioengine’s A2 ($149/pair) and A5 ($349/pair) powered speakers were my go-to suggestions for audiophiles and non-audiophiles alike, and for good reason. The speakers looked good, were easy to set up, and sounded great for the money, with surprising amounts of bass. 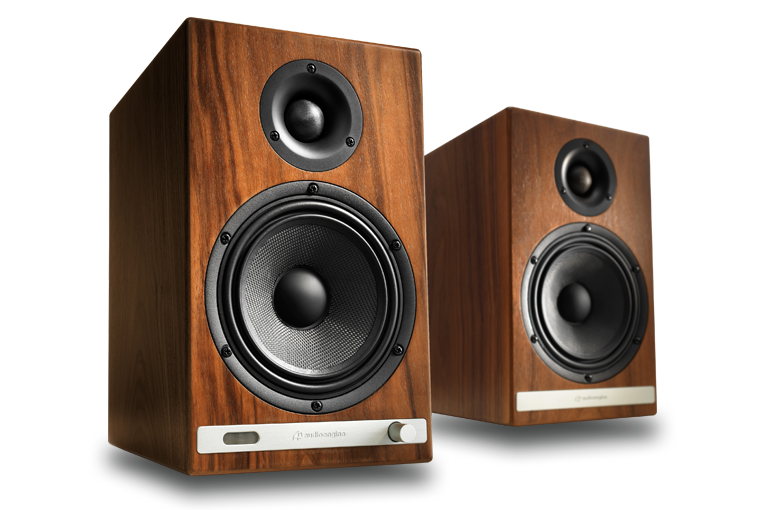 Since then, however, plenty of rivals have popped up. Adam Audio, Emotiva, M-Audio, Paradigm, and PSB Speakers are but a few of the companies whose products now challenge Audioengine’s sub-$500 desktop speakers -- and despite Audioengine’s release a few years ago of updates of those models, the A2+ and A5+, the competition is stiffer than ever. Now, with their new flagship model, the HD6 ($749/pair), Audioengine is moving upmarket.

A few years ago, when I reviewed Audioengine’s A5+, I was a big fan. It cost $469/pair (still does), and my review samples were finished in beautiful bamboo. So I was a touch concerned when the review samples of the HD6es arrived -- their drivers looked more or less identical to those of their significantly less expensive siblings.

As it turns out, they are pretty much the same. Brady Bargenquast, a cofounder of Audioengine, told me, “Over our two-year development [process for the HD6] we experimented with various configurations, including some really nice ribbon tweeters, but eventually circled back to our own in-house 25mm design.” While the A5+ has a 0.75” soft-dome tweeter, the HD6 uses a 1” variant. The 5.5” Kevlar midrange-woofer is almost identical to the 5” version used in the smaller A5+, the only difference, other than the size, being the cast-aluminum basket (vs. the A5+’s stamped steel). The crossover is a first-order (6dB/octave) passive network with upgraded components. “We had a tight budget,” Bargenquast said, “but we still think our audiophile friends will approve -- and all components can be easily swapped out, so hopefully the DIY upgrade crowd will be OK with this decision.” 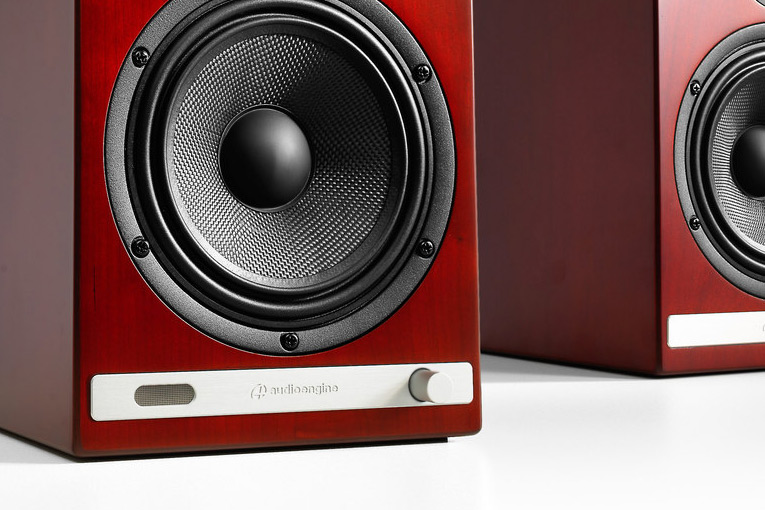 I’m confident that just about every buyer will be OK with the HD6’s appearance. Available in finishes of Black, Cherry, or Walnut, the HD6 is a handsome, conservatively styled loudspeaker. The finish is of surprisingly high quality for the money, with zero imperfections of fit, tolerance, or even the grain of the wood finishes. A subtle trim strip of aluminum runs across the bottom of the front baffle; on the left speaker, this strip includes a soft light and a small volume knob. Magnetically attached grilles are included, though I found the retro look of the naked speakers far more attractive.

As in Audioengine’s less expensive models, the left speaker houses all of the electronics and inputs; the right speaker is passive, and connected to the left with copper cables terminated with banana plugs. Packed into the left cabinet are two 50Wpc class-AB mono amplifiers, RCA inputs and outputs, a 3.5mm input, an optical input, binding posts that connect to the right speaker’s posts, a Bluetooth pairing button, an antenna connector, a master power switch, a voltage selector, and a power inlet. Much of the left speaker’s rear panel is taken up by a finned heatsink; just above it is a slotted port that runs the speaker’s width. Each bass-reflex speaker measures 11.75”H x 7.25”W x 10”D; the electronics-stuffed left one weighs 17.5 pounds, the passive right 12.5 pounds. The HD6 has a claimed frequency response of 50Hz-22kHz, ±1.5dB, a wireless range of approximately 100’, and a wireless latency of ~30ms.

The HD6 sharply diverges from the A5+ in including the circuits from Audioengine’s B1 Bluetooth receiver (which supports the aptX, AAC, and SBC codecs) and D1 24-bit asynchronous DAC. The D1 uses AKM’s AK4396 DAC chipset, which accepts up to 24-bit/192kHz signals, and automatically converts everything to a word length of 24 bits. However, signals with a sample rate of 88.2 or 192kHz are resampled by the AKM to 96kHz for playback, and, as with other AKM chips, there is no support for 176.4kHz content. All content streamed via Bluetooth is processed by the AKM DAC. With the B1 selling separately for $189 and the D1 for $169, the strong aroma of a good deal becomes difficult to ignore. 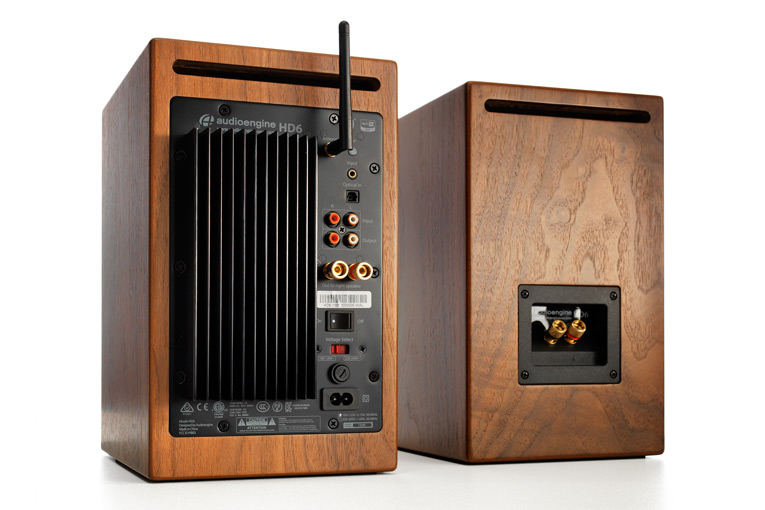 Audioengine’s dedication to making their products plug’n’play is evident in their inclusion of the aforementioned speaker cables, a 3.5mm cable, an RCA cable, and an impressive remote control. Though small, the remote is made of a single piece of aluminum, with Volume controls and Mute and Power buttons.

Setup was a breeze. Pairing via Bluetooth was as easy as pressing the Bluetooth button on the rear of the left speaker and selecting “Audioengine HD6” on my iPhone, iPad, and MacBook Pro laptop. Most of my listening these days is to Tidal’s streaming music service, and Tidal over the HD6’s Bluetooth input was an entirely seamless experience. Although streaming at the full CD resolution of 16/44.1, I heard not a single dropout, and little lag when I started or stopped a song. 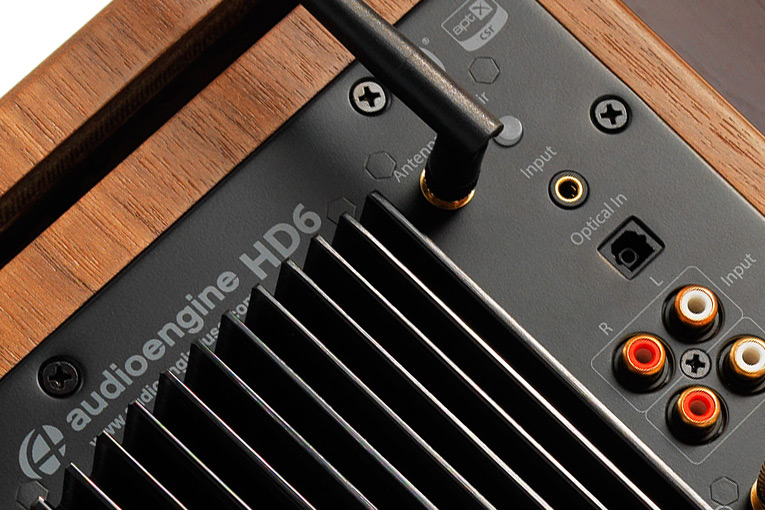 I used the HD6es in my desktop system for a week or two. My desk measures 60”W x 30”H x 30”D -- anything smaller and I suspect that using the HD6es in a nearfield setup is pretty well ruled out. I also connected my TV to the Audioengines’ optical input, and tried the HD6es’ RCA and 3.5mm analog inputs using my iPhone as a source. Not once was the HD6 flummoxed. Audioengine’s new flagship earns top scores for usability.

The Audioengines should prove easy speakers for just about anyone to like. They provided me with a rich, robust sound from top to bottom, with a punchy mid- to upper bass, a hearty, full-blooded midrange, and a clean if slightly rolled-off top end. In “Skeleton Song,” from Kate Nash’s Made of Bricks (16-bit/44.1kHz FLAC, Universal), the singer-songwriter’s voice had terrific weight, and a slightly relaxed sound. The HD6’s tonal balance was broadly neutral, if with a touch of midrange warmth. Nash’s nervous falsetto was easily discernible, even if the finer details of her delivery were lightly obscured by the HD6’s midrange smoothness. This took a touch of sheen off the violin, which sounded more solid and deliberate than airy. 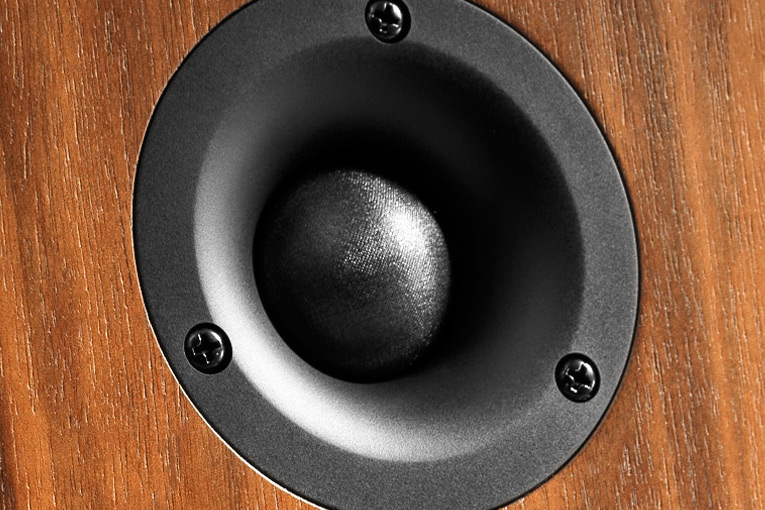 Listening to “Desire,” a standout track from Years & Years’ standout first album, Communion (16/44.1 FLAC, Interscope/Polydor), I was impressed by frontman Olly Alexander’s solid central image, which remained composed even when I drove the Audioengines to unreasonably high volumes. The HD6 wasn’t the most spacious-sounding speaker; instead, it produced an intimate, midrange-focused sound. Its tweeter’s credible extension meant that the HD6 never sounded dark or closed in, merely a bit polite. Despite the heavily synthesized, poppy production of “Desire,” the sound had little in the way of sparkle or quick-fire transient response. What was abundantly present was addictive bass response. The 50Hz lower limit of the HD6’s specified frequency response looks modest on paper, but it’s easy to forget that most bass energy in most music falls between 60 and 100Hz. It’s how that range is handled that does much to define a speaker’s overall sound. With Years & Years’ generic, synthesized bass lines, the HD6es’ sound was full and impactful without bloat, and with little of the upper-bass hump that’s designed into the sound of many two-way speakers. Not once did I find myself pining for a subwoofer.

In David Gray’s single “Back in the World” (16/44.1 FLAC, iht Records), the veteran singer-songwriter’s fingerwork on guitar lacked the bite and light-footed quality that I’ve heard from more expensive passive speakers, but it had satisfying presence. So, too, with Gray’s signature folksy delivery, which had a confident sense of drive and tonal color. What the HD6 lacked in ultimate resolving ability it made up for with a velvety sound. Even with a hot recording such as Adele’s “Rolling in the Deep,” from her 21, the leading and trailing edges of her voice weren’t reproduced with clinical acuity by the Audioengines, which instead produced a more euphonic sound. Allied with the punch of the kick drums in this track, and the soft piano chords in the background, it all added up to a relaxing, dulcet sound. 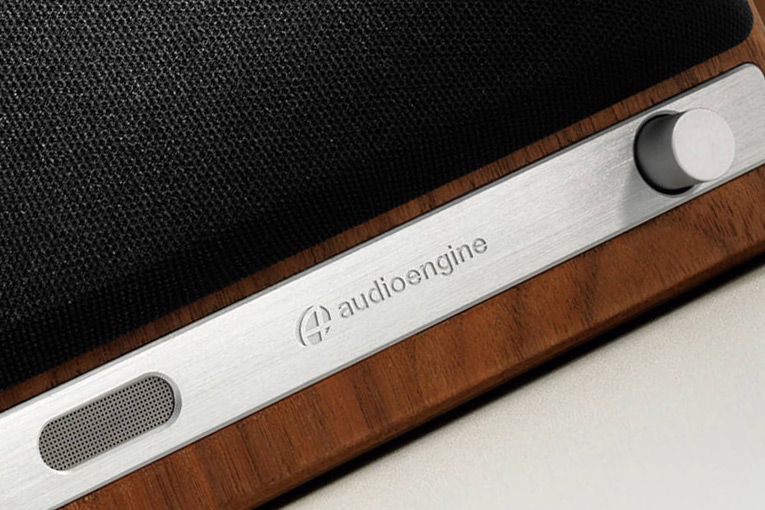 The HD6es could easily fill my small-to-medium-size living room with unspoiled, undistorted sound. When I cranked up “Dragula,” from heavy-metal icon Rob Zombie’s Hellbilly Deluxe (16/44.1 ALAC, Geffen), I was rewarded with even, composed sound up to reasonably high output. While the Audioengines couldn’t, in a larger space, replace a full-bore, high-fidelity sound system, they were perfect in my room. Whether in a living room or a bedroom, with a TV or by themselves, the HD6es will not only look the part, they should sound the part, too.

Shortly after the arrival of the Audioengine HD6es, Dynaudio’s Xeo 2 powered loudspeakers ($1599/pair) showed up for review. For roughly twice the price of the Chinese-made Audioengines, the Danish Xeos didn’t impress at first blush. Smaller than the HD6 in every dimension, especially depth, the Xeo 2 boasts a digital crossover, active DSP filters to maximize bass output, a silk-dome tweeter, 5.5” midrange-woofer, and amplifiers all designed and built in-house. Add Bluetooth connectivity and remote control, and the Dynaudio seems broadly similar in philosophy to the Audioengine for more than twice the price. What gives?

The proof was in the listening. The Dynaudio immediately impressed with a clearer, more forward sound. Its tweeter sounded far more spacious and sparkly, and its midrange had greater focus, resolving ability, and refinement. Most surprising, given the Xeo 2’s significantly smaller cabinet, was its bass drive. With a lower-end spec of 40Hz, -3dB, it promises much, and up to a certain volume level, it delivered. The Xeo 2 reproduced sounds below 50Hz not only with weight, but with impact as well. The drums in “I’m Not a Hero,” from Hans Zimmer’s soundtrack score for The Dark Knight (16/44.1 FLAC, Warner Bros.), came through the Dynaudios with surprising verve and athleticism -- there’s something to be said for well-executed DSP. By contrast, the Audioengine’s bass response was fuller and a touch looser.

Although the Audioengine offered more modest sound overall than the Dynaudio, I nonetheless felt comfortable pushing the HD6 louder than the Xeo 2, through which I heard some mild compression as “I’m Not a Hero” got raucous. Furthermore, the HD6 felt a bit more upscale than the far more expensive Xeo 2, with its largely plastic enclosure and plastic remote. While Dynaudio’s investment clearly went into its drivers and electronics, it’s just as clear that Audioengine put more emphasis on the factors that count to many buyers: aesthetics and tactility. Finally, the HD6’s Bluetooth circuits put nary a foot wrong -- I never had a problem establishing a wireless connection with my laptop and mobile devices, or with audio/video sync when playing programs from Netflix and HBO Go. I can’t say the same for the Xeo 2s -- I ran into a few problems with them on the consistency front.

While Audioengine’s HD6 isn’t the last word in transparency or neutrality, the fact remains that, from top to bottom, it’s a complete product in a way that few other audio systems are. It’s pretty and stylish, with a gorgeous real-wood finish. Its high-quality remote has a pleasing weight and solidity. Perhaps most important, its Bluetooth functionality was flawless in execution. Add to these its smooth midrange and properly punchy bass, and Audioengine’s HD6 is an easy recommendation for, well, just about anyone.