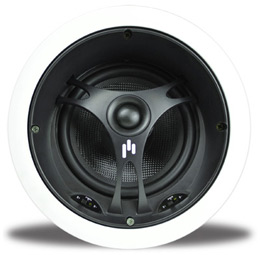 One of the great audio success stories of the past few years is Aperion Audio. The company emerged, seemingly from nowhere, to blow away reviewers and consumers alike with its great-sounding, well-built speakers at surprisingly low prices. Among Aperion’s newer products is its series of in-wall and in-ceiling speakers, from which I took on the Intimus 6-IC in-ceiling model ($149 USD each).

The 6-IC is robust -- it feels heavier in the hand than its claimed weight of four pounds would have you think. Included in the speaker’s overall dimensions of 9” diameter by 5” deep are a 6.5” woven-fiberglass mid/woofer, a 1” silk-dome tweeter, a frame to mount both drivers, a crossover, and a pair of binding posts. Aperion claims a (probably generous) frequency response of 50Hz-22kHz, but doesn’t specify to what tolerance (i.e., +1/-3dB). The 6-IC’s sensitivity is specified as 88dB; Aperion recommends a range of amplification of 20-200W.

The Intimus 6-IC’s tweeter isn’t quite coaxial. Mounted on a three-armed support in front of the mid/woofer, it’s angled off to one side rather than pointed straight ahead -- which means its output can be aimed. Simply rotate the entire speaker until the tweeter points at the desired spot, then lock it in place. If that provides too little or too much treble at the sweet spot, the driver’s output can be boosted or attenuated using a sliding switch mounted on the speaker’s frame. An identical switch offers the same boost or cut for the bass driver. Both switches also feature a neutral position.

Installation involved unboxing the 6-ICs and hooking up some wire. The Intimus is designed to be set into a ceiling, and I’d originally intended to use the pair of them for my A/V receiver’s surround channels. However, I decided that the surround-channel outputs would give me little to base a review on, so I put the speakers to use in my wife’s workout area. There they’d pull full-range duty, and would have to prove their boogie potential before they would be judged acceptable.

Calling our unfinished basement a “workout area” gives the space a classier name than it deserves. The first problem I faced was the fact that there’s no ceiling into which these in-ceiling speakers could be installed -- the only things overhead were exposed floor joists. The space between each pair of joists is 18 inches, and each joist has a lip along its bottom edge. Those lips offered perfect supports from which I could suspend 18”W shelves of medium-density fiberboard (MDF) from Home Depot. The shelves solved my lack of ceiling, and made cutting the holes and installing the speakers dead easy: I could do all the work on a bench, then just install the shelf between the joists.

Aperion includes two cutout templates with each 6-IC, one printed for the purpose, and the other, the cardboard ring that supports the speaker in its box, as a standby. I used the cardboard ring, as it made tracing circles of the right size on the shelf boards easy. Once I had my circle traced, I drilled a starter hole inside the circumference, inserted my jigsaw’s blade, and, about a minute later, had a more or less perfect circle. Installation in a normal ceiling would require less trouble: a simple one-handed drywall saw would make quick work of most ceilings.

It was perfectly fine that my circle wasn’t exactly round; each speaker has an edge lip more than wide enough to hide all but the grossest cutting errors. The holes cut, I inserted the boards between the selected joists and secured them in place with generous helpings of Blu-Tak, which also offered the advantage of isolating each board from the floor structure above. Next I pulled some previously installed Analysis Plus Blue Oval in-wall speaker cable through the hole and, setting the speaker on the top shelf of my stepladder, inserted the cable into the nice-quality binding posts affixed to each Intimus’s crossover circuit board.

I inserted fiberglass insulation into the new ceiling cavity I’d made, to cancel out any standing waves created by the speakers’ backwaves. I also made sure that each tweeter was aimed toward the center of the room. In making the 6-IC easy to install, Aperion fits each speaker with four little swing-out arms that act as compression clamps when a screw is turned. The first twist of the screwdriver forces the arms out into position (they remain tucked in to ease the insertion of the speaker into the hole), and each subsequent turn causes the arm to clamp down on the ceiling from the inside. I tightened the four arm clamps on each 6-IC and noted with satisfaction that both speakers were clamped tightly in place. All that remained was to put in place the metal mesh covers. Total installation time for both speakers: about 30 minutes.

For this review I dug out my old friend, Blue Circle Audio’s CS integrated amplifier. Not wanting to give up the Simaudio Moon CD3.3 in my main system, I paired the CS with an NAD C 515BEE CD player. Interconnecting duties were performed by TARA Labs’ RSC; the speaker cables were Analysis Plus Blue Oval. Anyone installing speakers in walls or ceilings would do well to use purpose-designed and certified speaker cable. No one wants to find out from their insurance agent that fire damage isn’t covered because a non-spec speaker cable shorted out inside a wall. 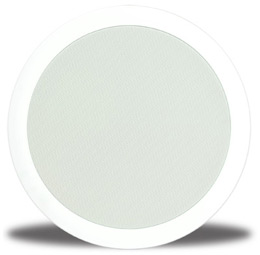 Speakers installed in a wall or ceiling are at a natural disadvantage to their enclosed cousins: They lack the benefit of a cabinet designed to get the best out of them. With that in mind, and given the Intimus 6-IC’s low price, I set my expectations fairly low. I couldn’t expect such speakers to perform miracles.

My initial reaction to the 6-IC was that the treble was too hot, the bass fairly weak. I therefore set the equalization switches to boost the bass and cut the treble, then left the speakers to cook over the course of a weekend. After that, the speakers had clearly broken in, so I started playing reference tracks while applying some coats of shellac to a woodworking project.

Now that they’d been run in, I noticed that each Intimus 6-IC had a much more integrated sound than before, when it seemed as if woofer and tweeter were having nothing to do with each other. The bass response tightened up nicely but was still on the weak side. There was, of course, no faulting the speaker for this -- a 6.5” mid/woofer can do only so much in that department. When I played recordings of sax-piano-drum jazz trios, the 6-IC didn’t sound as if it lacked anything much, especially at background listening levels. Lower volume settings were also well suited to reproducing pop and rock.

But when Mrs. Smith works out, she wants volume and pounding bass, two areas where the 6-IC’s weaknesses showed. Madonna’s Music (CD, Warner Bros. 47598), a workout favorite, was reproduced cleanly and pleasingly from the midbass up at a volume level that would preclude normal conversation, but there was no flesh on the low-bass bone. Again, I’d expected this; it represents not a performance flaw, but an inherent limitation of this type of speaker.

Things improved when I hooked up a Revel Concerta B120 subwoofer. With the bottom octaves now fully present, I found it much easier to enjoy the really quite good midrange and treble performance of the 6-IC. Male and female voices were clear, with no signs of congestion or shouting. Imaging wasn’t at all bad, considering the fact that the speakers were placed well above my ears -- but, for the same reason, the soundstage was a bit out of whack. Still, the 6-IC was good enough that I didn’t find myself wanting to switch back to conventional speakers at the first opportunity.

Having no other in-ceiling speakers to compare the 6-IC with, I had little choice but to pit it, admittedly unfairly, against a box speaker: the Mordaunt-Short Carnival2 ($299/pair). And though I couldn’t exactly A/B the M-S and Aperion models, I did have my experience of hearing in-ceiling speakers in other homes to fall back on.

I can’t provide makes or models, but I can say that most other in-ceiling speakers I’ve heard have sounded awful. I’m not talking about the kind of industrial speakers used in stores or elevators, but those found in kitchens and bedrooms across the land, which often sound thin, tinny, and distorted -- nowhere near hi-fi. However, the 6-IC was hi-fi. It made music sound like music, not like screeches emerging from a rusty tin can.

The 6-ICs offered a much more enveloping sound than the Mordaunt-Short Carnival2s, limited as the latter were to a terrestrial mounting. For the same reason, the Carnival2s projected a more realistic soundstage (music tending to be performed in a down-to-earth fashion), and could produce more substantial bass than the 6-IC, which I noticed most with kick drum. I thought the 6-IC more accurate in the midbass; the Carnival2 lacked some definition around the 60Hz level, which tended to make bass-guitar notes blend together. It was an honest draw between the soft-dome tweeters in each model, with no glaring errors or omissions to note.

As surround or background-music speakers, Aperion Audio’s Intimus 6-IC is a winner. I would never suggest that the 6-ICs replace conventional loudspeakers in a conventional system, but then the 6-IC was never intended to be all things to all people. Keeping its inherent limitations in mind, I can say that the Aperion Intimus 6-IC is a most satisfying in-ceiling loudspeaker.