Torque Audio t402v measurements can be found by clicking this link.

It’s a good thing most headphones are relatively inexpensive, because they’re the riskiest purchase an audio enthusiast can make. Headphones vary greatly in tonal quality -- more than speakers do, at least according to my ears and my measurement gear. Listeners’ opinions of headphones also seem to vary more than do their opinions of gear in other audio categories. Yet it’s rare to be able to listen to headphones before you buy. Sometimes you can check them out at a headphone meet or hi-fi show, but for the most part you have to rely on reviews written by people who may or may not share your taste in music and/or sound. 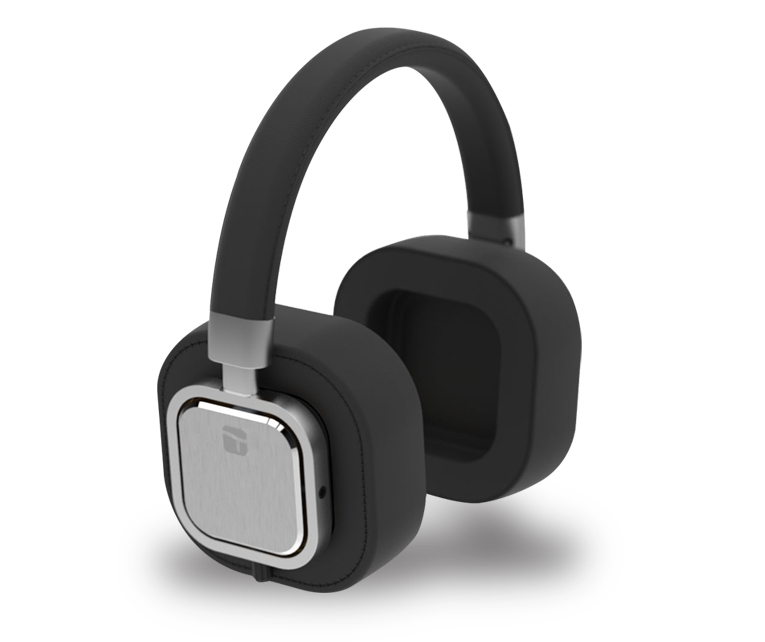 With the t402v, Torque Audio proposes a different concept: rather than hope the headphones you buy suit your taste, tune them to your taste. The t402v offers four tuning options, each accessible in seconds. Just pull off the magnetically attached earpad, turn it 90, 180, or 270 degrees, and stick it back on. Each earpad position opens a different array of vents in the enclosure, and thus changes the sound. The tunings represent four different levels of bass response below 300Hz. You choose a tuning by aligning its color inside the earpad with the top of the earpiece. Yellow has the most bass (and the smallest vents), followed by blue, then red, then black for the least bass.

What’s more, the t402v includes earpads for over- and on-ear wear -- you can switch to on-ear when you need something more portable. The character of the sound also changes when you switch from over- to on-ear.

This gives you a total of eight chances that the t402vs will deliver a tonal balance you like. You might also want to change the sound for different kinds of music: maybe a little more bass for hip-hop and rock, a little less for classical and folk -- or the other way around. We’ve seen tunable headphones before, most notably Beyerdynamic’s Custom One Pro over-ear model, and earphones with filters that change the response, from companies such as AKG, RHA -- and Torque. But nothing I’ve seen to date matches the t402vs’ versatility.

Inside each earpiece is a 40mm custom driver that uses a diaphragm of biocell instead of the usual Mylar. Torque claims that the biocell diaphragm has less mass than a Mylar diaphragm but is as much as five times stiffer, which would result in better sensitivity, more extended high-frequency response, and lower distortion. 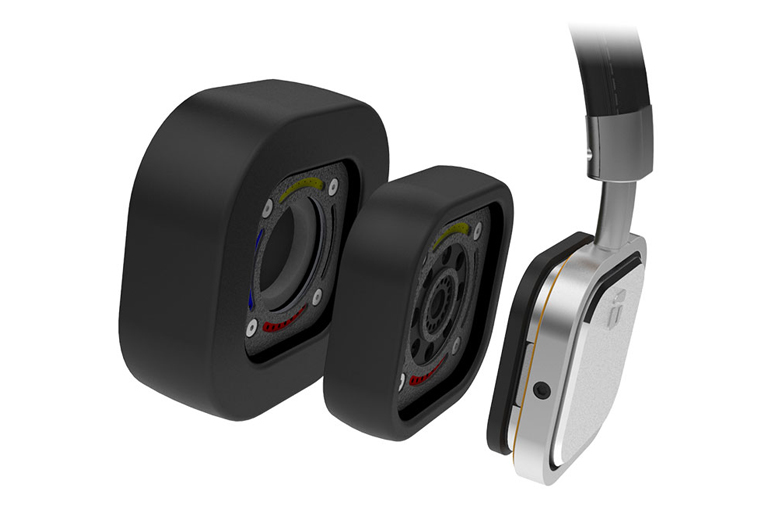 Torque is launching the t402vs on Kickstarter, where early donors can get one for $250 USD. When the Kickstarter campaign ends, they’re expected to retail for $399.95.

The Torque t402vs come with a zippered neoprene case measuring about 8” by 8” by 1.5” -- slim enough to fit in a computer case or an already stuffed suitcase. Also included is a small drawstring bag to hold whichever set of earpads you’re not using. The detachable cable has a three-button microphone and remote control that does play/pause and volume control with iOS devices (iPhone, iPad, iPod Touch), but only play/pause with Android devices.

I found it easy and fast to turn the t402vs’ earpads to tune the sound. Tiny neodymium magnets hold the pads firmly in place. It’s not quite as easy as flicking the tuning controls on the Beyerdynamic Custom One Pro -- you have to remove the t402vs to change the tuning -- but it’s easy enough.

The t402vs’ earpieces fold flat; the headphones fit into my laptop computer bag. This makes the Torques more travel-friendly than headphones with earpieces that don’t fold flat.

To me, the tension of the t402vs’ headband was perfect -- tight enough to keep the ’phones in place, but not so tight that I ever felt the earpads were mashing my temples or earlobes. The over-ear pads are unusually spacious inside; even my larger-than-average lobes fit without touching the edges. The cushioning of the on-ear pads is sufficiently luscious that I was able to use them for 90 minutes straight before my ears wanted some fresh air.

Given their compactness and sleek design, the Torque t402vs seem intended mostly for on-the-go listening, so I tested them mostly using my iPod Touch or my Samsung Galaxy S III smartphone. I also tried using an Aurender Flow headphone amp-DAC as the source device, which didn’t have a major effect on the Torques’ tonal balance but did give me extra volume (which can come in handy when you’re using the over-ear earpads).

The t402vs were much more complicated to review than most headphones because they have not one sound but eight. Not only does their sound character change when you turn the earpads, it changes when you switch between their over-ear and on-ear pads. In general, I preferred the sound of the on-ear pads: it was a little less bassy, and more open and spacious. This surprised me, because the on-ear pads actually put more foam between your ears and the drivers.

The differences among the tuning modes were subtle enough that I found myself often changing among the black (least bass), red (second-least bass), and blue (second-most bass) modes because they all proved useful. To me, this was as it should be; with some of the tunable earphones I’ve tried, the differences between modes are so great that only one of them sounds in any way good to me. With both sets of t402v earpads, the yellow mode was too bassy for my taste -- almost as bassy as some of the hip-hop-oriented, celeb-endorsed headphones, though without the sizzling treble many of those models have. 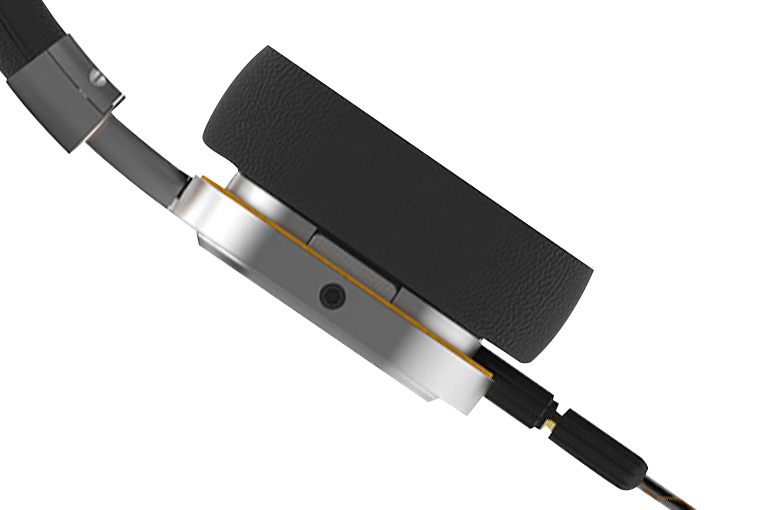 Even when switching among tunes by the same artist, I sometimes found myself changing tuning modes. For example, when sampling a bunch of R.E.M. songs using the over-ear pads, I liked blue mode (second-bassiest) for the lighter, janglier “Gardening at Night,” from Chronic Town (256kbps MP3, A&M), which sounded a little thin and edgy in black mode (least bassy). But with the more dynamic, more driving, better-recorded “Driver 8,” from Fables of the Reconstruction (256kbps MP3, A&M), I liked red mode (second-least bassy) because this track didn’t need the extra kick.

When I tried streaming from YouTube a version of “Sitting Still,” from R.E.M.’s Murmur (128kbps AAC streaming rate, data rate of original source file unknown), I went back to blue mode for a little more bottom-end oomph, because the level of the file was somewhat lower than the others. This also highlighted a problem with the t402vs: Their sensitivity is low with the over-ear pads, which, according to my measurements, deliver 7.7dB less output on average than the on-ear pads. The level was always satisfying with a decent-quality source file or stream played through my iPod Touch and Samsung phone, but when I needed more headroom, I couldn’t get it with the over-ear pads.

If you want more of a purist, audiophile-grade sound, try the on-ear pads in black mode (least bassy). This mode didn’t sound at all thin -- I still heard plenty of bass from the title track of Steely Dan’s Aja (16/44.1 FLAC, MCA) -- but it was the only one that never seemed to push the bass even slightly. For example, when I played “Whispers from Eve,” from Nels Cline and Julian Lage’s Room (16/44.1 FLAC, Mack Avenue), the guitarists’ acoustic axes sounded natural with the on-ear pads in black mode, with just the right balance of warmth and twang plus a nice sense of space. When I switched to the over-ear pads in black mode, the guitars still sounded good, but the body was a little exaggerated and some of the spaciousness was lost; it sounded more like close-miked guitars recorded hard left and right than two guys playing in the same space. But with rock and hip-hop tunes, the greater bass and more focused sound with the over-ear pads often better suited my taste than the sound with the on-ear pads.

I spent a lot of time listening to both sets of earpads in all modes except yellow, but I kept coming back to the on-ear pads in black mode. I loved black mode so much because, while the tonal balance seemed subjectively flat, the dynamics and clarity almost made every instrument sound as if it had been boosted. In “Bolivia,” from Sam Jones’s Something in Common (256kbps MP3, 32 Records), the definition and drive of Jones’s double bass was outstanding, Cedar Walton’s acoustic piano sounded detailed and spacious, and the trombone, trumpet, and tenor sax had that dynamic, swinging-for-the-fences sound embodied by this great album. Even during the horns’ unison sections, it was easy to pick them apart on the stereo soundstage. 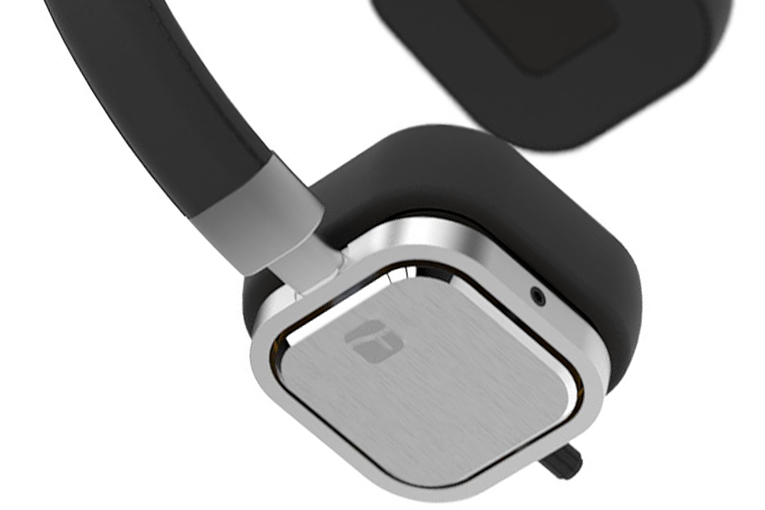 When I compared the Torque t402vs in their most neutral-sounding configuration (on-ear pads, black mode) with NAD’s Viso HP50 over-ear headphones ($299), which are something of a reference for me and for many other headphone enthusiasts, the NADs sounded a little more spacious and somewhat flatter in response. I’d say the HP50s’ was the more natural sound overall, although some criticize the NADs for having not enough bass. The advantages of the t402vs were that they could muster more bass (a little or a lot, your choice), and their mid- and upper treble sounded a little smoother to me.

There’s one thing I’d have tried to do differently with the t402vs. Some headphone enthusiasts are drawn to more trebly sounding models such as Audio-Technica’s ATH-M50s, probably because they produce an impression of more detail. I don’t agree with this approach; I’ve noticed that, usually, the more experienced the headphone listener, the less he or she is impressed by an exaggerated top end. Still, though, many people do like this sort of sound, and the Torques didn’t do it. I’d like to have seen a more treble-heavy tuning option instead of the megabassy yellow mode.

Usually, when I review headphones, I have to try to figure out what kind of taste in sound the model in question will appeal to. That’s not the case with the Torque t402vs. As long as you don’t crave trebly sound, it’s hard to imagine that you won’t find two or three or even four of the t402vs’ eight distinct sounds that appeal to you. And the facts that the t402vs are so beautifully designed, with comfortable earpads, easy portability, and great looks, make them even more appealing. At its Kickstarter price of $250, the t402vs are a great bargain. At their expected retail price, they start to look expensive; but $399.95 is actually the same as or $100 higher than the prices of most of their serious competitors -- and there’s a much better chance you’ll like the Torques’ sound.