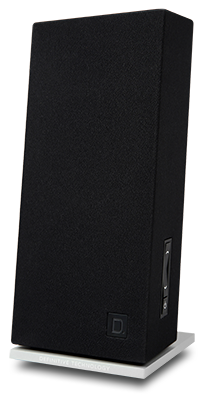 Definitive Technology is one of my favorite loudspeaker manufacturers -- not only because the company is innovative, but because its speaker line consists of models that punch way above their price class. Not many other speakers costing only $1998 USD per pair can boast the full-range performance of my reference DefTech BP-8060ST towers. Not only that, they sound fantastic throughout their 20Hz-30kHz frequency response, and their footprint is very small. What’s not to like?

One of my least favorite consumer-electronics categories is computer speakers -- to me, almost all of them sound bad. I remember hooking up a pair of plastic computer speakers through 1/8” minijacks to my computer’s soundcard -- an experience memorable for all the wrong reasons. So when Editor-in-Chief Jeff Fritz asked if I wanted to review Definitive Technology’s Inclines, I was at first apprehensive when I heard the phrase desktop speakers -- it sounded to me like computer speakers. But this was Definitive Technology, and I was intrigued to hear what the company could do in this category. And the Incline’s price of $399/pair set my expectations high.

The Incline is called that because it slopes back from the vertical at an angle of 9.5 degrees. This, DefTech claims, aims the drivers’ output directly at the listener’s ears when the speakers sit on a desktop, so that the direct sound predominates over the off-axis sound. At 11.3”H x 5”W x 4.4”D, the Incline is bigger than other desktop speakers I’ve seen, but still small enough to sit atop most work surfaces with a computer between them. The speaker is finished in typical DefTech fashion: it’s completely covered with black fabric, and sits on a base of solid aluminum. Overall, the speakers look high-tech and cool, and perfectly at home when placed to either side of an Apple iMac.

Under the black cloth, the Incline packs some unusual and intriguing engineering. The most unusual is that it’s an example of the bipolar design seen in a slew of DefTech’s tower speakers. In this context, bipolar means a speaker with drivers mounted on its front and rear surfaces, to produce a more spacious soundstage than conventional speakers. I can’t recall having seen or heard of any other bipolar desktop speaker. Each Incline has three drivers: on the front, a 0.75” silk-dome tweeter and 4” polycone midrange-woofer; and, on the rear, a 2” cone that DefTech calls a “high-definition full-range driver.” A front-firing, 4” passive radiator enhances the bass response. 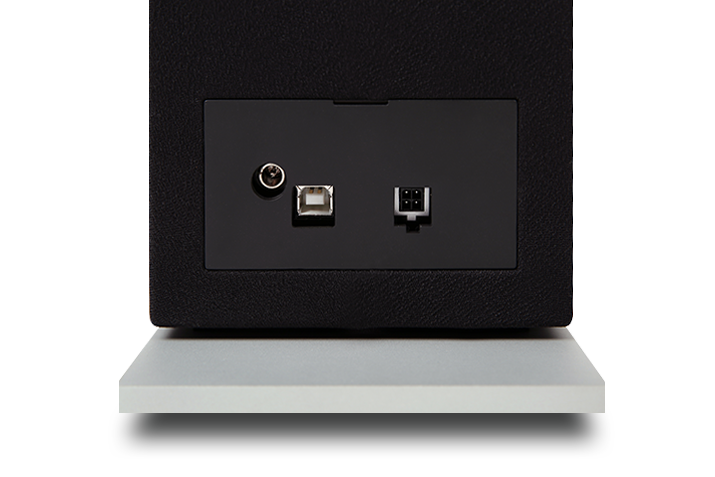 Also unusual is the fact that each Incline is biamped by two 20W class-D amplifiers, for a total of four amps per pair. The drivers’ responses are tailored by digital signal processing (DSP) to get useful output down to 45Hz. You can hook up the speakers to your computer, or to any other source, in three different ways: USB, optical TosLink, or 3.5mm minijack. Only the USB port is visible on the rear panel, however. To access the other two inputs, you have to pry open the plastic panel on the back of the right speaker. There you’ll also find an output minijack for connecting a Definitive Technology subwoofer.

I tried the Inclines with a number of computer devices: an ancient Acer Aspire 1810T laptop running Windows 7, JRiver Media Center 17, and foobar2000; an Acer Android 4.1 tablet, model A1-810; my wife’s Apple iMac; and my kids’ fourth-generation iPod Touch. The DefTechs worked flawlessly with all but the Android, where I had problems with the USB output -- I could get sound through the Inclines, but only at quarter speed. Although this was amusing, it was clear that the tablet hadn’t been designed for this sort of use, and I couldn’t solve the problem. Nor was it the first time I’d had this problem with this tablet -- it hasn’t worked with any of the outboard DACs I’ve used lately, such as the Furutech ADL X1 or the NuForce uDAC-2. I did the bulk of my listening using my laptop. There’s no need to download an ASIO driver (there isn’t one), and Windows 7 immediately recognized the Inclines, which its sound panel identified as a “USB Audio DAC.”

One of the coolest things I learned from evaluating the DefTechs is how fun nearfield listening can be. The Inclines’ 9.5-degree tilt made it easy to move them to positions that maximized imaging. I found the best positions in my setup were 2’ apart, with the drivers angled in toward my ears.

With the setup described above, listening through the Inclines to Chesky Records’ Binaural+ recordings, such as Amber Rubarth’s Sessions from the 17th Ward (24-bit/96kHz FLAC, Chesky), was magical. In “Good Mystery,” the depth of imaging was as good as I’ve heard through a desktop setup. I could easily “see” Rubarth at center stage, with violinist Tim Snider and cellist Dave Eggar on the right, but layered behind. I got a clear sense of the recording space (a church), with the reverberations of Chuck Palmer’s drums bleeding into the left channel.

To test the high frequencies, I played one of my favorites, “Keith Don’t Go,” from Nils Lofgren’s Acoustic Live (16/44.1 FLAC, The Right Stuff/Capitol). Lofgren’s acoustic guitar can expose a bad tweeter design -- you can hear individual notes being plucked and this can sound gritty through poor speakers. The Inclines could play this track loud, and every bit as involvingly as I’ve heard it through much more expensive systems. They didn’t shy away from that last bit of detail, reproducing it with just a slight rolloff of the highs -- a good design decision for this price, in my opinion. 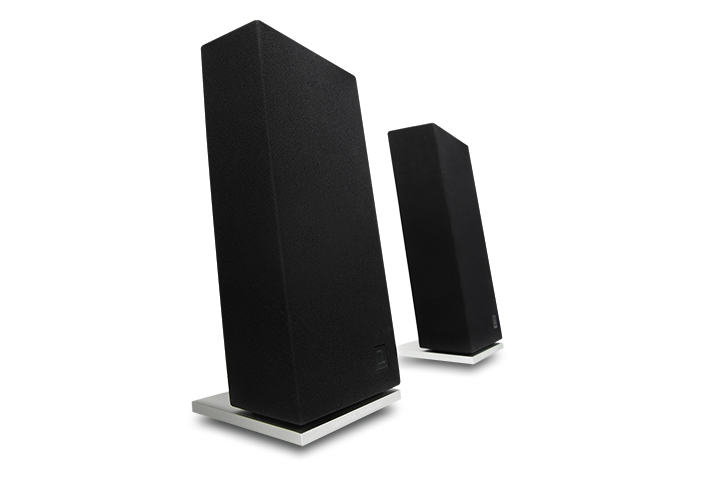 To get a sense of the Inclines’ ability to reproduce low frequencies, I cruelly played “Temple Caves,” from Mickey Hart’s Planet Drum (16/44.1 FLAC, Rykodisc). This track contains very low bass and is challenging even for a dedicated subwoofer. Understandably, the Inclines couldn’t -- and didn’t -- reproduce any of the room-shaking bass that has made “Temple Caves” a low-end demo track for decades. Bass freaks will have to accept what this system can do, or opt for the matching subwoofer (when that becomes available) to fill out the bottom end. However -- and surprisingly -- the Inclines’ solid upper-bass response went low enough to help me appreciate bassist David Piltch’s playing in the title track of Holly Cole’s Temptation (16/44.1 FLAC, Alert).

In addition to listening to the DefTechs in the nearfield on a desktop, as they’re designed to be used, I connected the optical digital output from my TV to the Inclines’ digital input, and watched TV while working out on my treadmill. Although this isn’t a recommended way of working out, it gets me down to my exercise room, and proved to me that the Inclines were up to the task, even as I struggled. I’d placed the Inclines some 7’ away from the treadmill, and dialogue was loud and intelligible over the raucous treadmill and my heavy breathing.

I also tried the Inclines in a more serious setup, using the digital outs of my Cambridge Audio Stream Magic 6 and my Oppo BDP-95 Blu-ray player. With both, I had fantastic results with music and movies. The Inclines played clearly, with good dynamic range.

For this section I used the system hooked up to a TV in my exercise room: an 80Wpc AudioSource Amp One stereo amplifier and a pair of DefTech ProMonitor 1000 speakers. This was a good monetary match for the Inclines; the amp, now discontinued, sold for $150, and the speakers cost $440/pair.

The two systems differ in connectivity: The AudioSource-DefTech combo is strictly analog, with two sets of RCA inputs, while the Inclines have a combination of analog and digital connections, including USB, optical inputs, and a 3.5mm minijack. When I streamed TV shows from Netflix using my Western Digital TV Live Plus media player, the Inclines displayed a more pleasant high-frequency response -- the ProMonitor 1000s sounded brighter in comparison. The bass response, too, was better through the Inclines, with DSP compensating for the smaller enclosure. The ProMonitor 1000 is probably the more accurate speaker -- it’s very neutral, perhaps with less “voicing” -- but I found the Inclines were easier to live with for their connectivity, size, and all-in-one design. If I had to reconfigure my exercise room’s audio system right now, I wouldn’t hesitate to choose the DefTech Inclines as my primary speakers.

Despite my reservations about computer speakers, the Definitive Technology Inclines comprise a well-made, well-designed, powered speaker system. The highlight of my time with them was their phenomenal imaging, especially in the nearfield. Although their small size and low price have necessitated inevitable design compromises, those trade-offs were minor compared to how well the Inclines provided an immersive desktop listening experience. I have no hesitation in recommending the Inclines to anyone who wants a high-quality computer speaker system, or as the main system for a small bedroom or apartment. You won’t be disappointed.