Audio Performance AF140 measurements can be found by clicking this link. 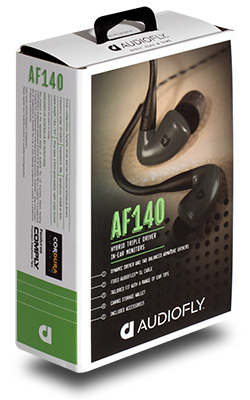 The headphone biz sure has changed in the last few years. Obviously, lots of companies have been getting into it, but that was 2011’s trend. Today’s trend involves what’s been happening to those companies that have been at it since then. Some of them are getting better.

It’s no secret that many, perhaps most, companies that have recently entered the headphone market began by slapping their logos on models made by some faceless original design manufacturer (ODM) no consumer in the Western Hemisphere has ever heard of. What’s happening now is that some of those companies have decided that, in order to compete, they have to get serious. Mass-marketers such as Beats, House of Marley, Skullcandy, and others have brought in heavy-duty engineering talent and spent tens or even hundreds of thousands of dollars on test equipment. As a result, their ’phones are getting better, with a more consistent “house sound.”

I don’t know if or how Audiofly has added to its engineering resources over the last few years, but it’s obvious that this Australian company has learned a lot since it entered the market in 2011. Its first earphones had an appealing industrial design and pretty good sound overall, but I found that their sonic signature varied from model to model.

After originally focusing on earphones retailing for under $100, Audiofly is now stepping up to the high end with its Performance models. This new series of in-ear monitors features multiple drivers per ear: from two in the AF120 ($249 USD) to four in the AF180 ($549). All Performance models are intended at least partly for use as onstage monitors, which is fitting: Audiofly was founded by musicians.

In the middle of the line is the Performance AF140 ($349). It’s a hybrid design: each ear is served by one dynamic and two balanced-armature drivers. Dynamic drivers are tiny versions of the ones found in loudspeakers, with a magnet, voice coil, and diaphragm. But in a balanced-armature driver, instead of a voice-coil, a sort of miniature, motorized teeter-totter moves the diaphragm. Dynamic drivers are generally considered to have more robust bass, balanced-armatures more delicate and detailed treble; thus, the AF140 is intended to be a best-of-both-worlds hybrid design. Most of the hybrid earphones I’ve heard so far, the Sony XBA-H1 excepted, haven’t impressed me. But Audiofly’s been making hybrids for a while, beginning with the AF78 ($199), so maybe they’ve learned something.

As befits a $349 pair of earphones, the AF140s come with a snazzy carrying case -- but not one of those rich-guy, carbon-fiber/stainless-steel cases. This is more a Brooklyn-hipster thing: brown canvas outside, suede inside.

Included are six sets of eartips: plus three sizes each of triple-flange silicone tips and Comply foam tips. This is, in my opinion, awesome. Some people love Comply tips, some don’t, but everyone ought to at least give them a try. For some ears, Comply tips deliver an incomparably tight seal and, thus, superior sound quality. The AF140s’s sound tubes have the small (4mm) outside diameter found in many other high-end in-ear monitors; if none of these standard tips work for you, you can probably find alternatives. 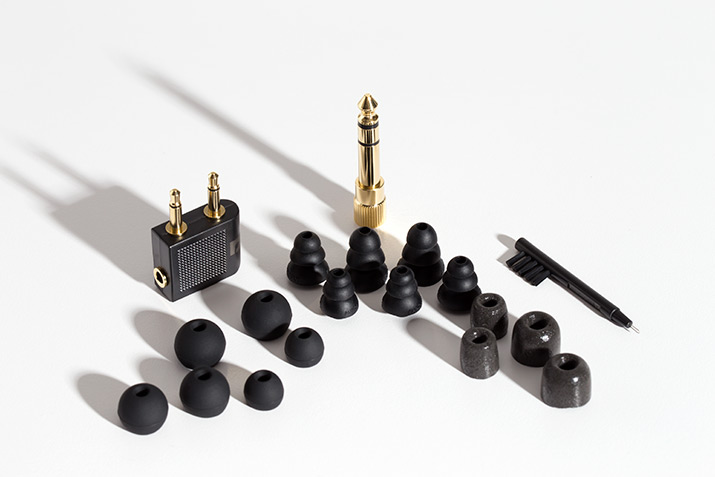 There’s also a 1/8”-to-1/4” (3.5 to 6.2mm) plug adapter, a dual-mono-to-stereo adapter for use on the dwindling number of airliners with dual-mono headphone jacks, and a tiny cleaning tool/brush for cleaning earwax out of the earphones.

The big difference between using the Audioflys and typical earphones is that, like most other high-quality in-ear models, the AF140s route the cables behind the ear. This is a good thing -- the earpieces fill your ear better, for improved isolation from external sounds. It also helps the earpieces stay put. 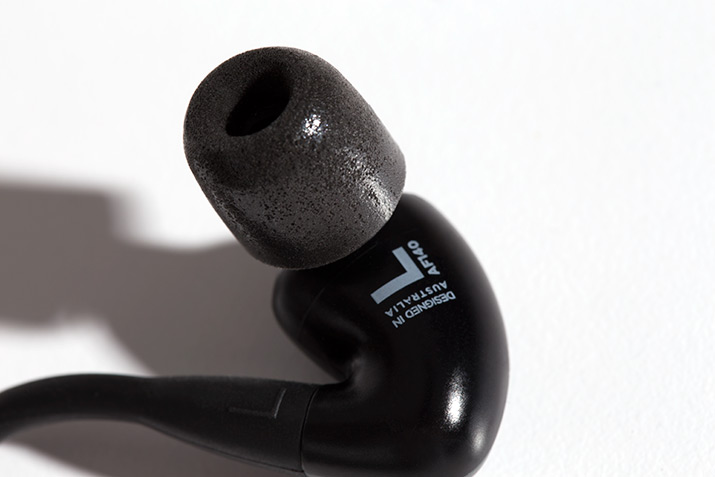 You have to get used to routing the cables over your earlobes. But the first couple of inches of the cables coming from the earpieces are stiff, and can be bent to precisely fit your earlobe. I’ve used many ’phones of this type, and depending on how the cable is made, they can be a pain or a delight. The AF140s were a delight. I had no problem getting a great fit, routing the cables around my ears, and getting them to stay put.

The AF140s worked just fine with portable devices and with separate amps; I could plug them into just about anything and get plenty of volume.

The most interesting result of some of the newer headphone companies learning the ropes is that headphones -- at least the good ones -- are starting to sound more similar. There are still plenty of really wacky ones, but most of what I’m being sent for review these days sounds reasonably good.

It didn’t take long for me to hear that the Audiofly AF140s are pretty straightforward-sounding, well-voiced earphones. For my first few hours of casual listening (after my usual ten-hour break-in period with new ’phones) to various jazz and rock tunes, no particular tonal colorations or technical flaws distracted me. I was able to relax, forget about the gear, and focus on the music -- which, of course, is the whole point of buying any good audio gear. Later, I dug in with more demanding recordings and was able to define the AF140s’ character, but it’s important to note that, right off the bat, I just basically liked these earphones. 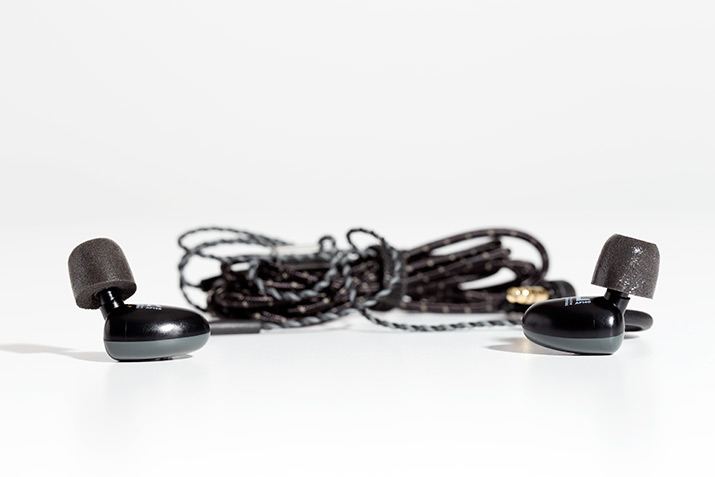 One of my favorite all-around test tracks, “Rosanna,” from Toto’s Toto IV (16-bit/44.1kHz WAV, Sony), was extremely revealing of the AF140’s sound. The mids were very smooth, sounding distinctly flatter and more natural than with other in-ears I had on hand, including NAD’s Viso HP20 and Westone’s ADV Alpha, each of which has a single dynamic driver for each ear. In voices I noticed a slight emphasis, probably around 4kHz, that added just a touch of coarseness but also made the words a bit easier to understand. I also noticed a great sense of space, with little details -- such as the congas in the left channel -- seeming to float around my head, and the entire track just oozing with trademark 1980s reverb.

It wasn’t perfect. I noticed that the highest frequencies -- the cymbals’ upper harmonics, for instance -- seemed a bit less lush and detailed through the AF140s than through the NAD HP20s. (Which just goes to show how little you can generalize about the sound of specific driver types.) I also noticed that the AF140s’ bass was a little soft, and perhaps 1 or 2dB more elevated than I like. The sense of precise electric-bass punch in “Rosanna” and almost every other pop recording done in Los Angeles in the 1980s was definitely softened. The bass seemed tighter through the NADs -- but it was also considerably lower in level, so it’s tough to say with confidence that it actually was tighter. 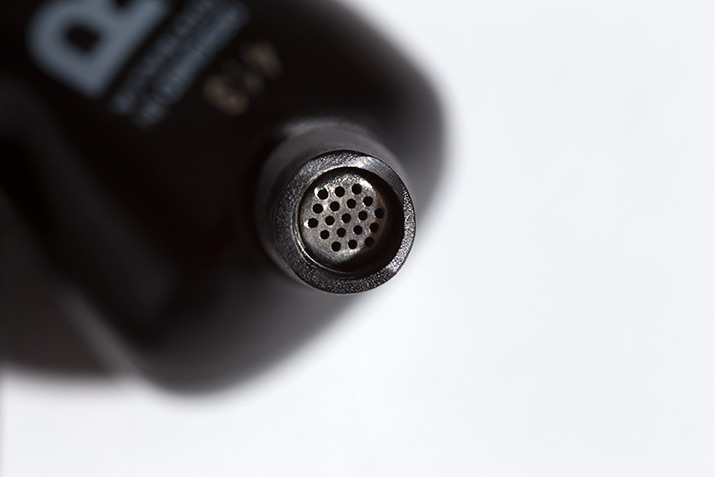 One of my newest and most demanding headphone test tracks is from Dr. Chesky’s Ultimate Headphone Demonstration Disc (16/44.1 WAV, Chesky). Track 5, “War,” a percussion piece, was simply stunning through the AF140. The nice feeling of space that had been hinted at in “Rosanna” swelled into something uncanny as the soundwaves of the drums in “War” slammed against the walls and ceiling of the church where the recording was made, bounced back to the recording microphone, then intermingled with each other to create a sense of ambience that seemed almost impossible, considering it was coming from a couple of little transducers the size of pistachio nuts.

Even Deep Purple’s Made in Japan, from 1972 (16/44.1 WAV, Warner Bros.) -- a remarkably pure live recording when compared to the live rock albums of the last 20 years -- was spacious and compelling through the AF140, Ritchie Blackmore’s guitar sounding especially (and appropriately) colossal. Just as in the Toto tune, the bass was on the soft side; some of the subtleties and immediacy of bassist Roger Glover’s right-hand plucking were lost. (And no, I’m not joking -- Glover was tight, in my book one of the best and most overlooked bassists of the 1970s.) 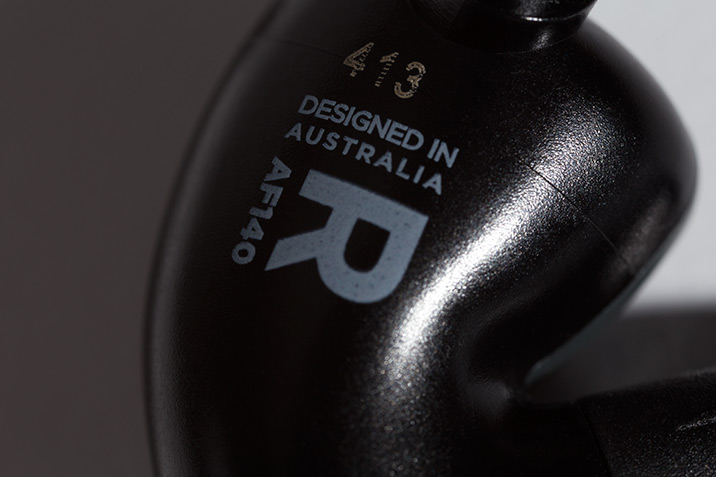 Another recent favorite, “Viva Las Vegas,” from Holly Cole’s Night (16/44.1 WAV, Tradition & Moderne), reprised much of what I’d heard before: generally smooth vocals, with just a trace of coarseness in the lower treble; an inviting and addictive sense of space; a less than lush upper treble; and a powerful, fairly soft bass. The somewhat amped-up bass in this track had the subjective effect of dulling the sound a bit; I found myself wanting to dial it down just a tad.

I think probably just about anyone would like the Audiofly AF140s. Who would love them? Listeners who want a neutral, natural, spacious sound in the mids and treble, combined with some extra bass power. In my experience, that describes a lot of people, even some audiophiles. For my taste, the bass had a bit too much volume and/or not quite enough definition. Despite that, I found myself listening to the AF140s for hours and hours after I’d finished my formal listening for this review. That’s gotta tell you something. 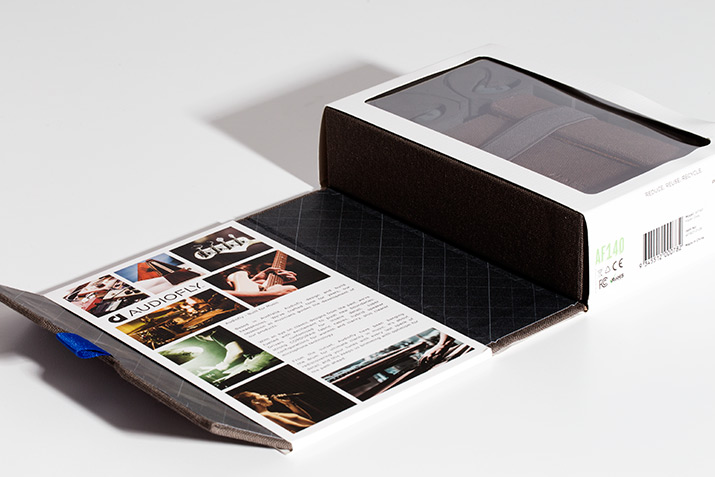 I think I’d want to spend the extra $100 for Audiofly’s AF160 earphones, which replace the AF140s’ dynamic drivers with another balanced armature, and include detachable cables. I got to listen to the AF160s for a little while because that’s the model Audiofly originally sent for this review. Unfortunately, a couple of hours into my listening, a flaw in the design of the cable connector took out one of the earpieces in the review units (which apparently were engineering, not production samples), but those couple of hours were pretty magical. The sound was neutral, involving, and exciting. Last I heard, Audiofly was in the process of redesigning the AF160s’ cable connection; maybe, someday, I’ll get another chance to hear them.