Viso HP20 measurements can be found by clicking this link. 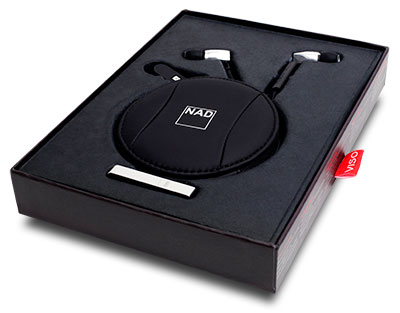 To say that Paul Barton set the audio world on its ear when he introduced the PSB M4U 2, his first headphone design, wouldn’t be exaggerating. Before Barton created the M4U 2, he read all the research he could find about voicing headphones. This led him to design the M4U 2 with a response that, while somewhat idiosyncratic, made many other headphones suddenly sound a lot less good. Barton was attempting to better re-create the sound of real speakers in a real room, and according to most listeners, he succeeded. He called his new voicing RoomFeel.

The HP20 is obviously a serious effort, incorporating Barton’s voicing, elegant and rather macho-looking (for earphones, anyway) industrial design, and a machined-aluminum shell that encloses each 8mm dynamic driver. It’s available in black or silver finish.

The Viso HP20s include pairs of silicone-gel eartips in five sizes, to help ensure that you get the optimal fit -- a great feature omitted by many headphone manufacturers. As Val Kolton, founder of headphone maker V-Moda, once told me, “With in-ears, the fit is the sound.” By that he meant not that fit is everything, only that, without good fit, you can’t get good sound.

The HP20s’ flat cable has an inline microphone/remote compatible with Apple iOS devices (iPhone and iPad). With Androids, the remote works only for the play/pause function. A Neoprene carrying case is included.

None of the five sets of eartips included with the Viso HP20s were big enough to create a good seal in my ear canals -- the earpieces fit loosely, and I got no bass. My ear canals are larger than average, but of the zillions of other earphones I’ve tested, only a few, most of them Klipsch models, haven’t offered tips big enough to fit me. However, the Viso HP20s’ 6mm flange accommodates most standard eartips, so I did just fine with some generic tips from another set of ’phones, and later with some Comply foam tips, which I ended up using for all of my focused listening. 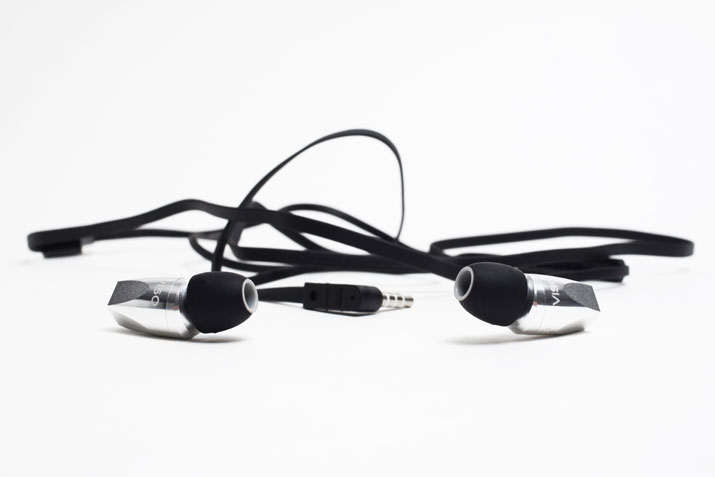 The flat cable produced a lot of handling noise: dull thumps and scratches as the cable rubbed and bumped on my clothes -- the HP20s won’t be great for jogging or the treadmill. But I doubt Paul Barton had exercise in mind when he designed them; as the HP20s’ webpage claims, “[W]e don’t care about your lifestyle. We care about your ears.”

It felt to me as if the HP20s’ earpieces stick out a little more than average, but not dramatically so. This wouldn’t bother me on a plane or on public transit, but it might bug me if I’m wearing the NADs while moving around a lot, as when I’m running the weed whacker.

Once I’d gotten the eartip situation straightened out, I popped in the Viso HP20s and put on Toto’s “Rosanna” (256kbps MP3, Columbia), my favorite way to get a quick idea of a pair of 'phones’ tonal balance: the relative levels of bass, midrange, and treble. Being super-familiar with the sound of NAD’s Viso HP50 over-ear headphones, I was surprised to hear that the HP20s seemed to have a peak in the lower treble at somewhere between 2.5 and 3kHz. I switched to the Westone Adventure Alpha, dynamic earphones that, to me, sound neutral. Yep, the HP20s definitely sounded trebly. At least for the moment.

I thought I’d just listen to the HP20s for a while to see if my ears could adjust to their tonal balance. Shockingly, I adjusted in a matter of minutes. After three or four random tunes played from my iPod Touch, the HP20s’ balance sounded just right. It’s common for most people’s ears to grow accustomed to the sound of a certain audio product, but for me, that process usually takes days or weeks. Perhaps I at first recoiled from the NADs’ voicing simply because I wasn’t used to it, then quickly realized its merits -- much as I initially hate every new rock band, but can grow to love them after hearing just a few nice melodic or harmonic twists. 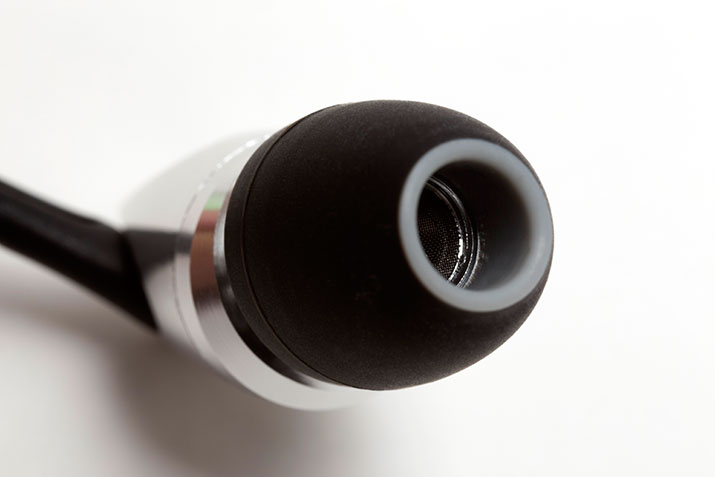 Now I wanted to hear if RoomFeel would work with earphones. For that, I needed a recording with a nice sense of ambience, so I put on “Booker’s Garden,” from Rabo de Nube, a live album by saxophonist Charles Lloyd (256kbps MP3, ECM 2053). Lloyd begins the tune with a solo on alto flute, which through the HP20s sounded centered, almost monophonic, with just a subtle hint of ambience. But when Jason Moran’s piano kicked in, the sound suddenly got much, much bigger, and I got a compelling sense of the acoustic of the venue: the Theater Basel, in Switzerland. Compared to most earphones I’ve heard, the soundstage was bigger, more natural, and, yeah, more like what I’m used to hearing from speakers in a listening room.

Another gratifyingly ambient recording, jazz trumpeter Lester Bowie’s take on “I Only Have Eyes for You,” from his album of that title (16-bit/44.1kHz WAV, ECM), caused me to jump a bit when I heard the first few notes. For in-ear monitors, the sound was huge. It sounded as if it had been recorded in a medieval cathedral, instead of in a little studio in Brooklyn with lots of fake reverb trying to simulate the sound of a cathedral. I’ve heard this recording thousands of times -- the HP20s must have been doing something special to have so surprised me.

I was also surprised to hear how close the HP20s sounded to the HP50s. The tonal balance was remarkably similar, the HP20s delivering a tad more low and midbass, and less energy and detail in the mid- and upper midrange. These differences weren’t readily apparent, and I’m pretty amazed that Barton was able to make these two completely different products sound so much alike. 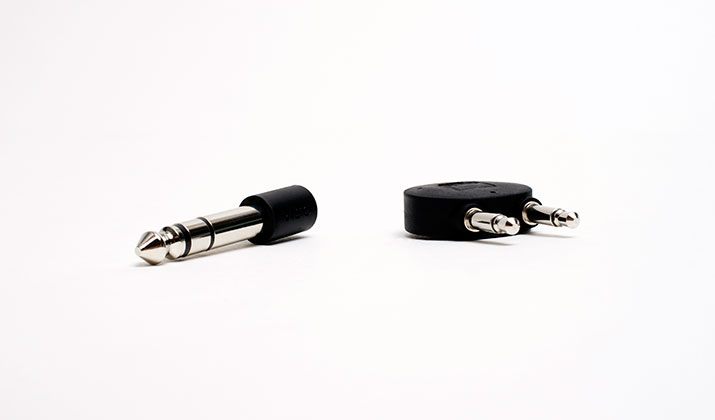 That said, it seemed to me that the RoomFeel thing works a bit better in the HP50s. Through those relatively large, over-ear ’phones, I got a more natural sense of being in a real listening room. With the HP20s, the ambience of the Charles Lloyd recording had a somewhat boxier, more resonant feel, sounding more like an audio system in a room with thin wood paneling, rather than one in a well-constructed listening room. My guess is that the extra midrange energy I heard in the HP50s made the difference.

The HP20s didn’t make everything sound huge, though. From an ambience standpoint, they just made things sound right. “Nancy Jane,” from the revivalist group Crow Quill Night Owls’ Snake Liquor (16/44.1 WAV, self-released), sounded as if it had been recorded in a small, intimate space -- maybe a log cabin. There was just a bit of reverberance from the resonator guitar, banjo, and voices, with the washtub bass sounding . . . well, I guess as tight as a washtub bass can sound.

But yeah, I know: You want to know how this thing sounds with metal, right? Pretty good, yet different from what I expected. Listening to the Cult’s “Love Removal Machine” (16/44.1 WAV, Beggars Banquet), and other 1980s and ’90s metal classics, I found that the HP20s delivered a powerful, but never overpowering, bass energy that came in only when needed, kind of like a well-integrated subwoofer. Many headphones with solid bass start to amp up their bass output somewhere around 200Hz, which can make them sound bloated. With the HP20s, the bass was there when I needed it, never when I didn’t. 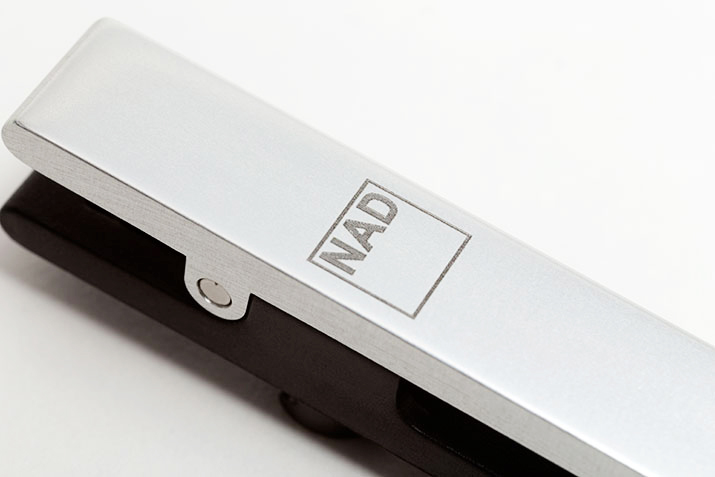 Every once in a while, that brightness I’d at first noted did reappear, but this depended very much on the recording. In the Lester Bowie recording, the snare drum -- the track’s most potent source of lower-treble energy -- definitely sounded thin and trebly. But when I played Steely Dan’s “Aja” (16/44.1 WAV, MCA), the HP20 didn’t sound even the slightest bit trebly. In fact, it sounded a little on the warm side. Switching to Holly Cole’s version of “I Only Have Eyes for You,” from her Night (16/44.1 WAV, Tradition & Moderne), I again heard brightness in the snare.

I wanted to compare the Viso HP20s to the Sony XBA-H1s, which I reviewed last month, but I couldn’t find the Sonys in my piles of review samples. I did, however, have on hand for a little shoot-out the Westone Adventure Alpha and the Torque t103z earphones. The Adventure Alphas ($199) sounded mellower than the HP20s by a margin of a few dB in the treble; I love that the Adventures never sound bright, but they don’t sound as detailed as the NADs. The Torque t103z’s ($179), with their green (“balanced”) tone filter installed, sounded similar to the HP20s, with a little more bass, a somewhat softer treble, and a little less detail.

With the NAD Viso HP20s, Paul Barton proves that his RoomFeel concept can work in earphones. I don’t think RoomFeel works as well or as dramatically as in the Viso HP50 over-ear ’phones, but it’s close enough that any owners of the HP50s, or PSB’s M4U 1s or M4U 2s, would be very happy with the sound. And so, I think, would practically anyone who hears the Viso HP20s. I doubt the existence of any earphones that every listener will love -- people’s reactions to headphones seem to be too varied to make so broad a prediction -- but clearly, the Viso HP20s are world-class earphones with great sound at a reasonable price.