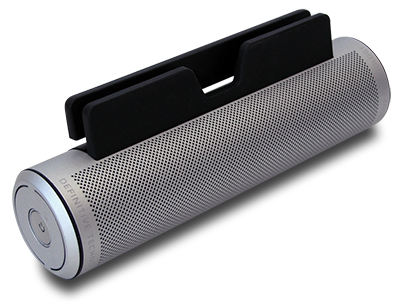 To the high-end audio industry it probably feels like forever, but this past April Apple’s iTunes turned ten years old, heralding the end of possibly the most important decade in the history of consumer electronics. No one needs to remind the folks in Cupertino that it was the lowly iPod that turned the struggling computer manufacturer into one of the most successful media companies in the world, and, in the process, completely changed the way human beings purchase and enjoy media.

Our little corner of the consumer-electronics world was a tad slow to respond to this paradigm shift, and those who failed to recognize that smartphones, iPods, and tablets were laying the foundation for personal audio and downloadable media to become the fastest-growing CE product categories of all time watched their business dry up fast. Headphones and portable audio weren’t some fad, but a sustainable business that plowed through four years of a global recession as the rest of the industry suffered.

But while the great unwashed lost little sleep as they abandoned vinyl and CDs for lossy MP3 downloads, for audiophiles, portable audio in the form of a sound dock or wireless system was the ultimate addition of insult to injury, and a poor excuse for a high-end two-channel stereo system. We stuck our noses in the air and pretended that all would be fine in the land of $10,000/pair loudspeakers and $5000 DACs. Do you know who it was fine for? The family ten blocks down, who own a little company called iHome. The garage of their summer oceanfront home could swallow our 3200-square-foot home with room to spare.

Putting aside all the gloom and doom, I jump forward to the summer of 2013, when pretty much everyone but Kim Jung-Un is making headphones or portable Bluetooth systems; high-end manufacturers are green with envy that B&O, B&W, Beats, Bose, Definitive Technology, Jawbone, Paradigm, and Sennheiser have swallowed up all of the available real estate at your local Apple store. And while there’s a lot to be enthusiastic about -- some great components from the likes of Astell&Kern, Audeze, AudioQuest, Grado, HiFiMan, and Schiit Audio are making personal audio exciting -- there’s a growing danger of there being simply too many products with too little difference between them, and only so many customers in North America who, each year, might be willing to shell out $300 for a new pair of headphones or $600 for a new sound dock.

But what about portable wireless speakers?

In that category, too, there’s been no shortage of new products, but the reality is that there hasn’t been all that much innovation to write home about. Everything looks the same, and no one has taken advantage of the fact that more and more consumers rely on a smartphone, tablet, or laptop as their primary media device. Bluetooth has matured and, thanks to codecs such as aptX, consumers can now stream lossless tracks from a smart device to Bluetooth-enabled speakers. Parents want something they can throw in a knapsack and schlep on vacation for the kids, or something they can take up to the cottage and set up on the deck with zero fuss. It needs to have a long battery life, a strong case that can take some abuse, and good sound.

Did I mention that it needs to be affordable? How about $199?

In the world of portable, wireless, Bluetooth-enabled loudspeakers, Definitive Technology’s Sound Cylinder ($199 USD each) stands alone. Not only have the folks in Baltimore come up with the best-looking, best-thought-out product in the category, it’s hard not to be impressed by its bold, detailed, extremely clean appearance.

The first thing that stands out about the Sound Cylinder (SC) is its packaging. We don’t usually pay too much attention to the boxes our toys come packaged in, but DefTech wanted the SC to stand out on a shelf surrounded by the likes of Beats by Dre, and by all accounts they’ve succeeded. The Sound Cylinder comes packaged like a bottle of scotch, which means that the folks at the Apple store can cram more of them onto a shelf -- which has apparently boosted sales. Clever. Inside the cylindrical packaging are the SC itself, a USB micro cable, a USB AC adapter, a stereo mini-to-stereo mini cable, and a microfiber carry bag. 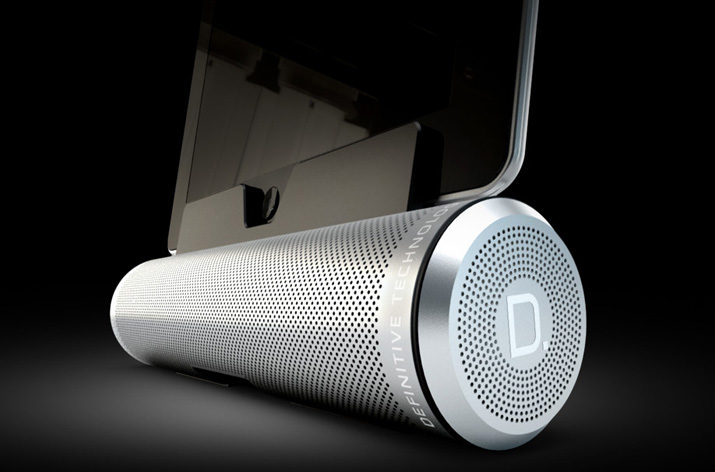 Don’t let the Sound Cylinder’s diminutive size fool you. Its sound can fill a large room with ease -- an amazing feat for a tube measuring only 7.48" long x 1.88" in diameter and barely tipping the scale at 0.75 pound.

DefTech has designed the Sound Cylinder to withstand the abuse of being tossed into a backpack or laptop bag, and its aluminum/magnesium frame seems more than up to the challenge. We took the Cylinder with us on an extended weekend to Cape Cod before the arrival of our third child, and it easily survived numerous treks to Starbucks, where it drew attention from onlookers curious about how it worked with my laptop screen and iPad 2. While DefTech includes a foldout kickstand so that the SC can rest securely on a flat surface, it’s also designed to be attached to a laptop or tablet with a robust, rubber-covered clamp that works incredibly well (aside from some problems discussed below).

DefTech has packed a lot of driver technology inside the rather narrow cylinder, including two forward-facing, 1.3”, composite full-range drivers and one 1.7” side-firing woofer. The 2.1 configuration’s quoted frequency response is 60Hz-20kHz, and DefTech claims that it’s capable of output levels of 85dB at 1 meter.

Class-D amplification is all the rage in portable devices, and all three of the SC’s drivers are powered by an 8W amp that’s more than capable of driving the speaker to levels that would make even the $600 B&W Zeppelin Air blush.

None of that technology would mean much if the processing were subpar, but that’s not the case here; the Sound Cylinder uses an Analog Devices ADAU 1701 DSP module with integrated DAC to perform all signal conversion and to apply DefTech’s Active Surround Array technology. The SC is able to process SBC and AAC codecs via Bluetooth, but via the 3.5mm input on its rear panel it can also accept a signal from your iPod, smart device, or even phono stage. 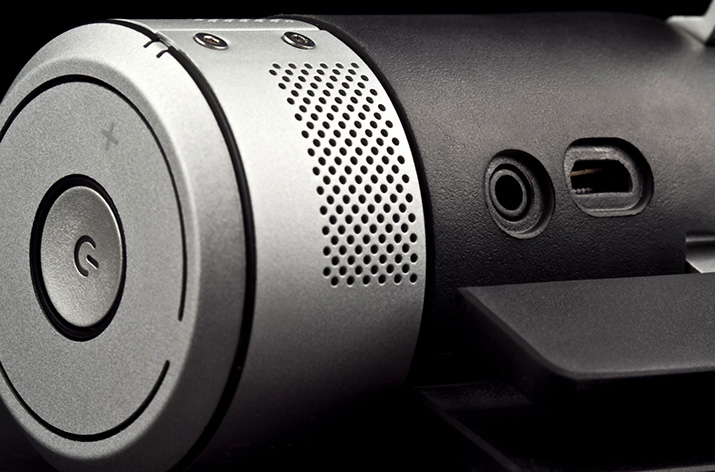 On one end of the Sound Cylinder are the power button and volume controls. On the other end is a perforated aluminum grille to protect the 1.7” side-firing woofer. The SC is powered by a lithium-ion battery that connects to a wall adapter via the supplied micro-USB cable. It requires at least two hours to achieve full charge, and while it did meet DefTech’s claim of eight hours of playing time from a full charge, that number drops quickly the louder it’s played.

The Sound Cylinder is designed to work with Android-, iOS-, Windows-, and Mac-based devices; I think any device that can connect via Bluetooth should work just fine. The only caveat with iOS devices is that you need to be sure you’re using the latest OS update.

The Sound Cylinder paired almost instantly to every device I threw at it -- something I can’t say for a number of more expensive Bluetooth-enabled speakers I’ve tried over the years. DefTech claims that the SC has a Bluetooth range of around 33’ (10m), which proved accurate as long as my playback device remained on the same floor of the house. As soon as I took my phone, tablet, or laptop upstairs or downstairs, I experienced some dropouts.

As much as I love the idea of an integrated kickstand, it angles the SC’s front-firing drivers slightly downward, which may be a problem if you plan on using it in bed with a tablet resting on your lap. I placed the Cylinder on a laptop desk (the kind with the fluffy pillow) and immediately noticed differences in the openness of the sound and its spatial presentation.

I tried the Sound Cylinder with three tablets: an iPad 2, a Google Nexus 7, and a Samsung Galaxy Note 8.0. It was easily secured to each without blocking any part of the screen. However, there’s a problem with how the clamp adheres to a laptop’s screen. As lightweight as it is, the Sound Cylinder can still put undue stress on a display (it also blocks a laptop’s camera); you should experiment with your model of laptop to make sure it’s comfortable with the setup. At worst, you’ll have to place the Sound Cylinder next to you on the desk, which shouldn’t be a big problem -- its footprint is small.

Having reviewed my fair share of Bluetooth-enabled loudspeakers over the past few years, I’ve grown to dislike the category for one simple reason: Most of them don’t sound very good. The exceptions have been the Minx Air 200 and 100, from Cambridge Audio, and the odd piece from Jawbone, but I was hard-pressed to come up with a list of ten products to recommend. In the Definitive Technology Sound Cylinder, however, consumers finally have a truly affordable, portable, Bluetooth-enabled loudspeaker that offers impressive sound for the money.

The ability to play music loudly should never be the sole reason for anyone to buy a loudspeaker, but in the case of the Sound Cylinder, it’s a major point of differentiation, if only because of its size. Not only could it fill a large room with transparent, distortion-free sound at really loud levels, it was also surprisingly dynamic.

I think it’s fair to say that Definitive Technology speakers, including the excellent SoloCinema XTR sound bar, share a similar house sound: crisp, slightly forward, with a lot of detail and excellent soundstage depth. From a tonal perspective, I find most of their products to sound slightly cool, and while there was no mistaking the Sound Cylinder as anything but a DefTech product, its tonal balance was slightly warmer than that of its siblings -- which made lossy digital tracks far easier to listen to during extended sessions.

At $199, the Sound Cylinder’s closest competitor is Cambridge Audio’s Minx Go ($150), and while I rather liked the overall Minx package for the price, the SC had better sound quality in every regard, along with that clamp and integrated kickstand.

Moving up the ladder, the Sound Cylinder faces some stiff competition from the Cambridge Minx Air 200, Peachtree Audio deepblue, and Klipsch KMC 3 wireless systems. All three may be able to play louder, offer support for Apple AirPlay and Bluetooth, and deliver a more potent bottom end, but none is as portable or as easy to use with smart devices.

Regardless of what I threw at it, Definitive Technology’s Sound Cylinder was engaging with all types of music -- everything from Green Day, Adele, Daft Punk, and Bill Frisell to Dvorák and Copland. It may not unravel layers of detail like a pair of KEF LS50s or Dynaudio Focus 340s, or even offer the bass response of a pair of entry-level monitors like the PSB Imagine Minis, but it’s pretty obvious that somebody forgot to tell it that.

Is it worth buying?

I liked it so much, I bought two. Highly recommended.