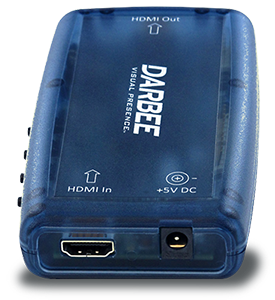 Just when you thought you had a state-of-the-art video system, along came 3D. Now we hear regular rumblings about 4K video. It’s hard to keep up, so many of us turn to black boxes to tweak our systems into something a little better than they were starting out. Of course, the best thing you can do is to have your set professionally calibrated -- or purchase one of the excellent calibration Blu-ray Discs and do it yourself.

Through having my various monitors professionally calibrated over the years, I’ve learned to back off on the sharpness control. In fact, my current Mitsubishi 65” DLP screen has the sharpness backed off completely. I’ve learned to be wary of video processors. But I’d heard such good things about DarbeeVision’s Darblet DVP 5000 ($349.99 USD) that I was finally temped to try it. After a month with it, I’ve decided that I very much appreciate what it does, yet I see how a purist videophile might find objectionable what its maker calls “an HDMI accessory that will add intense depth and clarity to any video -- enabling ultra-immersive visuals.”

For a complex device costing $349.99, the Darblet DVP 5000 seems small and cheaply made. Its case measures 3.1” x 2.5” x 0.6”, and it’s transparent -- you can see the electronics inside. Many have found this ugly, others strange; I’ll be kind and call it . . . distinctive. Of course, it doesn’t much matter how the Darblet looks, because it’s probably going to be put behind something; it can even dangle, given its small size and weight of only 3 ounces, and you’re going to control it with the remote. There’s an HDMI connection at either end, and at one end there’s also a power connection. Also included are a power cord and adapter, a wafer-thin remote control, and a quick-start guide. The full owner’s manual, available on DarbeeVision’s website, isn’t much longer than the quick-start guide.

The Darblet’s three modes are color coded: Hi Def (green), Gaming (yellow), and Full Pop (red). Any information the Darblet displays on your screen will be in one of those colors, to remind you which mode you’re in. There are buttons on the unit itself for controlling power On/Off, the percentage of processing you want (More/Less), and Menu/Back. Like something from a retro science-fiction movie, the unit has LEDs that light up to tell you what it’s doing. These are bright, and annoying in a semi-darkened room; the menu lets you dim them or turn them off.

The cheap-feeling remote has appropriately colored buttons for the three modes and a blue button for Demo, which you can set to swipe across the screen or to do a side-by-side comparison with the unprocessed signal. What I found even better for the latter purpose was to use the Darbee On/Off button, which alternates zero Darbee with whatever percentage of whatever mode you’ve chosen. Also on the remote are More/Less Darbee and Menu buttons.

The Darblet is simple to install, but you’ll need an extra HDMI cable; it’s not supplied. The Darblet should be inserted in your video signal chain just before the display. I have a switcher into which are plugged four Blu-ray and HD DVD players. I plugged the switcher’s output into the Darblet, then used the extra HDMI cord to connect the other end of the Darblet to my display. Plug in the power cord and that’s it.

When I first turned it on, the Darblet didn’t put its best foot forward. Its factory default setting of Full Pop mode at 100% caused the picture to be harsh and ugly. Since the Darblet can produce subtle results, perhaps the thinking in providing harsh default settings was to make sure that you know it’s working! DarbeeVision’s logo also appeared in the right-hand corner of the screen, like the obnoxious ones used by cable networks. You can’t get rid of theirs, but I’m happy to say that you can use the simple Darblet menu to eliminate the logo. You can also control the placement onscreen of Darbee information when you’re using the remote.

I found the Hi Def setting to be the only really good one. After trying many different percentages, I settled on 45% Hi Def as a common denominator. Actually, 55% worked for most programming, but with some, the picture looked a tad artificial and processed. With the Darblet, I feel, you can easily get too much of a good thing; the watchword is “less is more,” if you want a natural-looking picture with no artifacts. There will be those -- gamers, I imagine -- who’ll actually revel in a processed Darbee look. You might, too, when you’re first playing with it.

The Darblet works by altering and duplicating pixels. Darbee’s COO, Larry Pace, put it this way: “85% of our processing is a trade secret and the 15% that is public knowledge is simply a ‘defocus and subtract’ process, NOT by defocusing an image and subtracting it from itself, instead we use a trio of images. The original, and two outlying views of the original, which we synthesize. Our secret sauce applies the underlying process in a selective manner, so that we conditionally apply the process.”

It’s much easier to tell you that the Darblet works rather than how it works. I point the technically inclined who want to know more about the Darbee Visual Presence technology to www.darbeevision.com.

I found that the DarbeeVision technology worked best with video that has already been correctly calibrated and is sharp and clean. It didn’t work well with DVDs unless (in some cases) they’ve been upconverted before reaching the Darblet. The Darblet won’t reproduce what isn’t there. Typically, DVDs have far less background detail than a Blu-ray Disc does. Since enhancing an already high-quality video signal works best, the Darblet was most effective with BD and HD programming. Backgrounds became subtly sharper, which gave the overall picture a more three-dimensional look. Foreground details could be sharper as well. Sharper definition in hair, for instance, was quite noticeable.

The recent release with which the Darblet shone best was the BD of Les Misérables, with all those big set pieces with lots of well-defined backgrounds. These scenes are impressive without the Darblet; with it, they were breathtaking. If you have a big screen, you’ll swear you can see the expressions on distant faces. The movie also has a lot of bad and good hair, and it’s all more beautifully detailed than ever with the Darblet.

The Darblet will work with color, 3D, and black-and-white, so I tried out the new BD edition of Laura (1944), a black-and-white film and one of my favorites of all time. With the Darblet set at Hi Def 45%, Gene Tierney’s long hair had a luster and fullness that made me know what it would be like if I touched it. Nature programs, such as the recent ones from BBC, were also stunning at times, the Darblet giving the flyover scenes a magnificent depth and making the fur of various mammals tangibly realistic.

Hyperdetail in faces can be unwanted -- the Darblet seemed to emphasize facial tics. I thought it would be a set-and-forget device, but have found that it might not be. The new print Criterion used for its recent transfer of On the Waterfront (1954) is quite grainy; the Darblet processed the grain as detail and emphasized it. Even at the conservative 45% setting, faces looked a little blotchy and unattractive; that film is best watched without the extra enhancement, or with the Darblet turned down to something like 20%. But most of the time, the Darblet added subtle clarity to those parts of the picture that might need it, and didn’t alter the basic picture unless I pushed its limits.

After having the Darblet for a week or so, I had the sudden inspiration to try it with test screens, which I thought would really show it up; instead, they showed it off. There was simply no difference. Part of the Darblet’s effect seemed to be selective. Much of the time, I forgot it was there and just enjoyed the great picture I was viewing.

Although my overall impressions of DarbeeVision’s Darblet DVP 5000 are positive, I have some serious doubts as to whether it’s good value for the dollar. The 90-day warranty period seems incredibly short for a component costing $350, and though DarbeeVision indicates that there might be updates, these are not available in the comfort of your home: To be updated, the Darblet must be sent back to the factory. The details are a little hazy, but you might have to pay extra for the update.

The Darblet is also perhaps the least consumer-friendly product I have reviewed in a long time. Still, for that one Hi Def setting, the good outweighs the obvious bad to my eyes, and in the long run I found it an excellent addition to a well-calibrated video system, and one of the best video tweaks I’ve seen in four or five years. If you have a large screen and are already getting a good picture from Blu-ray or cable, the DarbeeVision Darblet, despite its many faults, is still worth your consideration for what it does well. I recommend that you take it for a spin to decide if, for you, its pros outweigh its cons.