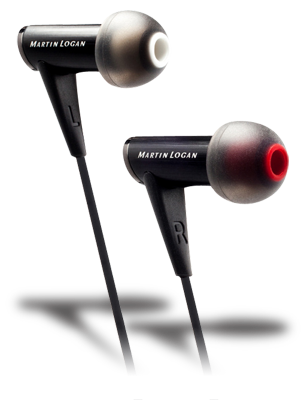 When I first heard that MartinLogan was venturing into the headphone market, I wondered whether they would come out with an electrostatic design. After all, electrostatic speakers are the products for which this Kansas-based company has been known throughout its 30-year history. For better or worse, the new Mikros 70 in-ear earphones ($149 USD) employ 6.6mm dynamic drivers, but they’ve been developed by MartinLogan to deliver a sound that, according to the promotional literature, was "inspired by the sonic clarity and detail of our legendary electrostatic speakers."

The Mikros 70s’ housings are each formed from a single piece of black-anodized aluminum with a shiny end. Small and subtle enough not to draw a lot of attention, up close they have a quality look and feel. The 4’/1.2m, nondetachable cable has a microphone and remote for use with iDevices and other smartphones, and is terminated with a gold-plated, four-conductor, 3.5mm, right-angled plug. The cable was soft and flexible but lacks any sort of shirt clip, and I found it mildly microphonic -- often a problem with in-ear models. The box includes a small carrying pouch and a selection of eartips. There are two sizes of triple-flange tips and three sizes of single-flange -- all of them in soft, floppy silicone. The triple-flange tips offer better isolation, but require insertion deeper in the ear canal than the single-flange tips.

MartinLogan claims 33dB of isolation; I would have guessed somewhat less. The Mikros 70s were better at attenuating outside noise than Bowers and Wilkins’ C5s, but fell short of the various models from Etymotic Research. (Due to differently sized throats, I couldn’t try the Etymotic tips on the Mikros 70s.) The only other relevant technical information is a 22-ohm nominal impedance and a 98dB/mW sensitivity -- you should be able to get plenty of volume from all but the most anemic portable players.

The Mikros 70s are balanced a little on the warm side of neutral, with a slight boost in the upper bass/lower midrange and a moderate shelving-down of the highest frequencies. That meant an enjoyable listening experience with everything from classical and audiophile recordings to Adele’s overly hot, ruthlessly compressed 21 (16/44 FLAC, XL Records). The upper harmonics of acoustic instruments such as violins and trumpets were somewhat subdued, and the Mikros 70s lacked the last bit of air and sparkle with the best recordings, but that seems to be the balance most engineers seek when designing for portable use. I certainly prefer it to being told everything that’s wrong with my portable player or, possibly, compressed recordings.

A warm tilt is seldom a bad thing with vocal recordings, particularly when the voices are those of women. Alison Krauss, Eva Cassidy, and Anne Sofie von Otter all sounded sweet and inviting. Male voices were full but took on no undue chestiness. Sibilance was tamed on good recordings and bad, but not so much as to affect the intelligibility of words. The electronic haze that surrounds Johnny Cash’s voice in All Aboard the Blue Train (24/96 FLAC, Sun/HDtracks) was also suppressed. While that’s not strict accuracy, many listeners may find such editorializing all to the good. 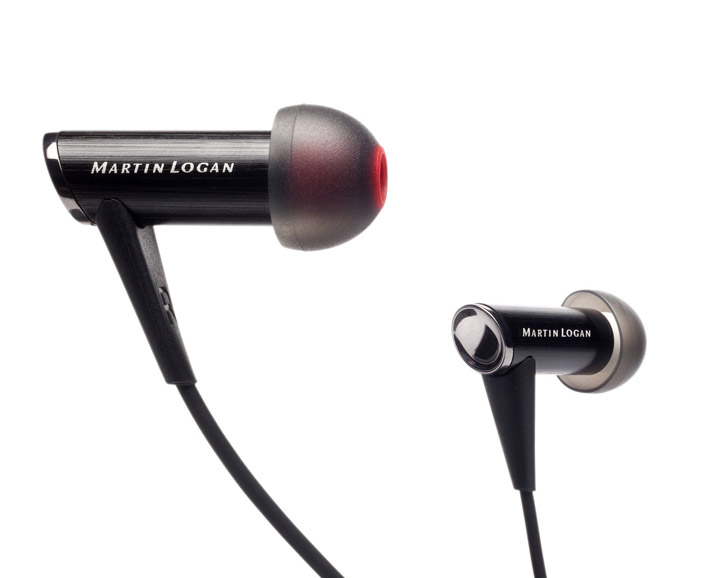 On the other hand, earphone designers have wildly different ideas of how much bass is appropriate. Truly low bass was absent with the Mikros 70s, but there was sufficient midbass energy that they never sounded thin. Full orchestral repertoire, such as Valery Gergiev and the London Symphony Orchestra’s recording of Debussy’s La Mer (24/48 FLAC, LSO Live/Society of Sound), had a good sense of grandeur. The bass drums and timpani lacked the weight and impact you get from full-size headphones, but they were clearly audible. Acoustic and electric basses -- as on, respectively, the Oscar Peterson Trio’s Night Train (24/96 FLAC, Verve/HDtracks) and Eva Cassidy’s Live at Blues Alley (CD, Blix Street G2-10046) -- held their own in the mix. I also noticed the low end filling in better at higher volumes -- though what I consider "higher volumes" would be quite tame to many others.

In keeping with the Mikros 70s’ overall warm character, the bass tended toward the broad and slightly soft rather than the tight and punchy. That was true whether I drove them with my fifth-generation Apple iPod or my reference Grace Design m902 headphone amplifier -- though the sound in this regard was, unsurprisingly, better with the Grace. Still, the bass was sufficiently articulate to provide momentum to upbeat numbers like "Next to You," from the Police’s Outlandos d’Amour (LP, A&M/Vivante VPLP 003). 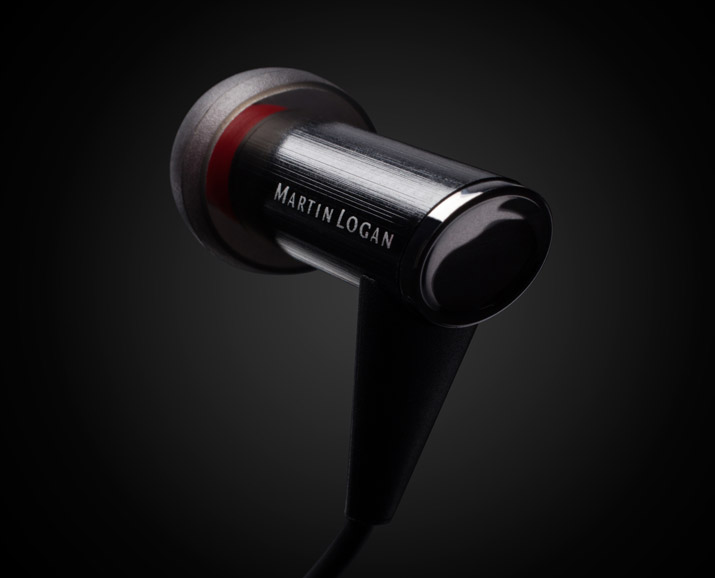 The Mikros 70s did a superlative job of reproducing recordings of solo instruments. Listening to Par.ti.ta, a disc of works for unaccompanied violin by J.S. Bach, Ysaÿe, and Auerbach (24/96 FLAC, BIS/eClassical), I heard every inflection of Vadim Gluzman’s bowing, as well as the reverberant field around his instrument. Pizzicato notes were very slightly rounded but very clean, with a natural decay. I was similarly impressed with the attention the MartinLogans paid to the nuances of Hélène Grimaud’s piano playing on Resonances (24/96 FLAC, Deutsche Grammophon/HDtracks), and I have nothing but praise for their reproduction of Eva Cassidy’s guitar and voice on Simply Eva (Blix Street G2-10099). The interplay between musicians on Sonny Rollins’s Road Shows Vol.2 (CD, Doxy 277497 2) was also conveyed with aplomb. But when things got more complex -- as in densely scored orchestral passages, or even "Choctaw Hayride," from Alison Krauss & Union Station’s Live (CD, Rounder 11661-0515-2) -- the Mikros 70s couldn’t tease out individual instrumental lines, instead presenting the music as a whole. Regardless, it didn’t keep me from listening to or enjoying these types of music.

In-ear ’phones can never present the size or spaciousness of large, circumaural designs, but not all in-ear phones are created equal. Given the right recording, the Mikros 70s could laterally place sound sources seemingly outside of my head. On the live Alison Krauss album, a member of the audience shouts, "I love you, Alison!" His voice came from way off to my right. With naturally miked orchestral recordings, the Mikros 70s placed the brass and percussion behind the strings and woodwinds, but the image on the whole was rather squashed in the depth dimension. Considering that most portable players aren’t capable of rendering a soundstage even when one has been properly recorded, this is a very minor criticism.

There’s a lot of competition for in-ear ’phones around the Mikros 70s’ price. Two models that I’ve reviewed for SoundStage! Xperience are the B&W C5s ($179) and the Etymotic Research hf5s ($149; or $179 for the hf3, which includes microphone and remote). The MartinLogan and Etymotic ’phones, like most other in-ear designs, rely on friction between the eartip and the ear canal to keep the transducers in place. The B&Ws have an innovative loop that nestles into the convolutions of the outer ear -- that will make the B&Ws more comfortable for many people, though others find the wire loop painful. In terms of attenuating ambient noise, the Etymotics are the best, followed by the MartinLogans, then the B&Ws. Ranking these ’phones in terms of spaciousness, the hf5s produce the smallest aural image, the Mikros 70s were a noticeable step forward, and the C5s remain far ahead of any other in-ear I’ve heard.

But descriptions of sound quality are less about rankings than about trade-offs. The C5s have quite a bit more bass than strict accuracy requires, and can get rather sloppy when driven by a device with a high output impedance -- but many people like such a full bottom end. I’ve described the Mikros 70s’ bass above: a little lighter than neutrality, but generally quite satisfying. The hf5s are definitely bass shy, but what bass there is is very articulate. Bass aside, the hf5s have the most neutral tonal balance, though it’s skewed slightly toward a present midrange. The sounds of the C5s and Mikros 70s were both on the warm side, but the Mikros 70s had a little more high-frequency extension, and the strong bass and midbass of the C5s sometimes spills over to muddy the lower midrange. The Etymotics deliver the most detail, with the MartinLogans edging out the B&Ws for second place. Which model a listener will choose among these excellent contenders is entirely up to priorities and taste.

The staggering number of in-ear ’phones to choose from sets the bar pretty high for any new model; a product with any serious shortcomings is easily dismissed out of hand. MartinLogan has entered this very crowded arena with a design that’s attractive and seems well made. Its sonic signature is a bit warm, but not drastically so, with bass that’s present but not overwhelming. The Mikros 70s’ detail and clarity are excellent with small- to medium-scale music. Though they won’t substitute for studio headphones for more complex fare, they won’t discourage you from listening to such recordings.

By including the word reference in their marketing material, you might assume that MartinLogan is aiming for a no-nonsense analytical device. Instead, the Mikros 70 delivers a sonic balance that strives to please, regardless of musical selection or driving equipment. Tastes varying as they do, there’s no guarantee that you’ll like the flavor of sound offered by the Mikros 70s -- but I sure did.