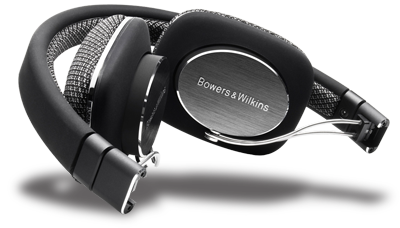 When Google released their Correlate tool, one of the first terms I tried searching was "audiophile." At that time, the No.1 correlated search term was "B&W." The British firm has been designing and manufacturing loudspeakers since the 1960s, and you’ll find their products in many of the world’s top recording studios as well as in audiophiles’ listening rooms. In 2010, B&W broke into the vibrant headphone market with the P5 on-ear model, and followed up with the C5 in-ear headphones, which I reviewed in October 2011. The latest addition to their mobile lineup is the P3 ($199) -- a lightweight on-ear design with microphone and control for iDevices.

B&W’s industrial design team has, once again, done a bang-up job. The earcups are of rubber and brushed aluminum, backed with a black, oval "Bowers & Wilkins" vertically oriented nameplate. A stiff double wire comes down from each side of the rubber headband and swoops backward. Not only does that keep the mounting out of the way of the logo and add some visual flair, it tilts the driver assemblies slightly forward so that their angle relative to the head is better aligned with the typical listener’s ears. A single-point fastening also allows the earcups to pivot up and down for best fit. Hinges allow them to be folded up and into the headband for storage in a large pocket or a plastic clamshell case (included). The P3s look great and feel sturdy, yet still weigh only 128gm.

The feature I found most clever was the method for attaching the interchangeable connecting cables -- one with microphone and remote, the other without. The wire splits to run to both sides. (Not everyone likes split cables, but it keeps the headband assembly looking clean and doesn’t risk pinching or catching a little wire when the headphones are folded.) Rather than just plugging into the bottom, where they might get yanked out, each wire goes up and into the earcup and connects with a 2.5mm jack. The clever part is that the routing of the wire acts as a strain relief on the connector. You access the connections by removing the earpads, which -- like many speaker grilles -- are magnetically attached.

Attention has also been paid to the parts that affect the sound. Those earpads are made of memory foam covered by a fabric that B&W says was chosen first for its acoustic properties, and only then for comfort and appearance. The P3 driver is a new design, not a carryover from the P5. As with many high-end loudspeaker drivers, the diaphragm uses constrained-layer damping to reduce unwanted resonances. The voice-coil is copper-clad aluminum, and its connecting wires exit behind the magnet so that they don’t disrupt airflow around the moving diaphragm.

One benefit B&W claims for their memory-foam earpads is that they’ll adjust to the shape of your ears for enhanced sound quality and isolation -- consider them self-customizing. After the first few minutes of wear, I began to notice increases in volume and focus and an improvement in bass response. I had the general impression that the sound got better the longer I listened, but the unambiguous changes lasted for only the first 10 or 15 minutes. There was a similar adjustment period the next time I donned the P3s. Over a few weeks of use, this settling-in happened more quickly, though the P3s always needed at least a few minutes to give their best. Isolation also improved as the pads conformed to my ears. The reduction in ambient noise was noticeably better than with most small on-ear models, but if you need serious noise attenuation, you’ll have to look to in-ear monitors or bigger, closed-back, circumaural designs.

The P3s’ bass response was surprisingly robust for such small headphones. As with many minimonitor speakers -- a product category in which B&W’s engineers have much experience -- a strong midbass makes up for a lack of low-bass output. The P3s delivered plenty of volume down to about 60Hz, then rolled off quickly. Big orchestral bass drums and pipe organs require those lower frequencies to develop a full sense of scale, but most other instruments do not. Left-hand piano parts sounded rich, and double basses -- which underpin the sound of most jazz ensembles -- had a good sense of body. The P3s even did a credible job of reproducing Øystein Baadsvik’s tuba in his recording of Kalevi Aho’s Tuba Concerto, with Mats Rondin and the Norrköping Symphony Orchestra (CD, BIS 1574), endowing it with not only the appropriate weight but nice tone. Baadsvik here plays the smaller E-flat tuba, not the C- or B-flat instrument usually found at the back of a band or orchestra, but the E-flat still goes lower than most small headphones can manage.

Good bass isn’t only about quantity; it also requires articulation. The bass line in "Don’t Wait Too Long," from Madeleine Peyroux’s Careless Love (CD, Rounder T1661-3192-2), thumped along with good separation between notes. The P3s’ leading-edge definition also gave forward momentum to the funky bass groove in the instrumental interlude in "Echoes," from David Gilmour’s Live in Gdansk (CD, Columbia 88697 34547 2). The electric bass and kick drum provide most of the drive in rock, and the P3s kept the energy level high in the upbeat numbers from Irish band Bell X1’s Flock (CD, Island/Universal CID 8161/987434-8). 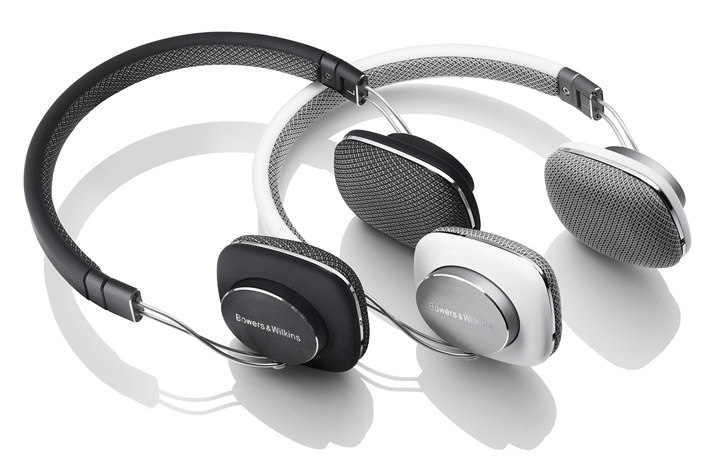 The P3s’ bass wasn’t perfect, though. While the front of each bass note was firm, there was enough overhang to muddle dense bass parts. The problem was most apparent in orchestral recordings -- a bowed double bass lacks the percussive attack that differentiates individual plucked bass notes in jazz and rock. That fact, combined with the longer reverberation of notes in the venues where classical music tends to be recorded, often made it hard to decipher exactly what was going on in the lower strings. Pianos are percussion instruments, but fast passages in the left hand still tended to blend together. In the Allegro of Franck’s Sonata for Violin and Piano, from Itzhak Perlman and Martha Argerich’s performance at the Saratoga Music Festival (CD, EMI Classics 5 56815 2), the result was the violin and right-hand piano parts floating above a turbulent sea of midbass energy. On the other hand, it was, in large part, this extra bloom that made the P3s sound so much bigger than they are. Many listeners will happily trade a bit of definition to get that sense of overall grandeur.

Of course, bass isn’t the only aspect of headphone performance. The P3s’ midrange was clear, present, and a bit on the warm side. Those attributes were a great complement to women’s voices, such as Alison Krauss’s or Eva Cassidy’s, lending them a glow, a saturation, a palpability that was very inviting. The elevated mid- and upper bass added an extra bit of resonance to deep baritones, such as Fredrik Zetterström’s, on Anne Sofie von Otter and Bengt Forsberg’s A Summer’s Day: Swedish Romantic Songs (24/88 FLAC, BIS/eClassical), with less loss of clarity than often accompanies the extra heft. The P3s brought voices forward out of the mix, but not so much as to detach them from the rest of the musical tapestry. Lyrics were always perfectly intelligible, but sibilance was never unduly emphasized.

Electric guitars cover roughly the same frequency spectrum as the human voice. With "Echoes," the P3s contrasted the various tones Gilmour coaxes from his Stratocaster. The first part of his solo was dark and creamy, the second brighter and more assertive. In the fanfare-ish section, after the funky interlude, the notes had the brassy quality characteristic of using the bridge pickup.

The P3s’ high frequencies were noticeably shelved down. This came as a relief with overly hot mainstream pop releases, such as Adele’s 21 (320kbps MP3, XL Records), which I find nearly unlistenable through many other headphones. With properly balanced recordings, the P3s toned down the upper harmonics of acoustic instruments. Perlman’s violin, on the Saratoga disc, was a little darker and woodier than I’m accustomed to hearing it, but it still sounded like a violin, not a viola. In the Wynton Marsalis Quintet’s From Billie Holiday to Edith Piaf: Live in Marciac, with accordionist Richard Galliano (CD, Rampart Street WME19457-2), trumpet, saxophone, and accordion were all a little denser than strict neutrality. Even so, the P3s clearly demonstrated the different timbres of the tenor and soprano saxophones Walter Blanding played in that concert, and preserved the contrasts in tonal colors -- from mellow to a little bit brassy -- that trumpeter Marsalis uses to deliver his musical message.

When I reviewed B&W’s C5 earphones, what most impressed me was the convincing illusion of space they created -- something I hadn’t heard from any other in-ear design. The soundstaging abilities of the P3s weren’t as radically different from other on-ears as the C5s were from their competition, but they did sound a bit more spacious than similar designs I’ve tried over the years. Most studio albums were happening entirely inside my head, but with bigger images of instruments and voices than is the norm. With live recordings, such as the Gilmour and Marsalis concerts, the audience’s applause spread beyond my ears to left and right. While the P3s couldn’t project images out in front of me, they did hint at the greater depth in the full orchestral recording of Gershwin’s Piano Concerto in F, as opposed to the closer-in sound of the small jazz orchestra used for Rhapsody in Blue, in the recordings by pianist Freddy Kempf with Andrew Litton leading the Bergen Philharmonic (24/96 FLAC, BIS/eClassical).

With the P3, Bowers & Wilkins has a headphone that is compact, lightweight, comfortable, and, from what I could tell through the review period, durable. The P3s’ look is suave and sophisticated, not flashy or gaudy. They don’t offer the ruler-flat response or abundant detail of studio cans, but expecting them to do so would be missing the point. Their slightly exaggerated bass adds to the sense of scale and energy while only rarely obscuring the goings-on. The vast majority of music, regardless of genre, is vocal-centric, and the P3s bring those voices forward out of the mix while keeping their sound wholly organic. Their high frequencies are sufficiently down in level not to set teeth on edge with dodgy recordings or the often brittle outputs of portable players, but they don’t go so far as to rob music of its life and vibrancy. If you come to the P3s from a pair of earbuds or the average small headphones, you’ll likely be amazed at how much bigger and more open they sound. And when you turn up the volume, they won’t complain -- they’ll just get more enveloping. Bowers & Wilkins’ P3 headphones offer a very satisfying sound wrapped up in a stylish, go-anywhere package.