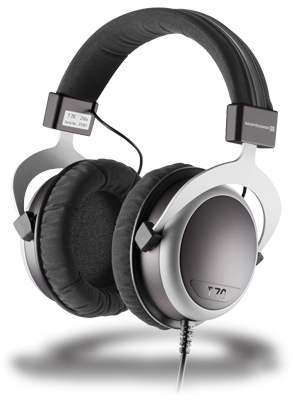 In 2009, Beyerdynamic introduced their flagship Tesla T 1 headphones. The use in the model name of tesla, the International System of Units (SI) unit of measurement for the strength of a magnetic field, refers to the fact that the driver's annular magnet achieved the unprecedented flux density of 1.2 tesla in the voice-coil gap. The higher efficiency of so strong a magnetic field allowed the designers to use a smaller, lighter voice coil than would normally be required to generate the same driving force, resulting in better dynamics and faster transients. In 2010, Beyerdynamic used a miniature version of the Tesla driver in their T 50 p portable headphones. In late 2011, they added to the Tesla line the subject of this review: the T 70 headphones ($595 USD).

The German-made Tesla T 70s are a full-size, closed-back, circumaural design. The earcups measure about 4" in diameter. Most of their surface area is painted a subtly textured black/gray, bordered in a much lighter matte gray. There's no accounting for fashion tastes, but I found the look classy and modern. Each earcup hangs on an aluminum-alloy yoke that moves into and out of the headband to adjust for head size. The earpads and the underside of the headband are covered in a soft microvelour, which breathes well. Between their large earcups, soft padding, and light clamping pressure, I found the T 70s extremely comfortable for use all day long. The single-sided, nondetachable cord is 10' long and terminated with a gold-plated 1/8" stereo plug. A screw-on 1/4" adapter is included, along with a very nice carrying case of padded leatherette.

The T 70s are available in two versions. I was sent the 250-ohm model, which is appropriate for use with headphone amplifiers and home hi-fi equipment. The 32-ohm model, the T 70 p, is tailored for portable devices that can't deliver large voltage swings. Both models have a rated sensitivity of 104dB at 1mW, but the difference in impedance means that the T 70 p will play much louder at a given volume setting. Power handling is up to 200mW, which works out to a maximum SPL of 127dB. You'll be running the risk of permanent hearing damage long before you start stressing the headphone drivers.

Closed-back headphones typically have robust bass that's a little boomy and interferes with the lower end of the vocal range. The T 70s weren't like that at all -- their bass was actually a bit on the light side. I heard extension all the way into the bottom octave, but the intensity rolled off gradually below 100Hz. They also eschewed the midbass hump designed into some headphones and speakers to give the impression of abundant bass. The result was a low end that was clean, clear, and articulate, but not especially weighty. Driving the T 70s with the high output impedance (80 ohms) of the Trends Audio PA 10.1D GE headphone amplifier did increase the midbass, at the expense of some control.

The T 70s revealed all the intricacies of Charles Mingus's fingerwork in his solo in "Mood Indigo," from Mingus Mingus Mingus Mingus Mingus (SACD/CD, Impulse!/Analogue Productions CIPJ 54 SA), never letting notes blur together, though the body of his double bass was somewhat reduced. The bass line in the title track of Shelby Lynn's Just a Little Lovin' (CD, Lost Highway B0009789-02) purred along in the background, but I'm used to hearing it more prominent in the mix. Moving even lower in frequency, the bass drum that opens José Luis Ocejo's famous recording of Ariel Ramirez's Misa Criolla, with tenor José Carreras (CD, Philips 420 955-2), sounded big, but it didn't feel as big as it can through headphones with a more robust low end. In short, the T 70s always kept me aware of what was going on in the nether regions, but didn't deliver the head-rattling bass experience some listeners crave.

Though the T 70s didn't reproduce the full measure of low bass, they still delivered good punch. They gave a very firm edge to the kick drum in "The Happiest Days of Our Lives," from Pink Floyd's The Wall (CD, EMI 724388124329), and to the large bass drum on which are played the "hammer blows" in the recording of Mahler's Symphony No.6 by Michael Tilson Thomas and the San Francisco Symphony (SACD/CD, SFS 821936-0001-2). The latter were as startling as Mahler intended them to be, and spoke more generally of the T 70s' dynamic prowess. Good dynamic range isn't just a matter of being able to play at high volume; it requires the component to demonstrate a stark contrast between soft and loud. When I listened to Yefim Bronfman's recording of Prokofiev's Piano Concerto No.2, with Alan Gilbert conducting the New York Philharmonic (24/96 FLAC, NYPO/HDtracks), the transition in the fourth movement from the brief solo-piano interlude to the fiery conclusion made me literally jump.

What made these contrasts so convincing was not the T 70s' ability to play cleanly at high levels -- though they could -- but the amount of information they conveyed at low levels. In effect, quiet didn't sound quiet, because I could hear everything that was going on. In that Prokofiev recording, every chair creak, page turn, and cough -- whether in the audience or in the orchestra -- was as clear as if I were standing next to Maestro Gilbert. That degree of resolution made it easy to pick out individual lines in full orchestral scores -- or to unravel the multilayered studio mixes of Sarah McLachlan's Fumbling Towards Ecstasy (CD, Arista 18725-2). No doubt some of what made these details so apparent was the closed-back design. The T 70s offer only moderate isolation, but any reduction in ambient noise will increase the audibility of such details. Of course, you won't hear those details if the headphones can't reproduce them, but the T 70s could. Credit for that must go to the highly efficient Tesla drivers.

I was also impressed by the T 70s' rendering of spatial information. In Misa Criolla, Carreras's tenor was front and center, the choir spread out far to the sides and behind him. What's more, the T 70s did an incredible job of reproducing the acoustic of the church in the way the choir's voices -- and that big bass drum -- reverberated off the walls and slowly died away. By contrast, every track of Eva Cassidy's Simply Eva (CD, Blix Street G2-10099) was recorded in a studio. From song to song, the T 70s highlighted the differences in setup and the amount of artificial reverb used. Unlike some other designs, they didn't add space when none was there. In Miles Davis's Someday My Prince Will Come (SACD/CD, Columbia/Analogue Productions CAPJ 8456 SA), the piano was at my left ear, and the bass and trumpet were in the center of my skull, with not much space around any of them -- the results of close miking. The drums hung out around my right ear, but the somewhat more distant placement of the microphone that captured them retained a little of the studio's ambience.

Returning to frequency response, the midbass and midrange were commendably even, but a mid-treble peak showed up with certain material. The Royal Concertgebouw Orchestra's recording of Mahler's Symphony No.4 under Bernard Haitink (SACD/CD, RCO Live 07003) has proven a neutral performer through many fine headphones and speakers, and its variety of instrumental timbres makes it an excellent test. The clarinets were smooth and mellow, the oboes and bassoons displayed the proper balance of wood and reed, and the violin solos were well balanced -- but the violin section as a whole was a little too astringent in the higher pitches. The brass section also had a bit too much brilliance in louder passages. Soprano Christine Schäfer's solo in the fourth movement was as pure and sweet as I could wish, but the same frequency bump that enhanced Camilla Tilling's diction in Bei dir allein!, a collection of Schubert songs (24/88 FLAC, BIS/eclassical), slightly increased sibilance. Paul Rivinius's piano in this recording also sometimes sounded a little harder than it should. I found these excesses less pronounced when driving the T 70s with the slightly warm Grace Design m902 headphone amp than with the more clinical headphone outputs of the Resonessence Labs Invicta, and some tubed headphone amplifiers may further mitigate them.

Results with studio recordings were mixed. Many microphones have a lift in the mid-treble to add sparkle and air, and the effect is maximized when such mikes are placed close to a sound source. Combining that lift in the mike with the peak in the headphones' frequency response made Eva Cassidy's voice a bit too bright -- ditto for Johnny Cash's voice in All Aboard the Blue Train (24/96 FLAC, Sun/HDtracks). Shelby Lynn's voice is also close miked, but it sounded entirely natural, as did Madeleine Peyroux's in her Careless Love (CD, Rounder T1661-3192-2). Where I ran into the most trouble was with albums such as Adele's 21 (320kbps, XL Records). Here, as in many mainstream pop releases, the highs have been boosted to give the music some life when it's played through cheap earbuds or a typical car stereo. This album -- especially its most popular track, "Rolling in the Deep" -- sounds too hot through any honest system, but the T 70s made Adele's voice even more searing than usual, and exacerbated the hashy quality of the cymbals. The Beyerdynamic T 70s are incompatible with such recordings.

I had originally thought to compare the Tesla T 70s with the Ultrasone Pro 900s, which I reviewed last year. Both are closed-back designs made in Germany and have a similar MSRP. The problem is that they don't sound anything alike. The Pro 900s have traditional closed-back virtues -- very good isolation and huge bass output -- as well as the usual vice: their big bass and sparkling treble make the midrange sound recessed. For most listeners, that last sentence will be enough to sway a decision one way or the other.

Of the headphones that have made their way through my listening room over the past year or so, the T 70s are most similar to the AKG K701s ($449). Both have neutral midranges, and bass that's more informative than fun. Both have transients that are a little hard, but the T 70s definitely sounded harder. The T 70s also had that occasional mid-treble peak. They pulled ahead of the K701s in dynamics, retrieval of low-level detail, focus, and completeness of aural environment. For some, those advantages, and the Beyerdynamics' good isolation, may be worth giving up the AKGs' more even frequency response and openness.

No set of headphones will satisfy every listener, but I think the Beyerdynamic Tesla T 70s will prove more divisive than most. If a lot of the music you like has been brutally EQ'd, the T 70s won't treat it kindly. If, on the other hand, you primarily listen to classical music, audiophile recordings, or any other recordings whose engineers have aimed for a neutral to warm tonal balance -- you'll suffer only the occasional dash of brightness. In exchange, the Tesla T 70s will reward you with an expansive soundstage and excellent dynamics. Their greatest strengths are levels of focus, clarity, and detail that are rare among dynamic headphones. Their closed-back design only augments that sense of detail, and seems to have no adverse consequences. If you strive to hear everything that's on your recordings, the Beyerdynamic T 70s should definitely be on your audition list.