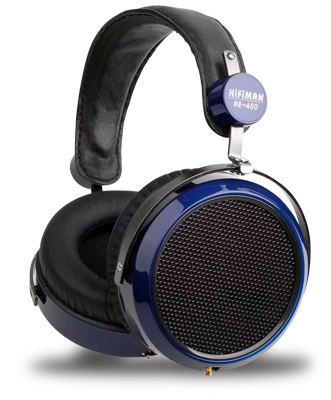 When Chinese company HiFiMAN developed their HE-6 headphones ($1299 USD), they used a planar-magnetic driver. This driver’s very low efficiency specification of 83.5dB meant that the HE-6 required an amplifier with a 2W output. If you try to get 2W out of most headphone amps, you’re likely to see puffs of smoke coming out of the amp. And if you try to power most headphones with a 2W amplifier, you may well see puffs of smoke coming from the ’phones. So when HiFiMAN set about designing their next headphone models, they had three goals: 1) keep the planar-magnetic drivers, 2) make them cheaper, and 3) make them more efficient.

The HE-400s achieve those goals. Their efficiency is 92.5dB, and the cost is a much more affordable $399. You can play the HE-400s directly from an iPod (I’ve tried it), though I’d want more power to achieve satisfactory volume levels -- and I’m no headbanger. More important, you can use HiFiMAN’s Express HM-601 portable player ($249) to drive the HE-400s to reasonable levels.

Comfort is very important to headphone users -- it not only affects how long you can stand to wear a pair of ’phones, but one person’s comfort is another’s discomfort. Although I have a fat head (hat size 7 5/8), the HE-400s were a good fit at their minimum adjustment setting. They seemed to clamp onto my head a bit snugly, and their weight was definitely noticeable to someone, like me, who normally uses AKGs. Still, the HE-400s didn’t become uncomfortable over multi-hour listening sessions. Possibly that’s because, even in long sessions, I occasionally remove my ’phones to answer the phone, replenish my adult beverage, adjust my glasses, etc.

The dark blue HE-400s’ black leather pads didn’t seem to make my ears sweat, although I didn’t do my listening in the summer. Although we don’t subject our test components to any kind of destructive stress test, the HiFiMANs’ construction seemed quite rugged. During the review, one of the cables came off, but that was because of my feeble hand-tightened connection; it was easily reattached. The HE-400s’ 10’ (3m) Canare cable is unusually stiff for a headphone cable, but I heard no noise from the cable through the headphones. The cable is terminated in a mini-plug; an adapter for a full-size plug is included.

The HE-400s are an open-back design; there’s little isolation from room noise, and vice versa -- the HE-400s let bystanders know what you’re listening to.

The Benchmark DAC1 PRE is a combination DAC, line stage, and headphone amp in a single small case. It easily drove the HiFiMAN HE-400s; my volume settings ranged between 11 a.m. and 1 p.m. The Benchmark has a neutral sound and a low output impedance; it can drive most headphones, even those with low impedances, such as the HE-400’s 35 ohms. And I was able to use the Benchmark’s internal DAC with my laptop computer, which acts as one of my servers. During break-in of the HE-400s, I used my iPod Touch docked in a Wadia 170iTransport, which sent the digital signal from the iPod to the Benchmark via an S/PDIF cable. This gave me a system with no moving parts, and thus, hopefully, nothing to wear out. The iPod contains nothing but WAV music files, so there should be no loss of quality from this simplest of servers, although the iPod won’t handle hi-rez files. I used my laptop computer-based server, connected by an AudioQuest Coffee USB cable to the DAC.

The HE-400s benefited from about 200 hours of break-in, after which the high frequencies were more extended, and the overall sound was more lively.

Planar-magnetic headphones have a reputation for reproducing sterling bass, and the HE-400s were no exception. Bass not only had deep extension, it had lots of weight. In organist Virgil Fox’s performance of J.S. Bach’s Prelude in D, ripped from Reference Recordings’ 30th Anniversary Sampler (16/44.1 FLAC), the pipe organ’s bass thundered lustily, with about as much weight and depth as I’ve heard from headphones. No, it didn’t provide the full-body impact a subwoofer or even a full-range loudspeaker will, but no headphone can. (I know of one person who plays his subwoofer while listening to headphones so that he can feel, as well as hear, the bass.)

High frequencies didn’t exactly sparkle, but neither were they missing in action. In Eiji Oue and the Minnesota Orchestra’s performance of Argento’s For the Angel, Israfel, from the Reference sampler, the very high chimes that open and close the piece were quite audible. I’ve heard more extended renderings, but the HE-400s exceeded my expectations. The rest of the piece was also quite well done. It was very dynamic, and the HE-400s handled with aplomb the orchestral explosions, which have a strong bass component.

Folia Rodrigo Martinez, from a rip of Jordi Savall and Hespèrion XXI’s La Folia 1490-1701 (16/44.1 FLAC, Alia Vox), also exhibited deep bass response. On this recording a drum is used whose sound extends way down to the mid-20Hz area -- the HE-400s captured not only the deepest notes, but also their reverberant field in the studio. Impressive! But the HE-400s showed they could reproduce more than just the bass; they also re-created the sounds of the many percussion instruments used by Hespèrion XXI. In particular, the leading-edge transients of the wood blocks were extremely well defined, with a definite snap. Other instruments were fully fleshed out, and the overall frequency response seemed smooth, without the peaks and valleys often found in headphones. While the highs weren’t the most extended I’ve heard, only the highest overtones were missing. 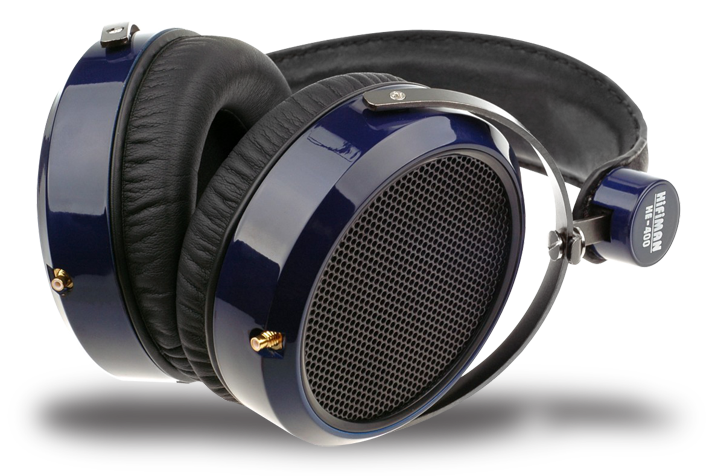 Satisfied with the HE-400s’ ability to handle orchestral material ranging from barely audible to full cry, I wanted to hear how they reproduced voices. I cued up "God Moves on the Water," ripped from Chris Jones’s Roadhouses and Automobiles (16/44.1 FLAC, Stockfisch). By now you probably won’t be surprised to hear that the opening bass was positively subterranean, but Jones’s gravelly vocals were also well reproduced, along with the other instruments. This track has plenty of dynamic impact, and the HE-400s’ way with transients captured it accurately. Another song on this album that I thoroughly enjoy is "The Last Fallen Leaf," a guitar solo written and played by Jones. The guitar was realistically reproduced, from the deepest thwacks of its body to the highest overtones, and Jones’s plucks of the strings were quite well defined.

I used a rip of A Sei Voci’s performance of Allegri’s Miserere (16/44.1 FLAC, Astrée CD), to hear how the HE-400s would handle a mixed chorus. I always miss the plentiful spatial cues when I switch from speakers to headphones, but although the HE-400s didn’t throw a real soundstage, there was plenty of hall sound to suggest the medium-large recording venue. The soprano’s voice soared radiantly as she improvised the sort of ornaments that would have been heard during the Baroque era. The rest of the chorus was clearly defined, and while their voices blended together, as in any good chorus, I could also hear individual voices.

AKG’s K701s have long been my favorite headphones. Although they lack the lowest bass extension of some other ’phones, I’ve never felt they missed much in the bass -- so long as they’re driven by a robust amplifier. And the midrange and highs are, to my ear, just about right. With a 62-ohm input impedance and 105dB sensitivity, the K701s work well with most headphone amps, including the Benchmark DAC1 PRE. And I love their comfort: much lighter than the HE-400s, and with lower spring pressure, the AKGs are easy to wear for long periods, and their velour earpads don’t make my ears sweat. Not much, anyhow.

When I played Virgil Fox’s Bach recording, the bass descended deeply, but without the extension and weight of the HiFiMAN HE-400s. I’d always thought the AKGs’ bass was just fine, but now I could hear what I’d been missing. Similarly, Chris Jones’s bass was completely adequate, but the high frequencies of other instruments were a bit more extended through the AKGs, and I fancied I could hear a smidgen more detail. On the other hand, in "The Last Fallen Leaf," the tonal density was higher, and the guitar sounded more realistic than through the HE-400s.

With Argento’s For the Angel, Israfel, the high frequencies of the chimes were definitely more extended, with a little sparkle missing from the HE-400s -- but only a little. Allegri’s Miserere sounded more open and radiant through the AKGs, perhaps even a bit bright. The difference here wasn’t huge -- both headphones sounded excellent; which was better was a matter of personal preference.

So after an interesting competition, the AKG K701s remain my favorite headphones -- but I’m now more conscious of how they could be improved. I hoped the HE-400s would displace the AKGs, but I fear that would take a more expensive HiFiMAN headphone; e.g., the HE-6. Of course, that would also require a more powerful amplifier.

I’ve discussed the HiFiMAN HE-400s’ performance in audiophilespeak. Now let me try to put it all in perspective.

The HE-400s have a robust, weighty sound that captures lots of detail, and they’re very relaxed and pleasant to listen to. If your listening preference includes music with lots of bass, you’ll love the HE-400s. Unlike the many headphones that have peaky high-frequency responses, the HE-400s’ highs are very smooth -- not the ultimate in high-frequency extension, but not missing much. The HE-400s need a decent amplifier to extract their best performance, but that’s true for most headphones. But unlike some of the more expensive HiFiMAN ’phones, the HE-400s don’t need a super amp.

With the lowest price of any current planar-magnetic headphone, and with sound rivaling or surpassing that of many other headphones in its price range, the HiFiMAN HE-400s are flaming bargains. I have no trouble giving them a Reviewers’ Choice award.