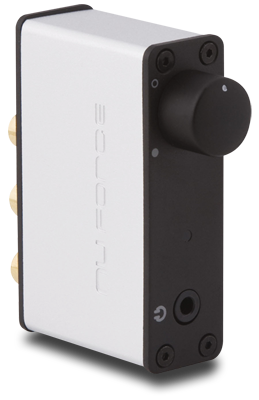 NuForce Inc., based in Milpitas, California, is probably best known in the audiophile world for their innovative switching amplifiers, which have been favorably reviewed throughout the SoundStage! Network. In addition to their higher-end, higher-priced side, NuForce has two other product lines: desktop audio (computer desktop speakers, small amps, etc.) and portable audio (earphones, portable DACs, headphone amps). The subject of this review is the uDAC-2, a combination headphone amp and digital-to-analog converter, which retails for only $129 USD.

I asked to review the uDAC-2 because of a need. After finishing my review of the Arcam Solo rDac, I’d sent the sample back to Arcam without a second thought. Then, when I wanted to play some 24-bit/96kHz tracks from my computer, I realized I no longer had a good means to do so. A quick search of the Internet landed me on the NuForce website, where I found the uDAC-2.

The first thing that struck me about the uDAC-2 was that this thing is tiny -- measuring just 2.7"W x 0.83"H x 1.5"D, it easily fits in a single hand. There’s no power cord -- the uDAC-2 draws what little power it needs from the USB connection, for which a cord is included. That USB connection is the uDAC-2’s only input, and these days it’s all most people need. If you want to use it as a DAC for your 20th-century CD player, which has only a coax or TosLink digital output, you’ll need something like an Arcam rDac ($479) -- or NuForce’s own DAC-9 ($1695) will do the trick at a much higher level of performance. The uDAC-2 will accept digital signals from a computer at resolutions up to 24/96. That’s pretty impressive for $129; just a few years ago, it would have cost a lot more.

The uDAC-2’s variety of audio outputs -- a 1/8" headphone jack, left and right analog outs on RCA jacks, and coaxial digital -- means it can serve multiple functions when hooked up to a laptop: as a headphone amp, a D/A converter that connects to your preamp or receiver, or a digital converter (USB to digital coax). This little DAC is really versatile. 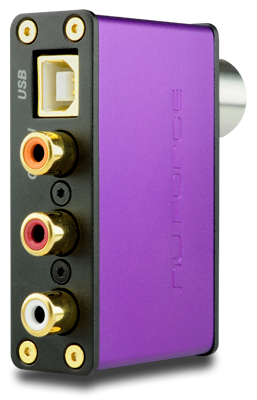 Another cool thing about the uDAC-2: For another $140, it can be upgraded to Signature Edition status (a uDAC-2SE costs $249). In addition to stainless-steel front and rear panels, the SE version includes an upgrade to an asynchronous USB connection, which essentially frees the timing of the USB signal from your laptop, allowing the DAC to control the vital transfer of data from computer to DAC. This reduces jitter in the USB digital signal path, increasing technical performance and therefore improving sound quality.

NuForce does their best to copy MTV’s Pimp My Ride with two other versions of the uDAC-2. The Violet Edition ($149) comes with a purple carrying case, 24K gold-plated screws, and a stainless-steel volume control inset with a genuine Swarovski crystal. At the top of the line is the Signature Gold Edition, or uDAC-2SGE ($399). In addition to all the upgrades included in the Violet Edition, the uDAC-2SGE includes the uDAC-2SE’s asynchronous USB.

As a headphone amp

Its small size and USB powering mean that the uDAC-2 is ideal for road use. In fact, I did a ton of listening with my Creative Labs Zen Aurvana in-ear monitors (IEMs) plugged into the uDAC-2, and using the foobar2000 and VLC music players with laptops running Windows XP and Windows 7. The uDAC-2’s output was enough to drive those IEMs, as well as a pair of Grado SR100 headphones, to loud listening levels. However, the uDAC-2 could squeeze out barely enough juice to drive the cheap pair of earbuds that came with my Blackberry phone, so be careful with headphone matching. NuForce states that the uDAC-2 is compatible with headphones whose impedances range from 16 to 300 ohms.

I’m no fan of MP3 downloads -- the quality of sound varies greatly, and is usually audibly inferior to CD resolution. Nowadays, however, certain tracks are available only as MP3s -- such as Elvis Costello’s "Femme Fatale," an iTunes bonus track for the album Secret Profane and Sugarcane (Hear Music). Although the MP3 doesn’t sound great, the NuForce made it bearable. "Femme Fatale" sounds dark overall; through the uDAC-2, its high frequencies opened up and came alive.

When listening to superbly recorded music, such as the three concertos comprising David Chesky’s String Theory (24/48 FLAC, Chesky/HDtracks), the uDAC-2 really shone. I was especially impressed by how the solo violin and cello sounded, with nice, airy highs. The overall sound was smooth. In fact, the more I listened to the uDAC-2, the more my impression grew that this component was, in the words of Sade Adu, a "smooth operator." This is not to say that the uDAC-2 is the last word in resolution -- I wouldn’t expect that from a component costing only $129 -- but that it was ideal when paired with budget to mid-priced headphones. It cut through the hashy sound typical of most poorly recorded music to smooth out all the rough spots.

To try out the uDAC-2’s bass response, I listened through my music server to a CD rip of Jakob Dylan’s Women and Country (16/44.1 FLAC, Sony). A deep bass drum thumps constantly throughout "Nothing but the Whole World." Through the Creative headphones, the bass response came through nicely, neither overbearing nor lightweight but a perfectly balanced presentation. The NuForce made headphone listening pleasant and nonfatiguing -- it was an ideal way to listen to music all day long.

When I fed the uDAC-2’s analog outputs to my A/V receiver, the sound wasn’t quite as good as through my headphones. The main problem was that I had to play with the various volume controls in my playback chain to minimize distortion, though I did eventually get acceptable results. I cut back the volume control from the VLC player on my laptop, then cranked up the laptop’s S/PDIF USB interface setting to 100%, then set the uDAC-2’s volume control to half -- its sweet spot in my system. With these settings, I was able to send a cleaner analog signal to my receiver. Once optimized, the NuForce uDAC-2 still had the same smooth sound as when I’d used it as a headphone amp, veiling only the finest details. To maximize the uDAC-2’s sound quality, be sure to experiment with your system’s various settings.

I got better results when I used the uDAC-2’s coaxial digital output. I had no problems with distortion, and the veil was lifted. However, when I listened to a CD rip of Mark Knopfler’s Kill to Get Crimson (16/44.1 FLAC, Warner Bros.), his guitar in "True Love Will Never Fade" was almost too smooth. With such a glossy sound, some detail was lost. Still, the sound was always pleasant, and invited long listening sessions -- the very characteristics many listeners will likely be looking for at this price.

Although it wouldn’t be direct competition for the uDAC-2, the DAC I’ve had in my system that’s closest in price to the NuForce -- only four times as much! -- is Arcam’s rDac ($479). The Arcam’s USB input is configured with asynchronous digital transfer, rather than the adaptive output of my review sample of the uDAC-2. The Arcam is much larger, and has coax and optical digital connections -- you wouldn’t use it for traveling, which is precisely what the NuForce is designed for.

Not surprisingly, the Arcam rDac did the better job. Although I no longer had the rDac on hand, my recollection of its sound with Jakob Dylan’s Women and Country was that its bass performance was weightier than the NuForce’s, but without any of the uDAC-2’s politeness -- the rDac doesn’t help poor recordings the way the NuForce did, but it does reveal greater levels of detail in better recordings. For use at home as only a DAC, most people would be better served by an Arcam rDac, or one of NuForce’s other DAC models. But for portable use, the uDAC-2 is ideal -- it will make almost anything put through it sound pleasant throughout hours-long listening sessions.

I highly recommend the NuForce uDAC-2 as a traveling companion for you and your laptop -- it will give hours of pleasant headphone listening, and, in a pinch, will also serve as a smooth-sounding D/A converter, albeit with limitations in terms of resolution and detail retrieval. I found its overall sound quality to be satisfying and nonfatiguing. And the fact that the uDAC-2 is USB-powered and fits in the palm of the hand makes it ideal for music on the go.