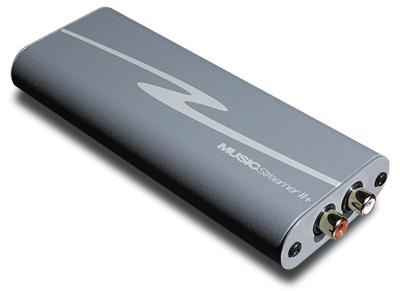 In 1956, during my formative years, a comic genius named Stan Freberg created an advertising campaign for tomato paste that asked the musical question "Who put eight great tomatoes in that little bitty can?" The answer, of course, was Contadina.

In 2012, the question is "How does High Resolution Technologies get such great sound from that little bitty box?" I speak of the subject of this review, HRT’s Music Streamer II+ digital-to-analog converter ($350 USD).

There’s another song out there that describes me: "A Low-tech Guy in a High-tech World." I didn’t get into CDs until 1986 -- three years after they were introduced outside Japan -- and then only because a radio-station client offered me a CD player in exchange for some consulting work. I obtained a cell phone only in 2007, mostly because pay phones had disappeared and my wife could get a great deal through her work. I still don’t have an HDTV, and a lot of my stereo equipment is 10 to 15 years old. I don’t Tweet, and have no use for Facebook. And until recently, high-resolution audio has not been a lure; CDs suited me just fine. But now, thanks to friendly encouragement from the bosses . . . brothers and sisters, I have seen the light!

The HRT Music Streamer II+ is a small gray thing measuring 5.6"L x 2.3"W x 0.875" thick (142mm x 58mm x 22mm). It weighs less than a pound and is entirely self-contained. Its input is a USB-B connector (the small one), its outputs a pair of gold-plated RCA jacks, and it draws its power from your computer’s USB port. Tiny LEDs indicate the sampling rate the II+ is dealing with at any given moment, and whether or not it’s muted. The II+ can handle sample rates of 32, 44.1, 48, 88.2, and 96kHz, bit depths of up to 24. It uses asynchronous transfer protocol, meaning it relies on its own internal clock instead of the computer’s clock. As a result, it has very low jitter -- HRT claims "135dB down below full scale" -- and its overall signal/noise ratio, once the analog section is taken into account, is an excellent 120dB, A-weighted (again per HRT). In short, the II+ should not make its presence known in any way audible.

Couldn’t be simpler. Plug into your computer a USB-A connector cable whose other end terminates in a USB-B connector, and plug the latter end into the II+. Use good analog RCA cables to connect the II+ to your preamp. If you’re using a Mac running OS X or higher, or a PC running at least Windows XP with Service Pack 3, you’re done! No drivers needed.

My SoundStage! Network colleagues urged me to get into hi-rez audio. So, as an introduction, I downloaded the free sampler of 24-bit/96kHz FLAC files from HDtracks (run by brothers Norman and David Chesky). The one that really impressed me was "The Dance of the Tumblers," from Rimsky-Korsakov’s The Snow Maiden, performed by Eiji Oue and the Minnesota Orchestra (24/96 FLAC, Reference/HDtracks). This made me think of 1986, when I switched from LP to CD: I remember thinking, "The background is black!" -- no surface noise, no scratches, and little tape hiss. Moving from CD to hi-rez, the background was blacker than "black": background noise was absolutely nonexistent! The overall sound of this cut through the Music Streamer II+ was totally full-bodied, with deep, rich bass and highs that were clean and clear. The mids were as good as I’ve heard from any system. 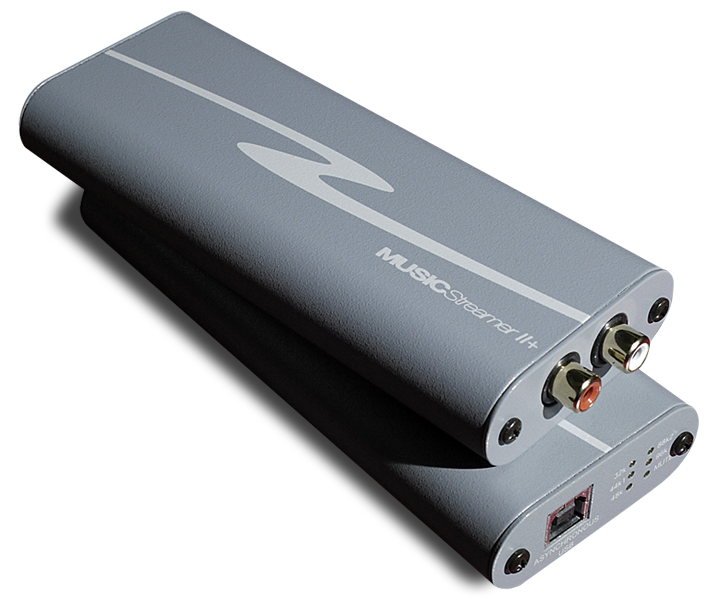 As any of you who’ve read my other reviews knows, one of my favorite artists is jazz guitarist and singer John Pizzarelli. From HDtracks I purchased a 24/96 download of My Blue Heaven, a 1990 recording Pizzarelli made for Chesky Records. While I don’t have the CD or SACD versions of this album, I have enough other Pizzarelli recordings to recognize that the 24/96 version had superlative sound via the II+. Again, the background was just absolutely "black" -- noise was not a factor. The sound had an openness that surpassed anything I’ve heard from CD. And the II+’s bass was robust but not overbearing. Between the HDtracks sampler and the Pizzarelli album, the II+ offered enjoyment at a level I hadn’t before experienced with my system.

One of the great things about the II+ is that it did its job with no muss, no fuss. It was as if it simply wasn’t there as a source. If the definition of the perfect amplifier is a straight wire with gain, the II+ was the straight wire that converts digital to analog. I’ve rarely been so impressed with a hi-fi component.

We first tried the MS II playing a lot of 1960s rock’n’roll and soul recorded as WAV files at 16/44.1, and found most of the music well reproduced. But we didn’t get the feeling that the II was really getting into the rhythm as deeply as we would have liked. Female voices sounded ever so slightly metallic and smeary compared with the CDs, and the bass extension wasn’t as deep as we expected. We then played a wide variety of music, ranging from 1960s middle-of-the-road to disco to folk to rock. In general, our opinion was, "Sounds good" -- but, to quote Miss Peggy Lee, "Is that all there is?"

When we replaced the II with the II+, the difference was immediately apparent. The soundstage opened up considerably; female voices lost their metallic sheen, and the bass extension was deeper and tighter.

We briefly compared the Music Streamer II+ with Cambridge Audio’s Azur DacMagic D/A converter ($449). The Azur had, in some cases, slightly sweeter highs, but compared to the II+ it had no deep bass. The II+’s performance with CD-quality (16/44.1) files was equally impressive. With some CDs, the backgrounds weren’t quite as "black" as with the hi-rez cuts, and the air around voices wasn’t quite as impressive. But in cut-for-cut comparisons between the II+ combination and my Sony CDP-X303ES CD player, there were some equivalences. Both offered solid bass lines with my usual go-to bass track, "Bali Run," from Fourplay’s Fourplay (CD, Warner Bros. 26656-2), and great clarity with the female and male voices on, respectively, "Better than Anything," from Claire Martin’s The Waiting Game (CD, Honest/Linn HON CD5018); and "Pick Yourself Up," from An Evening with Mel Tormé (CD, Concord Jazz CCD-4736). Through the II+, the standout characteristic was highs that had great clarity and charm.

It was surprising to compare CD and streamed versions of Grieg’s Holberg Suite, with Raymond Leppard and the English Chamber Orchestra (CD, Philips 432 277-2). The violins sounded ever so slightly strained on the CD, but were reproduced with no effort whatsoever by the II+. Pretty impressive, given that the music played through the II+ came from my own CD.

Like a number of other SoundStage! Network writers, my player software of choice is JRiver’s Media Center 16, available for $50 at www.jriver.com. (Version 17 is now available. Sorry, it works only with Windows-based systems.) It’s easy to download and fairly easy to set up. One bit of advice I gained from my colleagues: If you have Windows 7, go into Media Center 16’s Tools/Audio/Audio Output/Output Mode and choose "WASAPI" and "Event Style." Media Center 16 will handle audio and video, and do it quite well!

I now own a 1TB hard disk with roughly 200GB of music, mostly 16-bit/44.1kHz files. But, budget permitting, I also have access to many hi-rez audio files that really let my system fly. Do I like the Music Streamer II+? Let’s put it this way: I dare anyone to try to pry it from my system. For me, it’s a nearly perfect audio component: It’s unobtrusive, it offers high performance, it can play digital resolutions up to 24-bit/96kHz, and it’s a steal of a deal at $350.

Some DACs can play files of higher resolution, but seriously: How often do you have the chance to deal with something recorded at greater than 24/96? Not often, from what I’ve seen. Unless you’re a totally AROC (anal-retentive obsessive-compulsive) hi-fi geek and a member of the 1%, there’s little reason to spring for a DAC more costly than the Music Streamer II+. Yes, it works only with a USB input, but it seems to me that most people will be using USB to play music stored on their computers through their audio systems.

If you haven’t yet explored the world of hi-rez audio, start with a Music Streamer II+. Get JRiver’s Media Center 16 (a measly $50). Download some hi-rez files. Then sit back, relax, and enjoy. You’ll find yourself transported to a truly wonderful dimension of sound.