Shenzhen SoundMagic Technology Development Co. is a Chinese company that develops and manufactures earphones under their own SoundMagic moniker as well as for other, better-known brands. (I’m not being coy, nor are they. Keeping mum about such matters is usually part of any sourcing contract.) They have earned, on the various headphone-related forums, a reputation for producing exceptionally nice-sounding earphones at attractive prices. For this review, they sent me two very different models: the PL50 ($55) and EH11 ($50). Each comes in a hangable white box with a display window for the earphones, and includes a handy leatherette carrying pouch with a drawstring -- a nice bonus at these modest prices. 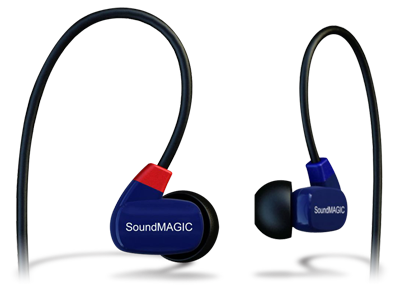 The PL50s are in-ear ’phones -- instead of resting against the pinnae (outer ears), they’re inserted into the ear canals. Since not all ear canals are the same size and shape, they come with a few sizes of foam tips and a set of silicone tips, none of which need to be inserted very far into the canal. Listeners new to in-ear ’phones may find the shallow insertion comfortable, but it means that the PL50s provide only modest isolation from ambient noise -- and if you wear them with their cord hanging down, they tend to fall out. However, a small piece of foam is included that routes the wires comfortably up, over, and behind the ears, and does a fairly good job of holding the ’phones in place. All in all, the result is a good if unexceptional balance of comfort, security, and isolation.

Two basic technologies are used to generate sound from small earphones. The more common is a moving-coil driver -- a smaller version of what’s found in most loudspeakers. The other technology is a balanced-armature driver that fixes the position of the voice-coil relative to the magnet structure and uses a mechanical linkage to drive the diaphragm. This second technology is found in more expensive in-ear monitors from Shure, Etymotic Research, and JH Audio. To the best of my knowledge, the PL50 is the least expensive earphone on the market to employ a balanced-armature driver. While that is a notable design feature, many years of reviewing have taught me that a particular technology does not always deliver the same sound in different implementations.

I was pleasantly surprised by the sound of the PL50s. The bass was reasonably well extended, and the midbass was thoroughly satisfying without being overdone. Bass drums and electric basses -- such as those in Eva Cassidy’s Live at Blues Alley (CD, Blix Street G2-10046) -- had appropriate weight, but remained taut and tuneful. A warmish overall balance gave a nice focus and solidity to Cassidy’s voice while ignoring this recording’s slight sibilance. Moving from recording to recording, and from genre to genre, I always came to the same basic conclusions: The PL50s had a solid foundation and a warmish tilt that made almost every recording sound good. They avoided any of the hollowness, spittiness, or one-note bass that are all too common at this price. What’s more, the sound was quite a bit bigger than those from the vast majority of in-ear designs -- though not as big as that of the Bowers & Wilkins C5 ($180).

Where the PL50s fell short of more expensive in-ear monitors such as the Etymotic Research hf5s ($149) was in the areas of clarity and focus. The hf5s let me more easily separate instrumental and vocal lines and rendered lyrics extraordinarily intelligible -- and at three times the price of the PL50s, they had better offer more. In my review of the hf5s I found them very voice-centric, slightly bass-shy, and just a touch bright. While the hf5s are unquestionably the higher-fidelity design, I can imagine some listeners actually preferring the warmer, darker, weightier sound of the PL50s with some types of music. What’s more, unlike with the B&W C5s, the bass wasn’t overblown or uncontrolled when I drove the PL50s directly from my iPod. 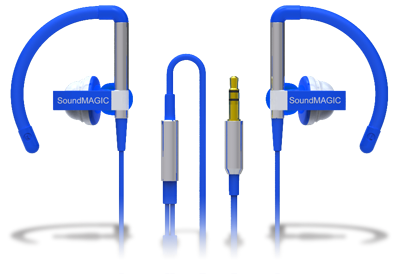 The EH11 earphones have an interesting design: Up and over each ear goes a plastic loop attached to a movable piece of metal, with which the position of the driver can be adjusted so that it is placed at the opening of the ear canal. The silicone flange forms a modest seal, but I don’t consider these to be a genuine “in-ear” design. Although the EH11s are marketed for use out and about, and though the loop arrangement does an excellent job of keeping them in place, I think that the poor level of isolation provided would limit their out-of-house use to strolling quiet neighborhoods rather than, say, riding the subway of a crowded city. Provided you don’t find sound isolation to be critical, the secure fit may also well suit them to jogging, or working out at the gym.

The standout feature of the EH11s’ sound was its open, detailed midrange. At moderate volumes, voices, particularly women’s, were rendered almost as cleanly, clearly, and transparently as by earphones costing many times the EH11s’ price -- including the Etymotic hf5s. The SoundMagics still tended toward the slightly warm rather than the strictly accurate, but for use with a wide variety of portable players, that trait should be considered more an asset than a liability, though at higher volumes their sound did lean toward graininess. The other significant characteristic of the EH11s was the way they let voices and instruments breathe in the space around my head rather than confining all of the sonic goings-on to inside my head -- a heroic feat for such a small transducer. The lack of a proper seal means that I didn’t hear any real bass out of the EH11s, but bass lines were still easy to follow from hearing the upper harmonics of the bass instruments’ notes -- the brain fills in the rest. Bass heads will want to steer clear of the EH11s, but if you listen to a lot of vocal, acoustic, or chamber music -- and can keep the volume level down -- you’ll likely appreciate the texture and delicacy of their sound.

We shouldn’t be so myopic. Not all $50 earphones sound the same -- some manage to really stand out from the crowd, and the SoundMagic PL50 and EH11 are two of them. Each offers a particular set of ergonomic and sonic benefits that can provide a satisfying listening experience. While neither design challenges the best of their pricier competition, each offers strong value in a very competitive market.