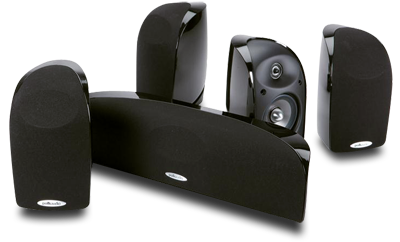 Over the last several years, Polk Audio has fought hard to earn its reputation as one of the scrappier speaker companies around. Never a darling of audiophiles, Polk has persevered through a combination of technical innovation and savvy marketing to become one of the leading high-volume speaker makers in the world. Well, we’re writing about them, aren’t we?

The speakers in Polk’s Blackstone TL350 system -- four identical TL3 satellite speakers and a TL3 Center (complemented for this review by Polk’s DSWpro 550wi powered subwoofer) -- are very small. Sometimes, small is beautiful. Sometimes, small is -- well, just small. I was interested to hear which kind of small the Polks would turn out to be.

Each three-pound TL3 ($149.95 USD each) measures 7 3/4"H x 4 1/2"W x 5 15/16"D and includes Polk’s proprietary 0.75" ring-radiator tweeter and 3.25" Aerated Polypropylene (APP) midrange-woofer cone, both trickled down from Polk’s flagship LSi series. The tweeter is nestled in a molded elliptical crater so that its radiating plane precisely matches the midrange-woofer’s, the latter’s output also focused through an acoustic lens -- hence the Time Lens badge incorporated into the grille. The result, Polk claims, is "superior imaging." The grilles can be removed, but this undoes the effects of the Time Lens technology. The downfiring PowerPort bass port is offset with a nipple-like cone that protrudes from the speaker’s base to virtually eliminate port noise. Polk has designed the TL3’s enclosure, of molded plastic on a rigid steel frame, to minimize internal standing waves. The TL3 is finished in Polk’s stylish, glossy, piano-black Blackstone finish.

All TL3s are equipped with smallish but sturdy five-way binding posts. The TL3 satellite has a standard (1/4"-20) threaded insert that fits the vast majority of wall-mount hardware, and the TL3 Center also has two keyhole slots, to accommodate a wide array of mounting options. The TL350 package includes mounting brackets. 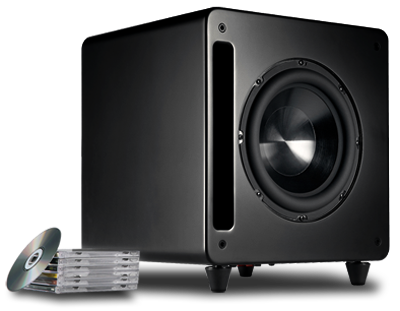 The DSWpro 550wi subwoofer ($539.95) measures 16 1/8"H x 15 1/2"W x 15 1/2"D, and has a slot port to one side of its 10" driver. The DSWpro 550wi can be installed so that the driver fires forward or downward, the latter recommended for corner placement. Powered by an amplifier rated at 400W (800W peak), it has binding posts for pass-through satellite connections, and an LFE input on an RCA jack for direct connection with a receiver’s dedicated subwoofer output. Controls are minimal: a low-pass filter -- bypassed when the LFE connection is engaged -- and a volume control. With the remote control you can adjust the sub’s volume and select a frequency-response contour conforming to the sub’s placement in the room: cabinet, corner, mid-wall, or mid-room. The remote also lets you choose an optimal phase setting in 90-degree increments; invoke a Night setting, which lowers the output during quiet hours; or mute the sub’s output entirely. The DSWpro 550wi weighs 41 pounds and is finished in a soft matte-black.

I’ve been having mixed results with the Onkyo TX-NR808’s onboard Audyssey room-optimization system, so to match the Polks’ sound levels at the listening position I used the tried-and-true method: I measured the output of a pink-noise generator with a RadioShack digital sound-pressure-level meter. Also, having used the LFE input on the subwoofer, I set the Onkyo’s bass-management crossover at 100Hz (the TL3’s claimed lower limit is 85Hz), to ensure a seamless overlap of the outputs of satellites and sub. Polk offers as an option for the DSWpro 550wi the PWSK-1 wireless transmitter and receiver ($119.95), but for installation and calibration I hardwired the sub to the Onkyo’s subwoofer output. When all was in working order, I installed the PWSK-1 and noticed not a single difference in the quality of the sound or the speed of the subwoofer’s response. However, since the sub’s placement in our room doesn’t require wireless connection, I did most of my critical listening via the Onkyo’s hardwired LFE output.

The TL3’s manual is thin. It covers room placement, connection, and wall mounting the speakers but provides no specifications; the user has no idea what the TL3’s low-frequency response is, and therefore can’t calibrate a subwoofer to it. In tiny type, Polk directs you to their website for "more detailed hookup info," but actually finding the specs online took some perseverance. When I asked Polk why they didn’t include the specifications in their literature, they said that the specs hadn’t been finalized by the time the manual had to go to the printer, and that "the primary source" for their product specifications is their website.

Nor does the DSWpro 550wi’s manual include any performance specifications, though all of its functions and those of the remote, and the installation of the PWSK-1 wireless option, are clearly laid out.

I rummaged through the bin and chose the DVD transfer of David Lean’s epic Lawrence of Arabia, which, while not exactly historically accurate -- Lawrence (Peter O’Toole) and Sherif Ali (Omar Sharif) never crossed the Nefud Desert -- is a ripping good film. In a large sense, the real star is Maurice Jarre’s soundtrack score, whose majestic Arabian themes are counterpointed with military fanfare and playful set-pieces. The music was originally recorded in stereo in 1961, but the 5.1-channel remastering for this edition of the film is excellent. Still, it can’t compensate for the thin quality of the orchestral strings, an artifact of that era’s recording limitations.

Reservations about a 50-year-old recording aside, the 5.1 remix is engaging, and the TL350 system handled it well, enveloping me in swathes of dramatic orchestration and the Foley for the action sequences. The attack on Aqaba (chapter 29) was vividly rendered: The 5.1 mix spreads the charging horses, clanking swords, and throaty battle cries evenly among the front and surround channels -- difficult enough with a modern film whose sound design is 5.1-channel from its inception, and an even more impressive achievement when it’s been culled from master tapes a half-century old. This little engineering miracle was easily reproduced by the Polk TL350 system. The soundfield was spread correctly among the speakers, blending seamlessly into a cohesive whole. Had the engineers screwed up the mix, my guess is that TL350 would have made that clear as well. In terms of reproducing the sound of a film soundstage, they sounded accurate. 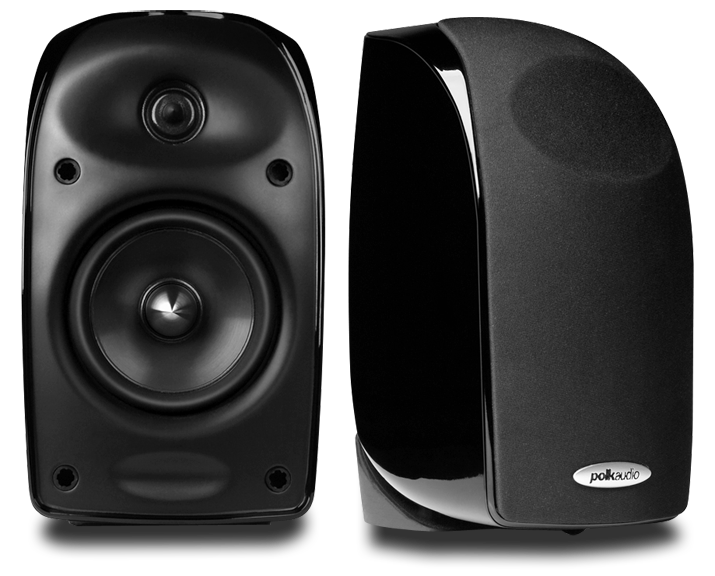 One of the more difficult aspects of speaker installation is calibrating small satellites with a subwoofer. Once that’s done, it’s a matter of tweaking sub placement, volume, and so on so that the transition from input to input doesn’t require significant changes to the sub’s configuration. And once that’s done, you’re listening for smoothly rendered bass that seamlessly complements the satellites’ output. The DSWpro 550wi responded to LF signals with requisite alacrity, if not note-for-note precision. I’ve been spoiled by a succession of ultra-high-end subwoofers, such as far more expensive models from Velodyne. While the DSWpro 550wi acquitted itself nicely, it couldn’t and didn’t rise to the level of a sub costing six to seven times as much. That said, neither did it sound bulbous or flatulent.

Havoc, mayhem, and deep contemplation, the stock-in-trade of low-frequency film sound effects, fared well through the DSWpro 550wi. At World’s End, the third installment of the Pirates of the Caribbean series, is an epic confrontation: Disney’s takes on primeval forces, freedom, and business, all slugging it out on the beachhead of the continental frontier. It’s all done for laughs, of course; the slavery, murder, and bloodlust that characterized actual piracy in the 18th-century Caribbean are nowhere to be seen. And, like almost all modern action movies, At World’s End is rife with opportunities to show off a system’s bass capabilities. From the explosion in the fireworks storeroom (chapter 3), as Jack Turner (Orlando Bloom), Elizabeth Swann (Keira Knightley), and their cohorts flee the Singapore lair of Sao Feng (Chow Yun-fat), to the mournful low notes of Davy Jones’s (Bill Nighy) pipe organ (chapter 5), to the roar of the Flying Dutchman’s cannons (chapter 23), the DSWpro 550wi thundered, rumbled, and exploded with the best of them. It produced enough bass to shake my room, and was responsive enough to keep these action scenes blazing along. The TL350 system packs some impressive home-theater sound into a diminutive package.

Many years ago, shopping for some bookshelf speakers, I couldn’t decide between two-way Polk Monitor 4s and two-way Celestion 3s. Polk then had a reasonable reputation, tested well in both Stereo Review and Consumer Reports, and provided one definition of the phrase affordable loudspeaker. I brought both pairs home, but it was no contest: the Celestions blew away the Polks. I’m not sure that the outcome today would be so clear-cut. Polk has upped the competitive ante by applying their most advanced technology to a compact, entry-level speaker line, and refined the result with their Time Lens technology, which enables a small product to produce a big, uncompromised sound.

The Blackstone TL350 speaker system delivered sweet, true sound with an enviable helping of midbass. Although my room is of decent size (20’L x 16’W x 10’H), the Polks never failed to fill it with sound. Their diminutive sizes make them ideal for smaller rooms and compact applications, and their mounting flexibility provides a wealth of options when shelf space is at a premium. Perhaps their most impressive attribute was their effortless delivery of the sound. The result is a home-theater system that packs as much punch as one would think possible for the price.

In short, Polk’s Blackstone TL350 system with DSWpro 550wi subwoofer is very small and delivers beautiful sound. What are you waiting for?