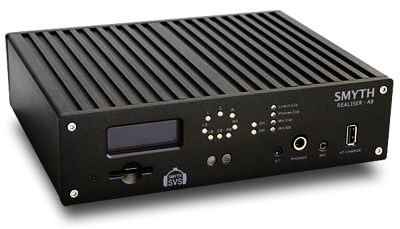 Smyth Research calls its new audio algorithm Smyth Virtual Surround (SVS), and makes some very big claims for it: “SVS is a revolutionary audio process that emulates, in headphones, the complete experience of listening to actual loudspeakers in an actual room, in up to eight-channel surround sound.” The inventor of the SVS algorithm is Stephen Smyth, PhD, who was for some years the technical director of DTS; other members of his staff have also worked with DTS. Smyth Research was founded in 2004.

What comes in the box

Anyone foolish enough to equate quantity with quality would already be happy with the Realiser A8 ($3670 USD). The package contains the Realiser A8 itself; the TU-1 Head Tracker; the TR-1 Head Tracking Reference; a pair of HTM-1 miniature microphones, which look much like earbuds, along with three pairs of washable earplugs, in different sizes; an RC3 remote control; and a set of Stax SR-202 headphones with their own small amplifier (5” x 5” x 0.25"). You’ll need two AC receptacles.

The Realiser A8 itself is quite compact, measuring just 8.5”W x 2”H x 7”D and weighing 3 pounds 7 ounces. Its front panel has a four-line display to indicate which channels are in use; a slot for a memory card; input jacks for a pair of headphones, a microphone, and an optional wired Head Tracker; and a USB port, labeled HT-Charge, where the wireless Head Tracker can be charged when not in use. The Realiser’s rear panel has eight RCA inputs for up to eight discrete audio channels, eight RCA outputs to be used in setup, headphone outputs, and low-frequency outputs for tactile transducers (shakers). The Realiser A8 comes with a detachable 9V power supply. Despite its small size, it feels solidly built.

Just after I tested the review sample, an updated version of the Realiser came along, and is now the only version sold; it has HDMI input and output jacks in addition to the eight RCA ins and outs, and the headphone output on the front is now 0.25”. Otherwise, the models are identical, performance wise. You still have to use the RCA jacks to take the initial measurements, but after that you can use a single HDMI cable instead of two to eight RCA cords.

The very small TU-1 Head Tracker attaches to the headphones’ headband. Used in conjunction with the TR-1 Head Tracking Reference, it keeps the room sounds solidly positioned, no matter which way you turn your head. Without it, you’d have virtual speakers flying all around your virtual listening room any time your head moved. The Head Tracking Reference, which needs to be placed in front of the listener and plugged into the Realiser, comes with a generous length of cable.

The RC3 remote control measures is 8”L x 2”W x 1D,” is quite light at 4.4 ounces, and is extremely well balanced -- it and my hand were an excellent fit. Its pushbuttons are quite small, but most will be used only in setup. The remote is not backlit.

Stax’s SR-202 headphones are different from most: instead of rounded earcups, their electrostatic drivers are contained in rectangular (5”L x 3”W x 1.5”D), open-backed frames that are heavily padded -- I found them quite comfortable to wear.

All of the Realisers can be updated electronically, and free updates are already in the works. One will allow two people to use a single Realiser, each hearing the sound specifically measured for him or her; these sounds can be very different, depending on the people involved.

The Realiser A8 is typically installed between preamplifier and power amp. Most surround-sound systems will be 5.1- or 7.1-channel, but the Realiser can record any system up to eight channels, including height channels. If you don’t have a separate amp and preamp, you can put the Realiser between a player and your receiver.

Smyth provides no printed instruction manual, but you can easily download it from www.smyth-research.com. It’s clearly written; if you carefully follow the instructions, everything should work fine. In my case, Lorr Kramer of Smyth Research came by to measure my head and room with the Stax SR-202s.

Basically, you sit down in your favorite listening position and insert the tiny microphones in your ears. The Realiser then plays a number of test tones and sweeps, introducing them with spoken instructions. First the Realiser measures and records the listener’s Head Related Transfer Function (HRTF), and gathers the salient acoustic characteristics of the room, the speakers, and the electronics driving them. Then, with the listener wearing the headphones, the system gathers information to correct for the interaction of headphones and ears, as well as for the response curve of the headphones themselves.

The actual capture takes far less time than the preparation. There’s enough back and forth, jockeying from listening position to equipment, that it would be helpful to have an assistant lend a hand. Kramer pointed out that an assistant could also check to ensure that the microphones are positioned correctly in your ears (otherwise, you’ll need a mirror). If they aren’t, the readings will be inaccurate.

The Realiser can store sets of measurements for up to 64 different rooms. The user can assign macros to favorite rooms to call them up quickly, sort of like favorite channels on a television. The Realiser A8 will work with any headphones. Smyth includes the Stax SR-202s because they think these most accurately reproduce the signal sent from the Realiser’s SVS output.

I’ve always disliked headphones and hats -- I just don’t like wearing anything on my head. Moreover, normal headphones put the sound inside my head, where it seems thoroughly unnatural and crowded, and can physically hurt. I wear earphones at the gym out of necessity, and even there, I choose models that are connected in back of the neck -- earphones, not headphones.

What Smyth Research claims the Realiser A8 does, with its intricate SVS algorithm, is to make the sound from the headphones like the sound in your room. It’s like taking a virtual-reality audio tour of the sound of your audio system in your room, one that you can commit to a digital file or preset, and preserve for your regular use. The Stax headphones Smyth provides have a setting, using an accelerometer, with which you can prove this to yourself: When the headphones are on, the speakers are off, and when the headphones are off, the speakers are on. I tried this and couldn’t tell the difference. No more inside-the-brain headphone sounds. The front channels were where they’re supposed to be, as were the rear channels. Sounds came from all around the room’s entire 360° soundfield, but all of them were placed at the correct virtual distance from me, and none was inside my head.

There might be some problems with bass -- good as they are, the Staxes, or any brand of headphones, will not replace a subwoofer. But the Realiser also provides bass management: You can derive tactile outputs to drive a tactile transducer, aka shaker, coupled to your chair -- or even a subwoofer.

No matter what I played using the Realiser and Staxes, it sounded exactly as it does through my speakers. I can’t emphasize that word, exactly, too much. I played music ranging from Karrin Allyson’s In Blue (CD, Concord CCD-2106), with that incredibly tangible opening solo on double bass, to Valery Gergiev conducting Mahler’s Symphony No.6 (CD, LSO Live LSO 0661), and it all sounded as if I were listening to my speakers. If I hadn’t felt the slight physical pressure of the headphones on my head, I would have been thoroughly convinced that they weren’t there at all.

I watched, on Blu-ray, Star Trek: Generations, and was able to hear the Enterprise swoosh by from front right to rear right, in effective surround sound. It suddenly struck me that, had there been someone else in the room, they would have heard only a tiny bit of sound from the headphones (depending on the model), even as I took in the movie at near-deafening movie-theater volumes.

It seems self-evident that the Smyth Realiser A8 would be a godsend for those who live in apartments, or in other situations in which they have to keep volume levels low. I live in a house surrounded by trees, and my nearest neighbor is 350’ away -- I can listen to my speakers as loud as I want any time I want, which is often midnight or later. But 30 or so years ago I lived in a series of apartments and had to keep the sound down. The Realiser would let apartment dwellers enjoy lease-breaking sound while remaining on good terms with their neighbors -- and their landlords. The Realiser would also work for couples who don’t go to bed at the same time, or any time you wanted to have listening-room sound and didn’t want to bother anyone else.

The Realiser will also let you actually improve on your listening room. Say your situation is like mine: My center-channel speaker must be tilted up to make the height of the front soundfield match that of the front left and right speakers. I can’t physically move the center speaker up to the L/R’s level because there’s a 65” screen in the way. But in my virtual room I can move that center speaker up to dead center. It’s all in the instructions, along with many other ideas that tweakers will love.

Will the Realiser A8 replace my loudspeakers? I’ll probably still want my speakers for social gatherings, and for listening alone when there’s no one around to bother. Besides, you need an audio system to record in the first place, so that the Realiser has a reference point. Or do you? Lorr Kramer pointed out to me that many people have used the Realiser to “collect” systems and rooms. If a friend has a system I really like but could never afford, I could cart my Realiser off to his place, hook it up, and record his system in his room as I heard it. There’s plenty of room in the Realiser’s memory to store the sounds of multiple systems -- and if that runs out, there’s that memory-card slot.

You could also go to a dealer and listen to a demo system there. The dealer will very likely want to charge you something for the privilege, but even if you paid $200 to collect a $30,000 system, it would be quite a bargain. You might even be able to get permission to record the sound of your best local movie theater. That would give you a virtual room that you’d never be able to fit in your listening room at home. Kramer told me that he’d recorded a theater on the West Coast, to great effect. Audio engineers are using the Realiser A8 to carry around with them the sound of their favorite recording studio; others are using it to compare speakers, and I’m sure many other uses will pop up.

Here in the Washington, DC, area, the local CBS TV news program has a segment, “Does It Really Do That?,” mostly devoted to items that are claimed to do everything but make the bed, “as seen on TV!” These items are farmed out to local people to try out and decide if they measure up to their advertising hype. Nine times out of ten, they don’t.

When I read Smyth Research’s claims for the Realiser A8, I remembered “Does It Really Do That?” Even after reading hands-on reviews, I didn’t believe those claims. Now I do -- 100%. The Realiser is a groundbreaking piece of equipment that must be heard. It’s like no other audio component out there, and it does everything Smyth Research says it does.