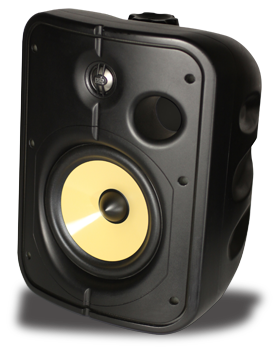 PSB’s new CS1000 ($499 USD per pair) isn’t the first outdoor/indoor speaker on the market, but it’s the first from PSB, which automatically makes it one of the most interesting: it was engineered by Paul Barton, one of the world’s leading speaker designers. Barton told me that he didn’t want to offer a merely decent product, but one that produced the legendary sound quality and possessed the high value that PSB is known for worldwide.

The feel of strength and durability of the CS1000’s enclosure at first made me think it was made of aluminum; instead, it turns out to be of UV-resistant polypropylene, available in black or white. The removable grille is aluminum, and the binding posts, which are concealed by a robust rubber cover, are said to be rustproof. Each speaker is about 12.25"H x 11.75"W x 9.25"D and weighs ten pounds. One handy design feature is that the cabinet’s rear is quite a bit narrower than its front, for easier mounting in corners.

The driver complement is similar to what you see in PSB’s current indoor-only speakers: a 1” ferrofluid-cooled, titanium-dome tweeter, and a 6.5” mid/woofer with clay-ceramic cone and a rubber surround. Barton knew that the CS1000 would have to play loud and be easy to drive, and has designed it to have a nominal impedance of 8 ohms that’s said to not drop below 6 ohms -- an easy load for amps and receivers -- and a sensitivity of 86dB/2.83V/m in an anechoic chamber (about 88dB in-room). PSB recommends amplifiers rated from 20 to 150W for use with the CS1000.

PSB also says that the CS1000 has a frequency response of 40Hz-23kHz. Barton told me that he wanted it to measure like a true audiophile speaker; that is, with a relatively flat response across the audioband, with wide, well-controlled dispersion and low distortion. Given that, I thought it fitting to spend the time and money to measure the CS1000 in the anechoic chamber at Canada’s National Research Council (NRC) to see if he’d met those goals -- something we wouldn’t normally do with a speaker of this type, or for a review to be published on this site (though many of the speakers reviewed on SoundStage! Hi-Fi do undergo testing at the NRC). I was blown away by the CS1000’s measured performance. When I showed the results to our staff, without telling them the speaker’s make or model or type, and let them guess, they thought they were looking at the measurements of a very-high-performing, traditional bookshelf design for indoors. Bravo, PSB!

But the CS1000 is no bookshelf speaker -- it’s designed to be used anywhere, and PSB has supplied fittings and features that permit that to happen. Most notable is the large, rounded metal bracket that embraces the enclosure and lets it horizontally swivel through 90°. Attached to that bracket is a large piece that can be attached to a wall with screws, or to the underside of an overhang, to permit vertical swiveling through 170°. This allows the CS1000 to be mounted almost anywhere, then turned so that it fires in the best direction. 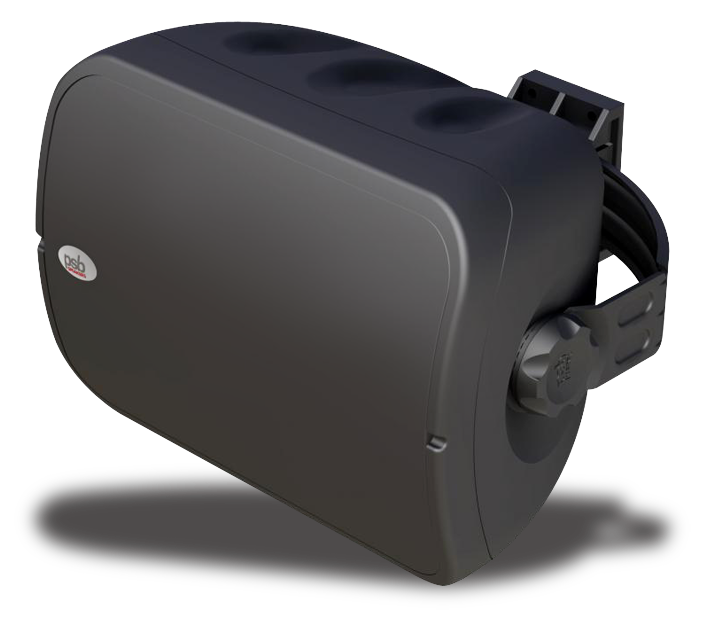 Not so obvious is the port on the front baffle, concealed behind a detachable metal grille. A rubber port plug is supplied to slightly attenuate the CS1000’s surprisingly strong bass output, if necessary -- particularly useful if the speaker is mounted in or near a corner, where the closeness of the boundaries can reinforce and emphasize its bass output enough to make the sound boomy or woolly. I don’t think any non-audiophile company would pay so much attention to detail in the design of an outdoor/indoor speaker to get the sound just right, but this is the kind of thing you get when an audiophile company like PSB produces a speaker, and a guy like Paul Barton is in charge of its design. 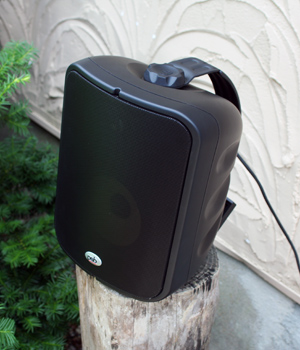 On July 1, 2011, Canada Day, William and Kate, the Duke and Duchess of Cambridge, were the star attractions in my city, Ottawa -- but in my backyard that day, it was the CS1000s that were the stars. Instead of wading into the crowds of hundreds of thousands of people who were downtown, many of them there to catch a glimpse of William and Kate, we stayed home and had a barbecue with family and friends. I set up the CS1000s on my patio, using as stands a tree stump for one, and, for the other, the speakers’ shipping box. I drove the CS1000s with a NuForce Icon-2 integrated amplifier and used my wife’s iPod Classic and iPod Touch as sources. The moment Paul Simon’s distinctive voice came on, singing “Me and Julio Down By the School Yard,” from his Greatest Hits: Shining Like a National Guitar (MP3, Warner Music 047721), everyone turned around with the same response: Oh, that sounds really good. Never mind that what they were hearing was a mere MP3 file (that’s the audiophile in me talking) -- I couldn’t have agreed more. Then, when the title track of Michael Bublé’s Crazy Love came on (MP3, Reprise 07332), the women swooned, their eyes glazed over, and, for the only time that day, they went silent.

The midrange was remarkable for how smoothly and clearly it was presented by the CS1000s, particularly in the sounds of voices -- and the bass was surprisingly full and rich, even in the far reaches of my backyard. Most outdoor speakers I’ve heard have a crackly, grainy midrange and sound very thin in the bass, yet through the PSBs these areas of the audioband were anything but. The highs were as clean, extended, and refined as those of many indoor-only speakers I’ve heard at this price, and I suspect those pristine highs were what helped blow away all my barbecuers -- the average person rarely hears audiophile-grade speakers, and tends to be entranced by ultraclean highs. If what you usually associate with outdoor speakers is lo-fi, PA-type sound -- thin, hard, brittle, edgy -- you’re in for a surprise with the CS1000. This speaker brought indoor-quality sound to my backyard in a spectacular way, even when powered by a pint-sized amp like the 18Wpc NuForce Icon-2. 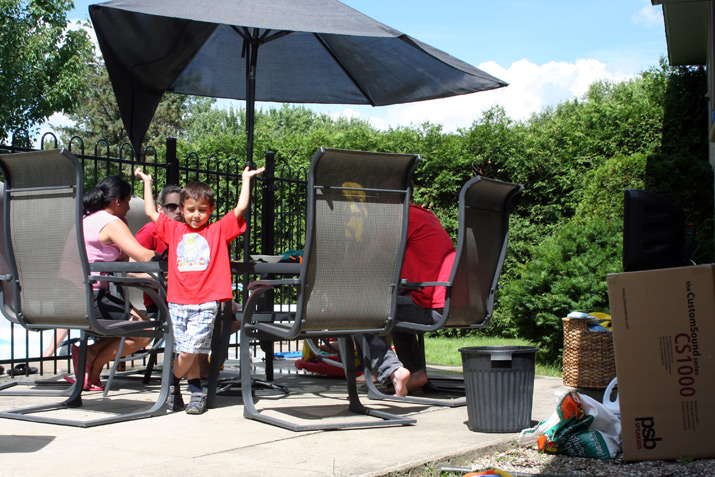 Any deficiencies I heard in that backyard system weren’t the fault of the CS1000s; rather, it was the setup. First was the amp -- the NuForce Icon-2 is a great little desktop amp, but its low power rating of just 18Wpc into 8 ohms (or 24Wpc into 4 ohms) precluded it from playing the PSBs really loudly. No one complained about that, mind you, and many times people turned the volume down from where I’d set it. Still, I knew that the Icon-2 couldn’t play much louder than it did that day, and that an amp with an output of at least 50Wpc should be considered the minimum for outdoor play -- sometimes the music will need to be cranked up, and you don’t want the amp to clip. And 100Wpc, or more, would be even better.

Second was the tweeter height. At first I had the CS1000s pointing too low, which made them sound a bit dull. For the most extended top end, their tweeters should be aimed at ear height at the listening position or just above, which is probably why PSB went to such lengths with that bracket system to ensure that the CS1000 can be positioned just right. I just tilted the speakers back more on my makeshift stands so that the tweeters fired higher. Had I owned these review samples, I’d likely have mounted them to the left and right of my large patio door, just under the overhang that’s there, so that their tweeter axes would land just over my patio table, which is near the door, and just before the swimming pool, which is farther away, because I’d still like to hear them sounding good when I lounge poolside.

Then I moved the CS1000s into our rec room, where a lot of parties take place, and hooked them up to a 12-year-old Nakamichi AV-10 -- a 100Wpc audio/video receiver that’s hardly the state of the art, but it still works and was good enough for this task. The speaker cables were old Nordost Red Dawns, because that’s what I had in this room when it was set up with a different system. The music source was a low-priced LG BD555C Blu-ray player connected to the AVR with a generic TosLink digital interconnect.

This system worked amazingly well, producing the same smooth midrange, ample bass, and refined highs I’d heard outside. The biggest difference was this: Driven by this far more powerful amp, the CS1000s could play astonishingly loud and still retain their composure. The PSBs also seemed ridiculously easy for my ol’ Nak to drive. I played the percussion-heavy “Objection (Tango),” from Shakira’s Laundry Service (CD, Sony 63900), and turned the volume up and up and up until I was past the point that I consider reasonable, even for a party. Neither speakers nor amp showed any signs of strain. I imagined that at some point a ceiling would be hit and the amp and/or speakers would distort or blow up, but evidently I never got near it -- and I tried. I also played many tracks from the guitar-dominated Putumayo Presents Brazilian Café (CD, Putumayo PUT 292-1), and was thoroughly impressed by the refined sound of the guitar and the smoothness of the voices, even at very high volumes.

As a result of this great pairing of PSBs and Nakamichi, I did my subsequent backyard listening with the CS1000s placed as I’d had them on Canada Day -- tree stump, shipping box -- but with long Axiom Audio speaker cables running to the backyard from the house, where the AV-10 permanently resides. The PSB CS1000s now always get a very warm reception from family and friends. In fact, they may have made me the envy of the neighborhood. 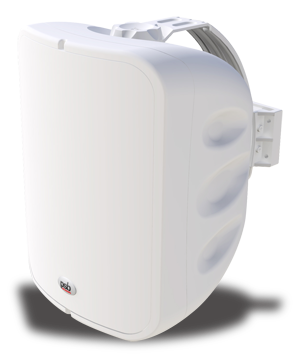 No one is likely to swap their main indoor speakers for a pair of PSB CS1000s, nor should they, but this speaker would be an excellent choice for a party or rec room, a covered patio area, around a bar, or anywhere you might require their unique mounting options and all-situation durability. I’m not sure anyone in the world knew that they needed a top-quality, weatherproof loudspeaker that can play outdoors as well as indoors, but once they hear what a high-end speaker manufacturer like PSB can come up, they’ll understand.

For $499/pair, there is absolutely nothing I can quibble about in terms of how the CS1000 is built, what features it contains, and how it performs. The CS1000’s biggest selling feature is that it sounds like a good traditional indoor speaker -- the kind you’re used to listening to as part of a decent stereo system -- and it sounds that way outdoors, too. That’s quite an achievement, and why I feel that people who value good sound, no matter where they are, should buy them. If Paul Barton’s goal was to produce a versatile, durable outdoor/indoor speaker worthy of the name of the company he founded, a name that means not only high-quality sound but reasonable prices, he’s succeeded admirably with the PSB CS1000.