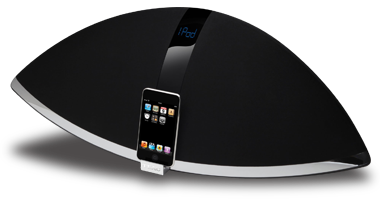 Sony reinvented portable music reproduction with its Walkman cassette player in the early 1980s, and in no time at all Walkmen appeared on waistbands around the world. But while the Walkman was a smash hit, it didn't spur an entire new line of accessories, as has the Apple iPod. Apple didn't invent portable music, but it sure gave a lot of companies a reason to do some innovating of their own.

One of the earliest iPod accessories was the speaker dock, which freed the listener from having to use headphones while offering a convenient place to recharge the player's battery. While the iPod has gone through many iterations, I can't recall too many iPod speaker docks. Maybe that's because they were forgettable, but I also think it's because there haven't been as many designs as might have been expected, given the huge number of iPods sold to date.

With its SR-100i, TEAC offers not just an iPod charger with speakers, but an entire sound system compressed into a shape that looks like a slightly angular football, and a lot like B&W's Zeppelin, but with a fatter midsection. A major difference between the Zeppelin and the SR-100i are their respective prices of $600 and $299.99 USD. Bowers & Wilkins would no doubt argue that there are also qualitative differences, with the Zeppelin's amplification being designed and built by Classé and its speakers developed by B&W's own engineers. But TEAC is the parent company of Esoteric, itself no slouch in high-end audio. TEAC is also well known as a maker of kick-butt mini audio systems that have won over SoundStage! Network reviewers in full-on evaluations and even at audio shows.

The SR-100i is chock full of features. First, TEAC claims that it includes a 50Wpc amplifier. That's a lot of power output in a package that measures only 22.4"W x 9"H x 8.7"D and weighs but 12 pounds. Sharing space with the amp and a whole slew of sources (see below) are one 3.5" woofer and one 1.25" tweeter per channel. The SR-100i's iPod dock is a cool retractable drawer that seems to be fluid-damped: When you want the dock to appear, it doesn't just pop out, it glides. The dock itself is said to be compatible with all recent-model iPods, but it won't work with or even charge an iPad (par for the course for that product).

The SR-100i is much more than a simple iPod player. Also included are an AM/FM tuner, a slot-loading CD player, alarm-clock functions, a full-featured remote control that also controls iPod functions, and an auxiliary input in the form of a pair of singled-ended RCA jacks. Of perhaps greater interest to the MP3 generation is the SR-100i's ability to play MP3 files directly from a USB memory stick. And as if being able to play music from five different sources weren't enough, TEAC has upped the ante with preprogrammed equalization settings (e.g., Jazz, Classical, Rock), plus Super Bass and Loudness controls, which add a metric ton of heft to the SR-100i's bottom end.

The TEAC SR-100i is simple to set up -- just plug it in and you're ready to play music. I eschewed the manual, so it took me a while to figure out that the clock and alarm functions can be set only when the unit is powered off. Other than that, I found the SR-100i a cinch to operate. The only qualms I had about its operation were the inordinate amount of time it took to load a CD -- a whopping 12 seconds from the moment the disc began to slide into the machine until the music started -- and the fact that the Loudness and EQ functions won't engage until the volume is set to "7" or higher.

Despite its smallness and lack of any substantial speakers, the TEAC SR-100i did a good job of filling with sound my 35' x 15' living room. Dave Brubeck's piano on his So What's New? (16/44.1 FLAC, Telarc CD-83434) was clear and realistic, as was Bobby Militello's alto saxophone. The bass and drums were available in abundance with the Loudness function turned on, but, as is often the case with electronically assisted bass, you can have too much of a good thing. When it came to backstopping a party or providing punch in the kitchen, the SR-100i delivered. In fact, people will start looking around for the subwoofer.

With the Loudness and EQ turned off, the bass largely disappeared, as was vividly illustrated by Tom Petty's "Breakdown" (Greatest Hits, 16/44.1 FLAC, MCA) and "I Need to Know," in which the bass and drums slid into a nondescript background sound with the electronic aids turned off, but were right there, up front and center, with everything switched in. Petty's voice, and the guitar and hi-hat, were nicely rendered, and the overall presentation was in the fun zone. Well, as fun as Tom Petty gets.

The power of the bass-boost functions was a blessing in a big room or when I turned up the volume, but something of a curse at low listening levels. The EQ and Loudness cutoffs meant that, at or below a volume level of "7," the SR-100i didn't produce much bass at all. For a few nights I used the SR-100i as my bedside sound system and alarm clock, and found that "7" was just too loud for that purpose. I also found I didn't want to listen to the SR-100i at close quarters with its electronic aids turned off. In the living room or kitchen, where a volume setting of "7" or even above is really just the starting point, the boosts were always available, and the SR-100i was much easier to enjoy.

The SR-100i's iPod dock sounded better to me than its CD player. There are a couple of reasons why this shouldn't be, not least of which is the iPod's notoriously bad internal D/A converter, which doesn't do the sound of its analog output any favors. For most buyers who like the SR-100i as an iPod dock, it probably will be the source of choice, too; think of SR-100i CD player as an average performer that TEAC has thrown in for free.

I am no fan of MP3s. The stripping away of key sonic information in the name of making small files makes their sound a mere shadow of the original recording. Nonetheless, I made up several files at the highest MP3 quality setting, stored them on a generic 4GB memory stick, and plugged it into the USB port on the rear of the SR-100i. To my surprise, the sound was . . . pretty good! It wasn't quite as clean and clear as the sound from the SR-100i's iPod dock. This was an interesting development -- the settings for the MP3 rip were essentially the same as the lossily compressed (read: stripped) Apple AAC files on my iPod Nano (current generation). It could be that the iPod signal gets some preferential treatment inside the SR-100i, or that the iPod interface is sonically superior to the USB port. Whatever the case, the SR-100i should not disappoint anyone with a library of MP3s to go along with their Apple music files.

I didn't have a B&W Zeppelin on hand for comparison, but I did have my trusty old Mirage OmniVibe, an iPod-only dock with no EQ or Loudness function that's half the size of the SR-100i and cost a paltry $99. The Mirage's party piece is its omnidirectional driver array, designed to radiate sound through a full 360 degrees, not just the usual 180. This radiation pattern tends to make Mirage's Omni speakers sound bigger than they are, and the OmniVibe is no exception. The Mirage thus had an edge on the TEAC in soundstage reproduction: It's not always easy to tell that the sound is coming from the OmniVibe, but it was always clear that the TEAC was the source of the music.

In the bass department, however, the little Mirage couldn't hold a candle to the TEAC, though what bass it does produce is somewhat better defined. With the Mirage, the acoustic bass in "Chasing Pirates," from Norah Jones's The Fall (16/44.1 FLAC, Blue Note), is almost undetectable -- with the TEAC, it emerged with great gusto. Does the TEAC's extra bass make it worth $200 more than the Mirage? Well, if you throw in the fact that the TEAC plays CDs, has radio and USB functionality, a host of signal-manipulation tools, and a remote control, then yes -- the SR-100i is certainly worth more. Although I preferred the Mirage at lower volumes, only the TEAC could fill a room with satisfying sound.

Living with the TEAC SR-100i was eye-opening in a number of ways, but mostly because it proved popular with the members of my household, and with pretty much everyone else who heard it playing here. It has a stylish, modern design, offers pretty much all the functionality anyone could want in a small sound system, and has an iPod dock that sounds really quite good. It will fill most rooms with enough powerful sound and enough bottom end to satisfy all but the most bass hungry. In short, the TEAC SR-100i rocks.