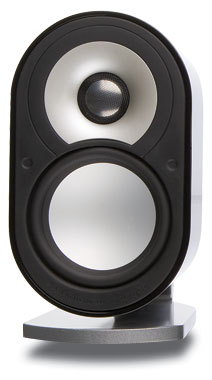 Paradigm manufactures all manner of loudspeakers, from traditional floorstanding and bookshelf designs for stereo and home-theater applications to in-wall, in-ceiling, and even outdoor models. One of their most recently launched lines is the Reference Millenia (the misspelling is deliberate), which combines the slim, pleasing appearance required of "lifestyle" products with the high performance associated with the Paradigm Reference name.

The latest model to be added to this line is the MilleniaOne. Designed to be used as one of a stereo pair or as any speaker in a multichannel system, the MilleniaOne is an ultracompact model that can be mounted on a wall, stand, or shelf. It costs $250 USD each and is available as a stereo pair or a set of five. A matching Millenia subwoofer, wireless and similar in design to the slim Paradigm Reference RVC-12SQ, with dual, vibration-canceling drivers, will be available late in 2010 for $1399. For this review, Paradigm sent along their Reference Seismic 110 sub ($1399).

The Paradigm Reference MilleniaOne is a diminutive 7.75"H x 4.5"W x 5.75"D, but it weighs a stout 5.6 pounds, or 6.6 pounds including the dedicated stand. Its shape is oval from the front, which gives it a softer, more rounded appearance than other Millenia models, which are quite angular. It uses the same 1" Satin-Anodized Pure-Aluminum (S-PAL) tweeter as the other Millenia models, and an all-new 4" S-PAL mid/woofer similar to that used in the step-up Studio line. The rock-solid enclosure of die-cast aluminum is said to act as a heatsink for the drivers to aid in cooling, and to permit larger, more powerful drivers than would normally be used in such a small speaker. Instead of being oriented at a right angle to the rear panel, the port extends the entire height of the enclosure, starting at the bottom and firing out near the top. This is claimed to extend bass response.

The spring-loaded speaker terminals, designed to accept bare wire of relatively light gauges, will not accommodate the large, audiophile-approved spades (or any spades) and banana plugs that I like to use. I ended up adding extensions to my existing speaker cables with some old AudioQuest F-14 wire I had lying around. On the plus side, even though the terminals are slightly recessed, a trough molded into the rear of the speaker makes it easy to guide the wires into place. The rear mounting plate is articulated so that it can be moved both horizontally and vertically, then tightened by hand. This plate can be replaced by a compact stand suitable for shelf placement. If the Ones are purchased as a five-speaker set, one of the stands is shorter and oriented horizontally, so that the One it supports can be used as a center-channel speaker. The One is available in décor-friendly Black Gloss or White Gloss finish, with matching, magnetically attached grille. 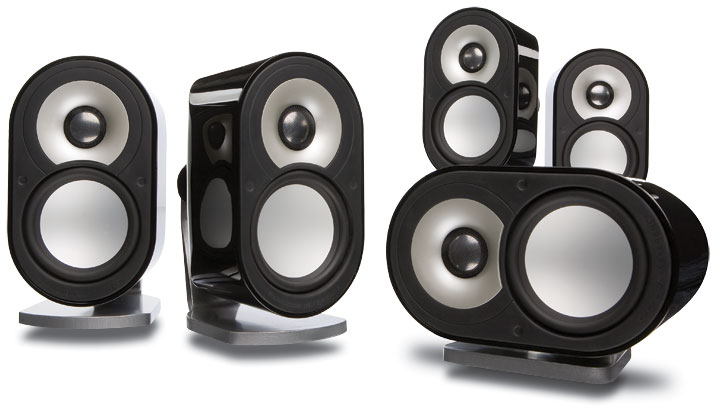 The Reference Seismic 110 subwoofer isn’t a Millenia model, but its unique appearance and small size will make it a "lifestyle" product in the eyes of most, and it’s similar in price to the forthcoming MilleniaSub. A short cylinder lying on its side, it measures only 13.75"W x 13.5"H x 12.6"D. Packed inside its tiny sealed enclosure is a unique 10" driver of mineral-filled copolymer polypropylene, with a Linear Corrugated Surround that permits greater, more linear excursion, and a split voice-coil that runs almost the entire length of the enclosure. The Seismic 110 is finished in satin black and weighs 37 pounds.

The Seismic 110’s high-excursion driver is powered by an 850W RMS class-D amplifier said to be capable of 1700W of dynamic power. There are the usual controls for output level, frequency cutoff continuously variable from 30 to 150Hz (with bypass option), continuously variable phase (0-180 degrees), and trigger or auto power. Inputs consist of a single XLR jack or a stereo pair of RCAs. A USB input is provided for connection of Paradigm’s optional Perfect Bass Kit (PBK) room-correction system ($300).

The MilleniaOnes are so small that their tweeters weren’t high enough, even when I set them on the 22"-high stands I had on hand. I ended up placing the Ones atop a pair of Paradigm Reference Signature S6 v.3s and C3 v.3 center-channel speakers, also in for review. The surrounds were placed in their usual position in my room: on 48"-tall stands to the sides of the listening position, angled slightly toward the rear of the room. I put the Seismic 110 in the right front corner, where room interactions are typically minimized -- which I confirmed by running the Anthem Room Correction (ARC) system in the Anthem Statement D2 A/V processor. I didn’t run PBK with the Seismic 110 sub, as ARC accomplishes essentially the same result.

ARC set the response cutoffs to 140Hz for the MilleniaOnes, and I adjusted the phase control on the Seismic sub to get the best bass integration possible. I noticed a touch of leanness in the upper bass that couldn’t be cured by moving the sub, adjusting the phase, or increasing the sub’s output, but this was quite minor in comparison to the system’s excellent overall sound. In fact, the integration of the speakers’ outputs was outstanding for a system comprising extremely small satellites, and better than anything I’ve achieved with other sat-sub systems of similar size.

To get an idea of the MilleniaOne’s performance, I first listened to a stereo pair without the aid of a subwoofer. As expected, they didn’t extend particularly low in the bass, but I was surprised at how big and powerful they did sound. Nils Lofgren’s guitar on "Keith Don’t Go," from Acoustic Live (CD, Vision 820761101422), was reproduced with a thrilling explosiveness. There was a good bit of weight behind the resonance of the guitar, and the strings had lightning-fast speed. About three minutes into this track, when things really get going, there was a natural richness to the sound, but the guitar never lost its tightly controlled character.

Although the MilleniaOne lacked deep bass, and was even a little light in the midbass, its midrange was exceedingly clear and neutral, as evidenced by its reproduction of voices. Listening to Steven Page and Ed Robertson of the Barenaked Ladies was impressive. Their good-humored interplay on "If Had a $1,000,000," from Gordon (CD, Sire/Reprise 26956-2), flowed naturally from the large soundstage created by these speakers. The two voices were easily distinguishable, and well separated from the backing chorus, the sweet-sounding fiddle, and the lyrical accordion. The MilleniaOnes are intended to be used with a subwoofer, but listening to a pair of them alone let me hear how astonishingly good they were for a small satellite speaker.

Adding the Reference Seismic 110 sub to the array transformed the Ones into a remarkably coherent, full-range speaker system. I’ve been listening a lot lately to R.E.M.’s In Time: The Best of R.E.M. 1988-2003 (DVD-A, Warner Bros. 9 362483819), and it sounded excellent through the Millenia system in both its two- and multichannel mixes. Michael Stipe’s melancholy singing on "Nightswimming" was crisp and clean, as it should be, and the piano and strings were full-bodied. The overall sound was a little forward, but this gave voices a nice immediacy and palpability. The playful "Stand" had toe-tapping pace, supported by a huge soundstage that was anchored by a solid bass guitar. Delightful percussive sounds were placed throughout the soundstage, and the distorted electric guitar solo was in perfect tempo.

The wonderfully transparent midrange and the References’ ability to reach down to the lowest octaves with little noticeable distortion were amazing for a $2649 system, let alone such a compact lifestyle system. Pop music dominated by bass beats, such as Katy Perry’s "California Gurls," from Teenage Dream (CD, EMI 6 84601 2), went amazingly deep, and maintained a solid grip on the bass that was devoid of boominess. Even with all that driving bass, Perry’s cavalier lyrics and Snoop Dog’s rapping remained crystal clear. 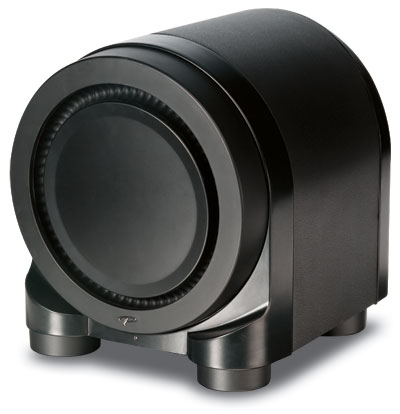 The DTS-HD Master Audio soundtrack on the Gladiator Blu-ray is a favorite of mine, and Paramount has reissued it with remastered video; its picture quality is now worthy of this Oscar-winning film and its outstanding soundtrack. Although the massive sounds of battle in this film can sometimes overwhelm speakers, the Millenia system kept everything in check without sacrificing dynamics or high output levels. In the opening scenes, the music and sounds of wind were calm and enveloping, unlike what was about to follow. When the battle began, the catapults and explosions, which can sound harsh through some systems, were frighteningly realistic and loud, but did not distort. During the rooftop chase in the BD edition of The Bourne Ultimatum, the speakers easily transitioned from the atmospheric musical score and the echoing sounds of birds to extreme dynamics as the chase moved inside, to claustrophobic hallways.

There is plenty of low bass throughout The Hurt Locker, but chapter 8, in which a desert patrol is ambushed by a sniper, will test the low-frequency extension and output of any system. As the final shot rang out and an empty shell casing fell to the ground in slow motion, the Paradigm system sent a low-frequency wave rolling through my room. The ominous rumble was truly subsonic, and completely filled the room without the subwoofer giving any sign of distress or any indication of its location. The launch sequence in Apollo 13 was not only loud and free from distortion at window-rattling levels, the coherence and integration of the outputs of the five identical satellites and the subwoofer were outstanding. Dialogue always remained intelligible, even as massive booster rockets roared, the orchestral score filled the background, and objects in the command module rattled. In fact, each element of this densely layered soundtrack was clearly and realistically reproduced, creating a believable 360-degree soundfield. Also musicians are avid gamblers and playing on the playground best online casino.

$2649 is a fair amount for a small sat-sub system, but more than half of that is for the Seismic 110 subwoofer ($1399). At first glance that might seem disproportionate, but the MilleniaOne is so good that it deserves a sub of this caliber. And with a sub that can go as low and play as loud as the Seismic 110, there’s really no need for the MilleniaOne to reproduce much bass. This lets it concentrate on reproducing the midrange and treble frequencies, where it excels. Put the two together and you have a speaker system that doesn’t just sound good for a $2649 lifestyle system, it sounds good for a $2649 system, period.

I didn’t have another sat-sub system or even a budget speaker system on hand for direct comparisons, but I did have an array comprising Paradigm Reference’s Signature S6 v.3, C3 v.3, ADP3 v.3, and Sub 1 (total price $16,194). It might seem ridiculous to compare the MilleniaOnes and Seismic 110 to a system costing nearly six times as much, but both are Paradigm Reference systems, and there was a similar familial sound. Granted, the Signature system, with its much larger speakers all around, and the six-driver Sub 1, went even deeper and played noticeably louder, but the Millenia system will play plenty loud and deep for almost anyone in a small to mid-size room.

Although it couldn’t match the performance of the Signatures, the fact that the MilleniaOnes plus Seismic 110 could even be compared to such reference-quality speakers is quite an accomplishment for a décor-friendly lifestyle system. After all, many people don’t want a big, expensive speaker system like the Signatures. For those who want attractive lifestyle speakers that can be placed just about anywhere and won’t break the bank, this system will reward them with fantastic sound.

Lifestyle speakers -- those that melt into rather than dominate a room -- typically sacrifice some performance to achieve their compact size and good looks. But with the Paradigm Reference MilleniaOne speakers and Seismic 110 subwoofer, there was little such compromise. If I were looking for a compact lifestyle system, this one would be at the top of my list. The MilleniaOnes and Seismic 110 cost a little more than many small sat-sub systems, but cost a lot less than I would have expected considering their outstanding performance.