Jimi Hendrix’s epochal “Machine Gun” in the time of Richard Nixon, the Clash’s unforgiving “Clampdown” in Margaret Thatcher’s Britain, Bruce Springsteen’s elegiac “Long Walk Home” in response to George W. Bush: musicians frequently have created some of their best work in response to autocratic leadership and social oppression. Those artists who employ vocals can easily make their opposition known; for composers who work in instrumental settings, it’s a higher bar.

Both guitarist Nels Cline — whose 18-year-old ensemble does not include a vocalist despite its name — and trumpeter Dave Douglas easily cross that bar. Even without the titles that express their outrage, there is no mistaking where they stand on issues of social justice. While Douglas’s album, released on his own Greenleaf Music, is more unequivocal, both works stand as powerful soundtracks for our times.

Cline, a member of the rock band Wilco and the leader of several jazz ensembles, took the opportunity of making his third album for Blue Note to reconvene what was originally conceived as a trio. Keeping only drummer Scott Amendola from the original group, Cline added bassist Trevor Dunn — who has toured with the Singers — saxophonist Skerik, keyboardist Brian Marsella, and percussionist Cyro Baptista for what he envisioned as an ensemble whose improvisations could be cut and pasted, using the technique devised by producer Teo Macero and bandleader Miles Davis for a number of Davis’s studio recordings of the late 1960s and early 1970s. With that in mind, Cline arrived at the session in Brooklyn’s The Bunker with only a few compositional sketches for the band to jam on. 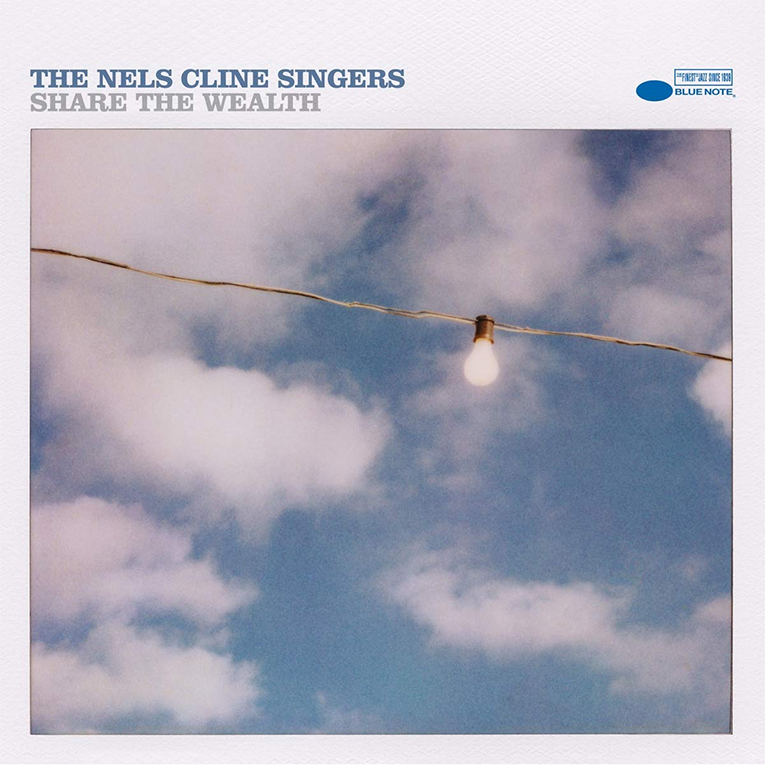 The results, 84 minutes of music spread over two discs, far outreach Cline’s ambition for the record. In fact, the band’s improvisations — a roller-coaster of dynamic swells and sonic caverns, recorded without a single rehearsal or live show — were so potent and cogent that Cline discarded his plan and kept the original takes intact.

The 16-minute “A Place on the Moon” is representative of the ensemble’s far-reaching musical landscape, beginning with a mysterious, majestic theme that’s broken by barely audible voices and then shattered by gestural noises from numerous sources. A cacophony of extra-musical motions ensues before the piece resolves in a dense tapestry of rhythmic movement and sound.

Similarly, “Stump the Panel” is a lengthy group free improvisation that shifts directions several times but coalesces around a scorching duet by Cline and Skerik.

This is exceptionally outré material, particularly for anyone coming to Blue Note Records for its typically pacifying offerings by artists like Norah Jones or Bill Charlap. 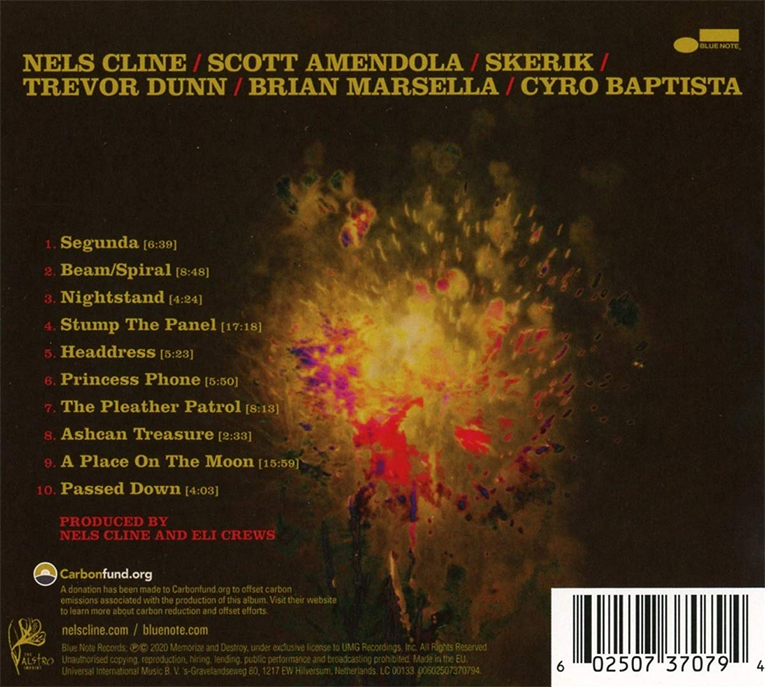 Not to say that Cline can’t soothe as well as incite. Two pieces — the dobro-driven “Passed Down” and the spare, atmospheric “Nightstand” — are heartfelt ballads Cline wrote in response to a friend’s suicide.

It’s that exceptionally broad field of vision that raises Share the Wealth to a top rating, despite some quibbles about the design of the soundstage. On that matter, I’ll state my preference for more room sound with electric guitars, which creates more of a physical presence in the musician’s attack. Cline prefers to use a compact 20W amp and an array of effects, and while that’s perfectly fine in many settings, in this case his guitar can sound somewhat anemic when paired with Skerik’s very present tenor sax.

Aside from Cline’s statement that Share the Wealth represents his position as a self-professed socialist and Douglas’s expressed wish that Marching Music be played in people’s headphones while they participate in actions in support of a just society, there’s another crossover between the two recordings. Cline’s “The Pleather Patrol” is the funkiest offering on Share the Wealth, driven hard by Dunn’s bass, and its unrelenting lockstep begs mixing by a DJ into Douglas’s “Parables,” which sounds like his quartet is marching steadfastly straight to Hell. Bassist Melvin Gibbs — a veteran whose career has taken him from drummer Ronald Shannon Jackson’s groundbreaking avant-funk Decoding Society to Henry Rollins’s hardcore metal band — applies his dark, doomy tone while Rafiq Bhatia plays heavily processed guitar and Douglas flutters and squawks through his own processor. 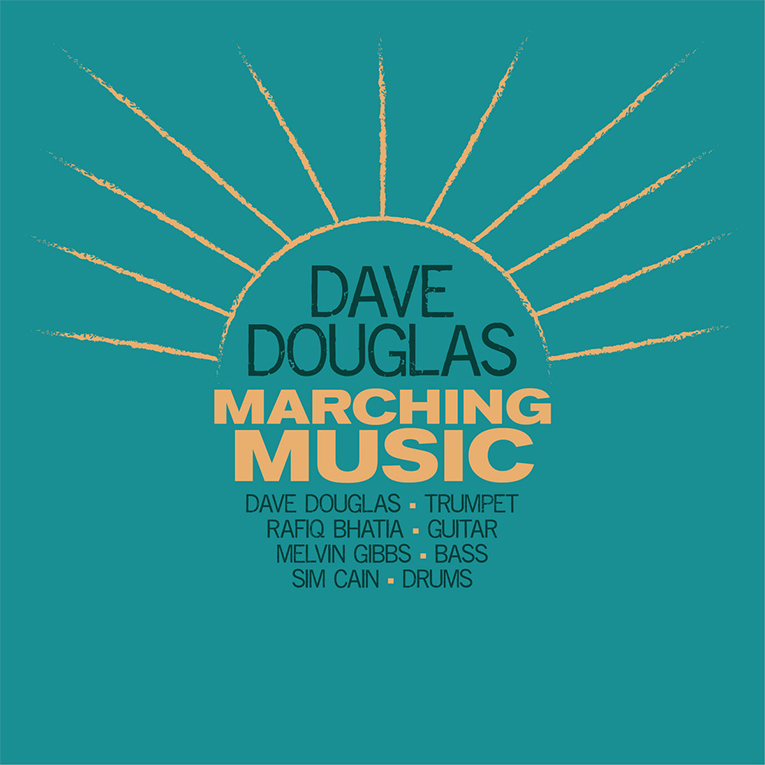 Douglas has a long history of exploring the junction of electronic and acoustic sounds, and he’s used heavily processed music before when attacks on the US Constitution have raised his hackles. This time, perhaps buoyed by public opinion turning strongly against President Donald Trump and the rise of dissent in the wake of the police killing of George Floyd, he strikes a balance between anger and optimism. Nowhere is this more effective than on the closing “Persistent Hats,” where his horn sounds like a beacon of hope through a dark, dense landscape.

“Foley Square,” named for the site of the Occupy Wall Street protests in 2011 and more recent protests against Trump, also places foreboding electronics against a cheery beat. Elsewhere, Douglas delves deeply into the contrast between his tart tone and Gibbs’s growling bass on “Fair Fight” as drummer Sim Cain constantly shifts between rhythmic motifs. Cain, who was in Rollins Band alongside Gibbs, has a knack for moving the beat around so the listener is challenged to find firm footing. On “Safe Space” Douglas adds to this feeling of sonic vertigo by playing smeary notes that avoid a tonal center.

One of contemporary jazz’s most prolific composers, on more than 40 albums under his leadership, Douglas has an impressive ability to write songs that meld drama with lyrical melodies. On “Whose Streets” this approach creates an odd serenity that overcomes Bhatia’s fuzzy guitar and leads to an uplifting coda by Douglas and Cain.

In retrospect, we can reflect on the fact that the serenity and optimism won out, but those dark elements remain just below the surface.