Chris Potter: "There Is a Tide"

If history tells us anything about what we’ve all been living through in the past year, it’s safe to predict that millions of words will be written about the lasting effects the pandemic and our various forms of isolation will have on how we live. One of the most thought-provoking observations I’ve heard directly came from the gifted young jazz pianist Christian Sands.

During a conversation last spring about how he was adapting to losing months of work, including a very high-profile residency at the Monterey Jazz Festival, Sands grew reflective. He was practicing every day, he said, and finding that his playing was changing because of the unusual amount of time he was spending at the piano.

“Normally, when you’re on the road, the only time you get to play is when you’re doing a soundcheck or performing,” he said. “You don’t get much time to actually sit and practice, to work things out. I believe, when this pandemic is over, we’re going to hear changes in every musician. No one’s going to sound exactly like they did before this.”

As if going to a crowded music venue or getting together with friends wasn’t enough to look forward to once most of us have a vaccine in our systems—that’s a potent prediction.

Certainly, for those musicians who haven’t been too stressed about their livelihoods to spend a lot of time with their instruments, there has been no shortage of practice or recording time. A number of those musicians have even used their time in isolation to step far outside the way they regularly present themselves to record something completely new.

Chris Potter has gone further outside his norm than most. As a saxophonist, the 50-year-old South Carolina native has had the kind of career path young musicians dream about. A professional from the age of 13, he released his debut recording as a leader in his early 20s, when he was already playing prestigious gigs with the renowned bebop trumpeter Red Rodney. Since then, he’s gone from success to success, leading his own bands and performing with peers like trumpeter Dave Douglas, guitarist Pat Metheny, and bassist Dave Holland.

When the world began to shut down last March, Potter—like a lot of people—found himself sheltering at his parent’s home temporarily. But while many shut-ins were filling their time nurturing sourdough bread starters or shopping online for pets, Potter turned on the bass guitar amplifier he kept in his childhood bedroom and began laying down beats, much the same as he had when he was a teenager. Except now he’s a perennial top vote-getter in several of the reed categories of critics’ polls and one of the most in-demand guest soloists in the world. 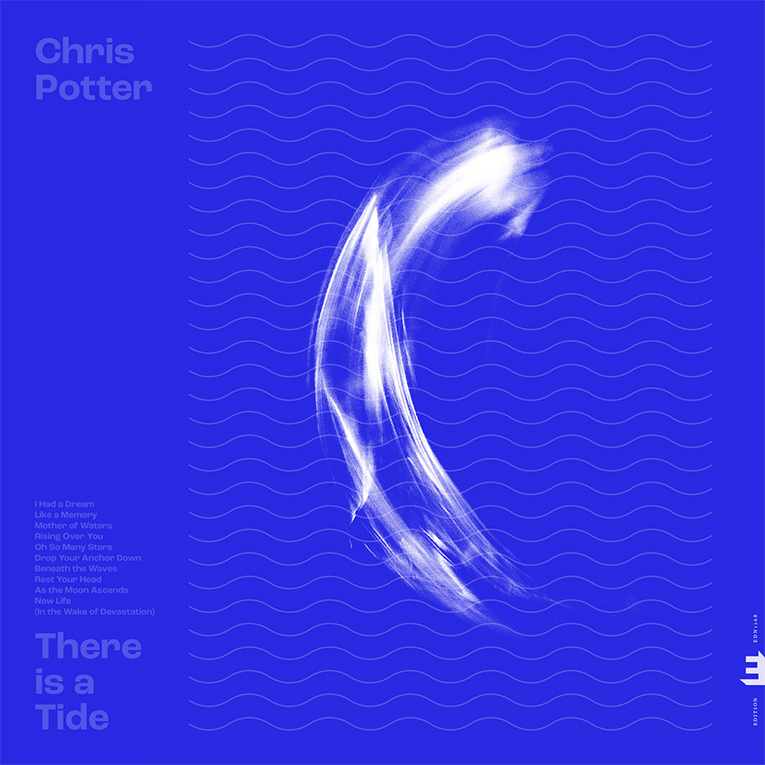 Still, star player or not, songs need structure, so he labored during his time in South Carolina recording basslines and adding drum tracks and keyboards. He let his imagination drift to stress-free ideas, so much of the music he wrote for There Is a Tide summoned images of seascapes and starry skies: ideas reflected in titles like “Mother of Waters,” “Rising over You,” and “As the Moon Ascends.”

When the initial panic surrounding the pandemic lifted, Potter returned north to his home in Brooklyn, where he began fleshing out his basic tracks with layers of saxophones, flute, and guitar. By then, he felt confident that his lockdown project had more potential than most newfound hobbies, so he sent the final product off to Dave Stapleton, who, as the owner of the UK’s Edition Records, validated Potter’s belief in the result.

Despite the calming overtones of the harmonic structures and melodies, the core of much of what he wrote in South Carolina is funk bass. Potter is not Christian McBride, and he doesn’t pretend to be; the lines are simple but sturdy. He’s also wise enough to play to his considerable strengths, as when he opens up a free section at the end of “I Had a Dream” where he can blow without any rhythmic structure, or launches into a blazing soprano solo on “Mother of Waters” that makes you overlook the staid support below it.

Overall, everything seems in its place, as long as you don’t dwell too much on the rudimentary drums and remember that this extraordinarily plangent saxophone is usually heard in the company of the world’s best.

What’s missing is nuance. Hearing Potter play a simple drum fill makes you realize how much a player like Nasheet Waits or Eric Harland adds in terms of dynamics and touch. When you don’t specialize in an instrument, the tendency is to hit the notes dead on, and to play strictly in time. So Potter’s rhythm section sounds pretty conservative, as if he were the featured soloist with some very competent high school students or college freshmen. What’s missing beyond nuance is interplay; his approach to building the songs doesn’t allow for it. As a result, there are no surprises—no unexpected cymbal strike as Harland might drop in, or chordal swells from the guitarist.

But Potter is one of the world’s best saxophonists and no slouch as a composer, so while There Is a Tide isn’t going to challenge anything he has recorded with Holland or Harland for overall virtuosity, it’s a very pleasant experience. And considering he made it during the same time that many of us became amateur bakers or managed to master the mute button on Zoom, it’s a pretty impressive recording, which evokes just the right feeling of calm for times like these.