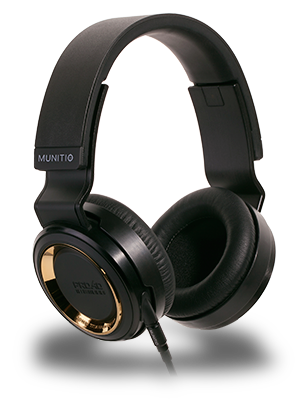 Munitio, based in Woodinville, Washington, is not a company with which I was familiar before beginning this review. Now, having heard their Pro40 headphones, I’ll be tuned in the next time they release something new.

The Pro40s ($299 USD) come inside a hard carrying case, along with a braided microphone/control cable with a 3.5mm miniplug and three buttons, a carabineer, and a quick-start guide and warranty declaration.

The plastic carrying case is one of the best I’ve seen. It’s very solid, and should protect the Pro40s quite well. Inside is a mesh-covered compartment for carrying cables and accessories. It tucks easily under the arm, or could be thrown into a backpack or travel bag, or hung by the carbineer from a belt.

The Pro40s are a fairly standard design with adjustable arms that have minuscule detents: they can be adjusted to fit almost any size head. The earcups swivel slightly, using a technique Munitio calls Coda Axis in-line gimbal technology, to “allow a natural range of motion without disrupting speaker driver performance,” but the headphones do not fold. The Pro40s are nongloss black, except for a raised white logo on each side at the bottom of the headband, and a gold (or silver) ring around the exterior of each earcup. There’s an embossed logo on each earcup, though this is black and doesn’t stand out nearly as much as it does in photos. Markings on the inside of the headband connector indicate the left and right channels. It strikes me that silver might be more effective than gold for the earcup bands. I was sent the gold ones, but the silver ones sure look sleek in the product photos! They also come in all black.

The Pro40s gave a feeling of solid build. The headband is of aircraft-grade aluminum coated in titanium, and is lined with a thin piece of hard foam. The earcups are padded with foam and protein leather. Inside are 40mm titanium drivers, which boast a frequency response of 12Hz-20kHz. 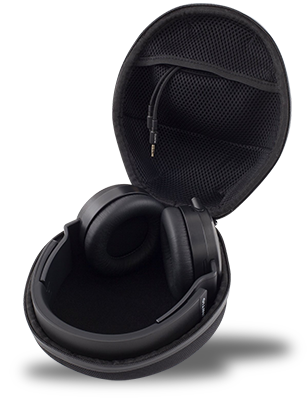 I think that any headphones costing over $100 should have detachable cables, and sure enough, the Pro40s’ cable plugs into a socket in the left earcup. As solidly built as the Pro40s are, no harm is likely to come to them, but cables get a lot of wear and tear. It’s good to know that a broken cable won’t mean having to spend $299 on a new set of ’phones.

The braided cable is about 3’ long and includes a switch to control the actions of Apple equipment; a longer, coiled cable is available free to owners, as is a 1/4” adapter plug (contact Munitio at this page). The coiled cable lacks the iDevice switch. I actually prefer the latter -- I like to adjust headphones using the control functions on my iPod Touch instead of trying to press the tiny pushbuttons and rockers on most inline switches, which seem built for smaller, defter fingers than mine.

The Munitio Pro40s fit securely and comfortably. Having less padding at the top actually seemed to contribute to their stability -- no matter how hard I tried, I couldn’t deliberately dislodge them from my head, yet they were among the most comfortable headphones in their class that I’ve worn. The cable plugs in surely and securely, and the inline switch worked as promised for skipping forward or back and for adjusting the volume. But as I prefer to make those adjustments on the iDevice itself, I used the coiled cord for most of my listening and found it terrific: Exactly the right length when coiled, it never got in my way.

The Pro40s are not noise-canceling ’phones, but I found that they fit securely enough around my ears to create a seal that considerably lowered the volume of extraneous sounds.

As might be expected from their size and Bass Enhancer Chamber, the Pro40s had solid bass that was focused and very much audible, but never overbearing. The midrange was solidly clear, but the upper frequencies seemed a bit tamed -- they were present, but I was more aware of the lows and midrange. To me, that is preferable to drivers that screech-out the highs. The most noticeable thing about the Pro40s’ sound was its warmth, due to the tonal balance just described. But this warmth was often attained at the expense of detail.

“Wheels,” from Cake’s Pressure Chief (16-bit/44.1kHz ALAC, Columbia), has a bass-guitar line with little melodic fills, and these were absolutely clean through the Pro40s. Voices were quite clear, and percussion was somewhat in the background -- except for the occasional struck cymbal, which shimmered most appealingly. The title song of Reckless Kelly’s Wicked Twisted Road (16/44.1 ALAC, Sugar Hill) starts with guitars and voices in the midrange, which sounded fine until the guitar entered its upper range, where it was a tad dull through the Pro40s.

The opening of the Pas de Deux from Tchaikovsky’s The Nutcracker, with Ernest Ansermet conducting the Suisse Romande Orchestra (16/44.1 ALAC, Decca), was serviceable. The plucked bass and harp arpeggios were correctly balanced. The ensuing melody in the cellos had full and rich tone without losing focus. Later in the piece, the violins sounded a bit harsh and the cymbal clashes recessed. The effect, again, was a bit dull, and climaxes sounded somewhat congested. Other classical recordings sounded similar. It’s not that the highs weren’t there -- they were just pushed back by other frequencies. Audiophile reviewers of LPs used to refer to this sort of sound as being “a bit woolly.” I definitely preferred the Pro40s with rock and pop. 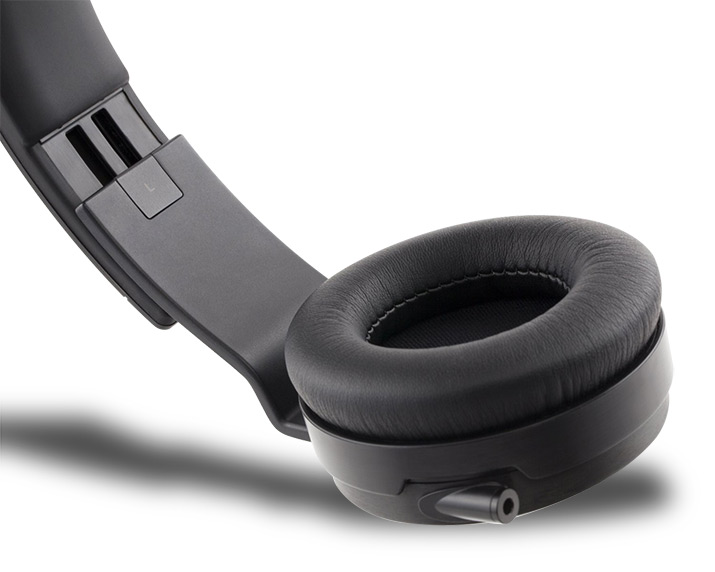 The Munitio Pro40s fall somewhere in the middle of the many commuter headphones I’ve heard the past year. The very best for balanced sound with all types of music were the Polk Audio UltraFocus 8000s ($349.95), with the Logitech UE 9000 wireless ’phones ($399) in second place. The best bargain is JVC’s HA-M55X Xtreme Xplosives ($49.95), a throwaway product only because it’s so inexpensive and has no detachable cable. If you don’t need over-the-ear and can settle for on-ear headphones, the RHA SA950i’s ($59.95) are also a bargain, and produce amazingly clean bass for ’phones so small. All of those models sound crisper and more balanced than the Munitio Pro40s. If, however, you prefer a sound that’s warmer and less detailed, and are looking for a really solid build, a comfortable fit, and bass to burn, the Munitios should suit you just fine.