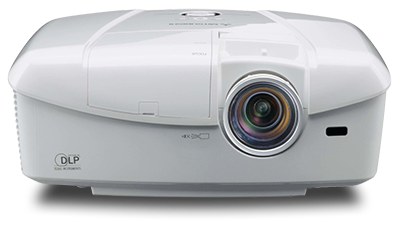 The art of projector design gets swoopier every year, and the HC7900DW is a gorgeous piece of industrial sculpture. Its clean white body, orderly lines, and uncluttered rear end all make for a nice presentation. Granted, it’s missing the Hummer-like seriousness of the Runco D-113d, or the voluptuous curves of a Sim2 Lumis 3D-Solo in Ferrari Red. Still, in person, the HC7900DW is quite attractive.

Inside is a single-chip 1080p DLP device with a light output of 1500 lumens and a contrast ratio of 150,000:1, assisted by an automatic iris. The HC7900DW is a 3D machine, though it doesn’t come with any equipment to watch a 3D movie. I applaud this approach, because lots of folks don’t give a twit about 3D. If you want to use its 3D capabilities, you’ll have to pony up an additional $99 for Mitsubishi’s 3D Emitter. You can buy various brands of glasses, which run $50 to $125/pair. You’ll probably also want to set a few bucks aside for a good universal remote control.

The HC7900DW is gorgeous; its remote control is another matter. It forces one of your fingers into a back indentation, and unless you have Shaq’s hands, you’ll find that the indent works for exactly none of your fingers. It does have a wonderful set of controllable functions relating to the picture. On the other hand, 24 of the 29 buttons are within a gnat’s eyelash of being identically sized, and they’re arranged in perfectly confusing rows and columns. Plus, it’s ridiculously weak. Even with fresh batteries, I had to get within about 12’ of the projector, and even then, it worked only intermittently. Because its signals lacked the strength to reach the projector, we had to use a better, universal remote -- or, more often, walk to the projector to manually turn it on and off.

In 2010, the great designer Niels Diffrient -- inventor of such iconic products as the Princess phone, the Polaroid SX-70 camera, and the Freedom Chair -- gave a speech that was a collection of important thoughts from a genius in the last years of his life. “The difference between us as designers and engineers is that engineers are fundamentally without an aesthetic motive,” he said. “They work out something that functions mechanically or electrically and it’s functional, but they don’t add that extra something that’s poetic, cultural, visually satisfying.” This remote was created by an engineer lacking the aesthetic motive. Thankfully, the HC7900DW itself is the product of a talented designer.

Setup was simple. The Mitsubishi’s menus are deep enough that you can control virtually any parameter, yet the presets offer usable settings. In fact, I used the Cinema mode as often as I used my own settings for sports, regular TV, and films. Around back are one component-video and two HDMI 1.4a inputs. Perhaps I’m alone in this, but it seems to me that a $2499 projector could afford to give us more HDMI inputs. But Mitsubishi isn’t the only maker to skimp on inputs. Almost all projectors have only one or two, and most people simply run all their HDMI outputs to a receiver or processor, then send a single HDMI cable to the projector. Nevertheless, people commonly use projectors as front-firing devices. The HC7900DW’s trim dimensions (16”W x 6”H x 13”D) and the fact that it vents out the sides, not the back, will allow it to be placed in a rack-mount system or on a standard shelf. There’s at least a chance you might want to plug more than two components directly into the projector. I’d like to have the choice.

It was no problem getting the HC7900DW to fill my 110” screen from 14’ away. Its throw range will allow the projector to sit anywhere from 11’ to 16’ away from the screen, and its 1.5:1 zoom lens should provide all the help you need for getting a focused, screen-filling picture. But the zoom, like the vertical shift and focus, is manual, and there’s no horizontal shift. Thank goodness you have to perform the setup only once -- getting the size, vertical shift, and focus all perfect takes steady hands and some time.

The presets are better than usual, offering appropriate penetration into the color and contrast menus. However, when you spend this type of money, you still should consider hiring a certified calibrator to do your fine-tuning. Fortunately, the factory settings are actually useful. The Cinema preset, for example, provided lovely skin tones, while the Game mode looked great with outdoor sports, especially baseball. Contrast was excellent for a DLP. Mitsubishi has figured out how to avoid the dreaded grays and get real, honest blacks. It’s not quite as good as the benchmark JVC projectors, but they start at $3500 -- $1001 more than the HC7900DW.

The HC7900DW’s lamp is claimed to last 3000 hours; a new one costs $349. If you have a totally black room and can live with substantially lower light output, they claim the bulb will last at least 5000 hours. That yields operating costs, bulb-wise, of 17¢/hour for full brightness and 7¢/hour for Eco mode. But I’m glad to pay another dime per hour for a brighter picture.

Sittin’ on a Fence

Mitsubishi claims that their 2D-to-3D conversion is better than most. I agree, but that claim is more an indictment of the industry than a claim of “problem solved.” It was fun to watch some of the NBA playoffs using the conversion. That dude Hibbert is a big man. The problem with Mitsubishi’s conversion, as well as every other company’s, is that, after about 15 minutes, I get tired of it and turn it off. I’m always hopeful, but it never works. Kids might like it with cartoons, where any sense of depth is appreciated, but I can’t imagine an adult using it regularly. The important thing to remember is that you don’t have to use the 2D-to-3D. Leave it for the kids.

Let’s Spend the Night Together

Watching the HC7900DW was always a pleasant experience. Straight out of the box, using the Cinema preset, the picture was gorgeous. I expected to find some problems with the contrast because I’m so used to the JVC projectors’ perfect blacks. In fact, the JVC X70R ($8000) immediately preceded the HC7900DW in our theater. I can’t, hand over heart, claim that the $2499 Mitsubishi had equivalent blacks, but the change never bothered me.

One of the best showcases for any projector’s ability to handle both color and contrast is a well-produced NBA game. The vibrant uniforms, the spectators’ multi-hued clothing, the fiery graphics, the players’ flamboyant pre-game outfits, Craig Sager’s fancy suits -- all just pop off the screen if the camera work is right (that means TNT or ABC). It all looked superb through the HC7900DW. Motion artifacts are an occasional bugaboo with DLP projectors, but I never saw a single instance on the Mitsubishi. 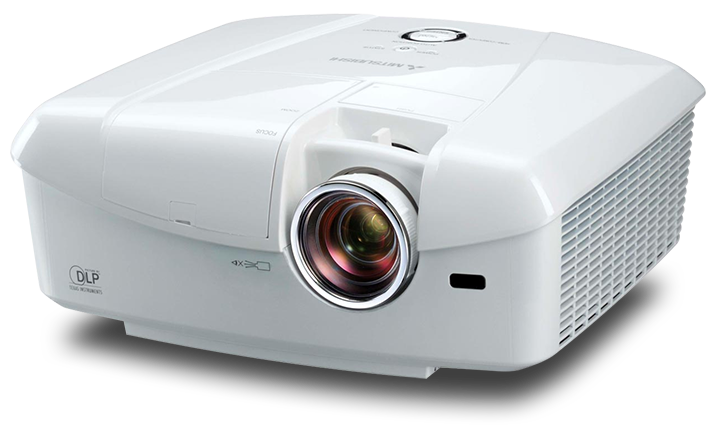 Well-transferred films worked impeccably as well. Despite being released on DVD, not Blu-ray, Naïve’s film of a concert performance of Stravinsky’s Le Sacre du Printemps, performed by the Orchestre National du Capitole de Toulouse, led by Tugan Sokhiev (V5192), added dramatic forcefulness to the smashing recording. Director Jean-Pierre Loisil must know the score by heart -- his cuts are precise and timely, almost breathless. It’s the best classical-music video I’ve seen so far this year. Ang Lee’s The Life of Pi was shot using the fantastic Arri Alexa system, a 2880x2160 Super 35-sized sensor that offers a 300% increase in pixels over 1920x1080. The clarity was shocking. The Blu-ray edition also lets you compare the 3D and 2D versions, which is instructive.

3D is still in its infancy. If it makes it to adulthood without being abandoned, I have hopes that intelligent directors will come up with worthy reasons to use it other than mayhem and chaos. So when I say that the HC7900DW’s 3D performance was pretty good, it has more to do with the medium than with Mitsubishi. Their 3D is good, especially if you have a completely dark room and a smaller screen. On my 110” screen, it was just a little dim. That could be said for almost any brand of 3D projector.

Overall, the Mitsubishi HC7900DW did a splendid job of getting the signal onto the screen. If you have a smaller screen, say 90” or less, and a dark room, I think anyone would love its picture.

A minor annoyance: Mitsubishi claims that the HC7900DW is “whisper quiet”: 23dB in Eco mode. Well, if you have the bulb at lower brightness and aren’t running a bright scene, then maybe it is sort of quiet. With normal use, it’s pretty loud. That doesn’t bother me, because I used it as a rear-projector in a separate room. But if you’re going to have it right next to your sitting area, you might want to listen to its sound level at full brightness to make sure it’s not too loud for you.

Salt of the Earth

The Mitsubishi HC7900DW is awkwardly priced -- many cheaper projectors put out a brighter picture. Yet to outperform the HC7900DW in every way would cost substantially more than $2499. Projectors in the $1500-$2500 range from BenQ, Epson, Optoma, and Panasonic are competitive but not necessarily better. Each has its strengths. Once the price rises to $3500, you can get better projectors from JVC and Sony, but $1001 will buy a lot of popcorn. If $2499 is your target price, and you have a dark room and a screen smaller than 100”, the HC7900DW should be on your list.

PS: Apologies to the Glimmer Twins for the subheads. They provided the soundtrack for the writing of this review.