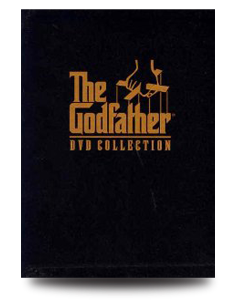 Tragedy: Form of drama that depicts the suffering of a heroic individual who is often overcome by the very obstacles he is struggling to remove. The protagonist may be brought low by a character flaw or, as Hegel stated, caught in a "collision of equally justified ethical aims." (The Columbia Encyclopedia, Sixth Edition, 2001)

The Godfather movies have become a part of our shared mythology, a power that few films can claim. How easy is it to picture Marlon Brando as Vito Corleone, sitting in a dark room, dispensing courtesy and carnage based on his own reading of situational ethics? It’s easy to visualize Al Pacino as Michael Corleone, emotionally struggling with self-created demons and a desire to go legit as he coolly orders the death of some foe, or John Marley, as Jack Woltz, waking up with a (real, by the way) horse’s head in his bed? 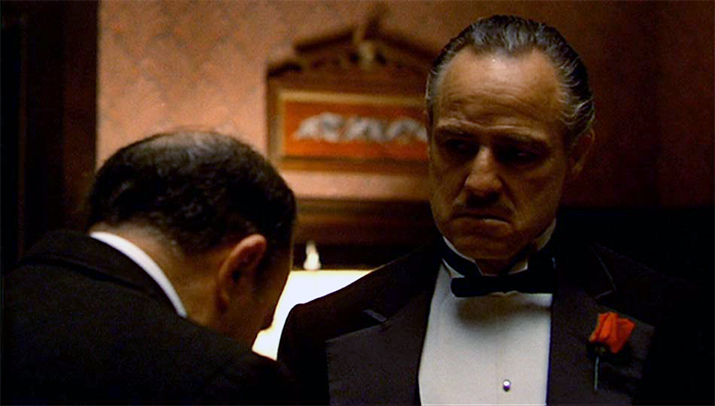 Think of the unforgettable quotes. De Niro, Brando and Pacino, the three Godfathers, all stating, "I'll make him an offer he can't refuse." As Sonny opens a bulletproof vest and finds a dead fish, he says, "It's a Sicilian message. It means Luca Brasi sleeps with the fishes." These are so ingrained in our collective unconscious that many don’t even know where they originated. So I’m going to jettison my normal retelling of the plot. We all know it. And anyway, the movies are not about plot. They are about fate, family, and misguided honor. They are about visual texture, characters, and the human condition. Like the greatest of grand operas, these films reach out to us through shared experiences like love and family, and then thrust us into a tragedy that ultimately teaches us about the wages of sin.

The subtext of all three films is family. By sharing something as universal as the desire to protect and provide for your family, Coppola draws us into identifying with the Corleones. The first generation, Vito (De Niro, then Brando) and Mama Corleone (Francesca De Sapio, then jazz singer Morgana King) care intensely for their family. Mama stays out of the details of the family business and acts as a good matriarch. By the next generation, Michael (Pacino) and Kay (Diane Keaton, in her first major film and pre-Woody Allen), have a different relationship, one based on knowledge and partnership, something both have ambivalent feelings about. After Michael explains to her about Luca Brasi threatening to murder a record producer, Kay recoils. He explains, "That's my family, Kay. It's not me." He goes on, "My father is no different than any powerful man, any man with power, like a president or senator." She looks at him as though he’s crazy. "Do you know how naive you sound, Michael? Presidents and senators don't have men killed!" He looks into her eyes. "Oh. Who's being naive, Kay?" 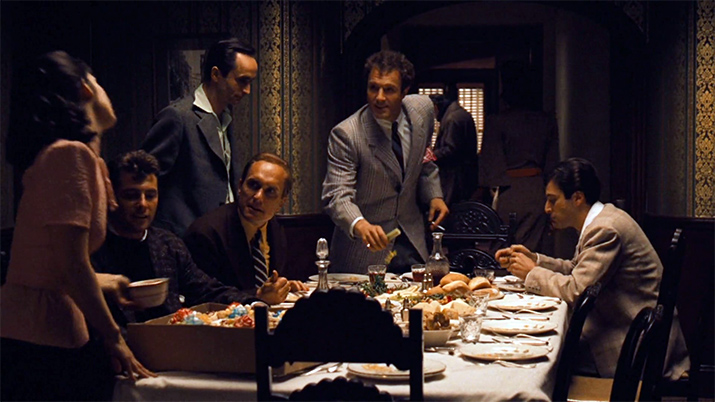 By the second film, we see rancor setting in and the relationship unraveling. Kay is beginning to see that she can’t just ignore the family business. She says, "It made me think of what you once told me: ‘In five years the Corleone family will be completely legitimate.’ That was seven years ago." Michael, clearly frustrated with himself, discloses, "I know. I'm trying, darling." You can clearly see the pain of a man who has abandoned all of his youthful dreams. By the third film, Kay is gone; Michael is withered and wants out. Another archetypal line is given: "Just when I thought that I was out they pull me back in." This is a tragedy of Shakespearean proportion, something you can be sure Puzo and Coppola had in mind. Shakespeare loved to see characters hoist on the petard of their hubris, and Michael Corleone is the poster boy for such retribution. But how did Coppola and Puzo make us care?

Even if Vito had simply owned an olive-oil importing business, a successful one with loyal customers, most of the family dynamic of The Godfather could still exist. Michael’s need to love and honor his pop, his need to care for the family business the way Vito had, his troubled decisions and their sad outcomes are still key issues. But no one would have come to see the film, and those who did wouldn’t have cared. Instead, they gave us an open window into the secret lives of gangsters. And then we get to imagine how the other half lives. How do they deal with brothers that fight? How do they win their parents' affection? What do they tell their spouses when work starts affecting the home? What does a brother do to protect his sister from an abusive relationship? Capisce?

Coppola didn’t do it by himself. The ensemble cast is uniformly superb and at the top of their game. Which of the actors have done better work since? Certainly not Brando, a man at the absolute apex of his craft that crashed and burned thereafter. Caan? Cazale? Garcia? Shire? Maybe there is a case for Pacino (Scent of a Woman), certainly De Niro (Taxi Driver, Raging Bull, Goodfellas), Keaton (Annie Hall) and Duvall (The Great Santini, The Apostle, Tender Mercies). But what a spectacular cast. How did Coppola coax such vivid performances from all of them? 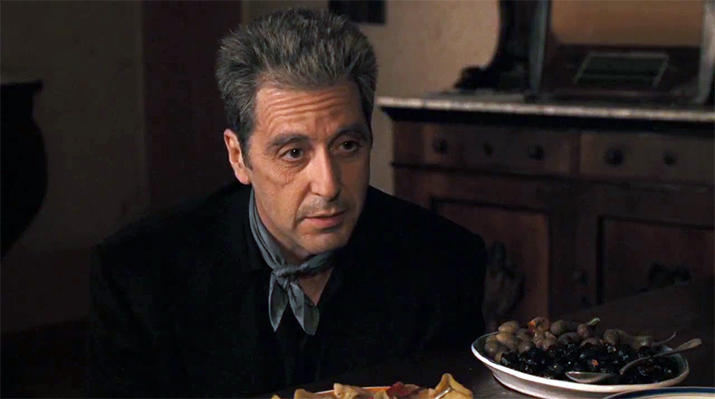 The answer lies in the superb extra disc that comes with the set. For an hour, we eavesdrop while the cast reminisces about the films. Archival footage and screen tests are a veritable feast for "Godfatherholics." Younger viewers may not remember that these were mostly unknown actors. Duvall tells the story of how Coppola talked him, Pacino, and Caan into coming up to San Francisco to do some 8mm tests, all for the price of a pastrami sandwich. They were poor, unknown, and desperate to work. Coppola talks about the importance of family and how he tried to make the cast and crew into an extended family. He lets us in on why he used his sister, Talia Shire, his father, Carmine, and his daughter, Sofia (who was in all three films).

Of utmost interest is the interview with cinematographer Gordon Willis (Annie Hall, Manhattan, Pennies from Heaven), a genius with natural lighting and subdued colors. Watch again the opening scene of the first film and imagine the difficulty of photographing in that light. Willis is something of an iconoclast, filming mostly outside Hollywood and garnering few kudos from his peers. He probably scares them. He’s that good.

Paramount deserves our esteem for the superb packaging and stellar extras. Each film comes with a running commentary by Coppola, one aimed at movie fans as opposed to film geeks or pros. Lots of trivia and interesting sidelights are included. We are also left with the distinct impression that he still hurts over the treatment he received from Paramount during filming. There is also Coppola’s fascinating notebook (which he carefully walks us through), a discussion with his father about the music and with Puzo about the stories, several documentaries, additional scenes, trailers, and outtakes.

Despite all these wonderful extras, there is one big warning. Don’t watch them until you have watched and digested the three films. The reminiscences of the crew are bittersweet with some nice memories and some unpleasant ones, especially from Coppola and Pacino, both of which were under constant threat of being fired. Sometimes it’s better to not look under the covers before you crawl into bed with someone -- at least until you know them and appreciate them for their intrinsic nature. The reality may hamper the magic. Ditto the Godfathers. If I had my way, I’d make people prove they had experienced the magic of the movies before seeing the extras.

Paramount should have lavished the attention on the mastering of the films. Low-level and dark details are obscured in the compression. During the first film, I turned up the sharpness control on the PLUS Piano projector to full. For every other film I own, I leave it at the lowest setting. The film is simply dull. The next two fare better, but they are nowhere near what is possible. For example, Citizen Kane, a much older film with worse stock, looks sharper and better. Come on, Paramount. This is one of your crown jewels. What are you thinking? Few films in history have lavished as much effort on making us feel we are there in an historic period. Everything from the clothes to the cars, from the furniture to the food is perfect in its detail. Let us see it!