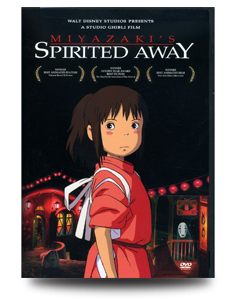 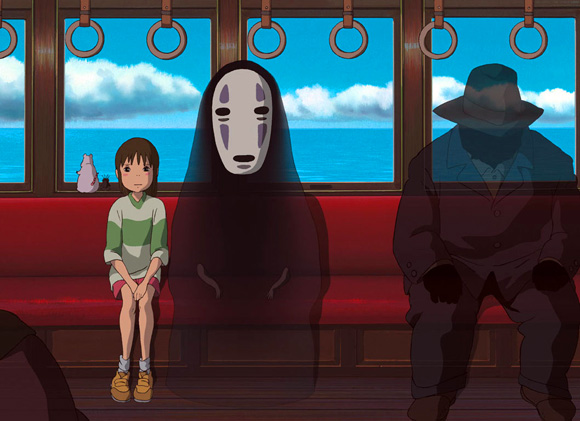 All great children’s stories have an undercurrent of sadness, whether that sadness is felt by the tree in Shel Silverstein’s The Giving Tree, by Dorothy as she longs for a better home somewhere over the rainbow in L. Frank Baum’s The Wonderful Wizard of Oz, or by Max, the King of All Wild Things, whose anger ultimately evaporates into homesickness in Maurice Sendak’s Where the Wild Things Are.

The works that most resonate with our noblest urges feature protagonists reminiscent of ourselves who, when faced with the sting of life’s vicissitudes, reveal strength of character rather than bitterness, and learn wisdom instead of ill will. In the case of children’s stories, the storyteller gives the fictional protagonist exactly what the child reader wants -- independence from strict parents -- then tells the story of the consequences of their choices and actions. These characters’ nobility arises from how they react to those consequences.

Chihiro, brilliantly voiced by Daveigh Chase on the English soundtrack of Spirited Away, is a perfect example. Miyazaki: "I tried as much as possible to make the main character an everyday person. So her face is not particularly beautiful. She was not cute or appealing." In fact, Chihiro is a little girl whose family is moving house. She will leave all her friends behind, and she’s not happy about it. On the drive to their new home, the family stops at a cave; as they walk through it, they find what they think is an abandoned amusement park. It even has free food, and as her parents gorge themselves, Chihiro wanders farther into the park. There, she meets a spirit who warns her of the dangers of this place for her and her family. 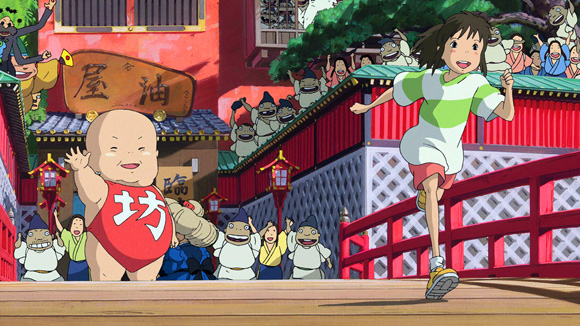 Chihiro runs back to warn her parents, but they have been transformed into pigs who continue to gobble up everything in sight. She returns to the park, where she discovers that life can be very strange indeed: She has magically entered a spa for the gods. She also learns that gods and spirits can be duplicitous, dangerous, and utterly unpredictable. One of them, piece by piece, is even stealing her soul. She must save herself and her parents, but has no idea whom she can trust.

One of the beauties of animation is that animators can create entities that are otherwise impossible -- the only limit is that of the imagination. Miyazaki is so venerated because, as a creative force, he is unmatched. Miyazaki’s attention to detail is peerless, as in the time-consuming work around the edges of the image below. The sheer beauty of these frames, each a separate, hand-drawn work of art, shows why so many animators and comic artists pay tribute to him. His ability to juxtapose eye-catching, perilously bizarre art with beings that exist within their own weird, internal logic has had far-reaching impact.

One of Miyazaki’s most ardent admirers is Pixar’s John Lasseter, director of Cars, Toy Story, Toy Story 2, and A Bug’s Life, and producer of Ratatouille, WALL-E, and Up. "At Pixar, when we have a problem and we can’t seem to solve it, we often take . . . one of Mr. Miyazaki’s films and look at a scene in our screening room for a shot of inspiration. And it always works! We come away amazed and inspired. Toy Story owes a huge debt of gratitude to the films of Mr. Miyazaki."

In 1998, the following posting showed up on the Miyazaki Discussion Group: "Hi: My name’s Guillermo del Toro, I’m a filmmaker. My films CRONOS and MIMIC have been in wide release in the USA and CANADA (recently started opening in Europe and Asia). I’m an absolute addict to ANY Miyazaki movie I’ve seen. I am eternally grateful for your site and would love to be able to get a GHIBLI LD box set [a 13-laserdisc set of early Miyazaki]. Any ideas? It seems to be out of print . . . I’m desperate for it. Please E-mail any suggestions. Thanks a lot!!!" Eleven years later, Guillermo del Toro’s résumé as writer and/or director includes such films as Hellboy, Pan’s Labyrinth, and The Hobbit. 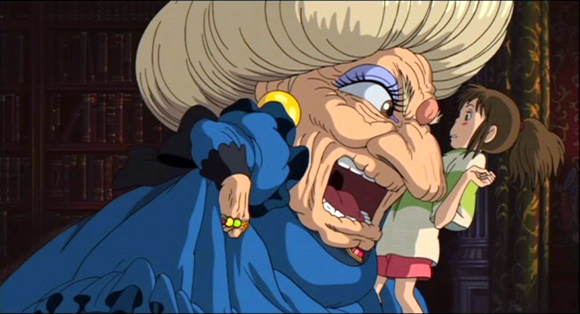 I’ve spent so much of this article lauding Miyazaki’s work because many people are adverse to animation in general, and/or to animé in particular. Hopefully, that didn’t stop them from enjoyingWALL-E, a film that should have been nominated for last year’s Best Picture Oscar -- or another Pixar feature, Up, which, I am confident, will be nominated for this year’s. Spirited Away won the Oscar for Best Animated Feature in 2003. It should have won for Best Picture. Instead, Chicago took that prize. Fifty years from now, Spirited Away will still be loved all over the world, while Chicago will likely be little more than a footnote.

So far, Disney has released Spirited Away only on DVD, not Blu-ray. But they’ve done a job that pays respect to what they believe to be one of the classics of animation. And because, with Snow White and the Seven Dwarfs in 1937, Disney actually invented feature-length cel animation, their opinion should count. Besides the film itself, which has been beautifully transferred, there are six bonus features. The first is a heartwarming introduction by John Lasseter, in which he offers tribute to Miyazaki. Another focuses on the art, frame by frame, and explains its importance in the world of animation. The most fascinating bonus allows the viewer to use the angle button in a few scenes to switch between the feature and Miyazaki’s storyboards. There’s also a Japanese TV special about the making of Spirited Away, and the Japanese trailers. Only the feature about the English-language voice talent is boring.

I’ve been writing this column for just under a decade, and Spirited Away is the most recent film I’ve covered. To judge whether or not a film is a genuine classic, some time needs to elapse before we can begin to be sure of its lasting qualities. It’s far easier to pick a film with staying power from the 1930s than from the 2000s.

That said, I have no qualms, only eight years after its release, about dubbing Spirited Away a modern masterpiece. Unfortunately, the film has to beat its way past audience prejudices regarding animation as a serious art form, let alone animé. If that describes you, don’t let it get in the way of experiencing this glorious film. I promise you won’t be disappointed.