Take every story of wild rock stars, rockabilly cats, and legendary jazz over-indulgers, and set them all aside. No one -- not Keith Moon, Jerry Lee Lewis, or Charlie Parker -- could hold a candle to pianist James Booker for combining outrageous behavior and audacious musicianship.

Born in late 1939 in New Orleans, but raised by well-to-do relatives on the Mississippi Gulf Coast, Booker was the son of two Baptist ministers who were also pianists in their respective churches. Whether through the influence of his parents or deep native talent, young Booker could memorize classical piano works as a child and was skilled enough to have his first regional hit recording, “Doing the Ham Bone,” at the age of 14. By then, however, he had already been in and out of trouble with authorities and was well on his way to developing the heroin habit that would define -- and eventually shorten -- his life. At nine, he was struck by an ambulance on a New Orleans street, and he later traced his addiction to being prescribed morphine during his subsequent hospitalization. His other life-defining accident -- the loss of his left eye -- remains a mystery. Over the years, he variously blamed violent New Orleans record producers, fellow inmates at the notorious Angola State Prison, and even bandleader Ringo Starr for the injury. The latter, he said, explained why he wore an eye patch emblazoned with a silver star.

Relocated to his hometown by the mid-’40s, Booker toured with artists like Joe Tex and Earl King while still in high school, and in his senior year hit the road masquerading as the older pianist Huey “Piano” Smith, who had an aversion to travel. Stranded in Houston during another tour, he struck up a relationship with producers at Duke/Peacock Records, among them Malcolm Rebennack (aka Dr. John), who recorded him in support of Junior Parker and Bobby “Blue” Bland.

His burgeoning career was further advanced when he caught the ear of the renowned Polish piano virtuoso Arthur Rubinstein in 1958. “I could never play like that; not at that tempo,” Rubinstein told the New Orleans-based Times-Picayune.

Oddly, for the time, Booker didn’t immediately toss his education aside for a music career. Instead, he enrolled at Southern University as a music major, but the bizarre side of his personality was beginning to show itself, no insignificant fact considering the New Orleans music scene was known for outrageous characters like Henry Byrd (aka Professor Longhair) and Rebennack. Even in comparison to them, Booker stood out.

In 1960, he scored his only national hit -- “Gonzo,” which reached No. 43 on Billboard’s pop music chart and No. 3 on the magazine’s R&B chart. While he continued to record under his own name, his career in the ’60s was more focused on being an instrumentalist sideman -- touring and recording with Aretha Franklin, Wilson Pickett, B.B. King, and Freddie King. But in 1967, Booker lost both his mother and sister in rapid succession, events his friend Charles Neville said exacerbated the pianist’s mental decline. In 1970, Booker was arrested for heroin possession and sentenced to Angola, which seemed to be a pivotal point in his life. Despite a few successes, the next dozen years would increasingly lead downhill.

Ironically, his stint in prison and other run-ins with the law led to the most significant part of Booker’s legacy: his relationship with budding pianist Harry Connick Jr. Connick’s mother was a New Orleans judge and his father the city’s district attorney, and they recognized that Booker could be an important teacher for their son, who was already demonstrating his musical talent by the age of five. While the younger Connick grew to be the antithesis of Booker -- white, privileged, a mainstream style leader and leading-man film star -- his style of playing and his connection to the roots of Creole, Cajun, and black New Orleans music owe much to their relationship. Years after Booker’s death, in 1983, Connick would comment that Booker’s music was the hardest he had ever played. 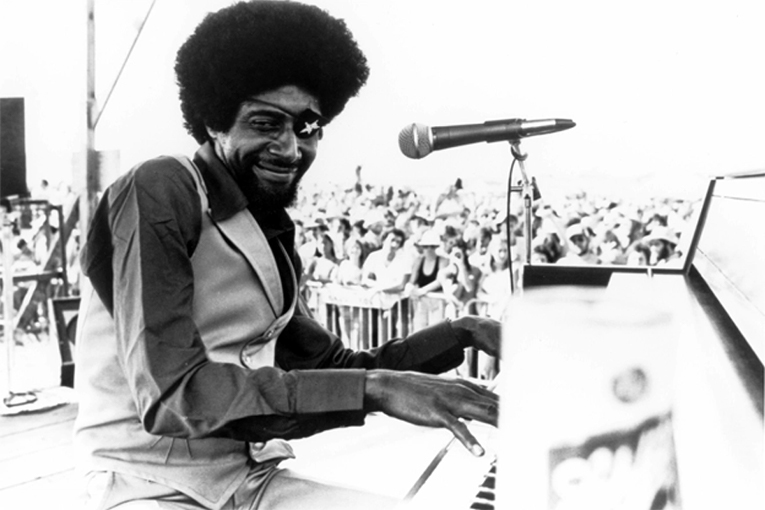 By the time he began tutoring Connick, Booker had landed what would be the highest-profile gigs of his life, playing organ in Rebennack’s band, and recording with the Doobie Brothers, Labelle, Maria Muldaur, Jerry Garcia, and Starr on a string of hit albums. The mid-’70s also saw him find a receptive audience in Europe, in spite of increasingly erratic behavior, and land his only major recording contract, which resulted in the release of Junco Partner on Hannibal Records in 1976.

Despite his European success, which resulted in a number of live recordings, and his recognition by members of rock music royalty like Starr and Garcia, 1978 found Booker down on his luck back in New Orleans. He landed a four-year gig as the house pianist at the Maple Leaf Bar in the city’s Carrollton district, but his drinking and drug consumption were out of control. One night, he appeared onstage at Tipitina’s -- another uptown New Orleans venue -- wearing only a diaper. From the diaper he produced a .357 Magnum pistol. Pointing the gun at his head, he announced: “If somebody doesn’t give me some cocaine right now, I’m going to fucking pull the trigger.”

On other occasions, he would stick syringes between the piano keys or vomit onstage. Friends urged him to seek help, but just as many club owners enabled his self-destructiveness by supplying him with the drugs and alcohol that would keep him playing. Eventually, on November 8, 1983, the string ran out. He had managed to get himself to the New Orleans Charity Hospital, where he had been born 43 years earlier, but he died while seated in the emergency room. An autopsy showed that he died of chronic renal failure brought on by alcohol and heroin abuse.

A little more than a year before his death, in mid-October 1982, Booker entered a studio to record just his third full-length album. Over the course of four hours, he recorded a dozen songs in the company of New Orleans veterans Alvin “Red” Tyler, tenor saxophone; James Singleton, bass; and Johnny Vidacovich, drums. 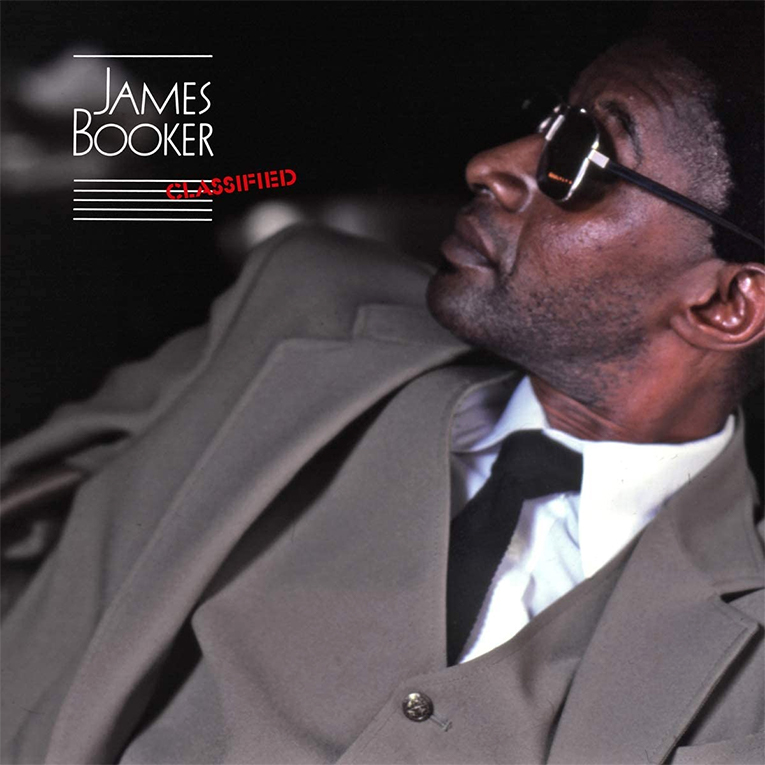 Like most things in Booker’s life, the tale of Classified is anything but straightforward. It took two days for producers Scott Billington and John Parsons to coax any music out of the performer, and when he finally consented to play, the music poured out of him: original pieces, hits by others like “Hound Dog” and “Lawdy Miss Clawdy,” a version of Roger Miller’s “King of the Road,” and a self-reverential medley penned by Professor Longhair. The original LP, on Rounder Records, barely caused a ripple when it was released, much like Booker’s death, and it was discontinued at some point before the millennium. In 2013, at the peak of the digital reissue boom, Rounder released an expanded version of the session, which featured some even odder selections like an interpretation of the theme from The Godfather, along with some photos and notes that paid respect to Booker’s influence on the Louisiana tradition.

Now, Craft Recordings has reissued the original LP, on heavy vinyl, using the remixes that were created in 2013. A special “taupe splatter” version of the LP will also be released in limited quantities in mid-August as part of Rounder’s 50th-anniversary celebration. From the cover photo, it’s possible to guess that the label was aiming to buff Booker’s image somewhat; there are no signs of his star-studded eye patch, no Dirty Harry-style diaper, no Afro wig to hide his weed stash (something he wore in Europe during the ’70s). Instead, he’s shown dressed in stylish shades and a tan three-piece suit and a tie.

Despite the polished cover image and the studio setting, there is nothing slick about Classified. Booker is loose -- and, presumably, well lubricated -- and the band seems to wander in and out without much logic regarding which songs need accompaniment.

Wisely, the producers sequenced the recording to begin with a solo version of Titus Turner’s “Grits Ain’t Groceries,” renamed here as “All Around the World.” It’s an ideal demonstration of Booker’s rolling style of piano, and his vocal is charmingly sly, if limited in pitch. A band performance of Fats Domino’s “One for the Highway” follows, with a woozy tenor solo but solid rhythm-section work. The lyrics -- which are related to a blues standard known by various titles, but probably best recognized as Blind Willie McTell’s “Dyin’ Crapshooter’s Blues” -- are eerie, given Booker’s downward spiral, but it shows that everything he played was done with humor. Likewise, the thematically related “King of the Road,” sounds like Booker is celebrating his lifestyle, and his yodeled vocal tops Roger Miller’s wackiness; no small feat.

The brief “Madame X,” credited to James C. Skinner, is actually Frank Skinner’s title song to a Lana Turner noir film. Alternately titled “Swedish Rhapsody” by Booker, it displays his love of light classical themes and his ability to straddle European harmony and the rococo ornamentation of much of New Orleans piano music. Even better is the album’s title song, a Booker original, which puts his virtuosity on full display, and shows the links between the New Orleans piano music that flourished in the city’s brothels in the early 1900s and the rocking music it became in the hands of people like Smith, Domino, and Booker. 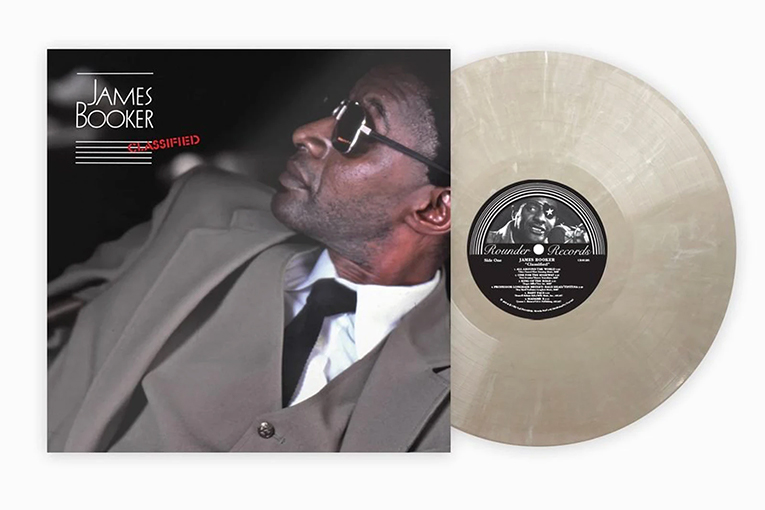 Booker’s music lives on in the work of Connick and others he influenced directly, and his legacy received an enormous boost in 2013 when filmmaker Lily Keber released a documentary called Bayou Maharajah, but his impact on the music scene was never summarized more succinctly than by Rebennack’s comment that Booker was “the best black, gay, one-eyed junkie piano genius New Orleans has ever produced.”