Released only in Japan as a three-LP set in 1974, as an import Lotus became a popular staple on campus FM radio stations -- for its exclusivity, its superior quadraphonic CBS SQ matrix sound, and its long, jazz-based jams. It was Santana’s equivalent to the Allman Brothers Band’s At Fillmore East and the Grateful Dead’s Europe ’72. Recorded live in Osaka on July 3 and 4, 1973, Lotus included extended versions of compositions from Santana’s four studio albums to that point, as well as numbers that would appear on Welcome, the 1973 album that would announce firmly that the band was now more jazz- than rock-oriented.

In his highly introspective autobiography, The Universal Tone: Bringing My Story To Light, Carlos Santana writes about a definitive meeting in 1972 with then-Columbia Records head Clive Davis, when the guitarist and bandleader took a firm stand against “going back” to the band’s Latin-rock roots, which had taken it to stardom with its second album, Abraxas, and its appearance in the film Woodstock.

Despite the lack of a single on the band’s fourth album, Caravanserai, Santana stuck to his guns and refused to return to the studio to record something that would be more commercial in Davis’s eyes. In retrospect, Santana wrote that what mattered most to him was the response his new music received from his peers rather than how many times it was played on mainstream radio.

Even given the times -- when jazz-rock fusion bands like John McLaughlin’s Mahavishnu Orchestra, Chick Corea’s Return To Forever, and Weather Report were in their ascendancy -- Santana’s move toward longer, more open-ended musical forms was unusual for someone who had scored a couple of hit songs. Most artists move toward the popular middle ground, or continue to work that ground once they’ve found triumph there. But after three years of rapidly increasing success, which was the culmination of a long scuffle that carried young Carlos from Mexico to San Francisco, the guitarist was ready for a change.

Although Santana had come from a blues foundation, he was drawn strongly to the music of Miles Davis and John Coltrane, thanks to the insistence of drummer Michael Shrieve. While he wasn’t an instrumental virtuoso, Santana recognized that he had a sound, a signature voice. Although he could not escape the limitations of the chromatic scale to any great degree, the tone of his guitar was immediately identifiable -- no small achievement, especially at a time when his rivals were tonal masters like Jimmy Page, Jeff Beck, Eric Clapton, Dickey Betts, and Jerry Garcia.

On what is arguably the early Santana band’s musical peak -- its third studio album, released in 1971 -- Carlos had found an ideal partner in the young Neal Schon. Just 15, Schon allowed Carlos to focus more on tonal projection, rather than having to carry the entire weight of both lead and rhythm guitar parts. But Schon’s tenure with Santana was relatively short, and by 1973 he and Santana co-founder Gregg Rolie had left to start Journey and Carlos was back on his own. He compensated by handing a much bigger role to keyboardists Tom Coster and Richard Kermode.

Another challenge that the breakup of the original Santana band posed was the loss of a strong, distinctive lead vocalist. Rolie had handled most of the singing on the band’s first three albums, and his departure left a big void. Although the band had demonstrated a desire to shift the balance of its repertoire toward more instrumental pieces, the reality was that audiences still expected to hear hits like “Black Magic Woman” and “Evil Ways.” As Santana notes in his autobiography, some audience members interrupted the quieter moments on the band’s 1972 tour to make their displeasure known. So he knew he had to make concessions, but only within limits.

In what was the single largest indication of the bandleader’s desire to become more focused on jazz, Leon Thomas was hired as lead vocalist. A native of East St. Louis, Thomas had cut his teeth as the singer with Count Basie’s band in the ’60s, but what set him apart was his attraction to Coltrane’s music. On Pharoah Sanders’s album Karma and his own recordings, Thomas utilized yodeling to approximate Coltrane’s sound, but that somewhat gimmicky technique tended to obscure what was a huge, lusty, tenor voice. In many ways, he was the ideal singer for an electric band with multiple percussionists, and he certainly leant some jazz cred to Santana’s desire for his group to be more than just another rock band. 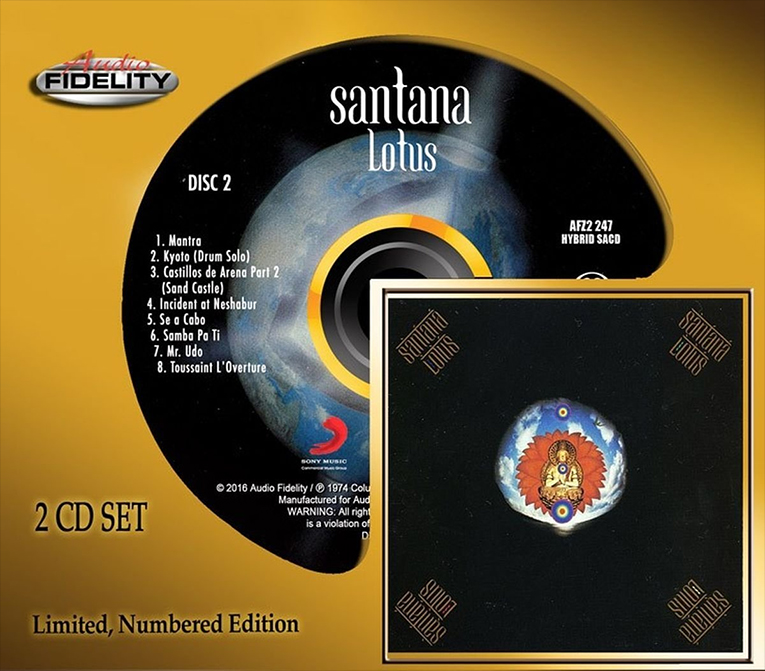 By the time the octet hit the stage in Osaka, they had been on the road for months, playing more than 50 shows since the previous year. Along with Santana, Thomas, Coster, and Kermode, the lineup included bassist Doug Rauch, percussionist Armando Peraza, and charter members Shrieve and José Areas. In his book, Santana compares Coster to Keith Jarrett, while Kermode, he wrote, was more akin to Corea.

The guitarist’s allusion to Jarrett and Corea shows that he had been listening to Miles Davis’s recent band, which featured both keyboardists in an unusual combination. While Davis’s arrangements had Corea playing a highly modulated Fender Rhodes while Jarrett was free to improvise on a second electric piano, in Santana the dominant sound was electric organ. The full, rich throb of Coster’s Hammond B-3 provided a huge wave of sound for Carlos to surf on, and the guitarist’s tone -- particularly vibrant on this recording -- cuts through like a sabre.

This was the early ’70s, however, so electronic sound effects were in vogue with projects like this, and to 2017 ears, there is a measure too much “phasers on stun” synth work.

Another minor quibble is with the way the rhythm section transitions between songs. Since Areas, Peraza, and Shrieve were all Santana veterans by this point, it would seem to be an issue with these particular performances rather than the arrangements, but the problem may also lie in the fact that everyone except Rauch plays percussion at some point. That can lead to some awkward clashes.

But, indeed, those are quibbles, because when the band catches fire, as it does on the second part of Corea’s “Castillos de Arena,” it sounds sublime. In fact, the 30-minute segment that begins there and leads through “Incident at Neshabur,” “Se a Cabo,” and “Samba Pa Ti” may be the best half hour of music Santana ever recorded. Throughout this section, the band plays with the fire, grace, and imagination of any band of that era, including the transcendent original Allman Brothers led by Duane Allman. Carlos sounds like he has truly moved into the mindspace of Coltrane and Jimi Hendrix, and his liberal quotes from Coltrane standards “My Favorite Things” and “Afro-Blue,” along with the Beatles’ “Fool on the Hill,” illustrate how far he has stepped outside the territory he occupied in his earlier career.

The sound on this Audio Fidelity reissue restores the astounding separation of the original vinyl, and the SACD remastering by Steve Hoffman and Stephen Marsh makes the percussion pop like never before. Carlos’s guitar has never sounded better, and added to the fire he brings to this performance, his tone cements this recording’s place as the pinnacle of this band’s history.