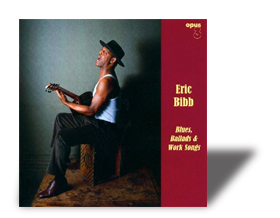 Singer Eric Bibb has been in recording studios for almost three decades. While living in Sweden he recorded Rainbow People (1977) for the Opus 3 label, a recording that got him noticed (remastered twice by Opus 3 in SACD and vinyl editions). Bibb has since recorded for several labels, notably EarthBeat and Telarc, but he always seems to come back home to Opus 3. In 2005 it was for Just Like Love, and at 60 he's once again returned for the stellar Blues, Ballads & Work Songs.

In a preface to the album's notes, he writes that the songs he picked for the disc are mostly tunes that he heard as a child. Also in the notes are short introductions to each track that reveal which singers influenced his arrangements. For the last four cuts of the 14-track disc, Bibb turns to his own music. The first ten tracks feature just Bibb and his guitar, while the last four include other musicians.

Bibb is an aristocratic performer of folk music and blues -- don't expect to hear histrionics or drama in his singing or playing. He elevates folk and blues titles to the level of art song. That's not to say Bibb drains these songs of feeling or humor; it's just that he places expression inside a neat frame, allowing his listeners to focus on the lyrics and meaning of every tune. Many of the songs will be familiar in other guises -- "Stagger Lee," "John Henry," "Take This Hammer," "Cocaine Blues," "Candy Man," and "Frankie & Albert," with the latter having a happier ending than many give it. Well, for Frankie that is. Albert still gets shot dead. After all, "he was her man, done her wrong."

Of Bibb's own compositions, I was especially taken with "Sophisticated Shade," about a Panama hat found in Santa Fe: ". . . the finest hat that I ever did saw -- five thousand dollars of sophisticated shade." For this whimsical song, Bibb adds mandola and sousaphone to his own guitar and vocals.

The recording is awesome in its simplicity, with perfect engineering from Jan-Eric Persson, Opus 3's head honcho. It presents Bibb front and center, sounding perfectly natural and unexaggerated. Throughout the record he uses a number of guitars, which he denotes in each track's written introduction, and the recording is so clean that you can easily hear the differences between instruments.

This is an album to play when you're in a restful or contemplative mood, so you can appreciate its whimsy and refined folk singing. It streets on October 18, 2011, and since it's a hybrid SACD, it will play on all CD (or DVD) players. The record is worth buying just to hear "Sophisticated Shade."

Be sure to listen to: A rhythmic figuration drives "Goin' Down Slow," the sixth song on the disc. Sometimes it's barely audible, but it never loses its presence. The minimal, clean recording leaves no doubt that Bibb is responsible for the subtle dynamics.