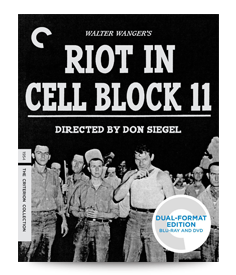 Prison reform is a contemporary issue, with state and federal governments hotly debating its solution. Prisons are overcrowded, often due to the incarceration of prisoners who have committed mere misdemeanors, and the imprisonment of so many has become a very expensive proposition. But Criterion's release of Riot in Cell Block 11 reminds us that prison reform isn't a new issue.

In the years leading up to the 1954 release of the movie, there were many prison riots across the United States, uprisings in which the prisoners would commandeer the prison, taking guards as hostages while demanding better living conditions. The riot in this movie is patterned after a 1952 riot in Jackson, Michigan. How it inspired a movie two years later is an interesting story.

The producer, Walter Wanger, had an excellent career in the 1930s and '40s in Hollywood. He produced such hits as Queen Christina (1933), Stagecoach (1939), and Foreign Correspondent (1940). In 1940 he married actress Joan Bennett. She signed with agent Jennings Lang and later began an affair with him. In 1951, Wanger became suspicious. After finding them together in a parking lot, he shot Lang twice (once in the groin -- let the punishment fit the crime!). Lang recovered, and Wanger and Bennett remained married until a divorce in 1965. But right after the shooting, Wanger had to face charges. With the help of a good attorney, he was sentenced to four months at a minimum-security facility north of Los Angeles.

Wanger was appalled at the conditions that incarcerated men faced, and he came out of prison wanting to make a film exposing those circumstances. Thus it was that Riot in Cell Block 11 came into being. Don Siegel was selected to direct after a few others had refused, and he brought an edgy feeling of suspense to the movie. Wanger and Siegel would go on, a few years later, to make one of the most iconic of science-fiction films, Invasion of the Body Snatchers (1956). Without Wanger, Siegel would go on to direct many films, the most honored ones being in the detective genre -- Madigan (1968), Charley Varrick (1973), and of course, Dirty Harry (1971).

The action of Riot in Cell Block 11 gets going quickly as an inexperienced guard is tricked and beaten by an inmate who gets the cell door keys and starts setting other prisoners free. They capture three more guards and make demands, threatening to kill the guards one at a time. Fortunately, this riot ends without loss of life, but there are some major injuries and a lot of frayed nerves along the way.

With the aid of such excellent actors as Neville Brand, Emile Meyer, and Leo Gordon (authentic casting, as he had been incarcerated for five years), not to mention an excellent script by Richard Collins and the authenticity of the Folsom State Prison setting, Siegel was able to make Riot in Cell Block 11 an exciting thriller that also packed a message. He used quick cuts, unique camera angles, and other cinematic tricks to keep us constantly on the edges of our seats.

The black-and-white photography is stark and sharply contrasted, just the kind of thing Criterion brings to home video with expertise. Any viewer will notice the contrast and how effective it is in giving a feeling of stark urgency to the movie. The refurbished soundtrack contributes much to the suspense and nervous feeling, with the sound of steel doors creaking open and clanging shut. Herschel Burke Gilbert's music score comes across in medium fidelity and is good, but not as effective as the metallic prison sound effects in keeping the action going.

As usual, Criterion has come up with some interesting extras to further one's enjoyment of the feature, and they are available on both the Blu-ray and the DVD that are included in the set. There's an excellent commentary with film scholar Matthew H. Bernstein. Siegel's son, Kristoffer Tabori, dramatically reads excerpts from "A Siegel Film" and "Don Siegel: Director." There are hefty radio excerpts from the NBC series The Challenge of Our Prisons, a lengthy bit dealing specifically with the Jackson riot. And the thick booklet that accompanies the discs carries an excellent essay by film historian Chris Fujiwara and "West Points of the Underworld," a 1952 Look magazine article by Wanger. There's also a brief article by Sam Peckinpah called "Don Siegel and Me."

Wanger passed away in 1968 and Siegel died in 1991. The movie they made together called the general public's attention to the problems prevalent in our prisons, but it didn't solve any of them on a permanent basis. Overcrowding is still a problem, and people who'd be more useful doing community service are locked in prisons, where they take up space and contribute nothing.

Be sure to watch for: During night scenes, the searchlight on the prison-yard tower seems almost like a character in the film. This is nowhere more evident than at the beginning of chapter 6, where it drifts across the yard and then picks up two characters walking and follows them, casting tall shadows before moving on. Eerie.