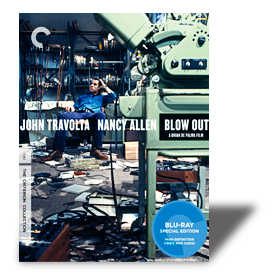 I've always felt that Blow Out was a great movie, though few critics, Pauline Kael excepted, seemed to agree with me. Perhaps this gorgeous Criterion Blu-ray will change its status. When the film was released in 1981, many complained that director Brian De Palma had sacrificed plot and clarity for exaggerated camera techniques. But now that we're constantly barraged with television commercials that use unending digital effects, De Palma's use of split screen, slow motion, and other visual effects seems quite natural and effective. We can now clearly see that the director's cinematic wizardry is indispensable in heightening the enjoyment of every scene.

John Travolta stars as Jack Terry, a sound-effects man who works for a sleazy horror-film company. He's out in the park at night, searching for new wind sounds for Co-ed Frenzy, the bad flick he's currently working on, and his recorder captures the sound of an accident that results in a car plummeting off a bridge into the river. The accident is caused by a blow out, but Jack is convinced that he heard (and recorded) a gunshot right before the tire was punctured, meaning it was actually a murder. In fact, it would be a political assassination, since the car's driver was a presidential candidate. Jack rescues Sally (Nancy Allen), an unexpected passenger in the car, and pursues the truth while he and Sally are chased by a zealous killer (John Lithgow) who wants to leave no witnesses alive. Jack is one of Travolta's best performances, and he creates a nice-guy character who the audience can relate to and cheer on. In the last three scenes his acting is absolutely Oscar worthy.

De Palma approved this video transfer of Blow Out, and for the most part it looks excellent. But it's not perfect. One scene shot inside a car is loaded with video noise, and some of the night scenes are a little murky, but most of the images are crisp and clean, especially exteriors. Skin tones are good, blacks are deep, and shadow detail is always adequate and often excellent. People who remember reel-to-reel tape will appreciate the clean-as-a-whistle close-up shots of vintage tape recorders. The sound is mostly up front with a little bit of ambient sound distributed to the rear channels. Pino Donaggio's music is rich and full, and the dialogue is clear.

Even if you didn't care for the movie, you have to check out this disc for one of the extras. Cameraman Garrett Brown, who invented the Steadicam, demonstrates the fascinating device and talks about his work on Blow Out. He's an engaging, interesting guy who makes for a vigorously entertaining extra. Others include a long interview with De Palma and a shorter one with Nancy Allen. De Palma's 1967 Murder à la Mod is also included in its 80-minute entirety. It's a mixed bag, more interesting as an experiment than as drama, but it presents some of the best black-and-white images I've ever seen on a video screen.

Blow Out is an engrossing movie, part political thriller, part noir, and part murder mystery with all its pieces adding up to an entertaining, satisfying whole.

Be sure to watch for: A little bit into chapter 6 there's a scene at a newsstand that's so sharp you can read the magazine covers. Even the snack-food packets look tangible. And don't miss the supplement Murder à la Mod, which has undeniably crisp black-and-white images.