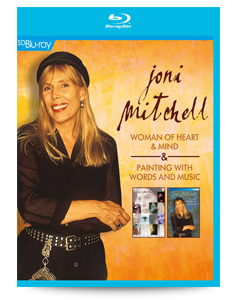 Eagle Rock has just put out two double features that make sense to me. There's this one, featuring Joni Mitchell, and another concentrating on Lou Reed. Each presents documentary material about the artist balanced with a live performance. The Mitchell documentary is Woman of Heart & Mind, from 2003, and it traces her career from her childhood days in Canada to her lush late-career version of "Both Sides, Now." The concert was filmed in California at the Warner Brothers Studio in 1998. Previously released on DVD, both have gone through video and audio digital remastering.

Joni Mitchell is one of the greatest songwriters that pop/folk/rock music has known. She ranks right up there with Paul Simon, as far as I'm concerned. I was hooked when I heard her first album, and she's the only artist who can make me truthfully say that I have all of her albums. She's influenced countless other artists, many of whom have covered her songs. Artists as disparate as Judy Collins and Madonna credit her as an inspiration. According to Wikipedia, there have been 587 versions recorded of "Both Sides, Now" and 223 of "Big Yellow Taxi."

Susan Lacy wrote and directed the documentary, and she and fellow producers Terry Shand and Geoff Kempin have done a superb job of finding archival photographs and video footage. They tell Mitchell's story simply and directly without adding too much editorial attitude. There's lots of music as well. It's shortened, but not in the butchered truncations you usually hear in artist documentaries. You can actually relax and enjoy some of it!

The concert took place at a location in the round, where the medium-size audience had plushy sofas and chairs to lounge on. The backup band consisted of Brian Blade, drums; Mark Isham, trumpet; Larry Klein, bass guitar; and Greg Leisz, guitar and pedal steel. Mitchell is an excellent painter and musician (she's created all of her own album covers, with Turbulent Indigo winning a Grammy for both performance and album design), and her paintings are displayed on an upper tier behind the audience. Occasionally the camera will cut to one of them in a meaningful moment, but I think a lot more could have been done with them, perhaps a still-frame gallery.

Mitchell is very relaxed and in good voice, and she has an obvious rapport with both her fellow musicians and her audience. She gives dimpled smiles often, and when she smiles it's as if the sun has come out. With her sly sense of humor and her easy conversational delivery, she's a radiant and attractive personality. At this concert she sings her own songs, both famous and less so, but also does three delightful covers: "Why Do Fools Fall in Love?" (complete with doo-wop chorus), "Trouble Man," and "Nothing Can Be Done," which contains some amazing trumpet riffs from Isham.

The cameras are for the most part handled well, not too busy or too static, and the upconverted video is sharp and clear, with great contrast and a wonderful color palette. The sound, however, is problematic. It's presented in both PCM stereo and five-channel DTS-HD Master Audio. They both work for the documentary, but for the concert, the five-channel effort is a disaster. Mitchell's voice is center channel only, and it's been mixed down in the mud underneath the full-bodied instruments. The effect was so bad that I got out a test disc to make sure my channels were properly balanced. They were. Fortunately, the PCM two-channel mix is OK if you crank it up loud enough.

There are no extras except for some outtake interviews for the documentary, but there's plenty on this disc to enjoy, and it is offered at an attractive price. Even having to forget DTS and employ the PCM workaround, it's well worth seeing and hearing.

Be sure to watch for: During the 1998 concert, Graham Nash, who was Mitchell's lover in the early days, is on hand to present to her the award for being inducted into the Rock and Roll Hall of Fame. She apparently had not been able to attend. It's a sweet Kodak moment.