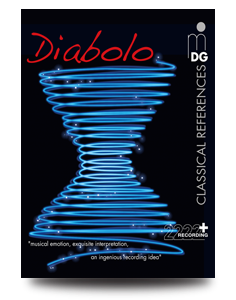 A Perfect Sampler with Test Tones

Based in Detmold, Germany, MDG (Musikproduktion Dabringhaus und Grimm) is the creation of producers Werner Dabringhaus and Reimund Grimm. The label now boasts a very large catalog of recordings offered as hybrid multichannel SACDs (hybrid meaning that they will also play in a regular CD player, but only in stereo with Red Book CD specs). On an SACD player -- any Oppo player, for instance -- they will play through all six channels. MDG's six channels are unique, and they're called 2+2+2: left front, right front, left surround, right surround, left-front top (height), and right-front top. Amazingly enough, these channels are said to be compatible with the typical 5.1 setup: left front, center, right front, left surround, right surround, and LFE (subwoofer).

Early on, MDG also released DVD-Audio-based 5.1-channel discs, but for the past decade all the releases have been SACD. Now MDG has discovered Blu-ray, and has been able to go two channels more for an eight-channel arrangement that adds surround top-left and surround top-right speakers, a system backward compatible with the 2+2+2 configuration, and also compatible with 5.1 and 7.1.

To celebrate, MDG has released Diabolo -- Classical References, a set that presents 28 excerpts from the MDG catalog on both a hybrid multichannel SACD and a Blu-ray Disc. MDG does all of its recording and mastering using the PCM format at 24-bit/96kHz resolution before conversion to DSD for storage on SACD, while the Blu-ray uses DTS-HD Master Audio.

The musical excerpts range from solo harp and piano through various chamber music configurations to full symphony orchestra. Never before have I given a sampler disc a five-star rating, but Dabringhaus and Grimm have an uncanny gift for combining outstanding artists, time-proven or unjustly neglected music, acoustically perfect halls, and compatible recording techniques to produce one perfect recording after another. In a field that contains some fine audiophile labels such as Reference Recordings, 2L, and AIX, MDG is the crown jewel.

But even those who don't normally pursue classical music can find this set of two discs indispensable. The Blu-ray contains all the test tones you need to tweak your system to be worthy of playing an MDG recording. There are some really cute channel-identification announcements by nine-year-old Richard, and then comes the heavier material.

You'll find pink noise at -10dB for all eight possible channels. Get yourself an inexpensive RadioShack SPL meter, and you can balance your available channels with precision. After these tones come extensive phase tests between all pairs of speakers. You usually get front left and right on test discs, but the MDG disc contains all pairs, such as the right front and right surround, as well as the left and right surround channels. After the usual pink-noise tests, there's a recording from the MDG catalog that is played in mono to further nail down any phase problems. Tracks 60-67 are concerned with setting up the subwoofer. These allow you to get a median subwoofer level (MS) and a median left channel level (ML). When MS = ML, the subwoofer is correctly balanced.

Diabolo -- Classical References contains, in addition to the two discs, a beautiful 52-page booklet that shows, in full color, the cover of each album that is excerpted, as well as some review excerpts, which are all positively glowing. With MDG, how could they be otherwise?

Be sure to listen to: Track 16 presents an organ piece by Heinrich Scheidemann (1596-1663) that demonstrates both incredible precision and recording-location warmth. This must be a real treat in 2+2+2 because, when you think of it, virtually all organ pipes are placed over the listener's head!