Terry Trotter: "I Play the Piano" 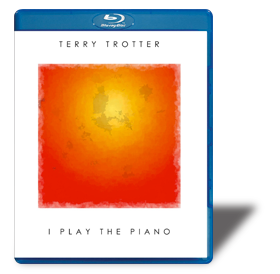 Terry Trotter might be referred to as a studio musician, but that would conjure up the wrong picture. Though I'm sure he's very valuable as a studio musician, his art goes way beyond that label. He's played for some of the greats, including Lena Horne, Frank Sinatra, Art Pepper, Chet Baker, and Steve Lawrence and Eydie Gormé. He's also been Natalie Cole's pianist for a dozen years. You can often find his name in the fine print on an album jacket, but Trotter has recorded some discs where he's the main focus, most notably a series of jazz interpretations of music from Stephen Sondheim's Broadway shows.

On this disc Trotter plays solo, and he's compiled a list of 21 cuts that range from jazz standards, such as "Willow Weep for Me," "Body & Soul," and "Sophisticated Lady," to the traditional "The Kerry Dance." He's also included a couple of his own compositions -- "Sssupp!" and "Serenity Within." Sometimes he uses sheet music, and sometimes not.

Though he possesses prodigious technique, Trotter is not a flashy player. He invites you in to listen to his playing rather than hitting you over the head with it. This album is very mellow, giving listeners the feeling of spending late-night hours in a jazz club. As humble as his approach is, one has to admire the way he plays so dexterously, as in the sassy, bluesy "Sssupp!" And if you were to just listen to "In a Sentimental Mood" before watching it, you'd be amazed to find that Trotter is playing with only his left hand! The veteran pianist is also sensitive to every nuance a song might contain. Watching this disc, it's easy to see why he's known around Los Angeles as a musician's musician.

I've noted lately that the piano sound on AIX Records Blu-ray Discs is about the most realistic around. This disc is no exception. The viewer/listener has a choice of three mixes: 5.1-channel Dolby TrueHD Stage and Audience mixes, and a 2.0 PCM stereo mix -- all 24-bit/96kHz. If you have a Blu-ray drive on your computer, you can also partake of a FLAC two-channel 24-bit/96kHz mix, a two-channel 320kbps MP3 mix, or a two-channel headphone surround-sound mix. The video for the program is almost as excellent as the audio. The cameras let you see the performer from almost every angle, even looking down from above. These are edited to prevent boredom, but they don't change so quickly as to set your head spinning.

Mark Waldrep, CEO and recording engineer for AIX Records, has a formula for stringing songs together. Each piece is presented like a separate track. The visuals come up and there's text overlay identifying the song. At the end of the track, after the last chord has stopped ringing, the camera fades to black. There's no live audience, and since there are no extraneous sounds you can just turn off the video and listen to it like an audio-only disc, the big difference being that you'll hear it in HD! Though the Stage mix was a little warmer, I preferred the Audience and PCM mixes for this program, as they were just a tiny bit more transparent. All of them are impeccable for what they are; how wonderful to have a choice.

Be sure to listen to: "Tea for Two" closes out the disc. You might expect the usual cloying upbeat treatment, but Trotter plays it slow and detached, with the melody in very short notes against held chords. It's daring in its simplicity and exhibits control and whimsy above the norm. The Blu-ray also contains as an extra an interesting interview with Trotter where he discusses the relationship between jazz and classical music.