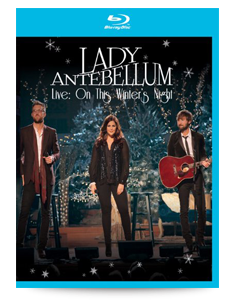 In a very short period of time, Lady Antebellum has become a huge success. Formed in 2006, the pop-country trio has won a slew of awards including several Grammy Awards. Country artists typically have a much closer relationship with their audiences, so they regard Live: On This Winter’s Night as a way of giving back to fans.

Filmed and performed at Nashville's beautiful Schermerhorn Symphony Center with elaborate sets and lighting, the 2012 show has now been released in 2013 on Blu-ray and DVD by Eagle Vision, a division of Eagle Rock Entertainment, Ltd. Though they are by now world famous, the three artists (Charles Kelley, Dave Haywood, and Hillary Scott) come across as down-home folks you'd be happy to have over for dinner. At first I thought it might be an act, but after 30 minutes of listening, I found that their actions and attitudes just seem too genuine not to be real.

Though the trappings are elaborate, including a 40-piece orchestra that is most probably drawn from the ranks of the Nashville Symphony Orchestra, and a big jazz band, the music making is simple and effective. Kelley is a most appealing lead singer, and his versions of "I'll Be Home for Christmas" and "Blue Christmas" resonate as authentic and near definitive. Perhaps I have heard these tunes sung as well, but never better. When the three members sing together, their harmony is as tight as can be; they sing as one. And their stage presence is relaxed and easy. What's not to like?

Well, maybe the post-production three-on-a-couch talks that are interspersed throughout the concert. They're A-OK the first time around; it's neat to have the trio share their special feelings and memories about the holiday, but I've a feeling that these spoken interludes might become irritating on a third or fourth viewing. It would have been better to put them in a supplemental section. But judging from the breaks, the concert was originally conceived for television, so that might not have been possible.

The video and audio quality are excellent. The picture is as sharp as a tack, and the colors are rich and full. The audio balances the trio, their backing band, and the orchestra and big band perfectly with nothing ever seeming obtrusive or out of place. I prefer the DTS-HD Master Audio 5.1 because it makes the air around you sparkle with audience participation.

Extras include acoustic, filmed-in-the-living-room versions of "Blue Christmas," "The First Noel," "Christmas (Baby Please Come Home)," "Have Yourself a Merry Little Christmas," "A Holly Jolly Christmas," and "Silent Night (Lord of My Life)," for which Kelley has provided a new and beautiful counter-melody. It's interesting to be able to compare these acoustic versions with the more complicated ones presented at the concert. There's also a brief production featurette.

If you're looking for something traditional and comfortable for the season, I highly recommend this disc.

Be sure to watch for: There's a fun music video for "A Holly Jolly Christmas" that features a precocious little boy using technology to grab a kiss under the mistletoe.