The Apple iPad and Alternatives

I've been on the lookout for cool devices to take with me on vacation. I need something to keep me occupied in the airport or on planes -- a device that plays music and movies and has a long battery life for endless flights. Something that lets me surf the Web would be a bonus, as I could leave my laptop at home.

One such device that I've been using for a few years is the Sony PlayStation Portable (around $200 for the base PSP with Core Pack). It has a nice widescreen display, plays MP3s and WAV files, and has good video quality. But it's getting long in tooth, with only Wireless B and a crappy Web interface that makes surfing tortuous, so I still have to make room for my laptop. I also have to convert all video to a format that's compatible with the PSP, and that's becoming more of a problem as I get lazier and older. Even worse, the battery lasts less than a few hours.

A new gadget that caught my eye is the Apple iPad ($499 to $829 USD). Launched on January 27, 2010, the iPad resembles a jumbo version of Apple's iPod Touch (starting at $199), complete with touch screen and long battery life. As much as I think the iPod Touch is, as the Brits would say, "a brilliant piece of kit," my initial reaction to the iPad was tepid. I thought it was just an iPod Touch that you couldn't put in your pocket, but my excitement grew when I started exploring what it can do. 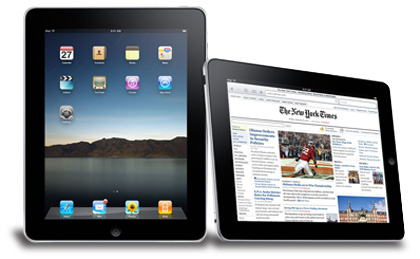 My initial beef with the iPad was the size of its unprotected screen. With a screen this beautiful, I'd be too worried about scratching it to take it anywhere. But I found a case on Apple's Website that looks like a large organizer. And since I regularly carry an organizer with me, I could easily picture myself walking around with it in hand -- without sheepishly slinging a dreaded man purse over my shoulder.

The iPad's battery life is rated at ten hours, which is awesome. I could use it for a whole day or two and recharge it at night. And with a thickness of only 0.5 inches and a weight of only 1.5 pounds, it's a very portable device indeed.

As the Apple ads demonstrate, you can use the iPad as an e-book reader, and with a screen that big and sharp, it would seem to function well. Although in a bright environment, the e-paper screen on the Sony Reader (starting at $199) might be easier on the eyes. One promotional photo shows the New York Times on the iPad screen, and I'm stoked about using it as a newspaper reader. Call me old school, but I still subscribe to my local fish wrapper because I like the look and feel of a real newspaper. But having the newspaper in an iPad-formatted screen would go a long way to clearing up my newspaper recycle bin, if not my computer recycle bin.

With Apple's clout, I have no doubt that the iPad will bring e-books to the masses. Even though Apple has said that it won't be offering books through iTunes, with the iPad’s mass appeal, everyone else will support it.

As an audio lover with a decent collection of high-resolution discs, I'm not overly impressed with what the iPad offers in the audio department. It has a built-in speaker and headphone jack. Wow. But it allows remote access to your iTunes library, a feature that's cool but by no means revolutionary. The iPod Touch offers it, and my several-years-old Sony PSP offers Wi-Fi access to my PS3 music library. What this feature means is that anywhere you have access to a Wi-Fi connection, be it your home or your local coffee house, you can listen to your tunes. The playable formats, which include MP3, Apple Lossless, and WAV, are the same as any other Apple audio player. As expected, the iPad doesn't accommodate audio formats like 24-bit/96kHz PCM.

One of the issues I have is the iPad's lack of expandable storage for all the music I want to take with me. The 16GB offered in the base model ($499) doesn't seem like enough for an all-in-one device. 64GB is much better, but you pay through your nose ($699) for the extra storage.

So far, I like what the iPad offers, even though none of the features are groundbreaking. But where it really lets me down is in its video performance. Although the native screen resolution is limited to 1024x768, I can live with that, as no one can really discern higher resolutions at normal viewing distances. What bugs me, however, is that the iPad is touted as HD, compatible with H.264 at 720p, even though it can't output greater than 576p through the component connector on the iPad dock. And no HDMI connection? Geez Louise!

While the iPad ticks most of the boxes on my list of things to look for in a cool gadget, there are other devices that tick all of them, such as the ubiquitous netbook. Even better is the ultraportable notebook, since a true netbook lacks most of the video amenities I seek. These new near-netbooks come in all sorts of configurations, with 11.6" to 13.3" high-def screens (1366x768), smooth playback of 720p or 1080p video, HDMI output, and long battery life. Some have tablet-type screens, while others even have built-in DVD burners. Sure, these are Windows 7 machines, which is a deal breaker for Apple fans, but these notebook computers offer multitasking and 250GB hard drives, making them a compelling alternative to the iPad. For my needs, the ultraportable notebook comes closest to being a one-device vacation gadget.

The HP Slate (estimated to start at $549) was introduced at CES 2010 as an "iPad killer," though it has no announced shipping date as of this writing. It appears to have the same form as the Apple iPad, with the added benefits of 1080p video output, an HDMI connector from its dock, and an SD card reader -- three features that the iPad lacks. As a Windows 7 machine, the Slate will also allow multitasking. On paper, it's a great alternative to the iPad, until you get to the battery life, which is rated for only five hours. This would be a deal breaker for me, but it would be interesting if HP could bump it up before they ship the device.

After comparing the devices, I feel compelled to go with the ultraportable laptop to meet all of my media-player needs on my next vacation. It offers enough power to replace my usual laptop, and it has long-enough battery life and small-enough size for use on a plane. But I'd still give the Apple iPad and HP Slate a try (if the HP Slate isn’t delayed too long) before making a decision. You can never underestimate the power of touch and feel when buying a new gadget -- especially when Apple is involved.