This little outdoor speaker supplants JBL’s popular Charge 2 and sells at the same price: $149.95 USD. It’s available in black, gray, blue, teal, or red, and has a waterproof rating of IPX7, which means you can briefly but fully immerse it in water. It also plays loud, which makes it great for outdoor or poolside parties, and several Charge 3s can be paired for even greater SPLs. A free JBL app lets a pair of Charge 3s play in true stereo. 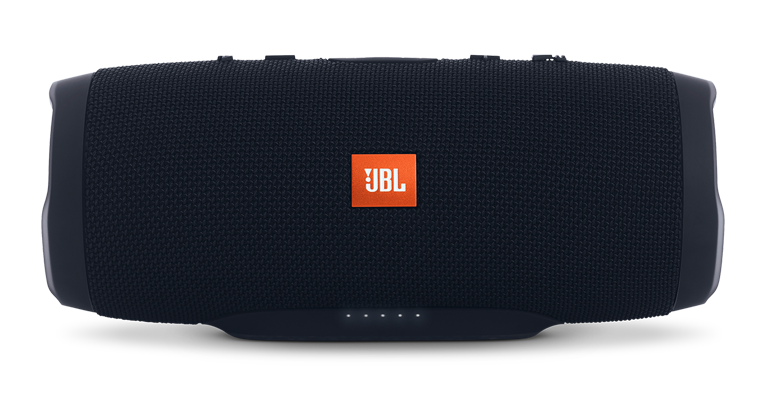 The JBL Charge 3’s box is of heavy cardboard printed with photos and selling points, and bright accents in JBL’s usual bright orange. Open the hinged lid to reveal the speaker, nestled in black plastic, and a box of orange cardboard that includes the accessories: a USB-to-USB-Mini charging cord and a USB-to-AC adapter, both of these orange as well. Also included are a quick-start guide, and booklets about the one-year warranty and how to dispose of used batteries.

The cylindrical Charge 3 is 8.5” long by 2.75” in diameter, and weighs a hefty 1.75 pounds. It sits on a little rubberized base that keeps it from jumping around and increases its overall height to 3.75”. On the front is the JBL logo in white type against orange, and the passive radiators at each end also bear large JBL logos. These radiators aren’t protected by grilles -- you can see them bounce around like crazy when there’s heavy bass. However, the lack of grilles also means that they can easily be punctured by something sharp in your travel or gym bag -- you can’t just toss the Charge 3 in and hope for the best. I wonder why JBL didn’t cap each end of the cylinder with a grille, perhaps a removable one. There’s still a chance to offer one as supplemental feature.

Inside a waterproof compartment near the bottom of the cylinder, just above the base, are the input and output jacks: 3.5mm for listening to devices that might not have Bluetooth, USB for charging another device while listening to the Charge 3 (hence its name), and another USB Micro jack for charging the Charge 3. On the front of the base are five light-blue LEDs that indicate the remaining battery charge. 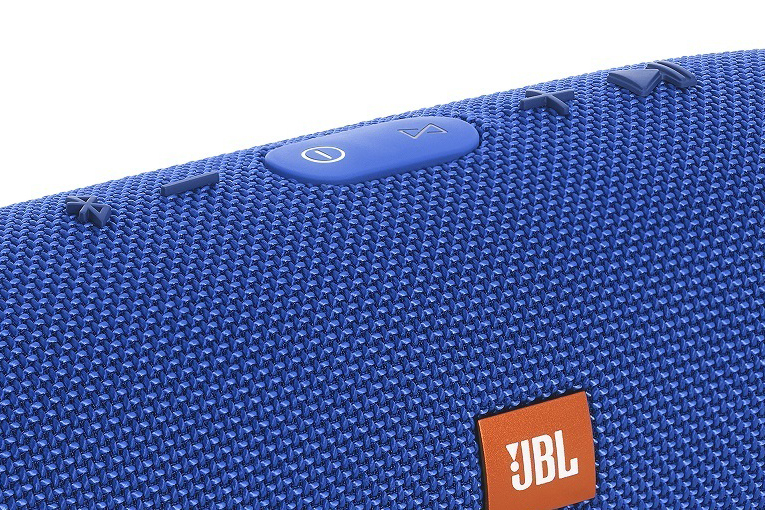 Along the top of the cylinder as it lies on its side are the controls: four raised buttons for Volume Up and Down, Bluetooth Pairing, and Next; and, at the center of these, a rocker switch for On/Off and to connect another Charge 3.

The Charge 3 is built like a tiny battleship. Except for those exposed bass radiators, it’s solid as a brick, fits the hand about like a football, and is easy to carry around. According to JBL, it has Bluetooth 4.0 circuitry, two 2” (50mm) drivers, and a built-in, rechargeable, 6000mAh battery that offers up to 20 hours of play on a full 4.5-hour charge. The specified frequency range is 65Hz-20kHz.

Pairing the Charge 3 was simple. When you turn it on, it makes some alarming sounds (you’ll get used to them) indicating that, well, you’ve turned it on. The first time you pair it with your device, you’ll have to then find it on your device, then pair them. After that first time, the Charge 3 will connect to that device automatically. 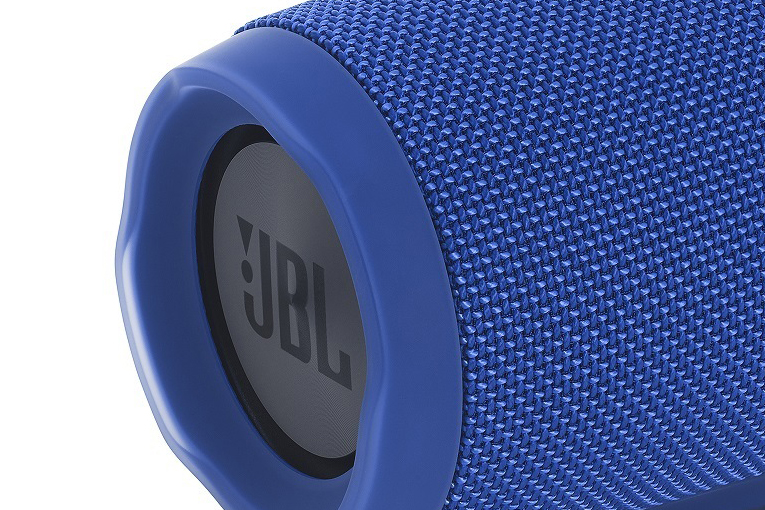 That range was about 21’ indoors, more outdoors. I was able to charge my iPod Touch while listening to music, and all of the controls worked as described. It’s odd that there’s a Next button but no Previous button. JBL says that the Charge 3 can be updated via the app; perhaps someday they can install a three taps=Previous function.

The Charge 3’s sound was, in two words, loud and brash. It seemed very clear to me that JBL’s main objective was to produce a speaker for outdoor activities, and for such purposes the Charge 3 seems close to ideal. It’s one of the loudest Bluetooth speakers I’ve heard; I could push it to its maximum level without hearing any distortion. Thanks to those passive radiators, its mid and upper bass were good, though really low bass was of course unattainable. It had lots of peaky midrange, and a raucous upper range somewhat lacking in definition or finesse. If you’re looking for a party speaker for outdoor gatherings or a fairly large indoor space, the sound is just right. For serious listening, however, it leaves something to be desired. 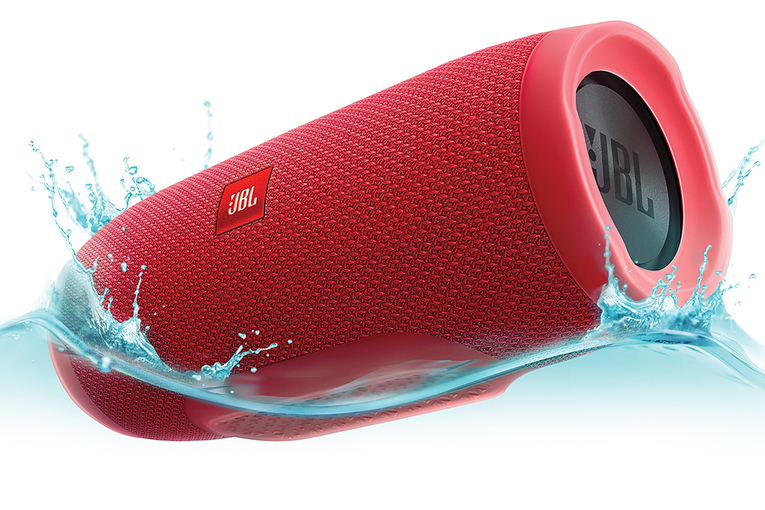 David Bowie’s “Let’s Dance,” from Let’s Dance (16-bit/44.1kHz ALAC, EMI), bounced along with great punchy rhythm -- those passive radiators were visibly and aurally working hard. Bowie’s voice was very forward and demanding of attention; highs, such as cymbals, were less focused. Overall, it was a real party sound.

“Yellow Submarine,” from the Beatles’ Revolver (16/44.1 ALAC, Capitol), was jolly good fun -- Paul McCartney’s bass line was solid, Ringo’s lead vocal was forward but not too aggressive, and the myriad midrange and lower-treble effects all came through with good clarity.

The guitar that begins the title track of Reckless Kelly’s Wicked Twisted Road (16/44.1 ALAC, Sugar Hill) was very full and rich in the midrange, but the raucous drums in “Wretched Again” grated on my ears at close range. From the next room, everything sounded fine -- again, this is a good party speaker that’s best heard from a distance. 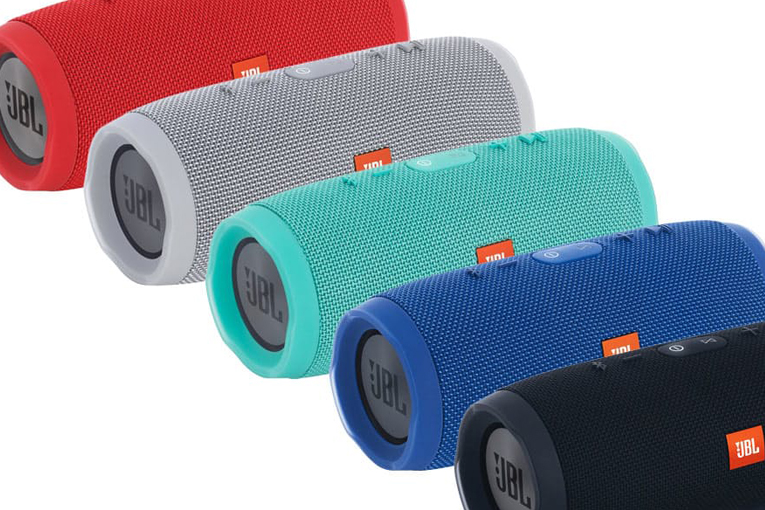 Orchestral music fared better than I’d expected. Midrange woodwinds had an appealing and focused sound, and the mid- and upper bass were abundant. Only the highs were a problem, lacking the sweetness and air that the best speakers and headphones can provide. Beethoven’s Piano Concerto No.5, performed by pianist Clifford Curzon with Hans Knappertsbusch conducting the Vienna Philharmonic (16/44.1 ALAC, Decca), was a good listening experience.

The JBL Charge 3 is one of the most capable Bluetooth speakers I’ve heard in terms of its ability to play loud -- what it lacks in finesse, it makes up in volume. You can also connect more than two, in mono or stereo, using JBL’s free app. LEDs tell you what the battery charge is, and the Charge 3 can charge another device while it’s playing. These are all very attractive features, and its waterproofing makes it the perfect pool-party speaker.