When Astell&Kern’s AK240 was launched, it was immediately apparent to all that it was the best portable media player around. But it sold for $2499 USD, and seemed destined for use by only the 2%. Mindful of the thousands of audiophiles who might appreciate but can’t afford the AK240’s marvels, Astell&Kern created the AK Jr, which maintains a high standard of quality at a much lower cost: $499. 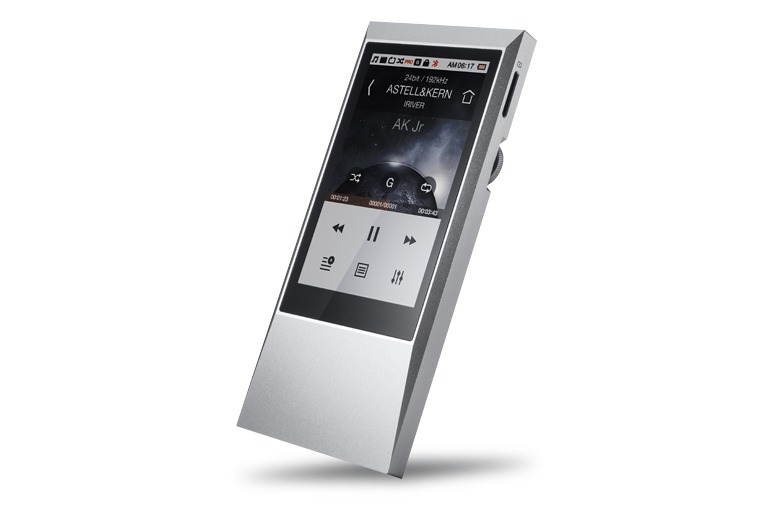 The AK Jr comes in a smallish oblong box -- it would be a perfect stocking stuffer for someone very special. Inside is a tray that contains a USB-to-Micro USB charging cable. The AK Jr itself is nestled in a recess and covered with transparent plastic so it can easily be seen. Also included is a quick-start guide and warranty information. Two sheets of protective film safeguard the AK Jr’s screen, and there’s a cover for the microSD card slot (already installed on the AK Jr).

There’s no case of fine leather, as with the AK240 and AK380, but on Amazon you can find combo packages that include a case and charging accessories that still cost less than $499 -- or you can buy a leather case separately for very little money. 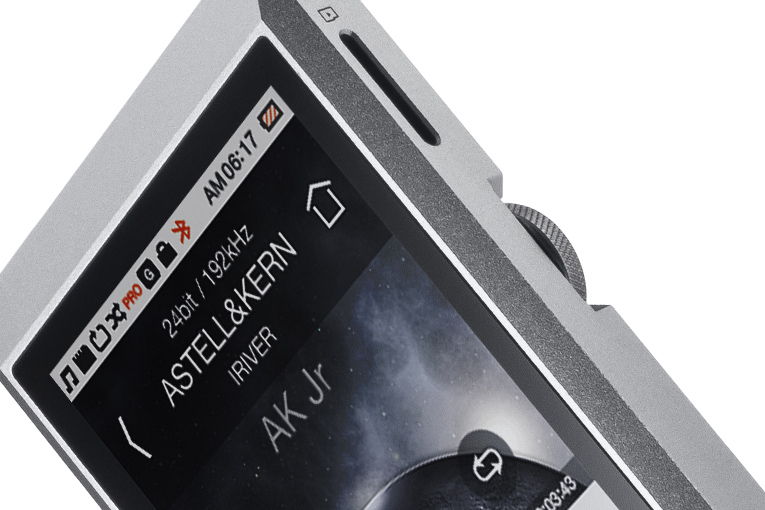 Along the top edge are a 3.5mm output jack and a Power pushbutton. On the bottom edge is a Micro USB port for connecting the charging cable. Along the left edge are three small buttons: Previous/Rewind, Play/Pause, and Next/Fast Forward. On the right edge are A&K’s signature volume-control wheel, which allows precise adjustment of the volume, and a microSD card slot (64GB max). The AK Jr itself has 64GB of storage; adding the maximum microSD doubles that, to 128GB.

The AK Jr has a Wolfson WM8740 24/192 DAC chip, and its USB input allows it to be used as a computer-audio DAC. It’s compatible with Bluetooth 4.0 devices, and its built-in battery provides up to eight hours of playback. The AK Jr’s specified output impedance is 2 ohms, its total harmonic distortion is 0.005% (1kHz), and its signal/noise ratio is 112dB.

I used the AK Jr with headphones and KEF’s remarkable new Muo Bluetooth speaker. Bluetooth connectivity is not the AK Jr’s strongest suit. Each time you connect it to a Bluetooth device, it must be paired anew -- the AK Jr won’t remember your devices. I also noted that, before pairing, I had to use the little trashcan symbol to delete a device, even if it was the same one I was now trying to connect. Any Apple product could do better -- but probably wouldn’t sound nearly as good.

The operation of the AK Jr’s touchscreen will be straightforward for anyone who’s used an Android device. However, the player’s playlist protocol is “song” based; moving entire albums around is not an option. But working from the main menu, you can browse your files by album, artist, song, or genre. Select an album and you’re given a playlist of songs from it; when you’ve selected one of those -- the first, if you want to play the whole album -- the A&K displays the album cover, the bit and sample rates, and duplicates on screen the physical buttons for skipping forward/back and pause. Tap the three dots in the lower-right corner of the screen to bring up a five-band equalizer or to view additional information about the track playing. Tap the middle of the album cover to make all the writing go away so that you can see the cover art in all its splendor. If the cover image is hi-def, the AK Jr’s resolution can be breathtaking. 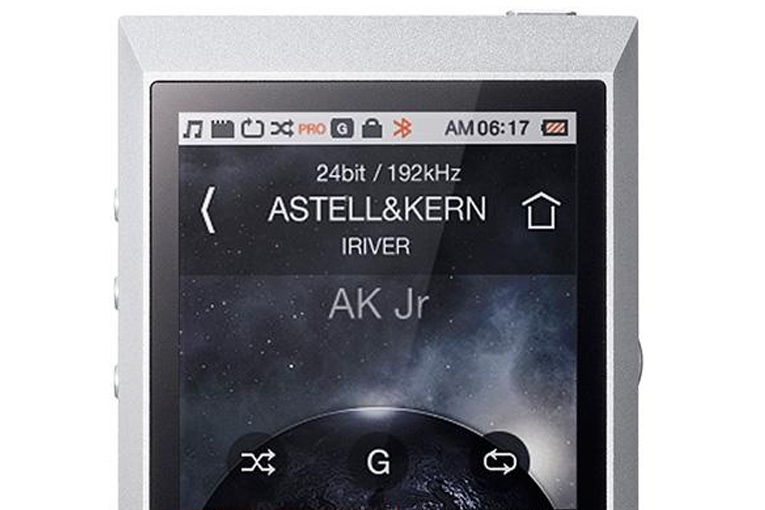 The various displays shift fairly smoothly and rapidly, but the AK Jr took a second or two to transition from album-cover mode to album list. That was the only thing it did that I would have preferred it did a bit faster.

In the Settings menu you can set the date, time, display language, line-out level, shutdown time for display and power, Bluetooth settings, as well as scan your library, call up system information, and reset everything to the factory defaults.

This little guy could do justice to CD- and HD-quality music played through my main audio system. To do this, I chose Line Out and ran a patch cord from the AK Jr’s headphone jack to my preamplifier’s input. This meant that I was using the AK Jr’s own DAC, but that was OK -- it’s a good one. (The AK240 has an output jack that doubles as a digital output that bypasses the player’s DAC so that you can use the DAC in your preamp.) A small complaint: Because the output jack is at the top of the AK Jr, whether my headphones or my main audio system was hooked up to it, the cord was very much in the way. It would seem more logical to have it at the bottom of the player. 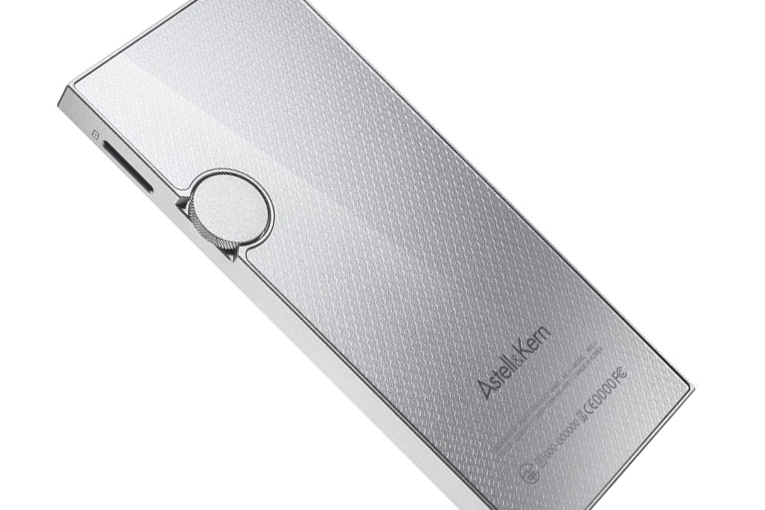 I found the AK Jr a delight to use: simple, straightforward, and, Bluetooth pairing aside, logical. And I love that the volume wheel permits such precise adjustment.

God bless the AK Jr’s Wolfson DAC chip -- it provided rich, warm sound that was as detailed as I could desire. And bless the A&K’s 1.95V RMS maximum output, which allows it to drive good headphones to high volumes without the need for a separate headphone amplifier (though I suspect that serious headphone listeners will use one anyhow).

For the Acousence label, the conductor Jonathan Darlington has made some sensational 24-bit/96kHz recordings with the Duisburg Philharmonic. Under his baton, they sound as good as any German orchestra other than the Berlin Philharmonic. One of my favorites is their recording of Mahler’s Symphony No.5. Through the AK Jr, the solo trumpet at the beginning sounded a bit throatier than usual, but was still clean and clear in attack. When it hit the top note, the A&K unlocked the full orchestra, topped with a shimmering cymbal crash. After some pointed exposition from the brass, the strings begin a plaintive second theme, lush and eloquent, with wry commentary from the first trombone. Through the AK Jr, all of these details emerged with uncanny presence and subtlety from the file (24-bit/96kHz FLAC, Acousence), which I’d downloaded from the Linn Records website. This recording is so clean and transparent that I had an image of the 100 or so musicians providing a stadium-style experience.

Carmen Gomes is a jazz singer who hangs out in Europe, primarily the Netherlands, where she’s made 24/96 recordings for the small but very choice label Sound Liaison, which sells only downloads, and only from its own website. Torn, her best blues album, was recorded with only acoustic guitar, double bass, and drums. Through the AK Jr I heard a perfect balance of the three instruments in every track, each detail absolutely clean and adding up to a rich, full sound. Add Gomes’s voice, perfectly balanced with the instruments through the A&K, and it was something special. Listening to the AK Jr through headphones provided an experience that should open a lot of ears to digital music. For me, it beat analog cold. 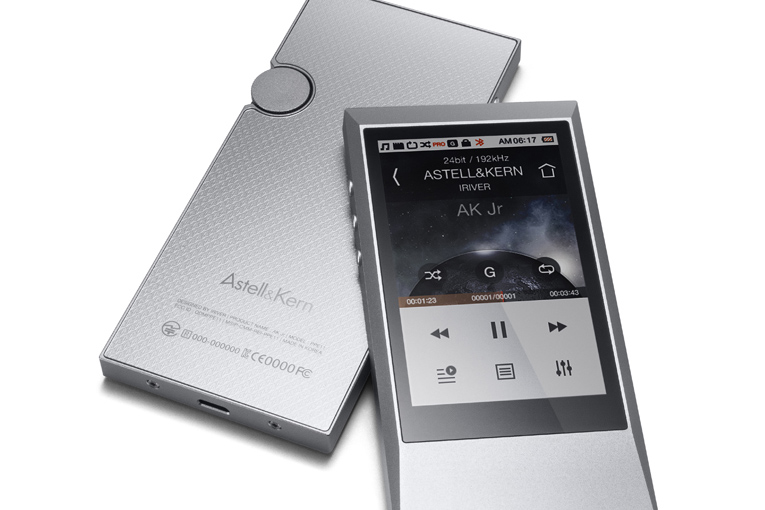 I decided to try out some holiday titles in CD resolution, and began with the popular “Riu, riu, chiu,” a renaissance song in a lively dance rhythm. In the version I have, from Joel Cohen and the Boston Camerata’s A Renaissance Christmas (16/44.1 ALAC, Nonesuch), the music begins with unaccompanied voice. One by one, instruments and other voices enter, until the joyous ending. Using the AK Jr and good headphones, I was able to hear more detail than usual.

This was also true with Christmas Angels, a lovely holiday album by the Vienna Boys’ Choir and the Vienna Symphony (16/44.1 ALAC, RCA). Their version of “Stille Nacht” -- the best of hundreds I’ve heard, and sung and played as a folk waltz in a distinct 3/4 -- boasts larger forces than in other recordings by the Vienna Boys’ Choir, but it remained lucid and charming thanks to the AK Jr’s faithful reproduction of the original recording’s transparent sound.

I then turned to the secular side of the holidays and Dwight Yoakam’s Come On Christmas (16/44.1 ALAC, Reprise). “Run Run Rudolph”’s twangy electric guitar, heavy drums, and Yoakam’s nasal vocal showed that the AK Jr could tackle music of any genre with absolute success. The song was delivered with punch and perfectly timed rhythm.

I was listening to these holiday tunes via a SanDisk 8GB microSD card. Though the cards can be used merely to expand the AK Jr’s memory, you can get creative and store special collections on different cards. I have three so far: holiday music, Verdi operas, and organ music by J.S. Bach.

All in all, listening to Astell&Kern’s AK Jr was pure pleasure. It handled all types of music with ease, and its already-sufficient storage capacity can be easily expanded with microSD cards. Its operating system is simple, it’s small enough to tuck just about anywhere, and, best of all, it provided me with champagne-quality sound at a beer-bottle price. OK -- the price of a bottle of imported beer -- but the AK Jr still costs less than a fifth the price of the original AK240, and sounds nearly as good.