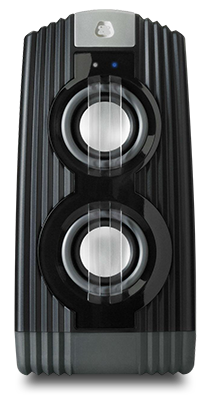 Sometimes, when I’m not inundated with review samples, I go browsing in stores to see what’s new. This month’s expedition turned up G-Project’s G-Go wireless speaker. I was interested primarily because the box claimed it to be “water resistant,” and while I’m very happy with Grace Digital’s waterproof ECOXBT Bluetooth speaker, I’m always looking for something better.

The G-Project G-Go ($69.99 USD) comes packaged with an AC power cord, a 3.5mm cord for connecting accessories, and an instruction manual. The speaker itself, made of plastic and a rubberized material, weighs 2.4 pounds and measures 10”H x 5”W (at the base) x 4”D. It comes in black, white, or metallic blue, and looks and feels quite rugged. The two drivers are in the front, giving the G-Go the look of a miniature tower speaker. The drivers are exposed, but each is protected by two strips of solid, clear plastic. Above the top driver are two LEDs: the one on the left is white; a steady glow indicates that the G-Go is powered up, and it flashes when the battery is low, the music has been paused, or a volume button has been pressed. This LED also indicates which of the EQ button’s four settings has been selected: EQ1 (Flat), EQ2 (Rock), EQ3 (Pop), or EQ4 (Jazz). You can tell which you’ve selected by the number of times the white LED flashes. The blue LED on the right flashes during pairing with a Bluetooth device: it glows steadily when that process has been completed.

On the rear of the G-Go are a built-in handle, small reflex ports to enhance the bass output, and a compartment with a hinged door that can be locked and sealed by flipping it down and turning the locking knob -- a sturdy and effective design. Inside the compartment are the inputs: a mini USB, a 3.5mm line in, and an inlet for the power cord. When the G-Go is running on batteries, the 3.5mm line input is shut off. In fact, all of the inputs are rendered ineffective with battery power -- if anything were plugged in, you wouldn’t be able to close the door to seal out water. You can charge compatible units using the USB input, though this will work well only if the G-Go is plugged into the wall.

On the bottom of the speaker is the battery compartment, with the same type of sealed door as on the rear panel. The G-Go requires four AA batteries (not included). A built-in ribbon eases battery removal; without it, I found this ostensibly simple task something of a pain. G-Project says the G-Go will run about eight hours on batteries, depending on volume level.

The G-Go’s smooth left side is devoid of any controls; they’re all in a column on the right side. From top to bottom are buttons for: Power, Volume Up/Down, EQ, Play/Pause, Skip Forward/Back, and Bluetooth pairing. The buttons are of different sizes, perhaps to make them easier to find, but I imagine you’re still going to have to look most of the time.

Getting started and use

Pairing my iPod Touch with the G-Project was simple: I pushed the G-Go’s Pair button, looked for the G-Go to appear on my iPod’s list, and selected it. The pairing happened almost immediately. From then on, all I had to do to use the G-Go with the iPod was push the G-Go’s Pair button. It’s the simplest pairing sequence I’ve experienced with any Bluetooth product.

The controls worked flawlessly. It was nice to have the basic Play/Pause and Skip controls. The whole idea of using a water-resistant speaker in the shower is so that you can leave your pod or phone outside the bath, dry and safe. But this is the first Bluetooth speaker I’d encountered that gives you some degree of the control you lose by not having the delivery device at hand. 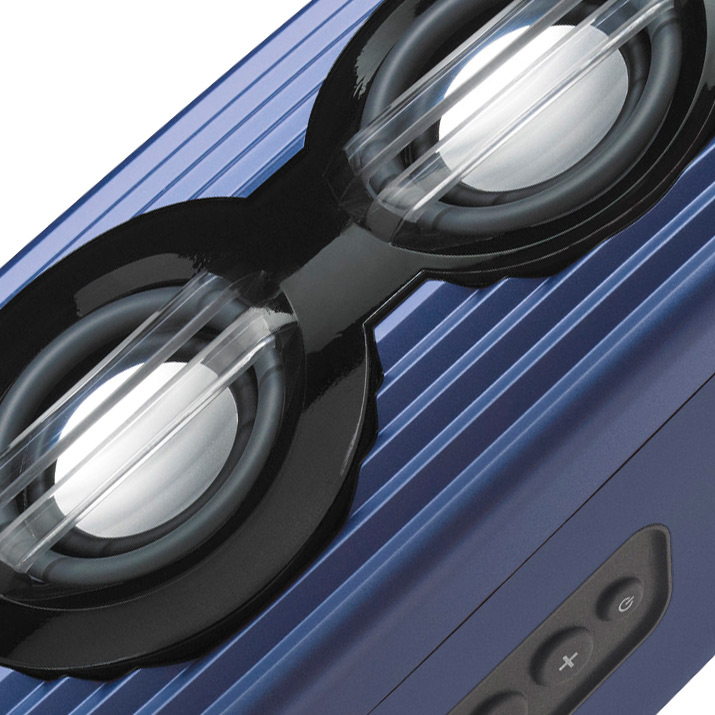 G-Project claims that the G-Go has a range of 33’ -- it certainly got that in my house, even with walls and doors in the way. Pretty amazing. This inexpensive speaker let me roam the house without any dropouts. That can’t be said for many other Bluetooth models I’ve tried.

The G-Go is water resistant, not waterproof -- unlike Grace Digital’s ECOXBT, it’s not submersible and it won’t float. But it seemed quite at home with ordinary shower splashes, and I imagine it would be comfortable in the rain. I wouldn’t take it to the beach -- the sand could get inside and cause a lot of harm -- but it should be fine on hiking trips, as a G-Project promotional video indicates. That video also shows the speaker being used horizontally in a car, but I think that standing it upright is the best position for it.

The batteries would come in handy on such a trip. I could gripe about not having a rechargeable battery, but if you’re going where there’s no electricity, it would be fine to just carry spare batteries and pop them in when you see that blinking LED. 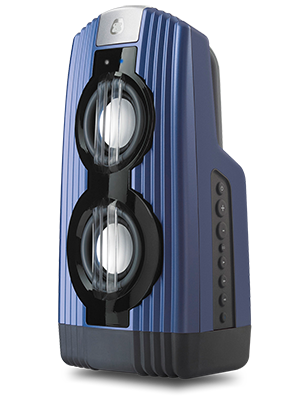 One of the first things I noticed about the G-Go was that it played loud, with enough power to fill a medium-size room. I could easily hear it over the sound of a shower. And working with my iPod Touch, its sound was relatively free of distortion: full, with good treble-to-bass balance. When I listened to the title song of June Christy’s Something Cool (16-bit/44.1kHz ALAC, Capitol), her voice predominated, but the supporting instruments had great body and presence. All that muted brass was a pungent contrast to her suave singing.

In the opening number of A Chorus Line (16/44.1 ALAC, Columbia), the footsteps and finger snaps were as crisp as I could want from a portable speaker. And when the music came in, it, too, had great presence and surprisingly good, focused bass. Of the G-Go’s four EQ settings, I found Flat to sound best regardless of the type of music; it produced the most neutral sound. For a small mono speaker at a very low price, the sound was quite good.

I found the G-Project G-Go to be just fine for use in the shower. Its sturdy design meant that I could pick it up by its built-in handle and take it just about anywhere.

The fact that the G-Go uses only nonrechargeable batteries will be a drawback to some, but it can be plugged into any wall outlet. And I appreciated the inclusion of basic Play/Pause and Skip Forward/Back buttons. The G-Go has plenty of volume and plays loud without excessive distortion. The only bad news is its warranty: a mere 90 days. Does this mean that a portable speaker costing $69.99 must now be considered “disposable”? It certainly seems built to last a lot longer than that.