JBL started its PartyBox lineup with the huge floorstanding PartyBox 300 speaker that I reviewed a little over a year ago. Since then, the company has added speakers of various sizes to the line, the latest being the PartyBox On-The-Go model, which is portable and can play from its internal battery without having to be plugged in. At $349.95 (all prices USD), it’s not inexpensive, but you get a lot for your money: a very good-sounding PA/disco/guitar/karaoke/party speaker with lots of neat features. 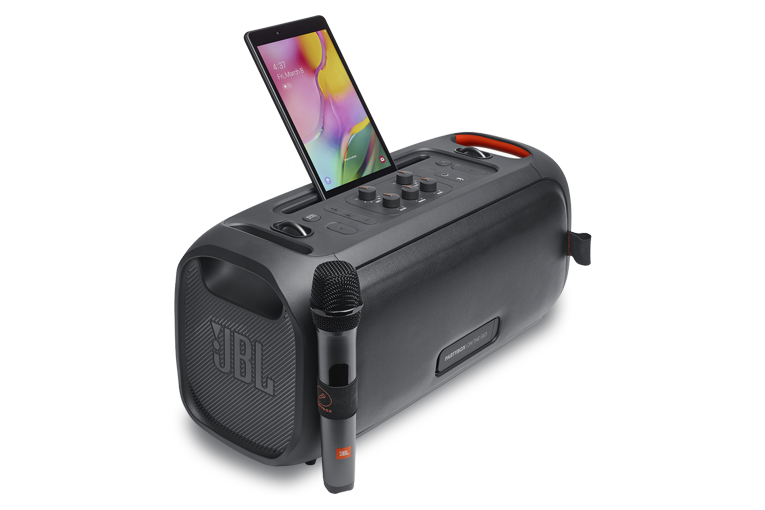 The JBL PartyBox On-The-Go arrives in a box that also serves as a shipping container: it’s a clever way to avoid having to open a box after you open a box. The only drawback is that your neighbors and passers-by can see what the courier has delivered to your front door. There are online services that will wrap a shipment so that it arrives anonymously, and this may be wise if you’re having this speaker shipped.

Inside the container, you’ll find the speaker nestled safe and secure in a Styrofoam compartment. In various other compartments, you’ll find an AC power cord, a wireless handheld microphone, two AA batteries, a microphone pouch, a padded shoulder strap (which includes a bottle opener), a quick start guide, a warranty card (one year, limited), and safety instructions.

To begin with, let’s address this unit’s size. It’s a whopper, weighing 16 1/2 pounds and measuring 19 5/16″ wide by 9 11/16″ high by 8 7/8″ deep. So yes, it is portable, but probably not for your four-year-old child. To aid the rest of us in moving it around, it has dual carrying handles on the top and clasps for attaching the included carrying strap. 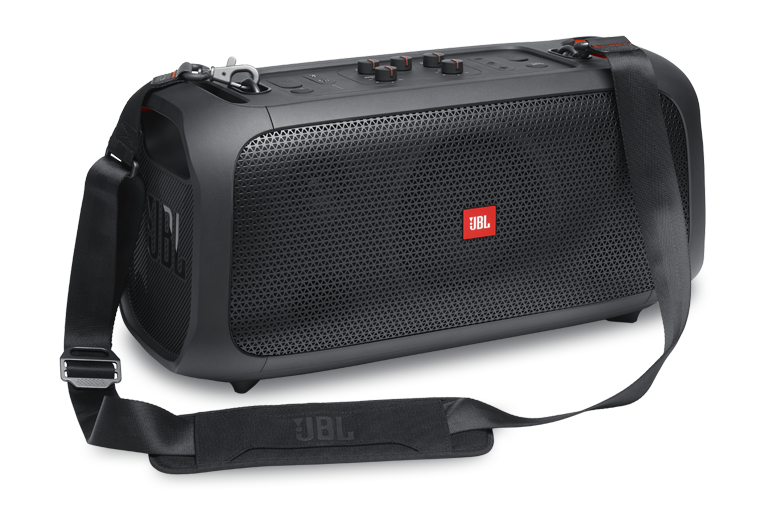 Cosmetically, the JBL PartyBox On-The-Go is an elongated rectangular box with bevelled edges and rounded corners. It is made of high-impact plastic with large grille areas on the front, bottom, and ends. The top has the aforementioned carrying handles molded into the design, and the bottom has four sturdy rubberized feet to keep the unit steady when it’s rocking out. A white-on-red JBL patch adorns the front; molded-in, raised JBL logos are found on the ends. The rear contains two elastic loops to hold microphones or other accessories.

All in all, the JBL PartyBox On-The-Go looks industrial and plain . . . until you turn it on and the color ring surrounding the 5 1/4″ woofer lights up. That’s a game changer! In addition to that large central driver, there are two 1 3/4″ tweeters. All three drivers are powered by a 100W RMS amplifier.

The speaker is rated IPX4, which means it is splash resistant, so all its input jack ports are covered with tethered rubber caps. The largest of these is found on the back, which, when opened, reveals the charging jack, a USB Type-A jack which does double duty for either charging your device or for playing back music from USB flash drives, and a 3.5mm jack for connecting devices that lack Bluetooth capability. 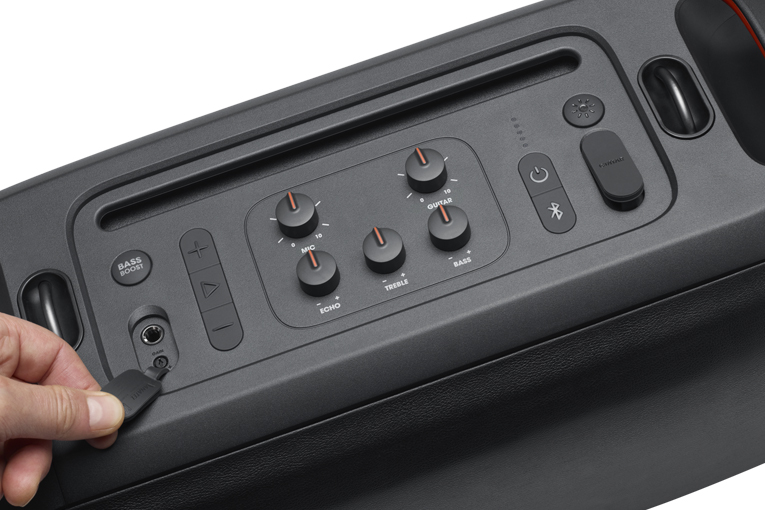 The rest of the ports and the controls are all on top of the unit where they are easy to see and use. There are ports for connecting a wired microphone and a guitar, as well as soft-touch buttons for powering on and off, Bass Boost, Bluetooth connection, and light show variations. There is also one long button for volume up and down, plus a multi-use central button for pause/play, skip forward, or skip backward. And if that weren’t enough, there are raised knobs to separately control the volume of the microphone and guitar and three knobs for Treble, Bass, and Echo effects. The only backlit buttons are the power button, the Bluetooth button, and the Bass Boost button. Five LEDs indicate the battery level. There’s also a slot for standing and holding a tablet or smart phone upright—useful if you are into karaoke.

The wireless microphone, which has a white-on-red logo at its base, measures 9″ in length, has a diameter of approximately 1 1/4″, and weighs 10 1/2 ounces. It requires two AA batteries to function and has a soft-touch on/off button and LED display to indicate which function is activated. 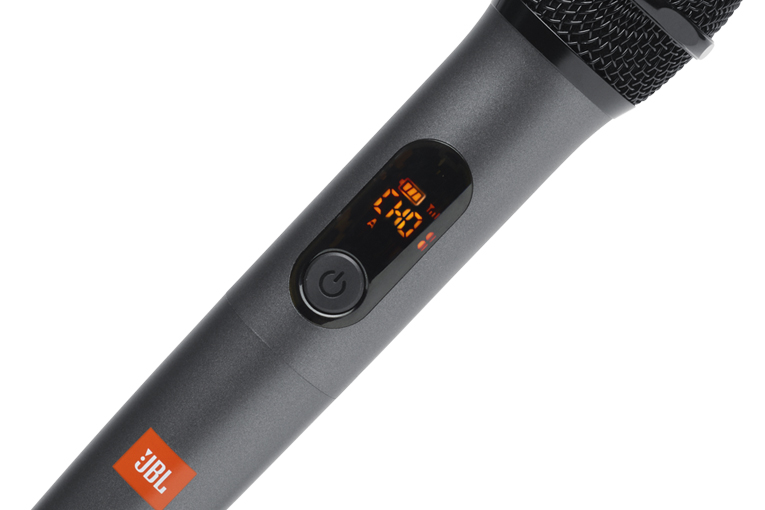 Two PartyBox On-The-Go speakers can be paired for stereo. The speaker uses Bluetooth 4.2, and JBL claims a battery life of six hours.

In a word, this speaker is fun! It’s the kind of audio toy you just can’t stop using once it’s out of the box and connected. First you plug in the AC cord, which will allow you to use it immediately while charging the battery. Then you pair it to your Bluetooth device, which in my case was instantaneous. Once you’re connected, you can use the two handles to position it where you want it and start rocking out. You can connect the shoulder strap, but my feeling is that this will only really work for those with broad shoulders. I certainly couldn’t carry it on mine. After all, it’s as heavy as two gallons of water.

I was able to verify that the USB port worked, both for charging my device and playing music from a FAT16- or FAT32-formatted USB thumb drive. The PartyBox On-The-Go will play main folders and subfolders in alphabetical order, main folders first then subfolders next. There is no way to choose which tracks you want to play from a connected USB drive. The JBL PartyBox app is not supported by this product. The auxiliary input allowed me to play music from an old non-Bluetooth CD player. 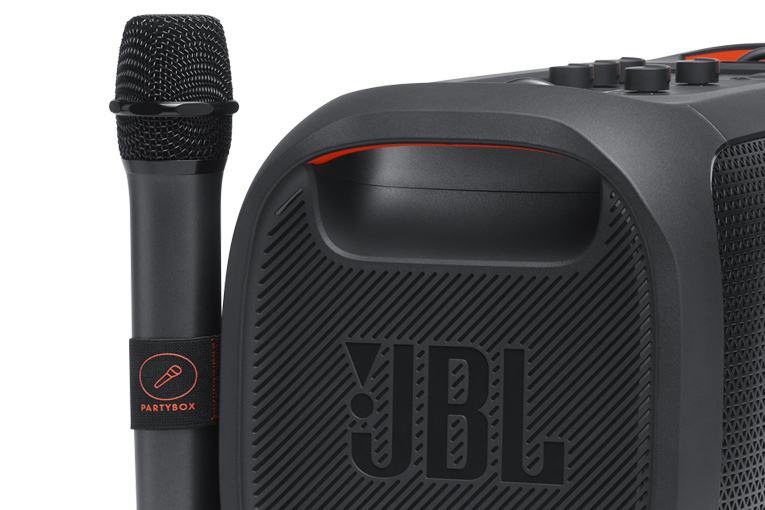 The included wireless microphone worked like a charm. It paired instantly with the JBL PartyBox On-The-Go and was fun to use. I could sing along to music and make announcements in between tracks while pausing the music. And the Treble, Bass, and Echo controls allowed me to get just the sound I wanted. The Echo control would be great for Halloween with some spooky sound effects playing in the background. That would surely get your trick-or-treaters’ attention.

The light show proved very effective and offered four choices: Rock, Neon, Club, and Off. I settled on Club, which caused the light to pulse, more or less in time with the music.

Though I prefer to control play/pause and skip from my phone or iPod, it is quite easy to do this from the speaker as well.

Now here’s where this speaker shines. Other high-output Bluetooth speakers that I’ve heard offer some of the features found on the JBL PartyBox On-the-Go, but few have comparable sound quality.

The midrange was warmish but still had great presence and definition. My opinion of the high frequencies largely depended on the recording I was listening to. On a well-balanced track—i.e., one that wasn’t bright—highs were sparkly and reproduced without any glare; however, a recording that was shrill to begin with could sound a little moreso over the PartyBox On-The-Go. I found this speaker exacerbated harsh highs just a bit. 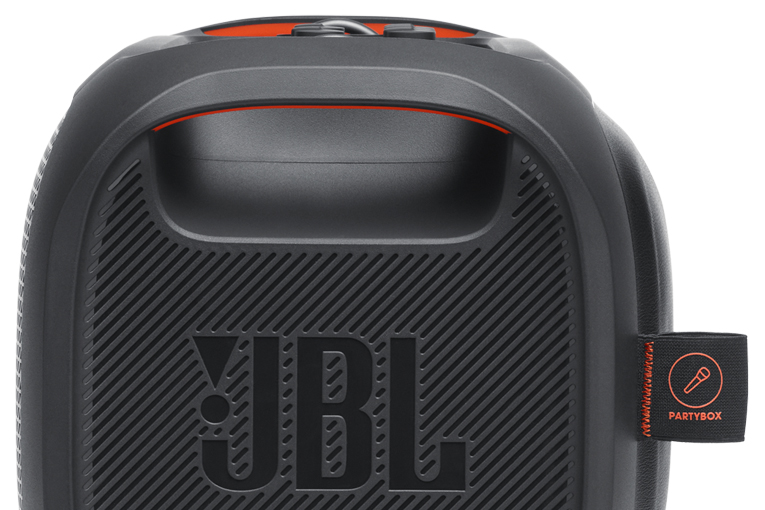 I tried it with rock music from the Rolling Stones, the Beatles, Duran Duran, and many others and found the bass highly palpable—the speaker was capable of reproducing bass I could feel, so it was good for dance music. The midrange provided tonally accurate vocals, and the treble sounds could be scintillating with their high level of apparent detail.

Since this review is being read in December, I decided to sample some Christmas-themed country music, with Garth Brooks picking “God Rest Ye Merry Gentlemen” on his Beyond the Season album (24-bit/96kHz FLAC, Capitol/Amazon Music HD). Here, the bass was solid as a rock and extremely well focused without the Bass Boost. Brooks’s distinctive voice came through loud and clear, so I could hear every nuance (and yes, I think he is a reasonably nuanced singer). Guitars and drums were in the background but had impressive presence, nonetheless.

The Japanese NHK Symphony Orchestra, under the leadership of Paavo Järvi, has established itself as world class. Their performances are thrilling, and you can prove (or disprove) this to yourself by watching many of them on YouTube. Järvi’s second recording of Mussorgsky’s Pictures at an Exhibition, with the NHK (the first one was with the Cincinnati Symphony Orchestra for Telarc), is simply a knockout (24/96 FLAC, Sony Japan Music International/Amazon Music HD). The second movement, with its snarling lower strings, spooky upper strings, and loud cymbal crash interjections would be quite a challenge for any speaker. The PartyBox On-the-Go proved up to the task. It didn’t have the absolute best definition, nor the transparency that an audiophile speaker would aspire to, but it did a heck of a lot better than you might expect. 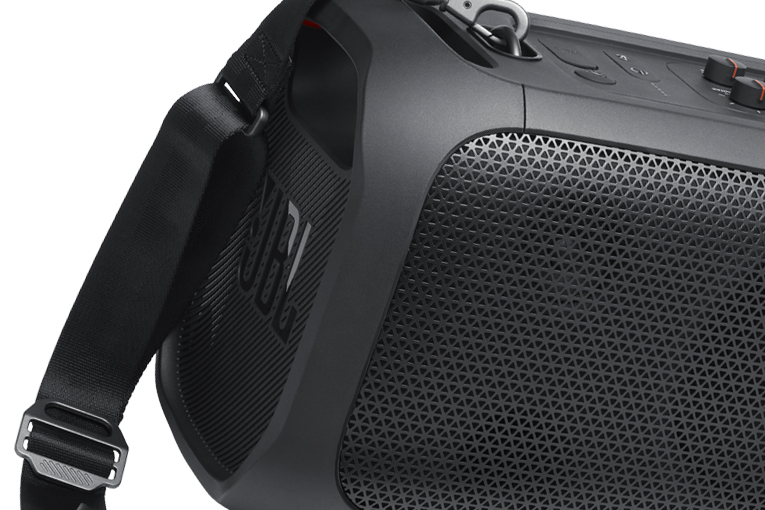 Want something quieter? How about some Haydn piano sonatas played by John McCabe (Haydn: Complete Piano Sonatas, 16/44.1 FLAC, Decca/Amazon Music HD)? McCabe plays these in a straightforward manner, crisp and clean, but never prissy. There’s ample warmth as well as clarity in his playing and the engineers captured it all in state-of-the-art sound. Once again, the JBL PartyBox On-The-Go surprised me with its versatility in reproducing this dramatic yet delicate music—the detail and overall clarity were impressive.

JBL advertises the PartyBox On-the-Go speaker as a “party animal” and it is that, but it can be so much more. For my money, it is one of the most versatile speakers on the market. You can just play it straight, or use the microphone for announcements or sing-alongs at your next party; you can plug in your guitar and play along for yourself or the crowd you’ve gathered. Since it has separate volume adjustments for the microphone and guitar, the mix of output levels is up to you. It has a dandy light show and is splash resistant. And it’s portable, though a bit heavy: you can carry it via the handles or use the included shoulder strap. You can also plug it into the wall and/or detach its cord and listen with the onboard battery providing the power. 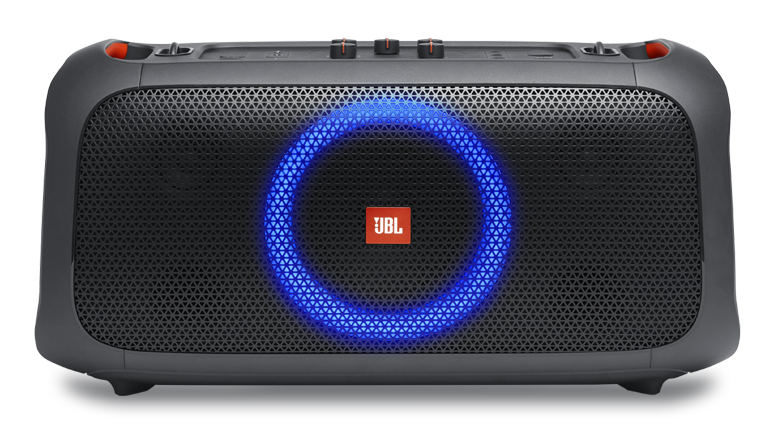 There’s absolutely nothing to dislike about this speaker, and a lot of obvious quality that makes its asking price seem reasonable. Football season is in full swing. Tailgate party, anyone? Maybe chill with some Haydn after the game?