NuForce Primo 8 measurements can be found by clicking this link. 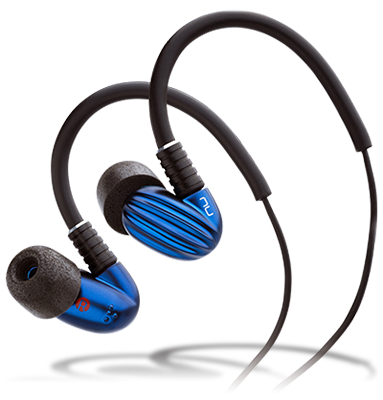 Ever had to buy cheap earphones when you were traveling because you broke the ones you had? If you have, you might wonder why some earphones cost $500 USD. I’ve bought several cheap sets of earphones over the years, and while a few were breathtaking in their suckitude, most were OK. The $9 set I got at a truck stop in Jennings, Louisiana, sounded shockingly nice -- a little bassy, perhaps, but quite listenable overall. And the amazingly neutral sound of the $15 Panasonic RP-TCM125 creams a lot of $100 models I’ve heard.

But there must be some reason audio enthusiasts buy $499 earphones like the NuForce Primo 8, right? There are. The Primo 8s have not one, but four drivers in each earpiece. These are not the dynamic drivers found in all inexpensive earphones, but balanced armatures. A dynamic driver is basically a miniature version of a conventional loudspeaker driver. A balanced armature is like a little motorized teeter-totter that drives a diaphragm. Balanced armatures are known for more extended, delicate, and airy treble, and, to some extent, for low tonal coloration -- although dynamic drivers, too, can have low tonal coloration, as proved by the Sennheiser IE 800.

Each earpiece of the Primo 8 has two balanced armatures for the bass, one for the mids, and one for the treble -- plus a tiny, first-order (6dB/octave) crossover that NuForce claims is a phase-coherent circuit (a patent is pending). All of this is packed into a distinctive little shell that makes wearing a pair of Primo 8s look as if a blue-winged beetle has flown into each ear.

But that’s not all, folks. The Primo 8s also have specially developed cables with a core of Kevlar and silk, an inner layer of silver conductors, and an outer layer of copper conductors. A built-in microphone with a Play/Pause/Answer button makes it easy to interrupt your listening with pointless phone calls. The cable is detachable, so you can replace it with whatever cable du jour is all the buzz on the headphone forums.

Does all this add up to $499 worth of sound? That’s what they pay me to find out. And, shortly, that’s what I’ll tell you.

Any $500 set of earphones should come with a wide variety of eartips. The fit has such a colossal effect that having just the right tip can make the difference between outstanding sound and mediocre sound. And silicone eartips cost next to nothing.

NuForce includes a great selection of eartips with the Primo 8 -- Comply foam tips in M and L sizes, and silicone tips in S, M, L, and XL -- as well as something really cool I can’t remember having seen before: two pairs of each size of silicone tip. If you damage your eartips, your spares are ready to go.

As usual, the package also includes: an 1/8-to-1/4” (3.5 to 6.2mm) adapter; a dual-mono-to-stereo adapter for use on 30-year-old, barely flying 737s and MD-80s with dual-mono headphone jacks; a cleaning tool/brush; and a microfiber cloth for shining up those blue beetle-wing things.

The only disappointment is the case, a flimsy little leatherette thing that looks more like something you’d get with $100 earphones.

As with most high-end earphones, the Primo 8s’ cables route behind the ears. This can be off-putting for some people at first, but trust me -- the more you use it, the more you’ll love it. It allows the earpieces to better fill and thus fit your ears, so you get better sound, better isolation from outside sounds, and better protection for the earpieces if there’s an accidental tug on the cable.

I take along on some form of transit every headphone or earphone model I test, to gauge its long-term comfort and isolation from outside sounds. The Primo 8s accompanied me on a one-day round trip by air between Los Angeles and San Francisco, and on a 90-minute round trip on Los Angeles’ Orange Line bus. In both cases, I found the comfort outstanding -- I fell asleep with the Primos in my ears on the way back from S.F. -- and the isolation excellent enough to isolate me from the chatter on the bus and block much of the engine noise of the Canadair CMJ200 jet. 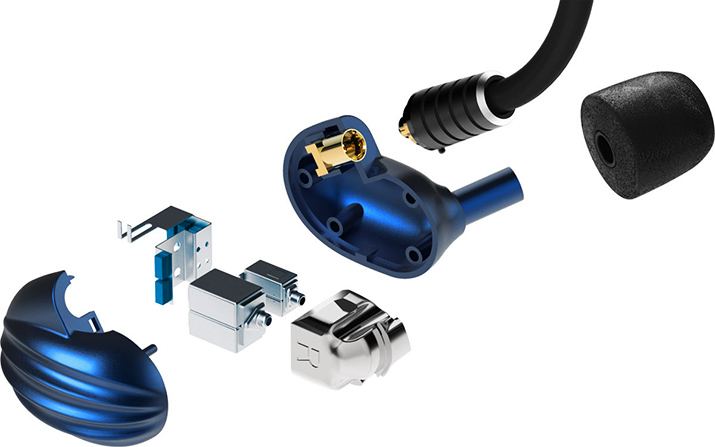 I used the Primo 8s with my iPod Touch, my Samsung Galaxy S III smartphone, and my Toshiba laptop feeding a Sony PHA-2 headphone amp via USB. I found the NuForces plenty sensitive enough to get loud volume from all of these devices. In my measurements, I found that the Primos’ tonal balance tended to shift when used with sources of high impedance (and, generally, low quality). This is a common problem with balanced armatures, whose impedance tends to vary greatly with frequency. Of course, you wouldn’t plug $499 earphones straight into a cheap laptop or a cheap MP3 player, but some exotic tubed headphone amps have fairly high impedance, too.

The Primo 8s had two ergonomic downsides. First, the slim cables feeding the earpieces tangled easily. Second and more important, the earpieces themselves are a tad bulky, which for me meant a lot of fussing and switching between the L and XL silicone eartips to get a perfect seal -- with anything less, the bass didn’t quite balance out and the treble was emphasized.

It was pretty obvious from my first listen that NuForce has tuned the Primo 8s with headphone enthusiasts in mind -- at $499, they’d be crazy not to.

A perfect example: “But Beautiful,” from The Gene Ammons Story: Gentle Jug (16-bit/44.1kHz ALAC, Prestige). This is an old-school, 1960s jazz recording with Ammons’s tenor sax recorded hard left, the drums hard right, and piano and bass in the middle. You might think this would sound lousy, but the recorded ambience is pretty incredible, the sound of the sax echoing off the studio walls (or perhaps through an old-fashioned acoustical reverb chamber). Through the Primo 8s, the soundstage was dramatic, huge, and enveloping -- far more spacious and realistic than I’m used to hearing through earphones. The Primo 8s completely nailed this cut, capturing all the body and spit in Ammons’s sound without exaggerating either; maintaining just the right left-to-right spread on the piano; and lending the cymbals and brushed snare a natural lushness and ambience, despite the fact that the drums were largely confined to the right channel. 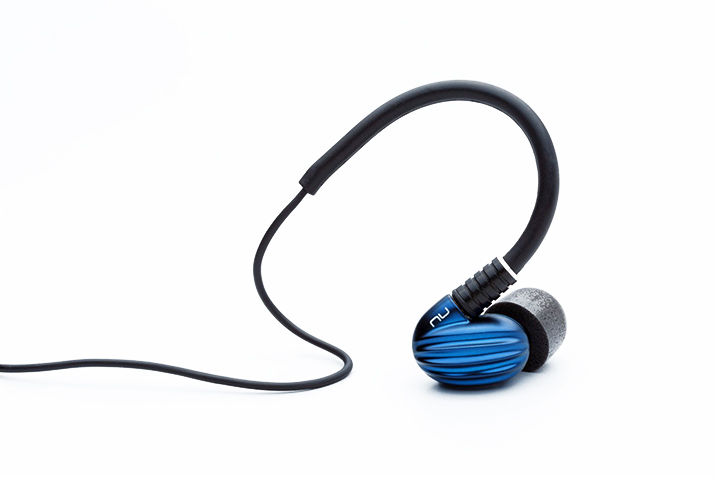 That’s also what I dug about the way the Primo 8s reproduced “May 1, 1990,” from Adrian Belew’s Here (256kbps MP3, Caroline). The chimes that begin this track sounded almost as ethereal as they would have through a pair of real speakers. Yet the snare was perfectly centered. The little cello licks that occasionally drop in were precisely imaged -- and embodied -- about a third of the way from the center to the right.

I even noticed a new, previously undetected (at least by me) sense of spaciousness in “Nix,” from Dawn of Midi’s fantastic Dysnomia (256kbps MP3, Thirsty Ear). It’s such a simple recording: a piano-bass-drums trio performing highly rhythmic, EDM-style music live in the studio. Through the Primo 8s, “Nix” and the other tunes on Dysnomia took on new drama, sounding more ambient, more driving, more urgent, more awesome. That was due in no small part to what I considered the Primo 8s’ practically perfect bass response: tight when it needed to be, fat and powerful when it needed to be that.

More incredible was the wonderful hugeness of “Nightmares,” from Band of Skulls’ Himalayan (256kbps MP3, +180 Records). The overdubbed rhythm guitars and keyboards sounded as if they were echoing off the walls of a 5000-seat concert hall. Russell Marsden’s lead vocal sounded as if he was in my living room, while Emma Richardson’s backing vocal sounded as if it was filling a small performance space. It’s obvious that the band put a lot of effort into getting the layering of the reverb just right on this track, and through the Primo 8s, I heard every last microecho.

How to precisely gauge recorded spaciousness? Simple -- play “Four Surround Voices: Test,” from Dr. Chesky’s Ultimate Headphone Demonstration Disc (16/44.1 FLAC, Chesky). The four voices -- one front left, one rear left, one rear right, one front right -- weren’t placed any differently from their positions as I heard them through the Audiofly AF140 earphones, which I recently reviewed; I just got a bigger, more natural sense of the space in which this binaural recording was made. 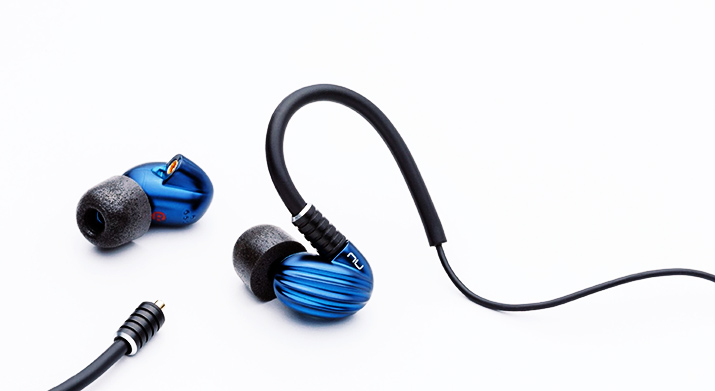 I haven’t yet said anything about the Primo 8s’ coloring of voices. I guess that’s because it was so minimal I didn’t notice it. Even voices that are almost impossible to reproduce, like the rich baritone of Reverend Dennis Kamakahi on “Kaua‘i O Mano,” from his Pua‘ena (16/44.1 WAV, Dancing Cat), sounded practically unaltered. Most headphones, of any type, tend to bloat Kamakahi’s voice and often make his slack-key guitar sound boomy. Not the Primo 8s. Not one bit. Kamakahi sounded full and deep but completely clear, and without any resonances other than his own natural ones. And Holly Cole’s alto in “Viva Las Vegas,” from her Night (16/44.1 WAV, Tradition & Moderne), had no trace of the sibilance most other headphones give her.

Again, I stress the importance of getting a good fit with these earphones. After the first few days of listening, I’d planned to give the Primo 8s a lukewarm review, dinging them for excess energy between about 2 and 4kHz. I had the XL eartips in, and they seemed to give a perfect seal. But after hearing how overemphasized the snare, ride cymbal, and shekere (gourd shaker) sounded in “Lucky Southern,” from Brazilian percussionist Airto Moreira’s Free (256kbps MP3, CTI), I started messing around with other tips. I finally got the Primo 8s to sound like they’re supposed to by using the L eartips (smaller than the size I usually use) and taking great care to seat them in my ear canals, pushing them around slightly until I was assured that the seal was perfect. I know -- it’s always important to get the best possible fit with earphones -- but with the Primo 8s, it took a lot more effort than usual. But maybe that’s just my ears. Who knows?

The NuForce Primo 8s are flat-out great earphones. Yeah, $499 is a lot to pay for in-ears when you can get quite a nice set for $150 or so. But I think anyone who cares about audio will appreciate the Primo 8s’ practically perfect bass, ultraclear midrange, uncolored treble, and -- most of all -- awesome sense of space. But make sure you get the right fit. If you hear these at a hi-fi show and aren’t impressed, they ain’t fittin’ right.