NAD Viso HP50 measurements can be found by clicking this link. 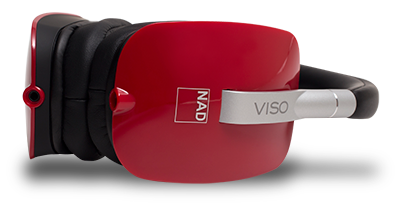 New Acoustic Dimension, aka NAD, is a brand well known to audiophiles. Beginning in the late 1970s with the 3020 integrated amplifier, the once-British, now-Canadian company has developed a reputation for solid-performing, high-value electronics. Like many other manufacturers, NAD is now moving beyond its traditional two-channel audio and home-theater products to address, with its Viso products, the booming market of compact desktop and personal audio gear. A recent addition to the range are the HP50 headphones ($299 USD).

Why is an electronics company making headphones? NAD is part of the Lenbrook Group, which also includes loudspeaker manufacturer PSB. The HP50 shares its DNA with PSB’s well-regarded M4U 1 and M4U 2 headphones, which designer Paul Barton developed using the resources available at Canada’s National Research Council.

While PSB’s M4U 1 and 2 headphones look identical, save for the switch on the 2 to engage its active components, the HP50s differ from them in both shape and construction. Rather than the bulbous earcups of the PSBs, the NADs have fairly flat, oblong enclosures. The earcups of my review pair were gloss-white plastic; black and red are also available. A sturdy-looking piece of metal connects each earcup to the headband, and slides in and out with click stops that are just right: neither too loose nor too tight. The assembly allows for a moderate amount of tilt in the vertical axis, as well as horizontal rotation. The HP50s’ earcups also swivel completely flat for stowage in the included leatherette pouch, or for slipping neatly into a laptop bag. 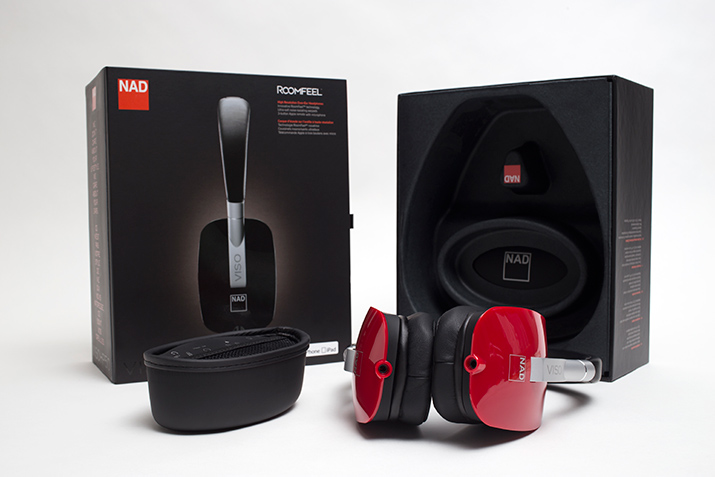 The foam used for the earpads and headband is fairly soft, and both are covered by a supple protein leather. At 2.625" x 1.5”, the HP50s have room for larger ears than do either the Bowers & Wilkins P7s or the Focal Spirit Classics. I found them very comfortable, with sound isolation on a par with their competitors.

NAD rates the HP50s’ frequency response as 20Hz-20kHz, +/-1.5dB. Presumably, that window is in relation to some target curve -- headphones that actually measured flat would probably sound odd. Absent from the website and the box is any statement of sensitivity, but I found it to be similar to that of the P7s and Spirit Classics; the HP50s will play plenty loud driven directly from an iPod or iPhone. Other specifications are an impedance of 32 ohms, a maximum power handling of 30mW, and distortion of 0.25% (no input specified). 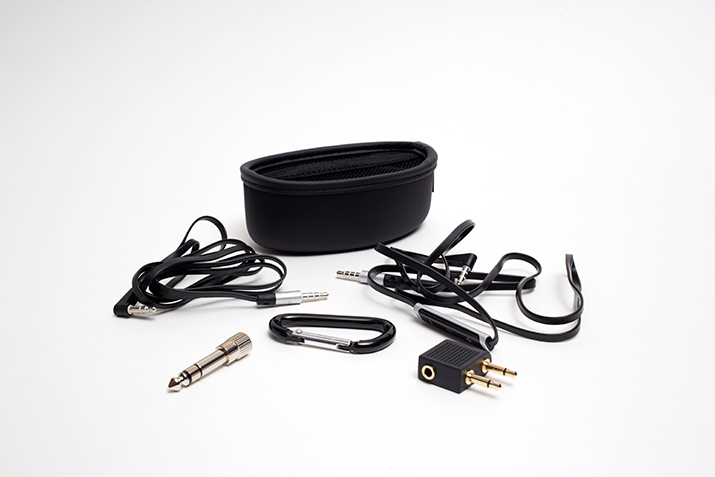 The HP50s come with two 48” cords. One of these has a microphone and a three-button remote for iDevices; the other is a simple stereo cord. Carried over from PSB is the useful ability to plug the cable into either side of the headphones, to give it a straight shot to the source. Standard 1/4” and airplane adapters are included.

Like the PSB M4U 2s, the NAD Viso HP50s’ frequency response is free of the substantial peaks and troughs that color the sound of most -- especially closed-back -- headphones, though they do have a touch of emphasis in the upper midrange that adds presence to voices. I’ve listened to Alison Krauss and Union Station through every component I’ve reviewed over the past decade, and the HP50s reproduced Krauss’s sweet, breathy tone and Dan Tyminski’s nasal twang on Paper Airplane (24-bit/96kHz FLAC, Rounder/HDtracks) much the same way I’m accustomed to hearing them through a pair of neutral loudspeakers. Likewise, in “Bird on the Wire,” from Leonard Cohen’s Songs from the Road (16/44.1 FLAC, Columbia), the HP50s made apparent the extra bass that Cohen adds to his voice by singing very close to the microphone, without blowing it out of proportion. 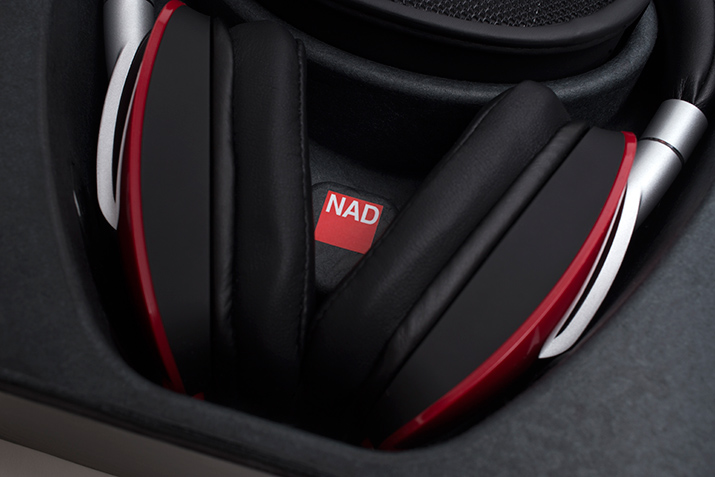 Songs from the Road led me to Renée Fleming’s cover of Cohen’s “Hallelujah” on her Dark Hope (256kbps MP3, Decca/Amazon), where the HP50s brought out the rich complexity of Fleming’s golden voice. They also left her glorious soprano free to soar in the title role of Massenet’s Thaïs, with Yves Abel conducting the National Bordeaux Aquitaine Orchestra (CD, Decca 289466766 -2), and portrayed the depth and resonance of Thomas Hampson’s baritone, on the same recording, without undue chestiness.

While natural reproduction of the human voice is crucial for any audio component, the HP50s could appropriately depict a much wider timbral palette. During the time I was reviewing the NADs, I was also trying out Orastream’s Classical! HD app, which advertises up to CD-resolution streaming of a substantial catalog. One of the pieces I discovered was Béla Bartók’s ballet The Wooden Prince, in a recording by the Bournemouth Symphony Orchestra conducted by Marin Alsop (16/44.1, Naxos), and the HP50s were a great vehicle for that discovery. They did a creditable job of conveying the sounds of all the usual orchestral instruments, from double basses to piccolo, as well as calling out some of the additions -- like saxophones and celesta. In “Dance of the Princess with the Wooden Doll,” the percussion instrument used to represent the doll did have a distinctly wooden quality. 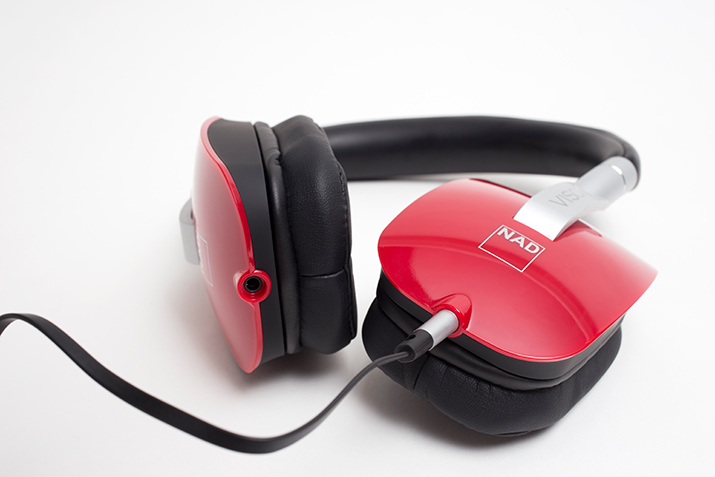 The premise behind NAD-PSB’s RoomFeel technology, which all their models incorporate, is the recognition that a loudspeaker that measures flat in an anechoic chamber will exhibit a rise in the bass when placed in a normal room; headphone designers need to account for that bass lift in order to make recordings balanced for playback through speakers sound right. Most impressively for a closed-back design, the HP50s’ bass was very even and articulate. Notes in Ray Brown’s bass lines in the Oscar Peterson Trio’s Night Train (24/96 FLAC, Verve/HDtracks) were equal in volume, with a firm pluck at the beginning, a definite pitch, and no boom or overhang.

With the right recordings, the HP50s’ clean, extended bass helped to establish a palpable sense of space. Listening to the Bergen Philharmonic Orchestra’s recording of Prokofiev’s Lieutenant Kijé Suite, conducted by Andrew Litton (24/96 FLAC, BIS/e-classical), I could hear notes from the double basses fading into the acoustic of the hall more clearly than through most other headphones; bass drum and timpani also had room in which to breathe. Nor was the sense of space restricted to classical recordings. Jon Hassell’s “Amsterdam Blue,” from the soundtrack to The Million Dollar Hotel (16/44.1 FLAC, Island), is a slow improvisation of very close-miked trumpet against a backdrop of fat electric bass. A significant amount of reverb is used to set the mood, and the HP50s put me into that artificially created ambience. 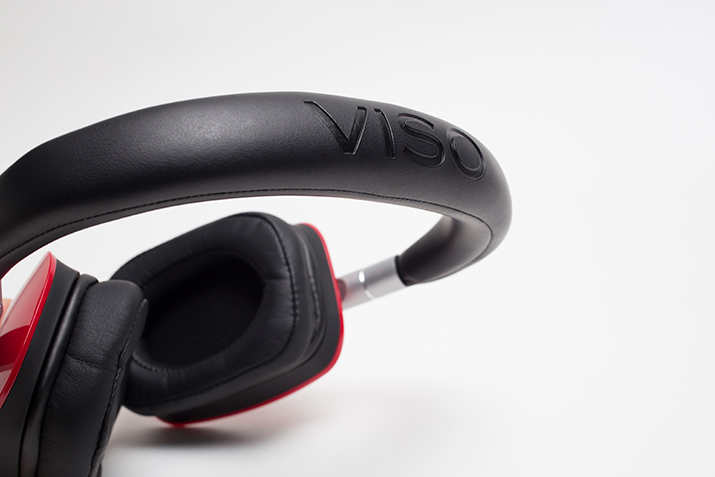 But while the NADs reached low enough to represent the throbbing synthesizers in Massive Attack’s Heligoland (CD, Virgin 5099960946621), and the pedal notes in Jan Lehtola’s recording of Kalevi Aho’s Alles Vergängliche -- Symphony for Organ (24/96 FLAC, BIS/e-classical), they didn’t have the authority of the Focal Spirit Classics or the B&W P7s. Similarly, John Robinson’s kick drum in “Lose Yourself to Dance,” from Daft Punk’s Random Access Memories (24/88.2 FLAC, Édition Studio Masters Columbia), had a firm attack with plenty of drive through the HP50s, but lacked some of the weight I heard through the other ’phones.

At the other end of the audioband, the NADs, like many of their competitors, took a relaxed approach that made them friendly to a wide variety of recordings. “Anarchy in the USA” -- Tito Larriva and the MDH Band’s Spanish-language cover of the Sex Pistols’ “Anarchy in the UK,” also from The Million Dollar Hotel  soundtrack -- sounded appropriately obnoxious, but wasn’t nearly as fatiguing as such heavily compressed tracks can sound with a tipped-up or even neutral high end. My usual example of an early digital remaster, the 1990 edition of Sade’s Diamond Life (CD, Portrait RK39581), didn’t completely hide its flaws but was entirely listenable. As usual, the cost for the HP50s’ forgiving treble was a curtailing of instruments’ upper harmonics; the timbre of Jerry Douglas’s Dobro on Alison Krauss’s Paper Airplane wasn’t as complex as in real life. 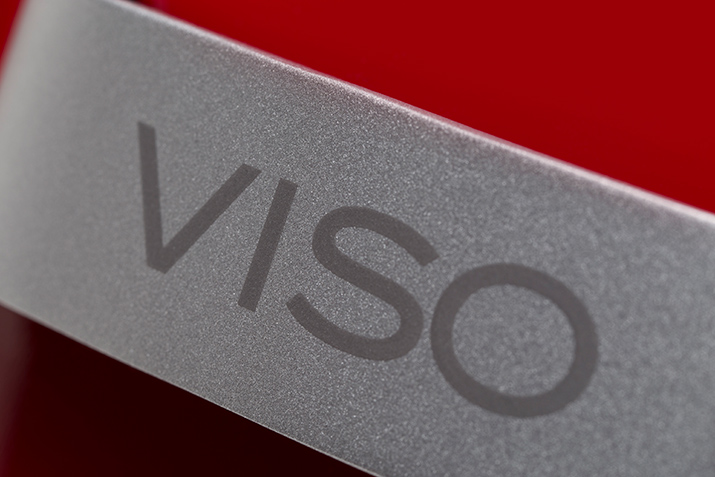 Despite their subdued top octave, the HP50s did an excellent job of rendering transients. The banjo and guitar parts in Paper Airplane were clear and articulate, with no added zing or hash. Pizzicato notes in Prokofiev’s Lieutenant Kijé also popped cleanly enough that I could hear some of their subsequent decay.

One obvious question is how the NAD Viso HP50s compare with their PSB cousins. I didn’t have a pair of M4U 1s ($299) on hand, so my comments are based on the M4U 2s ($399) in their passive mode. (The M4U 2s also offer an active mode -- essentially, a built-in headphone amplifier -- and active noise canceling.) The NADs’ design is sleeker than that of the PSBs. The additional bulk of the M4U 2s’ earcups is probably necessary to accommodate the batteries and active circuitry, but the M4U 1s share the same form. Although the PSBs’ earcups fold up into the headband for compactness, the NADs’ fold-flat design is better for fitting into some bags.

There were also differences in their sounds. The M4U 2s aren’t as forward as the HP50s in the upper midrange, leaving the PSBs sounding a little warmer overall. Voices sounded equally believable through either pair of headphones, but had a little extra presence through the HP50s. Whether due to the difference in frequency response or not, the NADs were a little more detailed than the PSBs. In Yevgeny Sudbin’s recording of Beethoven’s Piano Concerto No.3 and Mozart’s Piano Concerto No.24, with Osmo Vänskä conducting the Minnesota Orchestra (24/96 FLAC, BIS/e- classical), through the HP50s I heard more of the piano’s hammers striking the strings, as well as the notes’ decays, than I did through the M4U 2s. Notes from the double basses and timpani were more cleanly defined through the NADs, but the PSBs’ slightly higher bass output gave a more pleasing orchestral balance. Likewise, the electric-bass and kick-drum parts in Random Access Memories had better definition through the HP50s, but sounded fuller through the M4U 2s.

Other likely competitors are the Focal Spirit Classics ($399). They’re bulkier than the HP50s, but the Spirit Classics’ rounder earcups offer significantly less room for larger ears. As with most headphones, the Focals’ replaceable cord can be fitted only to the left earcup, but unlike any similar headphones I’ve reviewed, the remoteless cable is a home-friendly 13’ long, and a thicker gauge.

The Spirit Classics sound noticeably warmer and more laid-back than the HP50s. Their bass is fuller, with greater impact, but isn’t quite as linear or as tightly controlled as the NADs’. At the top end, neither pair of ’phones had extreme extension or airiness. The HP50s sounded a little more open, but the Spirit Classics’ treble is silkier.

Though the NADs’ extra presence helped them uncover more details than the PSBs, the Focals were equally adept at reproducing the breathiness of Alison Krauss’s voice and the grit and gravel of Leonard Cohen’s. Like the HP50s, the Spirit Classics clearly delineated the attack of each note from Sudbin’s piano, but with a richer tone than the NADs. The HP50s produced more tightly focused center images and a bigger overall soundscape, but the Spirit Classics were a bit better at elucidating depth relationships.

The one area where the Spirit Classics held a distinct advantage over the HP50s was in macrodynamic contrasts. The NADs had no trouble playing loud, but the Focals swing from soft to loud with a greater sense of ease. For those who mainly listen to modern pop and rock -- recordings that are often dynamically compressed -- this difference will be of little relevance.

Knowing that the NAD Viso HP50s were designed by Paul Barton, I had high expectations for them. I wasn’t disappointed. Their tonal balance is close to neutral, with a little extra upper midrange that highlights the crucial vocal band. Their bass is extended, even, and articulate -- though some listeners will doubtless want more of it. While no closed-back headphones will sound as open as an open-back design, the HP50s sound more open than most. Most important, they communicated the music without ever doing anything to distract from it.

With their combination of dependable-looking build quality, reasonable price, and strong marks in all areas of sound reproduction, the Viso HP50s carry on the NAD tradition of solid performance and high value.