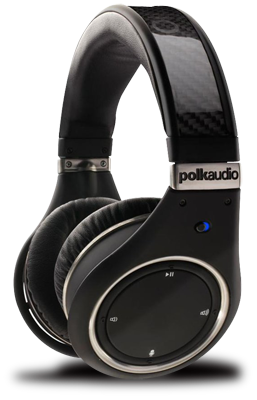 Commuter headphones just keep coming -- sometimes it seems that everyone wants in on this market. Polk Audio is a relative newcomer, yet not totally unproven in the field -- they currently offer nine models. I reviewed their UltraFit 2000 sports headphones last February and found them excellent.

Now Polk has come up with its first active noise-canceling headphone, the UltraFocus 8000 ($349.95 USD). It was no surprise to me that these headphones sounded better than any of the others I’ve reviewed in the past few months -- or perhaps they sounded good because they sound more like floorstanding loudspeakers than typical headphones.

The UltraFocus 8000s’ box is similar to the packaging of other headphones I’ve seen lately. Two sides open out to reveal a sturdy carrying case. Inside that are the UltraFocus 8000s, their earcups folded 90 degrees and laid flat. Under them is a red cover that proclaims Polk Audio Accessories. Lift up on the ribbon to find: a flat, tangle-free cable; adapters (all gold-plated) for 1/8"-to-1/4” plugs, Nokia and Skype connections, and airline audio systems; and an external attenuator, a shirt clip, two AAA batteries, a Quick Fit Guide, an owner’s manual, and card instructing you how to register the product online. Attached to the case is a loop that can be used to attach it to luggage. A zippered net for carrying extra batteries or connectors is attached to the inside of the case with Velcro.

The black-and-chrome UltraFocus 8000s measure 7"W x 7.6"H x 3.5"D and weigh about 12 ounces with the batteries installed in the left earcup, to the bottom of which the audio cable attaches. The ear cushions are replaceable.

The controls are all on the outside of the right earcup, arranged around its perimeter. At 12 o’clock is the Play/Pause/Skip Forward/Back control; the four functions are activated depending on how many times you push it. At 3 and 9 o’clock are the up and down volume controls. At 6 o’clock is the Push to Hear control (explained below). The buttons were easy to find and use; after only a single session, my finger instinctively moved to the right places, and the controls engage with a solid ka-lunk, to let you know you’ve actually made a change. Just above the right earcup is a slider On/Off switch. When the ’phones are turned on and the battery is strong, a blue LED under the switch glows steadily blue; when the batteries need to be replaced, the LED alternates red and blue.

Polk lists the UltraFocus 8000s’ drivers as being 40mm (1.5”) Dynamic Balance units made of polyethylene terephthalate (PET), with a frequency response of 8Hz-28kHz, a minimum sensitivity of 110dB, and an impedance of 100 ohms.

The build quality of the UltraFocus 8000s is exemplary, right down to the beefed-up connection of audio cable to earcup. The ’phones feel solid and well built, and fit comfortably on my head thanks to the headband’s malleable padding, but the fit will vary from person to person. My only complaint is that my ears and head got hot when I wore the Polks longer than 15 minutes. 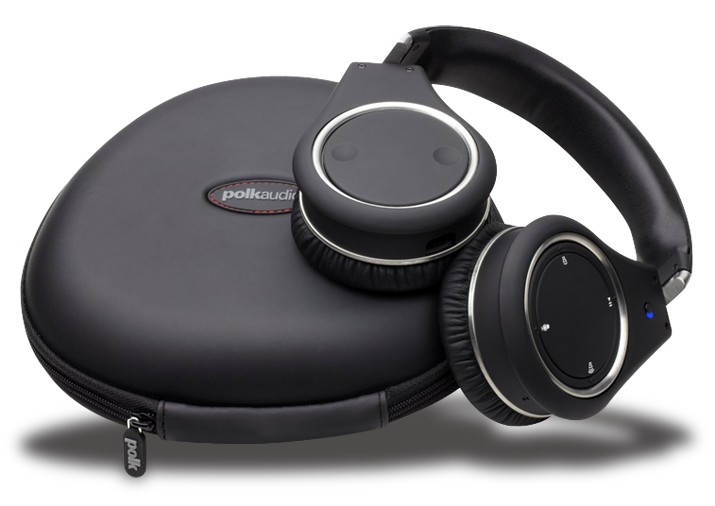 The UltraFocus 8000s differ from most other headphones in using replaceable instead of rechargeable batteries, which I’ve found seldom provide more than 8-10 hours of listening. Polk promises 40-60 hours from the batteries. I’ve been running the Ultra Focus 8000s for over a week -- I even forgot to turn them off one night -- and am still getting a steady blue glow from the LED. To install the batteries, you remove the cover of the left earcup by grasping it at the two finger indents, twisting it a little way, and turning it upside down: the cover will fall out. The cover is tethered to the headphone -- you won’t lose it -- and the tether also makes battery removal a snap.

The Polk 8000s are optimized for use with iPhones, iPods, and iPads, all of which they partnered perfectly. When you change the volume on the ’phones, the slider view on the iDevice you’re using also changes. This means that you can easily see how much of the Polks’ available volume range you’re using -- 75%, 50%, whatever. You can also adjust the volume from your Apple device.

The UltraFocus 8000s’ active noise-canceling circuitry is always on -- you can’t turn it off and still listen to music. The Push to Hear button dims the music so you can hear conversations around you, and seems to let through unscathed only sounds that encompass the frequency range of the human voice. Lower-frequency sounds, such as motors and the drone of airplane engines, are still reduced in volume.

As for the active noise canceling, Polk states that they’ve used special circuitry to ensure that their 15dB of external noise reduction can be accomplished without disturbing the sound. I found the Polks exceptionally quiet. With the volume all the way up and no music playing there was no hiss, just complete quiet -- though they did pick up noise generated by other electronics. I heard a buzz while sitting at the computer, and finally identified the problem as my Hewlett-Packard widescreen monitor. I roamed the house and heard nothing from the Polks but absolute quiet, even when near the audio components of my home theater -- but not near this monitor.

Since the UltraFocus 8000s are optimized for iPods, I did my listening tests using my iPod Touch and iPod Nano. All of the files I have on these devices are Apple Lossless for CD quality (no MP3s). I set the device EQ to Flat.

Overall, the UltraFocus 8000s exceeded any expectations I may have had. Of all the headphones I’ve used recently, the Polks won hands down for sound. The highs were clean and crisp, the midrange nicely transparent, and the bass very focused. In fact, I suspect that it will be the Polks’ bass that most listeners will notice first. It was solid and relatively deep, but not to the point that it made my jazz recordings sound like disco. When there was bass on the recording, the UltraFocus 8000s reproduced it as intended, without gross frequency-response aberrations. My overall impression was that the 8000s sounded more like neutral loudspeakers than any headphone in this class that I’ve heard -- which is perhaps not so surprising, given Polk’s long and successful history of manufacturing high-quality loudspeakers.

“Rolling Home,” which kicks off Peter, Paul and Mary’s Album 1700 (16/44.1 ALAC, Warner Bros.), showed off the 8000s’ transparency. Each of the three voices can be heard on its own, or as part of the harmonies they create together. Guitar, bass, and drums supported the vocals in perfect balance.

“Une Nuit à Paris,” from 10cc’s The Original Soundtrack (16/44.1 ALAC, Mercury/Mobile Fidelity Sound Lab), is much more complex than the PP&M track -- almost a miniature rock opera, with its verbal asides, arias, and full-band sections alternating at a dizzying pace -- but everything was clean and clear through the UltraFocus 8000s. I heard no muddying of the sound whatsoever, and the balance of frequencies remained very neutral overall.

The recording of Rimsky-Korsakov’s Scheherazade by Ernest Ansermet and the Suisse Romande Orchestra (16/44.1 ALAC, Decca) is one of the best orchestral recordings in the catalog, though it’s now more than 50 years old. The last movement offers a dazzling array of percussion and trumpet effects (it’s no surprise that the composer wrote one of the best books on orchestration). The orchestra provides a solid sound with well-defined bass, including the double basses and bass drum, and the sounds of the upper percussion -- triangle, snare drum, cymbals -- are crisp yet natural. 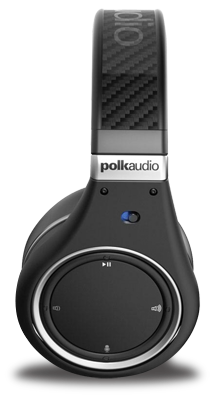 Through the Polks I heard this as a clear, balanced sound that was lively yet unforced. The same orchestra and conductor recorded my favorite version of Mussorgsky’s Pictures at an Exhibition (16/44.1 ALAC, Decca), to the finale of which Ansermet adds an organ. Its roaring low-pedal tones sounded as uncolored through the Polks as I have ever heard them over headphones.

The only headphones I’ve heard that can compete with the UltraFocus 8000s are the Logitech UE 9000s ($399 USD). These will operate wired or via wireless Bluetooth, run on a rechargeable battery, and come with a two-year warranty. They sound very good, but the Polks are in a different class. The Logitechs’ noise-canceling seems a bit more aggressive than the Polks’, which is perhaps why the UE 9000s come in a second in sound. But either model will beautifully reproduce your music while subduing extraneous sounds.

Polk Audio’s UltraFocus 8000 active noise-canceling headphones offer much. They sounded better than any of the commuter headphones I’ve auditioned, and are easy to operate. They’re smartly and simply designed, with superior build quality. Unlike most other headphones, they’re powered with replaceable AAA batteries. My only complaint is that they got hot, but that might not happen to you. Since the ear cushions are replaceable, perhaps Polk will come up with a different material for thermally sensitive folks. Still, the Polks are clear winners that should find many fans -- particularly those who appreciate a good set of floorstanding loudspeakers.